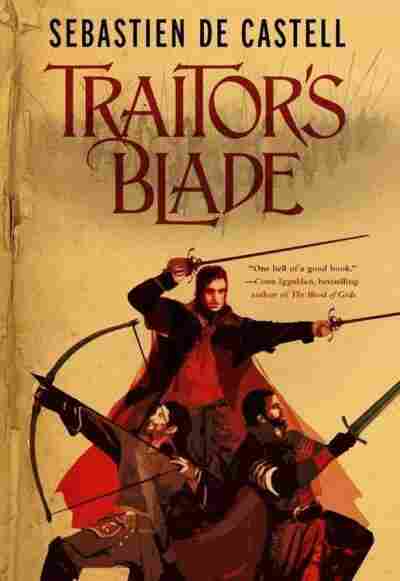 When fantasy has gotten so grim and dark that the term "grimdark" has been coined to describe certain authors, things may have gone slightly overboard. With Traitor's Blade, the first installment of a new fantasy series called the Greatcoat Quartet, author Sebastien de Castell seems to be taking a stand against the grimdark wave. Unlike the bleak, bloody work of George R.R. Martin and Joe Abercrombie, Traitor's Blade is a swashbuckling romp packed with charisma, camaraderie, quick wit and even quicker swordplay. That said, it's far from candy-coated — and it packs some serious substance.

Similarly to Martin's and Abercrombie's books, Traitor's Blade is set in a fictional, pseudo-European world. The big difference is the timeframe. De Castell skips past the trappings of medieval brutality and lands his story in a less hopeless realm, one that resembles a cross between Renaissance France and Italy. The world is in political turmoil thanks to petty, warring dukes, and life is none too easy. But the most recent king extolled the virtues of enlightenment and the rule of law. Granted, those virtues got him deposed and murdered, but they at least exist. And the enlightened ideal lives on, albeit with plenty of faults, in the form of Falcio val Mond.

The former leader of the elite guard known as the Greatcoats — sort of a swashbuckling cross between Jedi Knights and samurai who brought justice and fairness to the countryside — Falcio is now severely out of favor after the death of his king. His two best friends, Kest and Brasti, are also erstwhile Greatcoats; they've been reduced to taking menial jobs as mercenaries, which eventually sucks them back into the same devious political intrigue that first turned them from protectors to pariahs.

If it all appears to be an homage to The Three Musketeers, that's because it is — at least partly. De Castell makes no secret of his love of Alexandre Dumas' most famous work, right down to Traitor's Blades' trio of bantering, chivalrous swordsmen, not to mention a sly nod to the Man in the Iron Mask. But it goes beyond pastiche. The trappings of fantasy take sharper shape as the book moves briskly along. Magic starts to play a larger role — magic that includes a mythical creature called the Fey Horse, which manages to tap into the compassion and pathos of Peter S. Beagle's classic The Last Unicorn.

Still, darkness is served up deliciously in Traitor's Blade — only de Castell uses it as the sauce, not the soup. Falcio's tragic past, particularly the death of his young wife years ago, is as wrenching as anything in A Song of Ice and Fire. And the fate of the last Fey Horse is no less harrowing, something that taps into the horrors of extinction and genocide in a way that soundly grounds the book's lighthearted tendencies.

What makes the book truly sing, though, is its rich historical backdrop. The world of Traitor's Blade sits on the cusp of a new age, one where society must evolve into something less barbarous or perish at its own hand. Paradoxically, there are technological achievements starting to influence society, including guns — which are only just beginning to render the daring skills and codes of honor of sword-wielding Greatcoats like Falcio obsolete.

De Castell's fight scenes are as sumptuously detailed as the world Falcio inhabits. But after a while it becomes painfully clear that the author — who choreographs swordplay for the stage — lingers a little too long on the minutiae of the rapier. At the same time, he frequently interrupts his most pulse-accelerating action scenes with huge blocks of daydreaming or exposition, which kills the momentum he otherwise so masterfully builds.

Being the first in a four-book series, Traitor's Blade has to do a lot of heavy lifting. For the most part, it does so effortlessly. Even when the story begins to feel crowded with characters and hamstrung by de Castell's flashback-heavy structure, the clarity if his prose and keenness of his dialogue slice through. Falcio is a charismatic narrator, and his relationships with friend and foe alike are sparkling and lively. In particular, Aline — a young girl he meets along the way who just so happens to share his dead wife's name — becomes symbolic of Falcio's idealism, which slips farther from his grasp as each disturbing revelation and deadly secret is unearthed.

To the eyes of those around him, Falcio himself is the titular traitor: a man who couldn't save his wife, his king or his beloved order of Greatcoats, and who now shoulders a world's worth of guilt. In its own way, Traitor's Blade is as grim and dark as the edgiest fantasy series on the shelves. It's also shot through with heroics, hope and a dazzling aptitude for fun. In his giddy enthusiasm, de Castell doesn't always keep the clichés at bay, but the book's considerable charm hinges on his love of rolling around in fantasy tropes like a kitten in catnip.