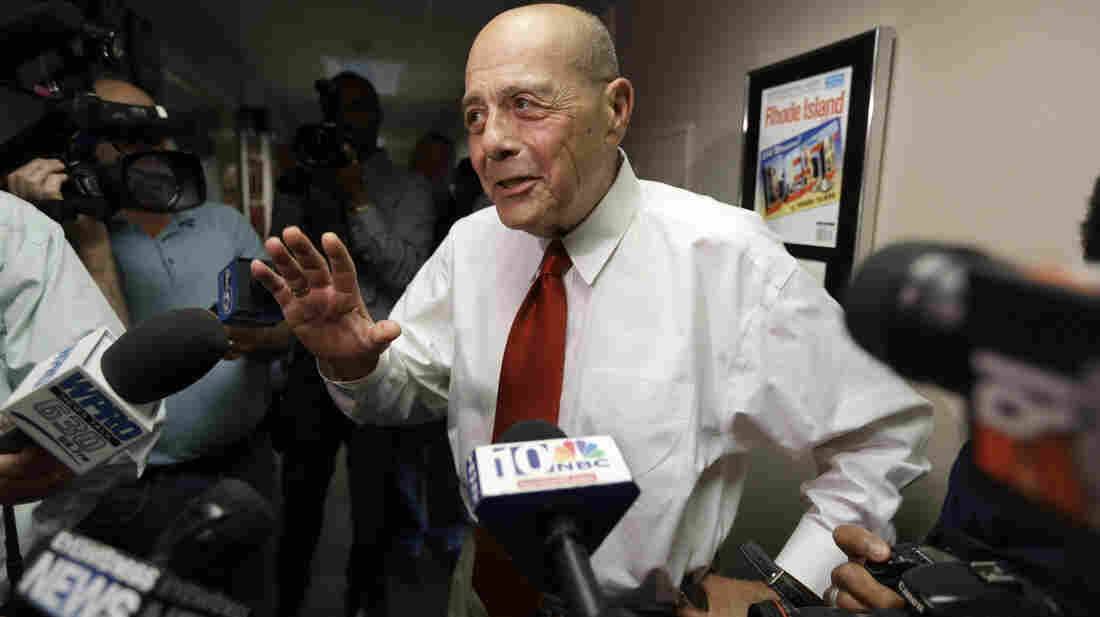 Former Providence Mayor Buddy Cianci speaks with reporters moments after announcing he will again run for mayor. Cianci, who made the announcement June 24 on WPRO-AM, was mayor for 21 years - longer than anyone else. Steven Senne/AP hide caption 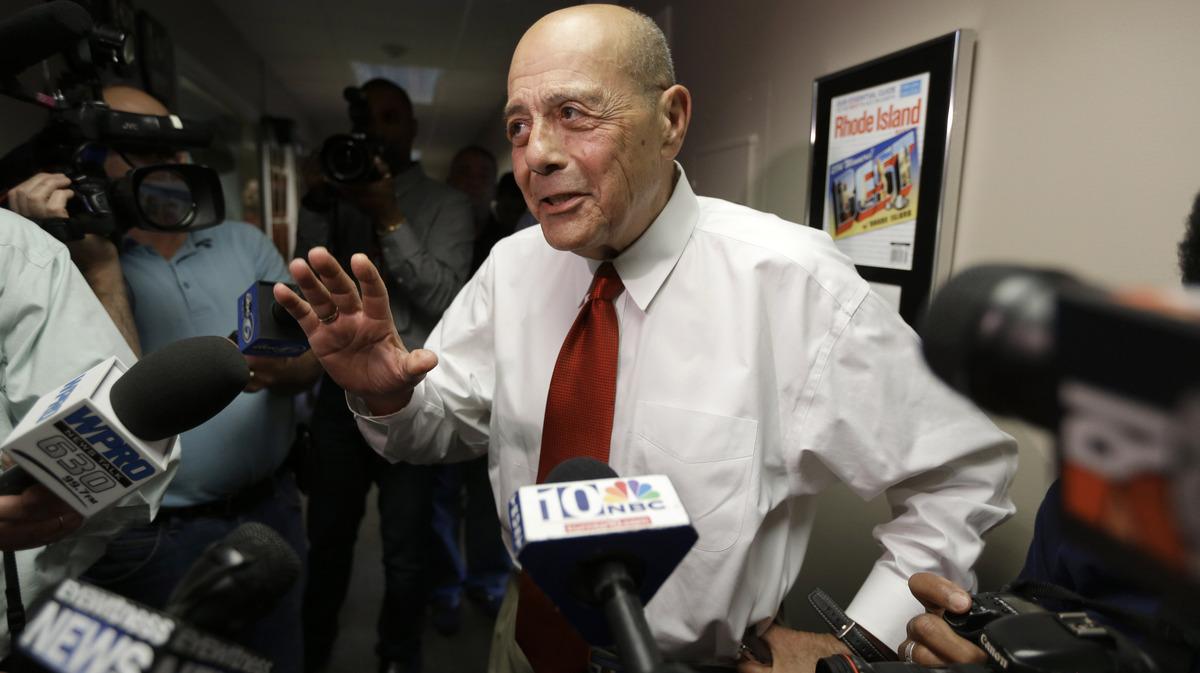 Former Providence Mayor Buddy Cianci speaks with reporters moments after announcing he will again run for mayor. Cianci, who made the announcement June 24 on WPRO-AM, was mayor for 21 years - longer than anyone else.

The 73-year-old Cianci served over two decades as mayor of Providence – though his time in office was split up by a felony conviction for assault, another for corruption, and time in federal prison.

Now he wants the people of Providence to elect him as mayor once again.

Cianci is a legendary political figure – and not just in Rhode Island – but former Brown University professor Darrell West says it's hard to imagine him running for office in a state less politically tolerant and colorful than Rhode Island.

"This is a guy who has been convicted twice and spent four and a half years in federal prison, but despite that kind of background, it's not inconceivable that this guy could end up becoming the next mayor of Providence," he said.

Cianci took over city hall as a Republican anti-corruption candidate in 1974 and resigned 10 years later after assaulting a man he suspected of sleeping with his estranged wife. He then regained power as an independent by a paper-thin margin in 1990.

While in office, Cianci touted a string of improvements while presiding over the nationally hyped Providence renaissance of the 90s. The economy was good, and residents generally felt better about their city.

But he wound up in prison after being convicted of one count of racketeering conspiracy in 2002.

Cianci has been a talk-show host since being freed in 2007, and he used his last radio broadcast before his campaign to assert that Providence has backtracked since he left office, and that he's the guy to fix it.

"I am mindful that people will expect more from me than from any other candidate for public office in Rhode Island. They will not be disappointed," Cianci said. He's running for mayor as he wraps up treatment for colon cancer.

In Providence's version of Little Italy, DiPasquale Square feels like a European-style plaza, with water spouting from a central fountain and umbrella-topped al fresco tables ringing nearby cafes and restaurants. Old-timers who have moved to the suburbs still come back to chat with one another on a nearby bench.

"He's smart – very smart, good politician," he said. "He knows how to work the system, get the system going."

Mike Gardner of Providence, who was relaxing with friends at a bar across the street, said he's glad Cianci is running for mayor and isn't bothered by his two felony convictions.

"I think everybody in this state's politics is corrupt to begin with, but that's the way of the world," he said.

Cianci holds his familiarity to Rhode Islanders as one of his bigger campaign assets.

"If the people don't want me, they don't have to vote for me – and that's not cocky," he said. "I realize I come with baggage, I understand that, but I think people have to take you for who you are. They know me from head to toe."

One person who knows Cianci is Phil West, the longtime former head of the good government group Common Cause of Rhode Island. West said he understands why people like Cianci despite his troubled past.

He pointed to a 1991 consent decree that sparked extravagant pension increases for public employees as evidence Cianci isn't good for Providence taxpayers.

West doesn't think Rhode Island's Rascal King has changed his bullying ways. But the presence of at least four candidates on the November ballot provides an opening for Cianci to regain power.