Accessibility links
Book Review: 'Pirates In The Heartland: The Mythology Of S. Clay Wilson Vol. 1' Pioneering underground comic artist (and R. Crumb collaborator) S. Clay Wilson's work is not for the faint of heart — or uneasy of stomach. Volume 1 of a new anthology of his work is out now.

'Pirates In The Heartland': At Least This Review Is Safe For Work

'Pirates In The Heartland': At Least This Review Is Safe For Work 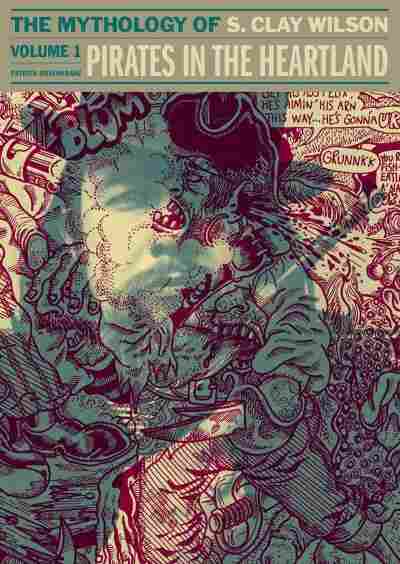 Pirates in the Heartland

The Mythology of S. Clay Wilson

There's a line pop culture likes to flirt with. It's the line between naughty and nasty, between seamy and sordid, between icky and "come on, really, I just ate lunch." Back in the mid-'60s, when ladies always wore stockings and gentlemen still wore hats, S. Clay Wilson left that line in his rearview mirror.

Amazingly, he still does. Fantagraphics' new collection of Wilson's early comics, The Mythology of S. Clay Wilson: Pirates in the Heartland, is so downright ... *blechhy* that it's impossible to even describe most of what's in it. That's not because it might trigger inappropriate frissons in your nethers, no — but it might make you barf on your desk.

Wilson's characters, which include such playful-seeming figures as the Checkered Demon, Star-Eyed Stella and hordes of randy pirates, all seem to have memorized the Marquis de Sade. They engage in sex and violence with the same joyless compulsion, anatomical precision and tortured misogyny as the mad Marquis.

And yet Wilson, no extraordinary draftsman, won countercultural stardom for these visions of the vile. He was a leader in the celebrated Zap Comix collective, which included Spain Rodriguez and comics king R. Crumb. His many fans included underground greats Ken Kesey and William S. Burroughs, and this is just the first of Fantagraphics' planned three-volume retrospective of his work.

To understand why Wilson's comics felt so necessary at the time, consider what happened when Crumb published a strip about incest in Zap's fourth issue. "Booksellers from Berkeley to New York were arrested for sale and possession of Zap #4," editor Patrick Rosenkranz notes. "This news brought a mixture of triumph and apprehension to Zap's creators." It also made it imperative for Wilson and his cohort to spit in the face of all censorship. That need went hand in hand with the urge (which became a requirement as the '60s marched on) to delve into the primal id as much as possible.

And so Wilson's characters rape, kill and maim one another in endlessly creative ways. Gorgeous women are frequently tied up and victimized, while men's organs come in for a painful array of torments. But there's a certain innocence here: Some really appalling excesses are avoided, as is racism, and those tied-up women often seem to be enjoying their toils. Wilson also shares his era's sophomoric fascination with biker gangs.

The funny thing is, though, Wilson isn't actually the wild man he seems to think. Both he and Rosenkranz believe his work depicts "the naked human psyche." But these comics don't have the spontaneity or idiosyncrasy of art that comes straight from the id. They're laboriously thought-out and composed, baroque in their detail. This isn't a primal scream; it's a cold-blooded assault on the moral instinct.

"My idea is not to entertain them but to enlighten them," Wilson tells Rosenkranz. "Or to make them sick. One or the other."

Wilson's true diabolism is evident in the basic experience of reading one of his comics. His panels are so dense, they can't be parsed at first glance. They're so stuffed with limbs and weapons and exposed genitalia, it's impossible to tell what's going on. You have to look carefully, painstakingly figuring out just who's doing what to whom, before your horror dawns. You have to work hard to be repulsed.

Some readers weren't interested in working that hard, particularly women. When Wilson submitted a graphic strip to the Berkeley Barb, an underground paper run by women, he wound up arguing with the editors over whether or not a character was consenting to a sex act.

It was a prescient question. Wilson's sexism dates him. He's arguably an equal-opportunity violator, firing off his cruelty in all directions, but he aims for women far too often. When women hurt men, it's usually because they're "dykes," stereotypical butch lesbians with leather jackets and ducktailed hair. Gay sex, on the other hand, is usually ignored, except when effeminate men are the (occasional) targets.

Ultimately, Wilson is a perfect representative of the dark side of the '60s. His work crackles with the viciousness that was the flip side of flower power. If he has any message to convey, it's that the world is falling apart: that (to quote Yeats by way of Joan Didion) "the center cannot hold." The background of one of his panels even shows a poor soul being broken on the wheel, an image straight out of Bruegel the Elder's apocalyptic painting The Triumph of Death.

That must be why the overweening feeling accompanying Wilson's work is one of deep sadness. Wilson's devils, pirates and busty women perform compulsively, their rictus grins parodies of true pleasure. Living in the Haight in '68, witness to all its many experiments in higher human consciousness, he already seems to be asking: "Is that all there is?"