Accessibility links
Book Review: 'The Book of Life,' By Deborah Harkness Deborah Harkness' latest concludes the sprawling story begun in A Discovery of Witches. There's a bit too much plot to handle comfortably, but fans will be happy to see favorite characters again.

A Supernatural Family Reunion In 'The Book Of Life'

A Supernatural Family Reunion In 'The Book Of Life' 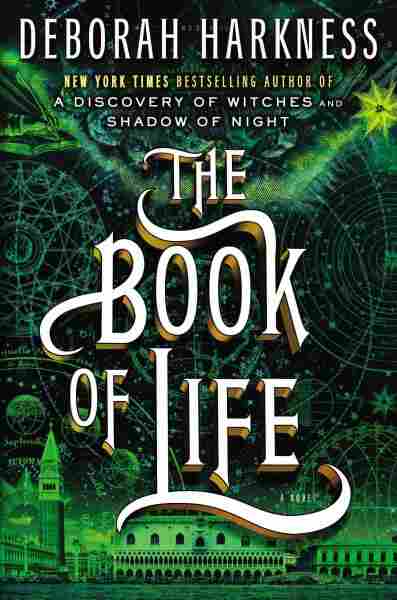 The Book of Life

One upon a time, historian Deborah Harkness was doing research at Oxford's Bodleian Library when she accidentally discovered a lost book that had belonged to 16th-century astronomer John Dee. A few years later, her first novel, A Discovery of Witches, told the story of Diana Bishop, a historian who accidentally discovers a lost manuscript called Ashmole 782 in the Bodleian Library, and realizes it's a magical text of crucial importance to the daemons and vampires that crowd the streets of Oxford — not to mention the witches (a group to which Diana reluctantly belongs).

A Discovery of Witches lingered on the wooing of Diana by vampire Matthew Clairmont, setting the stage for what was clearly drama yet to unfold; glimpses of rare-book hunting and Byzantine vampire-family politics helped enliven his distinctly musty overprotectiveness and her conveniently enduring lack of knowledge of the supernatural world. Its sequel, Shadow of Night, went for broke and hurtled Diana and Matthew back to 1590 with a cast so large it required a glossary. Harkness, on home ground there, clearly delighted in the details, immersing the reader in the vibrant markets and omnipresent mud puddles of Elizabethan London.

With The Book of Life, Harkness wraps the last panel in a triptych of uninterrupted story (those curious about the series would do best to start at the beginning). The joint Bishop and de Clermont family favorites — Gallowglass the affable Gael, no-nonsense witch Sarah, ice queen Ysabeau — are joined by handfuls of newcomers, who alternately help or hinder the twist-a-minute plot as Diana and Matthew deal with the implications of her pregnancy and the various factions that will descend on them unless the secrets of Ashmole 782 can be unlocked in time. (And in case you're confused, he calls himself Clairmont; his family are the de Clermonts — long story.)

For readers of the series, it's a long-awaited meeting of generations of the de Clermont and Bishop clans — a fitting focus, since The Book of Life takes the idea of family trees very seriously indeed. Unfortunately, the more organic struggles within the family tend to play out against Matthew's pursuit of his evil son, Benjamin, who spends most of his subplot raping witches and pickling fetuses to prove he's bad news (tropes that at this point in pop culture read like B-plot in a Law and Order: SVU episode, at best). But it's clear Harkness loves every vampire, witch, daemon and ambitious academic who gets caught up in the emerging Clairmont standoff against the elusive Congregation of supernatural leaders.

Harkness' style feels strained here, perhaps as a result of trying to scale a mountain of plot (her nonfiction has an effortless confidence that's reflected in some of Shadow of Night's most charming moments, but is largely absent here). Her love for alchemy and the details of spellcraft make Diana's witchy moments some of the book's most vibrant, standing out from the cavalcade of heavily populated subplots whose payoffs are rarely equal to the previous novels' escalating stakes (sorry). But by now, those who enjoy the series are here to watch Diana and the de Clermont vampire clan triumph. And for them, The Book of Life acts mostly as a family reunion for those longtime readers who have followed the mystery of Ashmole 782 since the beginning.