Accessibility links
Lose Yourself In The Wild Forests Of 'Those Who Wish Me Dead' If you're looking for a cracking summer read, NPR's Madhulika Sikka says you absolutely must pick up Michael Koryta's thrill-a-minute new novel about a teenager on the run in the Montana woods. 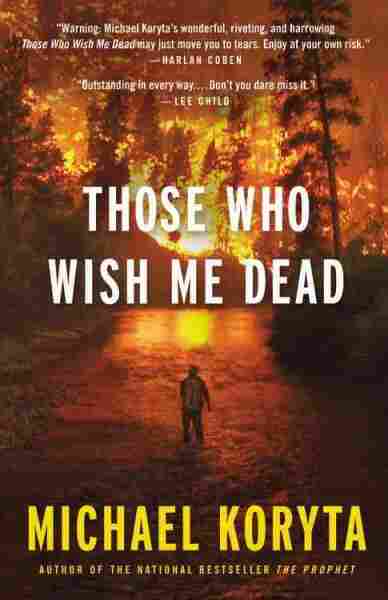 Those Who Wish Me Dead

Title
Those Who Wish Me Dead
Author
Michael Koryta

Jace Wilson is a 13-year-old boy who plans to do what many boneheaded 13-year-olds do: something dumb on a dare, to once and for all dispense with the idea that he might be a coward. But while psyching himself up to go through with the dare, he witnesses a murder — and before we know it, we're off. Michael Koryta's new novel, Those Who Wish Me Dead, sucks you in from the first page and doesn't let you go.

It's clear that Jace must disappear until the murderers are found. So, how do you make a teenager disappear for a while? His parents come up with an ingenious solution: a bodyguard (rather than untrustworthy law enforcement) takes him to a wilderness survival program in the forests of Montana, designed for troubled teens.

If you're looking for formulaic thrills and spills, then this is not your book. But if you want an elegantly written, taut thriller with an amazing sense of place, then look no further. As with his previous books, Koryta achieves that sense of place because he takes his research seriously. "I made several backpacking trips into the same Montana and Wyoming mountains featured in the book and attended a wilderness survival school," he told me in an email conversation. "I know I couldn't have written the same book without having a tangible sense of that world. The more immersion I have, the more potential it brings to the book."

A genre snob might call Those Who Wish Me Dead a "literary thriller." I think that's just a snobbish way of saying it's a well-written book — which it is, but it's also a cracking page-turner and a truly immersive experience. In addition to Jace, there is Ethan, a committed instructor who wills the boys in his charge to feel their environment and develop the instinct to survive it. And Hannah, a lonely firefighter, battling her own demons as she tries to help Jace outwit his pursuers.

The dense and intimidating Montana forests provide a breathtaking backdrop for the action — and it's fire season, which ratchets up the tension. As desolate and remote as the wilderness seems, the terror of the chase is never far away, and the villains here are so evil they'll make you quake. The story will take you down paths you didn't see coming, you'll be shocked as truths are revealed — and of course you'll feel the heat of fast-approaching fires and the sense of doom in the face of nature's wrath.

Koryta's writing has a cinematic feel, and in fact the movie rights for this book have already been acquired by 20th Century Fox. Several of his other novels are also in development for the screen.

I actually met Koryta in person before I ever encountered his novels. We were at a book festival dinner a couple of years ago, and I was taken by the polite, unassuming manner of this gentleman, who graciously indulged the foodies at the table as we over-ordered to the nth degree at a hot Miami restaurant. I remember thinking, "I don't know anything about his writing. I must look him up."

What I found was a thriller writer who can both write and thrill. To say that Koryta is prolific is an understatement. Did I mention that this is his 10th book in about as many years? And he doesn't tend to revisit the same well; most recently he's written The Ridge, a supernatural thriller about a big cat sanctuary, and a Friday Night Lights-meets-murder mystery in The Prophet.

"My clock is finite," Koryta says, "which means that the number of stories I can tell is finite." He adds that he always knew he wanted to write, and so he got on with it: "I wasn't willing to say, 'one of these days I want to write a novel.' I started writing novels." His work — as both a journalist and a private eye — has helped him create worlds that are authentic and raw.

Koryta, I might add, is only 31 years old. I mention this not to be ageist — but to delight in the fact that he's got a lot of time to keep on telling us stories. That, dear readers, is great news for us.