Accessibility links
Deal In Detroit Could Signal Cuts To Pensions Elsewhere Pensions have long enjoyed strong legal protections, but recent bankruptcy cases suggest this might be changing. As a result, cities and states might ask more workers to accept a little less. 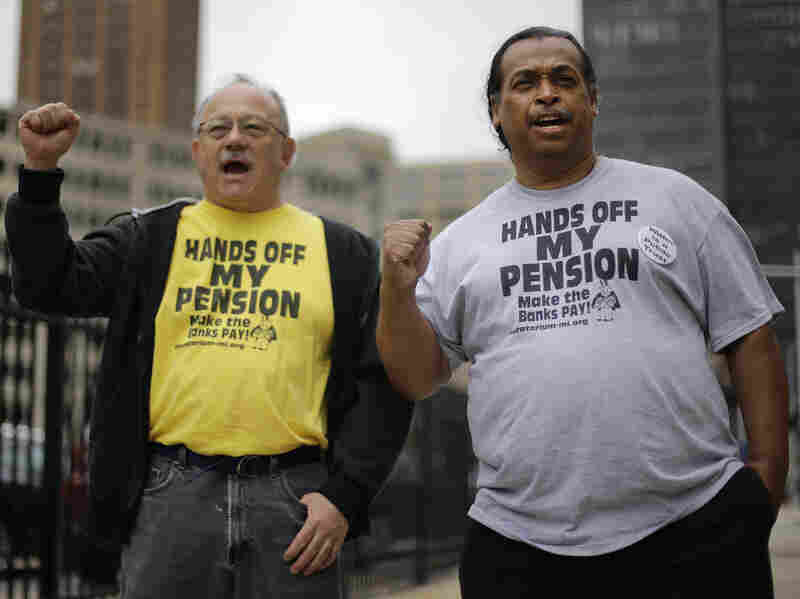 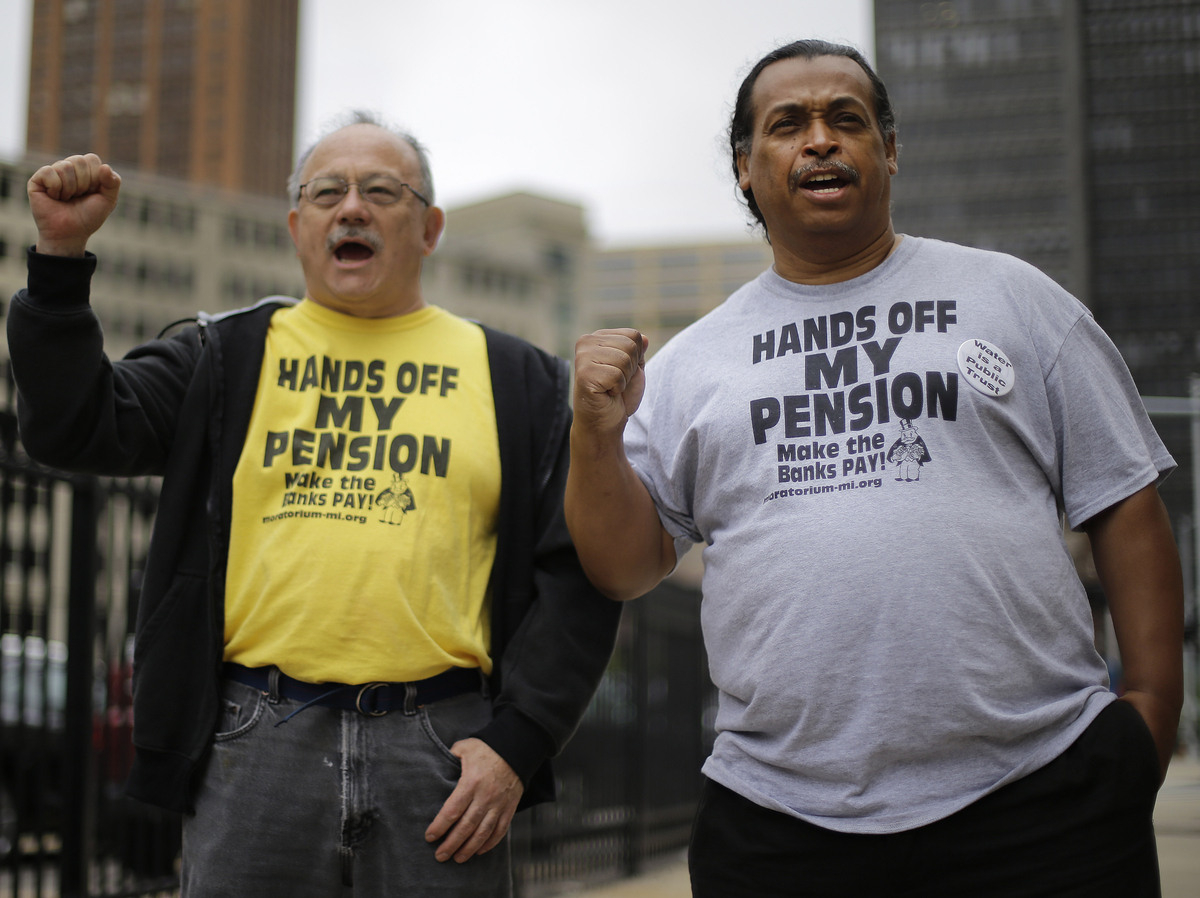 Retirees Mike Shane (left) and William Davis protest near the federal courthouse in Detroit on July 3. Workers and retirees approved pension cuts in Detroit's bankruptcy by a landslide, the city reported Monday.

It used to be that if you were a public employee, you knew your pension benefits could not be touched.

That's no longer the case.

Pensions have been under political attack in recent years, with some politicians arguing they can't afford to fund generous retirements at the same time they're cutting services. Numerous states and cities have trimmed the type of pension plans they're offering employees — mostly new employees.

The vote Monday in Detroit by retired city workers to cut their own benefits by 4.5 percent calls all that into question.

"Detroit has raised it as a possibility," says Daniel DiSalvo, a political scientist at City College of New York who studies public sector labor issues. "I don't think that most people, maybe with the exception of some unions, think pensions are inviolable."

With several other cases pending, it's not at all clear whether federal bankruptcy law trumps traditional pension protections. Pensions continue to have strong legal protection, and there's not going to be any great rush among states and cities to test whether cutting benefits for current retirees is something that will necessarily fly with the courts.

But the vote in Detroit does suggest that at least some pensioners might have to give up more than they ever expected.

"I think the deal in Detroit is going to mean that other troubled Michigan cities are more likely to reach deals," says Kim Rueben, a government finance expert at the Urban Institute.

The reason a big majority of retirees in Detroit were willing to accept cuts is that they worried they might be hurt worse if they didn't.

In its recovery plan, that city has been protecting pensions. Klein did not issue a ruling, but he suggested at a hearing that pensioners might have to take a hit, along with the city's creditors.

"I might be persuaded that ... the pensions can be adjusted," Klein said.

What Bankruptcy Is For

Bankruptcy is all about adjusting contracts to reflect new realities. Bondholders who were expecting to be paid back a full dollar might only receive 25 cents, for instance, if that's what a bankruptcy judge determines a seriously strapped city can afford.

Up until now, pensioners didn't face that same type of threat. The Detroit and Stockton cases suggest judges might be ready to rethink matters.

"The problem you have is there may unfortunately be promises that have been made that are not realistic or affordable," says James Spiotto, a municipal bankruptcy attorney in Chicago. "Therefore, there is a need to adjust the pensions, hopefully for the short term."

There may be no rush to change pension law. The changes in Detroit — which Judge Rhodes will still have to approve — is something that pensioners were willing to accept, as opposed to something that was imposed on them through a legal judgment.

As the legal calculus does start to shift, however, it's possible that things will change more rapidly in political terms. Even the chance that pensions are at risk might be enough to make public employees accept more cuts at the negotiating table.

"That obviously raises new pressures when cities are negotiating with unions," says DiSalvo, who is a senior fellow at the Manhattan Institute's Center for State and Local Leadership. "They can say that this is out there in a way that couldn't or wouldn't have been done before."