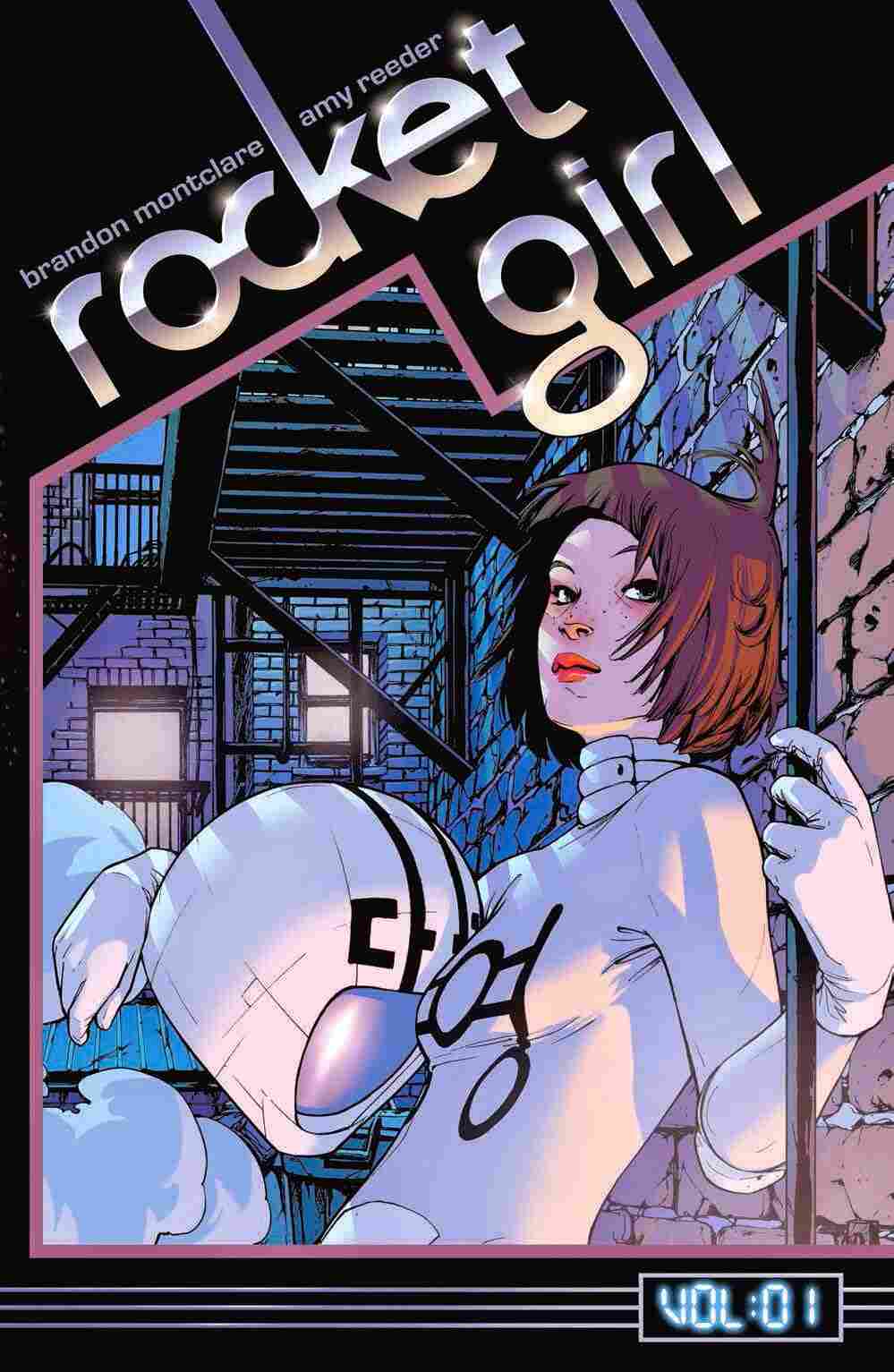 by Amy Reeder and Brandon Montclare

One word: jetpack. You perked up, right? When most of us dream of the future, jetpacks are one of the first things we dream about. And yet, even now that the future is indisputably here, we continue to be denied the ultimate sci-fi accessory. With all the 21st-century tech we've got these days — maps that talk, hand-held videophones — why aren't we all flying through the air with the greatest of renewable-energy-fueled ease? Maybe jetpacks need a special kind of power, an explosive force the average adult just can't muster. Maybe they need a teenager instead — say, a teen girl. A Rocket Girl.

It's 15-year-old DaYoung Johansson who steps up, freckles blazing and pugnacity on high, to don the 'pack in Amy Reeder and Brandon Montclare's effervescent comic. Collected here in a five-issue volume, Rocket Girl chronicles DaYoung's adventures after she time-travels from an alternate, futuristic 2013 back to 1986. Why does she need a jetpack to travel through time? Why does it only seem to be adolescents who have them? These are reasonable questions, and the fact is that Montclare doesn't answer them. What he does, though, is send the reader on a high-spirited, often funny ride — no special transportation needed.

It seems DaYoung wasn't any ordinary teenager in her version of 2013. She was a member of the New York Teen Police Department. Now back in 1986, armed only with her flight gear and some awesome fighting moves, she beats down baddies of all stripes while pursuing her mission to stop the evil mega-corporation Quintum Mechanics.

There are all kinds of wonderful plot and character points in Rocket Girl, not to mention the sound effects: Apparently hovercraft from the future go "Boota Boota." It's a shame that they're overshadowed a bit by Reeder's fantastic artwork. True, this story isn't going to get you pondering the eternal paradoxes of time travel in any deep way. But it's got the key elements of a fun comic: It's jokey, light and unpredictable. The concept of a teenage police force, ludicrous at first glance, gains life from the energetic, endlessly idealistic DaYoung. (That 1960s line about not trusting anyone over 30? She takes it seriously.) The "flying juvenile," as the TV news dubs her, has a steely determination that's evident whether she's busting bad guys or flipping pancakes. Her white suit and helmet lend an angelic touch.

Eisner Award-nominated Reeder is the ideal artist to draw a teen girl. DaYoung is strong and graceful without any pneumatic body parts thrusting off the page. The one area where Reeder's got real problems, oddly enough, is in capturing motion. That's quite a weakness when your protagonist spends most of her time airborne. Reeder does OK with the effortless aspects of flight — gliding, spinning, tumbling. When DaYoung soars, so does the book. But when she hauls off and hits somebody, we hit the ground.

But as in Halloween Eve, her previous comic with Montclare, Reeder lavishes her panels with beautiful light. Bouncing reflections, jellybean colors and lens flares combine to create a fizzy, kinetic atmosphere, offering a reminder of just how gloomy many comics are these days. Reeder's rocket world is suffused with radiance, particularly from DaYoung's pristine suit and trail of magic flame. Even grungy locales like a dank subway platform get lit. The tiles may be cracking, but they're snowy white, and each fluorescent overhead is haloed in a fuzzy pastel glow.

In a story about a 21st-century angel, it's only fitting that every light source has an aura. Even if that angel is just an ordinary teenage girl.

Etelka Lehoczky has written about books for The New York Times, The Los Angeles Times and Salon.