Accessibility links
Advocates Say Military Dogs Aren't Pets — They're Veterans On Capitol Hill, dogs and their handlers have made the case that all U.S. military dogs should be brought home from war — and treated with the respect they've earned on the battlefield. 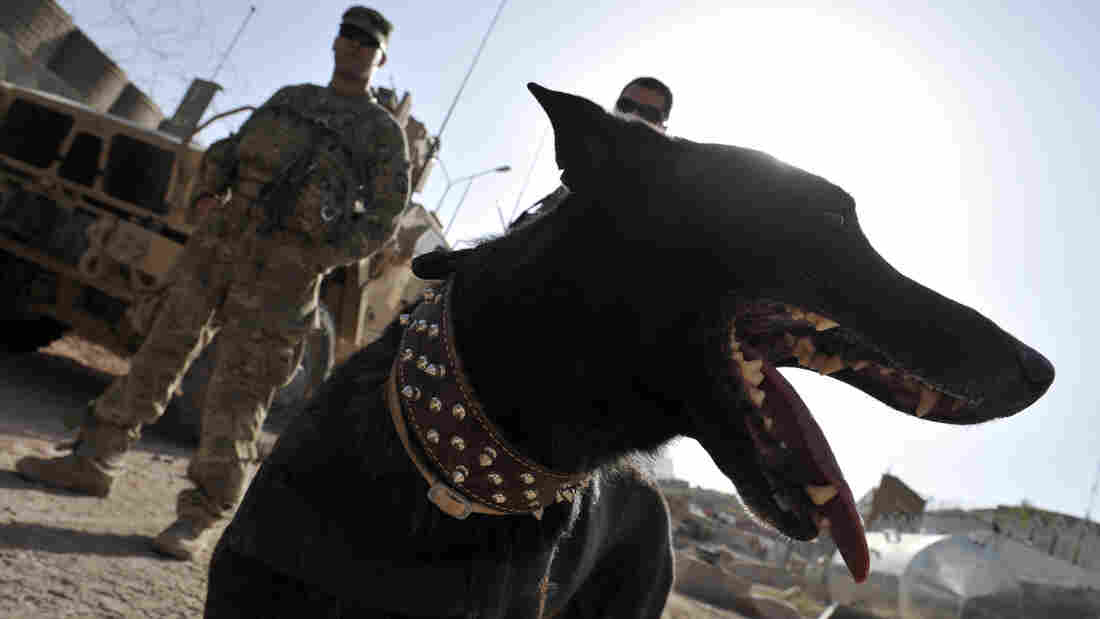 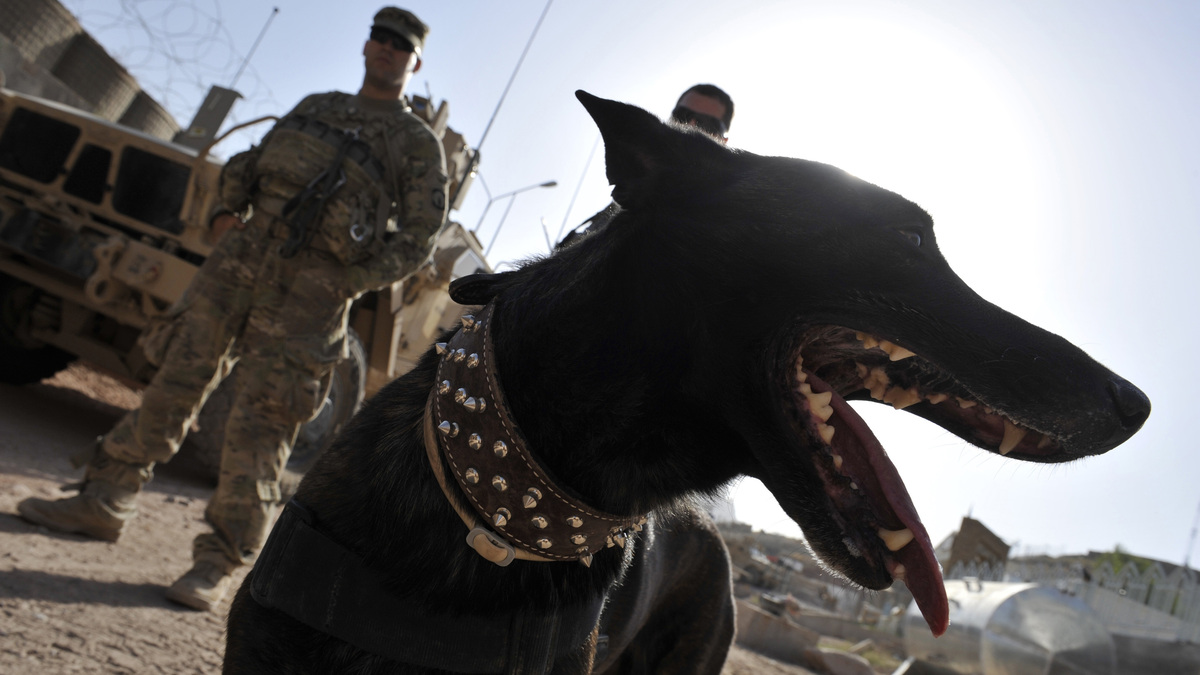 It's dog days on Capitol Hill — or, more precisely, dogs have had their day there.

Five in particular — all war dog veterans. The canines joined their human advocates at a Capitol Hill briefing Wednesday, "Military Dogs Take the Hill," to spotlight an effort to require that all military working dogs be retired to the U.S.

Congress passed a law last year saying the military may bring back its working dogs to the U.S. to be reunited with their handlers, but it does not say they must be brought back. 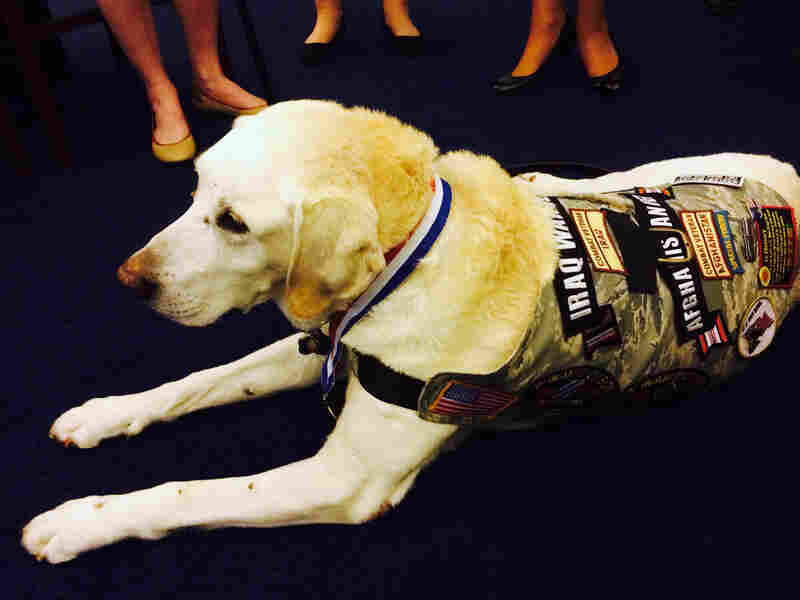 Carlos, one of five war dog veterans at a Capitol Hill briefing Wednesday. And not one bark from any of them during a two-hour event. David Welna/NPR hide caption 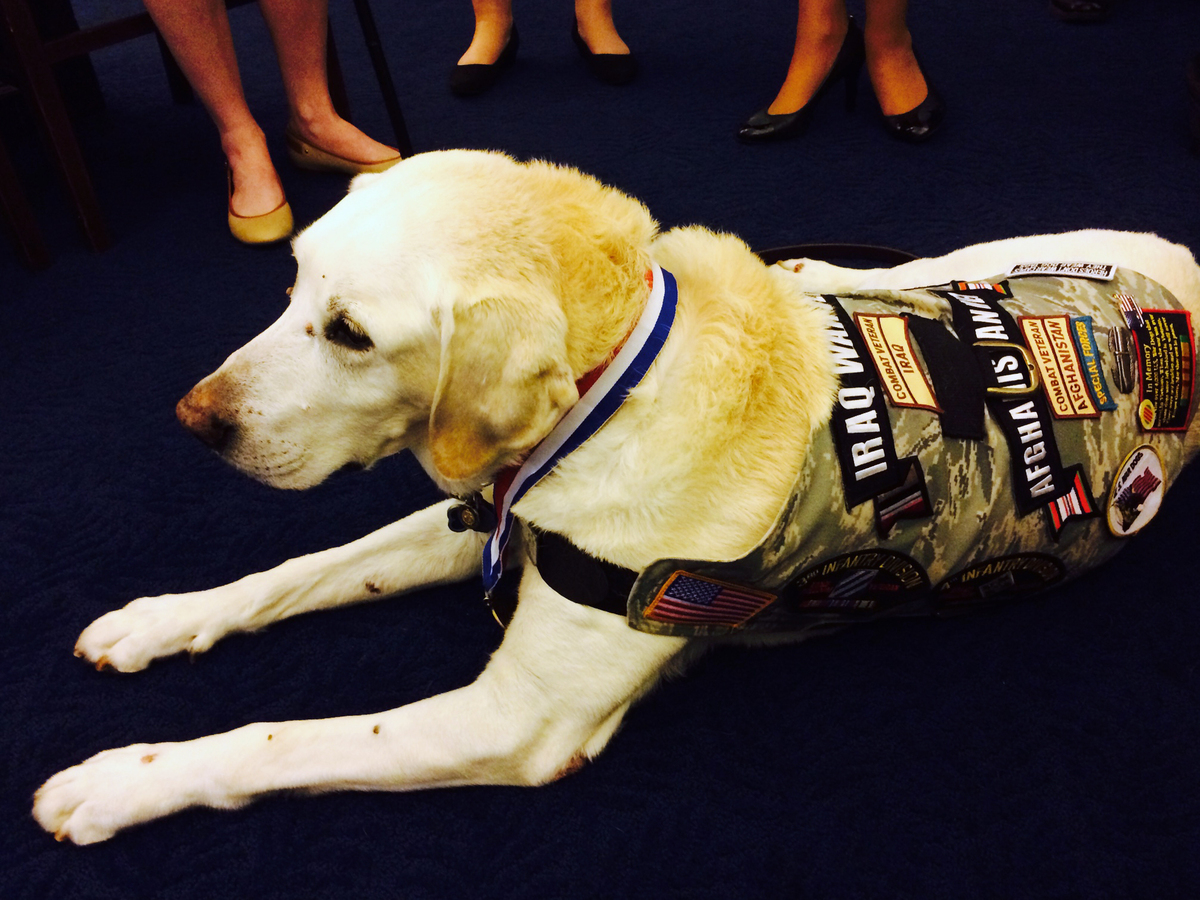 Carlos, one of five war dog veterans at a Capitol Hill briefing Wednesday. And not one bark from any of them during a two-hour event.

"We're suggesting today that an easy solution, so very easy, is just to mandate that the dogs are returned to U.S. soil before they're retired," said Robin Ganzert, president of the American Humane Association, which hosted Wednesday's event. "And then, of course, these wonderful groups that we work with can work with the military to make sure the dogs are reunited."

Several House members were on hand to show their support. Nevada Democratic Rep. Dina Titus recalled the key role dogs played when she served as a state legislator.

"We always had a rule: If you wanted to get your bill passed, just show up with a dog. That always won people's hearts over, so I think we're in pretty good shape here," Titus said.

Three years ago, Ruby Ridpath learned from an Air Force captain in Kabul that Carlos, a yellow Lab who specialized in sniffing out explosives during five years in Iraq and Afghanistan, was being retired.

"And I said, 'Bring him home.' Three words, that's all it took: Bring him home," she says. Ridpath and her family adopted Carlos in 2011.

She considers him a vet, not a pet. And she thinks he deserves more help from the government he served.

"I'd like to see that there be some medical assistance, because for Carlos, I've spent almost $10,000 in medical costs for him. He's been worth every penny, but it's quite excessive at times," she says.

One Commando Had Four Legs; A Dog Reportedly Was Part Of Bin Laden Raid

Others want to see more of an effort made to reunite war dogs with their handlers. Kristen Maurer heads Mission K9 Rescue, a group that helps handlers when they come back without their dogs.

"They all ask me the same thing. They say, 'Can you help me get my dog?' The words are not what strikes me. It's their tone of voice — almost a desperation," Maurer says.

One such handler is a Marine vet named Deano Miller, who was in Afghanistan four years ago with a yellow Lab named Thor.

"He'd never leave my side. He was never on leash. He was never in a kennel. He was always just — I didn't have to worry about that. He didn't leave me," Miller says.

"And they used to think I'm joking, but I was serious," Miller says.

In May, the two were reunited. "Everything's a lot better now at home, and it wouldn't be possible if I wouldn't have him," Miller says.

Miller says his shadow has come back.