Accessibility links
5 Things I Learned About TV's Future From The Critics Press Tour From being mistaken for Randy Jackson to confronting network executives about diversity issues, TV critic Eric Deggans runs down highlights of the two-week blizzard of parties and press conferences. 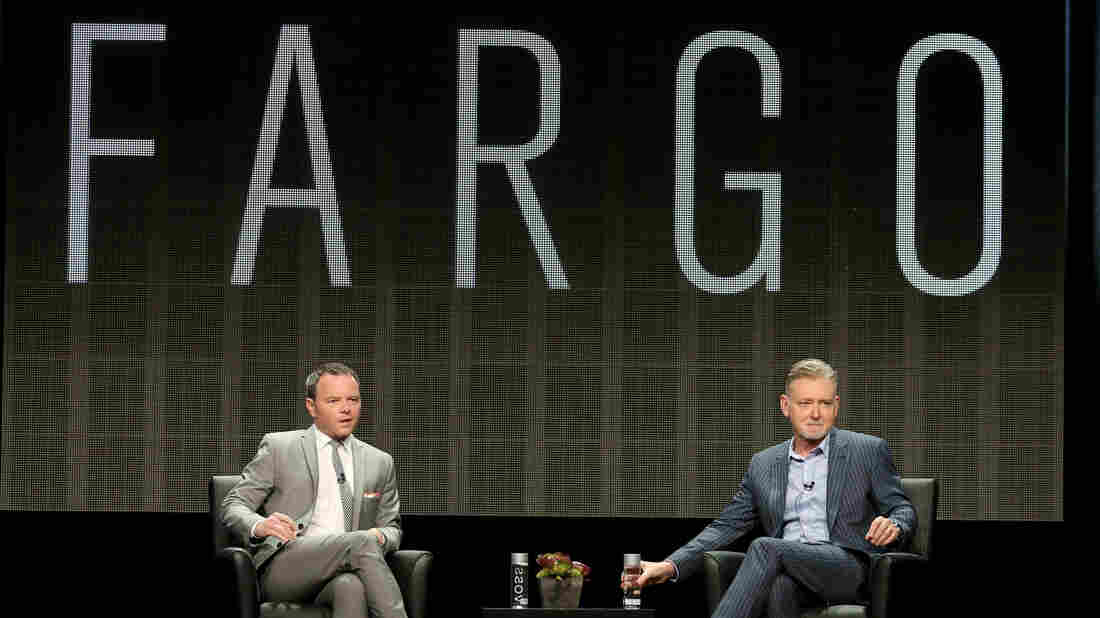 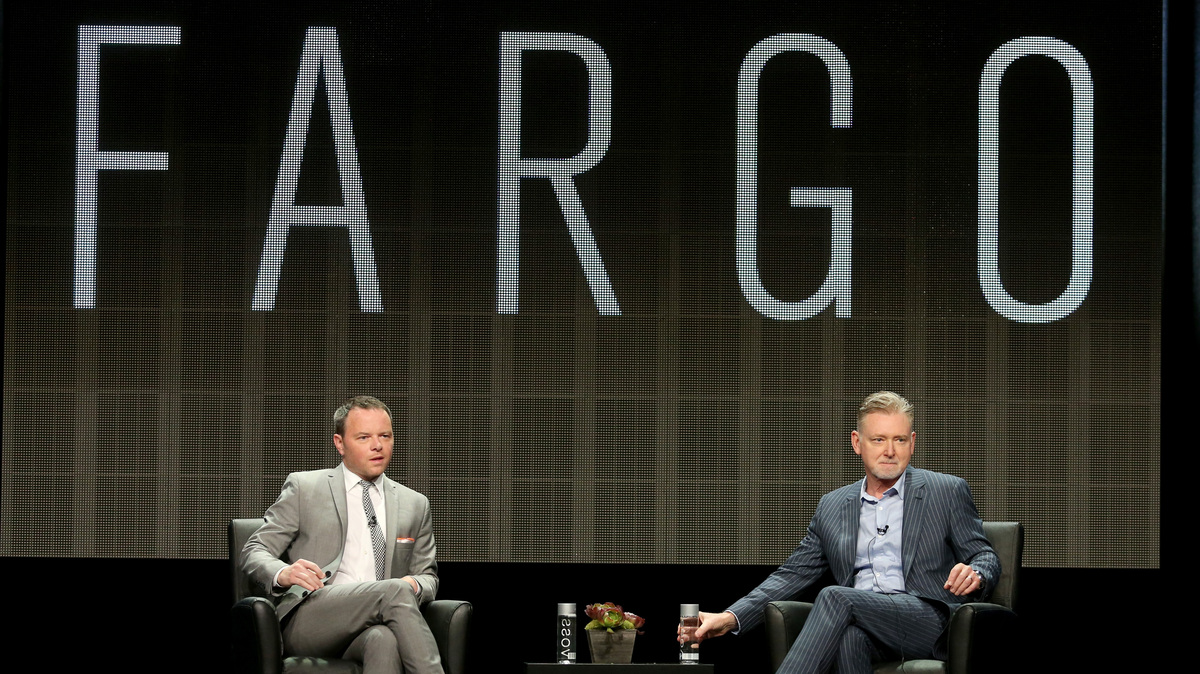 The voice came from over my shoulder, a shouted greeting in a room crowded with journalists, publicists, network executives, producers and stars.

I tuned to see David Boreanaz, star of the Fox TV show Bones, calling out to me like a long-lost friend. I knew he had mistaken me for someone else — in a party held by Fox at the exclusive Soho House club, where everyone from Kelsey Grammer to David Tennant was sipping cocktails and talking shop, it wasn't hard to make that kind of mistake.

I shook his hand, reaching over a clutch of fellow journalists to give him a smile before walking on. It wasn't until he posted a sheepish note online that I found out that he thought I was a superstar bassist turned American Idol judge.

Best moment was me yelling out to a guy who I thought was Randy Jackson, "Yo Randy!" @FOXTV #TCA party..and it wasn't. Was a #Reporter

Crazy as it sounds, these are the kinds of experiences you can have at the Television Critics Association press tours, where TV stars, journalists, producers and executives are mashed together by a two-week blizzard of press conferences, cocktail parties and special events.

The value of the press tours, which happen in January and July, can vary for each journalist. But at its best, the TCA press tour allows an up-close look at the TV industry in ways few other big business institutions allow. (Imagine a two-week event where all the leaders of the auto industry hang out with the journalists who cover them, and you have an idea of how odd this event seems outside hype-dependent Hollywood.)

One minute, you can be commiserating with Andre Braugher on the set of Brooklyn Nine-Nine about transitioning to comedy, and the next you can be publicly pressing CBS entertainment head Nina Tassler on why there is so little ethnic diversity among lead characters in its new shows.

Or you can be explaining to a celebrity how you are not the guy who says "yo" and ends every sentence with "dawg."

But the question that consumes us all annually, and this year in particular, is simple: Where is TV's future?

It's embedded in every question to a TV executive about casting diversity, or to a producer about what distinguishes a miniseries from a series, or to an actor about why they chose a television project over a movie deal.

There is a sense in Hollywood that the TV industry is exploding in slow-motion, swelling to accommodate newer players like Netflix, Amazon, Yahoo and Xbox, with little sense of where the endgame may lead.

As the press tour ends this week, here's what I found out about the future of television.

1. No one knows anything about TV's future, except that there will be more of it. The only certainty is that more players are making more original TV shows in an effort to make their media platforms more attractive to their target audiences.

That means video game developers are hiring producers from scripted TV shows to craft the storylines for their top games, and that video game makers like Xbox and PlayStation are joining websites, cable channels and networks in making new shows.

Which means that the biggest problem most may face in the immediate future is getting noticed amid the deluge.

2. Despite all the new TV, the actual structure of television episodes isn't changing much. Watch one of the eight drama pilots Amazon picked to turn into series and you'll see very little deviation from the structure of most traditional TV shows: They last about an hour, they have close to the same production values, they slot neatly into a genre — cop drama, family drama, sci-fi drama and so on.

One reason may be that creators of these new shows are trying to sell them to many different outlets at once, which means the shows have to be in a format that cable TV, the networks or an online service all can easily program.

"We treated Hulu like any [other] TV network," said Paul Scheer, an actor and producer (The League) who serves as executive producer and appears in the Hulu series The Hotwives of Orlando. "We pitched the show to a few different people. ... Hulu came to us and was the most passionate to let us do this show. But we treat it the same way that you would treat any other network. So there are restrictions within some of the things that we can do. We can't show nudity. We can't have cursing. We're not pay cable."

3. No one can really agree what a series is anymore. The big story of the summer is that three different, Emmy-nominated programs violated the traditional rules of TV series structure.

HBO's True Detective, which earned Emmy nominations as a drama series, will return next year with new stars, new actors and a new setting. FX's American Horror Story, nominated for Emmys as a miniseries, also returns next season with a new story and new setting, but with many actors from past incarnations playing different roles, and a new guy, The Shield alum Michael Chiklis, joining the cast.

And FX's Fargo also will return next year without superstars Billy Bob Thornton or Martin Freeman, but with a new story set in 1979 — nearly 30 years before the events of this season — and centered on Season 1 hero Molly Solverson's father as a younger man.

Such structures allow big stars, who normally wouldn't stop doing films to tackle quality TV projects, to shoot for shortened periods of time. But the resulting confusion about terms like "limited series," "miniseries" and "anthology series" have left people in the industry a little confused.

"Part of what we're trying to embrace about this idea and this show is it's an anthology ... and we want to take the leap. We want the creative challenge," said Warren Littlefield, once the head of entertainment for NBC, who now serves as an executive producer on Fargo. "It's a lot easier saying, 'The cast comes back, and we're going back to our standing sets.' ... [But] everything we did was kind of making a 10-hour movie. And that challenge, I think, brought out the best in us, the best in all the talent, from our crew, from all the local talent that was a part of it. I think somehow we must be gluttons for punishment."

4. Some TV networks still haven't gotten the memo on diversity. ABC saw fewer pointed questions about its ratings during press tour as critics noted their astonishing level of diversity in new shows; six new shows with either nonwhite characters as leads or co-leads, or a nonwhite person as the show creator.

But CBS still seemed mired in the past on that score; just one of its new shows features a person of color as a co-lead, while its NCIS spinoff set in New Orleans — a city where more than 60 percent of the population is black — has just one black person in the core cast.

"We don't look at fall as the defining mark of giving us our diversity quota," said Tassler, chair of CBS Entertainment, suggesting that summer series starring Halle Berry and Cote de Pablo could pick up the slack for fall and winter TV seasons sorely lacking in diversity. "We look at the entire year; we look at the entire daypart. And if we don't reach, if we don't have as diverse casts as we would like to going into the season, we see where we can add."

5. No one knows how to make lots of people watch smart, critically adored comedy. It's a frustrating paradox for critics; some of TV's smartest comedies don't draw big audiences, including NBC's Parks and Recreation and Community — both shows shot with a single camera, like a movie. Instead, comedies filmed live with several cameras and staged like plays — such as CBS' Two and a Half Men, Big Bang Theory and The Millers — seem to draw the big numbers.

But Mike Schur, executive producer and co-creator of another smart comedy that's struggling for an audience, Brooklyn Nine-Nine, suggested one show has cracked the code: ABC's Modern Family.

That show, Schur said, has the rapid-fire joke rhythm of a multiple-camera comedy, but is filmed with a single camera for a more sophisticated look. The result is a sitcom with the rhythms of a broadly popular comedy but the feel of a better-crafted product — resulting in great ratings and Emmy nominations.

Bob Greenblatt, chair of entertainment for NBC, noted something similar when asked why broadcast networks haven't created shows as acclaimed as True Detective or Fargo.

His answer: Too few people will watch that kind of show for a broadcast network to consider it a success. He used their own critical favorite, Hannibal, as an example.

"I don't know why 5 million people or 8 million people won't watch Hannibal on a broadcast network," Greenblatt said, citing the number of viewers needed to make it a hit on NBC. "Three million might watch it on Showtime or 2 million on another cable network, and that's OK. The minute you try to do something that is dark and subversive and frightening and gets into that territory, you start to peel away the mass audience. It's just the way it is — because the quality of [Hannibal] is undeniable."

Time for somebody to crack the code for the networks, again...