Accessibility links
At Jaguars' New Stadium, Come For The Football Or The Swimming The Jacksonville team revamped its stadium with luxury cabanas, pools and video displays that are longer than the field. The beleaguered team is banking on drawing more fans to its games. 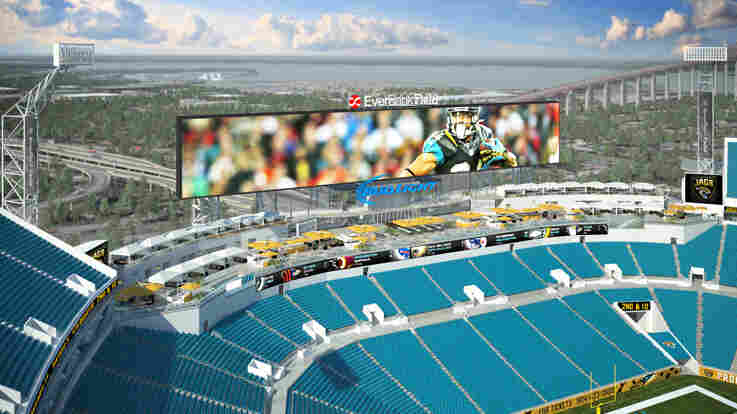 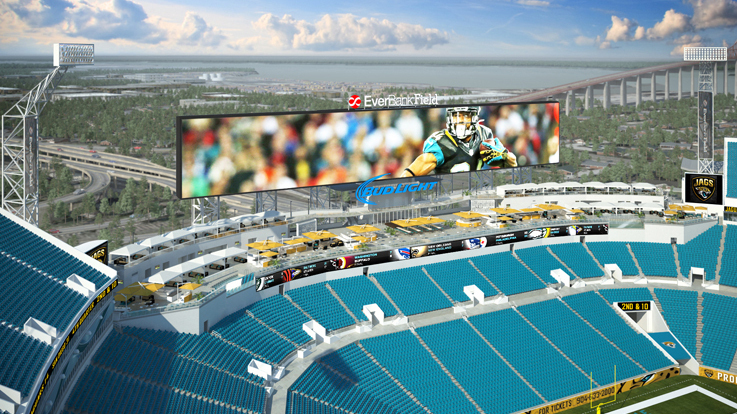 Hi, Mom! EverBank Field, home of the Jacksonville Jaguars, recently installed a massive video display. This artist's rendering previews the giant screen, which will be unveiled on Saturday.

Courtesy of the Jacksonville Jaguars

In Jacksonville, Fla., on Saturday, the Jaguars football team will unveil what it's calling the world's largest video display at a stadium. The team also has added luxury cabanas, where fans can watch the game poolside — improvements that are designed to get the beleaguered team's fans off their couches and into the stadium.

When team officials announced they were adding swimming pools to the stadium, some dismissed it as a gimmick. The Jacksonville Jaguars haven't been to the playoffs since 2007, and the team has been the butt of many a football joke.

Stephen Colbert even joined in. Among the cracks: "Pools — the perfect place to kick back and watch a football game, at least until they put hammocks between the uprights. Don't worry about getting hit by a field goal because again — it's the Jaguars."

Mark Lamping, the Jaguars president, laughed off the ribbing. "I thought that was awesome," he says. "Isn't it a great thing that even Stephen Colbert is taking time to pay attention to what we're doing here in Jacksonville?"

The team and the city have invested heavily in the game-day experience, spending $63 million this year on upgrades to EverBank Field.

Sid Perkins is leading the construction, and on a recent tour he showed off the centerpiece of the renovations — 15,000 video screens linked together to make one enormous display.

"They have gone above and beyond anything in sports," Perkins says.

The challenge, of course, is convincing fans to step away from their home theater systems. Of the 32 NFL teams, Jacksonville ranked 28th in attendance and 27th in percent of seats sold last year.

So you think that 55-inch flat screen is big? The video screens stretch to 362 feet — longer than the field itself. They were created by the South Dakota company Daktronics and designed to be bright enough to show up clearly under the Florida sun. Lamping says the massive screens will allow for multiple replays, and something else fans at home are used to: watching more than one NFL game at a time.

"Some of it's because they're participating in fantasy football and they want to see what's happening," Lamping says. "In Jacksonville, where about half the people who live here are not from the state of Florida, we know that many of our fans have other teams that they're interested in."

So Jaguar officials are gambling that even if action on the field in front of them isn't exciting enough, fans still will come to the stadium.

Victor Matheson, who teaches at the College of the Holy Cross and specializes in stadium economics, says he's seeing this trend all over professional sports — most recently at the home of the Brooklyn Nets. In addition to giant digital displays, he says sports venues also are pumping up Wi-Fi "so that people can watch the game and then instantly pull out their smartphone or their iPad and watch the replay from the stadium."

Or maybe they can tweet selfies by the pool. One of the more unusual additions at EverBank Field are the two new shallow pools in the north end zone. A pool cabana will run you $12,500 — but that price covers 50 tickets and unlimited food and drink.

Sports economists say there's often a bump in sales when a team gets a new stadium or makes significant upgrades, and that honeymoon can last for years. Plus bigger, better stadiums come with bragging rights — that is, until another team builds something even bigger and better.