Accessibility links
Clapton And Cale: Notes On A Friendship One year after J.J. Cale's death, his friend and fan Eric Clapton says we still don't know the half of the late songwriter's talent. Read Clapton's extended interview with NPR's Eric Westervelt. 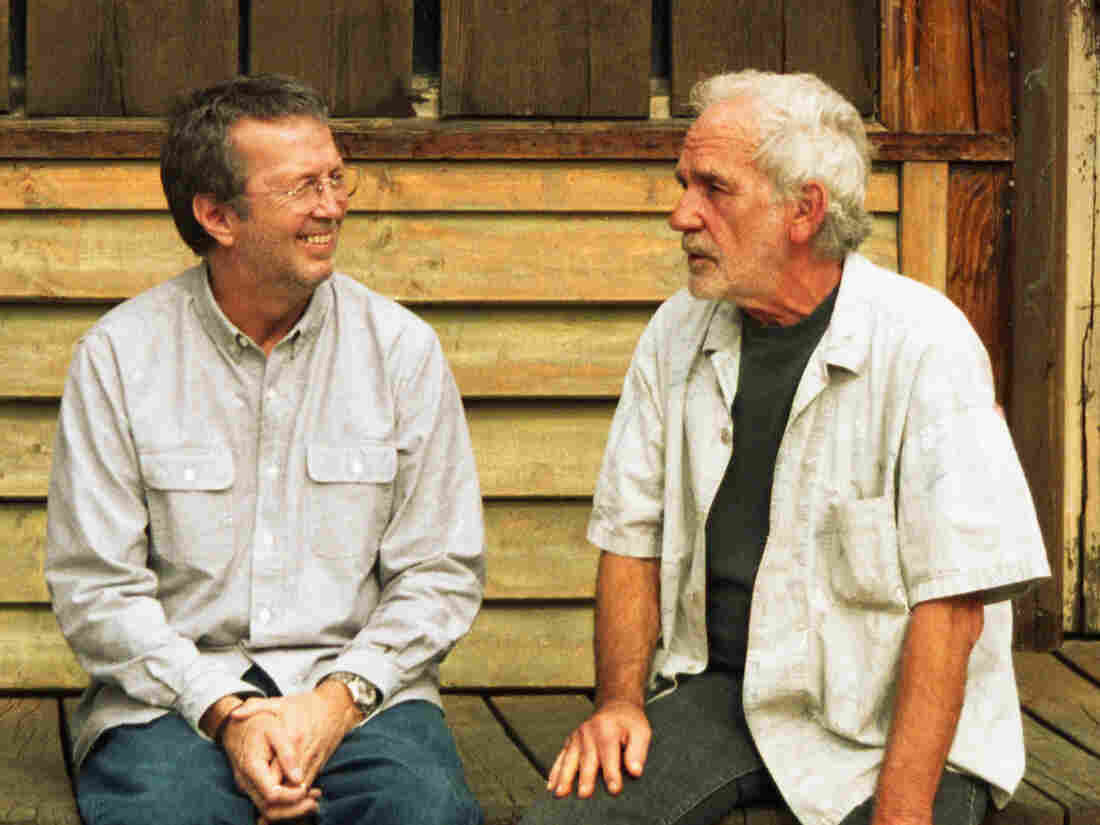 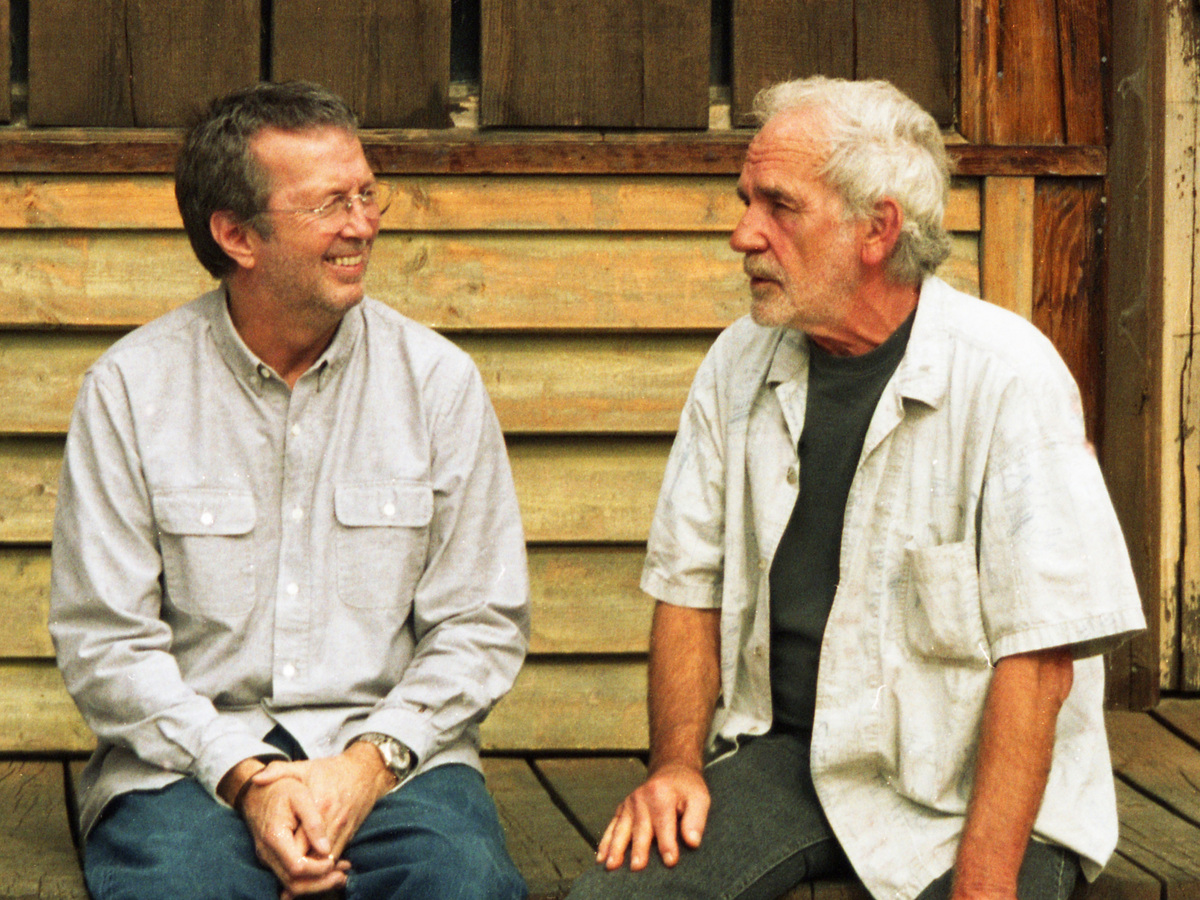 Brian Rooney/Courtesy of the artist

There are, you could argue, two strands of Eric Clapton fans: those who love his scorching electric solos and groundbreaking fusions of blues and rock, and those who prefer his mellow, unplugged pop songs from later years. The two groups might just find common ground on his latest album.

The Breeze: An Appreciation of J.J. Cale will be released next week. It's an all-star tribute to Clapton's friend, the guitarist and singer-songwriter from Tulsa, Okla. J.J. Cale deeply inspired Clapton and wrote two of his biggest hits, "After Midnight" and "Cocaine."

The album includes all-star guests Tom Petty, Mark Knopfler, Willie Nelson, Derek Trucks and John Mayer. Clapton was in England when he got a text message that Cale had died; as he tells NPR's Eric Westervelt, it was on the long flight to Los Angeles for the funeral that he began to map his tribute out. Hear the radio version at the audio link, and read more of their conversation below.

Eric Westervelt: So you're on a plane, and on a napkin, you're already sort of mapping out the songs and the artwork of the album?

Eric Clapton: On my phone. When I got to L.A., I drove down with my friend to Escondido and we went to the service. I met his wife, Christine, and his manager, Mike Kappus, and we paid our respects to one another and gave each other hugs. I held back as much as I could, but as soon as I thought it was decent I said, "I'd like to make a record to pay tribute to John." And they said, "That would be great."

Making this record was a way for me to say thank you for all the inspiration over the years. I suppose at some point I started to feel mildly outraged that he hadn't got the recognition that, at least I thought, he should have had. He plowed a furrow that was unique and that's the way he wanted to be, to have a quiet life. But, I still felt that he deserved more recognition, at least in his own country. He was pretty well known in Europe but lesser known in America, I think.

I think he saw his job on the same sort of scale as someone who likes to do landscape gardening, or an architect. He just thought it was something you could develop a skill at.

You write in your autobiography that you were a bit tired of the guitar hero thing and the gymnastic guitar playing. It sounds like J.J. Cale helped to start to dial you back, to be a little more restrained in the soloing. Is that accurate?

Yeah, I think it was getting out of control. What seemed to evolve out of the '60s and into the '70s and then, in another way, the '80s — heavy metal came out of all of this stuff — was, like, volume and proficiency and virtuosity. There didn't seem to be any reasonable limit to that; it was just crazy. I wanted to go in the other direction and try to find a way to make it minimal, but still have a great deal of substance. That was the essence of J.J.'s music to me, apart from the fact that he summed up so many of the different essences of American music: rock and jazz and folk, blues. He just seemed to have an understanding of it all.

From the interviews I've heard with J.J. Cale, he didn't really seem to mind that he never became famous in the way you did. Do you think he cared?

I think he found it inconvenient to be pestered by people about what he did for a living. I think he saw his job, or his vocation as a musician, on the same sort of scale as someone who likes to do landscape gardening, or an architect. He just thought it was something you could develop a skill at, be good at, get some satisfaction. I don't think he recognized that all of the other paraphernalia was necessary. And, in truth, if he had been held to account for that, it would have taken up too much time for him to do the work he did.

So it was a benefit in that sense?

I mean, I wouldn't change anything. For me he was a beacon in a philosophical sense, because I needed to know that there was someone else out there that didn't want all those trappings. When I was growing up in the rock and roll school in England, in the '60s, it just seemed to be a given that everyone was going to end up on TV. The ambition was to have a Top 10 single, to get a recording contract. I felt really alone in the fact that I just wanted to become reasonably good at what I was doing, at playing music. I kind of intuitively knew that that stuff was distracting and counterproductive and mind-distorting.

I never talked to him too much about it. But he lived in a way that I thought was a good model for someone who wanted to pursue music as a serious vocation, without getting too bogged down in all of the peripheral stuff.

Sounds like you were a tad envious and you admired the fact that he was able to pursue his craft without the trappings of fame.

Yeah, I think he cleverly plotted his course. But, it was only later that I found out that he began his journey as a recording engineer, anyway. He didn't start making records until he was, I think, in his early 30s. Up until then he had been learning how to make things sound good, recording people like Freddie King and Bobby Bland, getting steeped in that kind of music and knowing how to mic it and record it and mix it. Then he just applied those skills to his own songs.

How did it come about, working with such an incredible collection of musician friends of yours to record The Breeze? Did you just start calling up John Mayer, Tom Petty, Mark Knopfler, Willie Nelson, saying, "You want in on this?"

I started out with my co-producer Simon Climie; we went into the studio to collect material. It was a simple choice of whether or not we'd try to emulate John's style, and we made a quick decision that yes, we would try to go after his brand of arranging and producing — in the knowledge that it would still sound different anyway, because no one could ever replicate the way he sounded. So that's what we did. We invited a lot of J.J.'s friends from Tulsa to come down and hang out and play and we turned it into a big party, took pictures, and then later on, started to share out the vocals.

Actually, the first person I asked was Don White, and I never met Don White until the funeral. He introduced himself to me and said, "I would like to say hello. I'm the guy that gave John his first job." It turned out that J.J. played in his band until he decided that he wanted to make a record, and then he excused himself. I was really impressed with this guy. He was a gentleman, you know?

He's got a great voice.

John Mayer is part of a younger generation of musicians. Did he have a big appreciation of J.J. Cale before this project?

Yes, John's got a pretty good idea of what's going on; he was already doing "The Breeze" on stage. He's ideal for this because we need someone with that kind of energy, and he's a good interpreter. We went into the studio in New York with the tracks and he got the three songs in two hours or something like that, first and second takes. Needed no direction whatsoever.

"After Midnight" and "Cocaine" aren't on this album. Did you want to focus mainly on material you hadn't worked with before?"

Yeah, I thought it was important to pick out things people didn't know. If it was gonna be for my satisfaction, I may not have done it that way, but I wanted people to know about his history, so I was choosing songs from way back. Like, "Starbound" is a song that not many people know about. And there were a couple of songs that were unpublished. I thought it was good for people to see the other side of J.J., songs that weren't necessarily instantly commercial but that had substance and showed that side of him as a songwriter.

You're the only artist to be inducted in the Rock and Roll Hall of Fame three different times, and so far J.J. Cale is not an inductee. Do you think that's an oversight that needs to be changed?

Yeah, I would say it was a little bit careless. Maybe it's it's in the pipeline, but it's a shame that it would happen posthumously, seeing that he's been around all this time. I regard him as one of the roots of the tree of American folklore. There's not many people that have been able to stay the course in the way that he did and still have his finger on the pulse. When he was touring just a few years ago, I heard some live recordings where it just sounded like brand new, fresh versions of those songs. I suppose when we're fans of people, we want other people to recognize them, too. I know he wasn't that bothered, but I kind of was.

You recorded the album The Road To Escondido with him in 2006. What will you remember from those sessions now that J.J. is gone?

His extraordinary sense of humor, his skill, his tenacity. The word out about J.J., if you didn't know anything about him, was that he was reclusive and shy. But if you got him in the company of his friends and with other musicians, he liked to have fun.

So this image of a reclusive loner up in a cabin, it's a bit of a false, media creation?

This may sound like a silly question, but did you learn anything from him on that session?

You know, my problem with these kind of things is that I get so nervous. Am I saying the right thing? Am I playing the best I can? Am I being contributive? So I kind of wasn't watching well enough. It's difficult to be in the moment with what you're trying to do and also observe someone else, too. I suppose, if anything, what he taught me about making music on the floor in the studio was go for what felt right, and don't labor the point.