Accessibility links
Plot To Poison Famed French Wine Makes For Gripping (Pinot) Noir In Shadows in the Vineyard Maximillian Potter tells the true story of the legendary Romanée-Conti vineyard — and how it was held up for a 1 million euro ransom. 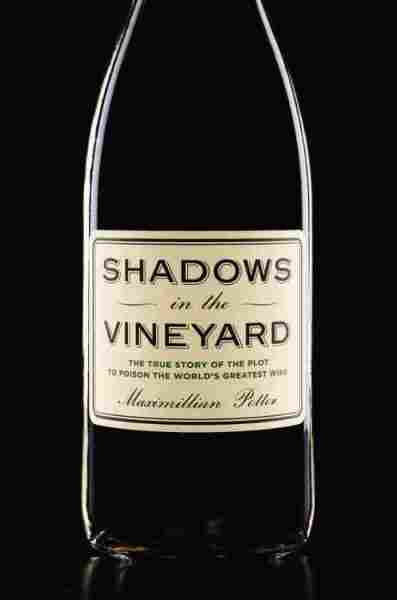 Shadows in the Vineyard

Romanée-Conti — a legendary French vineyard — produces one of the most elegant and extravagantly-priced wines in the world. In January 2010, proprietor Aubert de Villaine received a threat to his livelihood, if not his life: Pay more than 1 million euros in ransom, or his Burgundy vines would be poisoned.

Maximillian Potter first wrote about this plot for Vanity Fair and has now authored a book called Shadows in the Vineyard: The True Story of the Plot to Poison the World's Greatest Wine.

This wine, he tells NPR's Scott Simon, is really something special: "Without being overly hyperbolic, it's definitely the finest flavor I've even had in my mouth," he says. "I drank it and ... I was immediately filled with an incredible warmth. It just seemed like something that was alive and wonderful and warm."

Before I went to Burgundy and I had the opportunity to meet him, in my mind's eye, I saw, you know, a soft palmed, ascot-wearing French aristocrat who probably didn't spend too much time in the vines and delegated the real work. And, when I met him, within a very short period of talking to him, it was abundantly clear to me just how wrong I had been. He's one of the first to work in the morning, he's one of the last to leave. He drives the French version of a very economically priced station wagon. I thought of him at different times as a kind of Sam Walton almost in terms of his work ethic and demeanor.

Well, first he looks at the map and he recognizes it immediately to be a map of Romanée-Conti, the crown jewel of France's vineyards, and certainly his crown jewel of the Domaine de la Romanée-Conti. He sees a very detailed drawing of the vineyard, every single vine is marked. And then he opens a note and it informs him that there's a plot underway that is attacking his vines and that if he wants his vines to live, to stay tuned for another note ... [that would] make clear their demands and how those demands could be met.

After Monsieur Aubert de Villaine received the first note, his initial reaction was to dismiss it as a joke in horribly bad taste. When he received the second note, which laid out, in its certain terms just exactly what was going on and foreshadowed the possibility of the devastation in a way that Monsieur de Villaine could not ignore.

After Monsieur Aubert de Villaine received the first note, his initial reaction was to dismiss it as a joke in horribly bad taste. When he received the second note, which laid out, in its certain terms just exactly what was going on and foreshadowed the possibility of the devastation in a way that Monsieur de Villaine could not ignore. Then he began to think about: How do I deal with this.

And so he didn't mess around; he called the French version of the FBI, which was the Police Nationale and within minutes of talking with Monsieur de Villaine the inspector on the other end knew right away how serious this was. And he went to the head of the Police Nationale who at the time, was a fellow by the name of Christian Lothion. And he dispatched his best investigators from Paris to Burgundy to oversee this investigation.

On a few wild goose chases

The investigators had quite a few wild goose chases. And the first one was ... the police were tracing one of the packages through the French version of Federal Express. And there was a coding mistake that was made and they descended on this one poor fellow who was coming home from work at a plumbing supply shop. And it turned out that he was ordering ... a PlayStation. And just when the police were starting to get demoralized is when they had their breakthrough.

On setting up a sting operation

The investigations after several goose chases were reaching a point where they really were beginning to turn their attention toward the serious possibility that there was an inside job. At that moment, they received the final of several notes from the bad guys. And it directed them to place 1 million Euro, in cash, in a suitcase and deliver to a cemetery in the town of Chambolle-Musigny, which is a small hamlet just to the north of Vosne-Romanée. The plan was that because Monsieur de Villaine was out of town, Jean-Charles Cuvelier, his right hand man, volunteered to be the bag man. He carried in a bag of counterfeit cash into the cemetery. And shortly thereafter, one of the bad guys emerged to come and collect it. And that was the beginning of the end.

On the man who was ultimately arrested

He wasn't the sharpest knife in the drawer. His name is Jacques Soltys. The plan that he enacted really wasn't his idea. He had been a career criminal [or rather] he was a career prisoner ... and during his last stint inside, someone gave him the idea: Hey, in Burgundy they treat their vineyards as sacrosanct. And most of them are French noblemen and aristocrats, they don't like gossip. They are wealthy; you could probably extort them, threaten them and get them to pay you just to have [you] go away.

Once basically the plan became his, he undid himself and he's the guy who planned the bag drop-off in the cemetery in the middle of the night. ... They could have done a digital transfer. He set himself up for failure, for sure.

On the value of Romanée-Conti today

I think there's a renewed appreciation for what it represents — and for the philosophies and spirituality and tenderness and care and history that are all tangled in the vines of Romanée-Conti.