Accessibility links
First Listen: Adult Jazz, 'Gist Is' This English band's ideas move fast — riffs erupt only to disappear just as quickly. It's as though they're chasing super-concentrated bursts of bliss that gather into epic music. 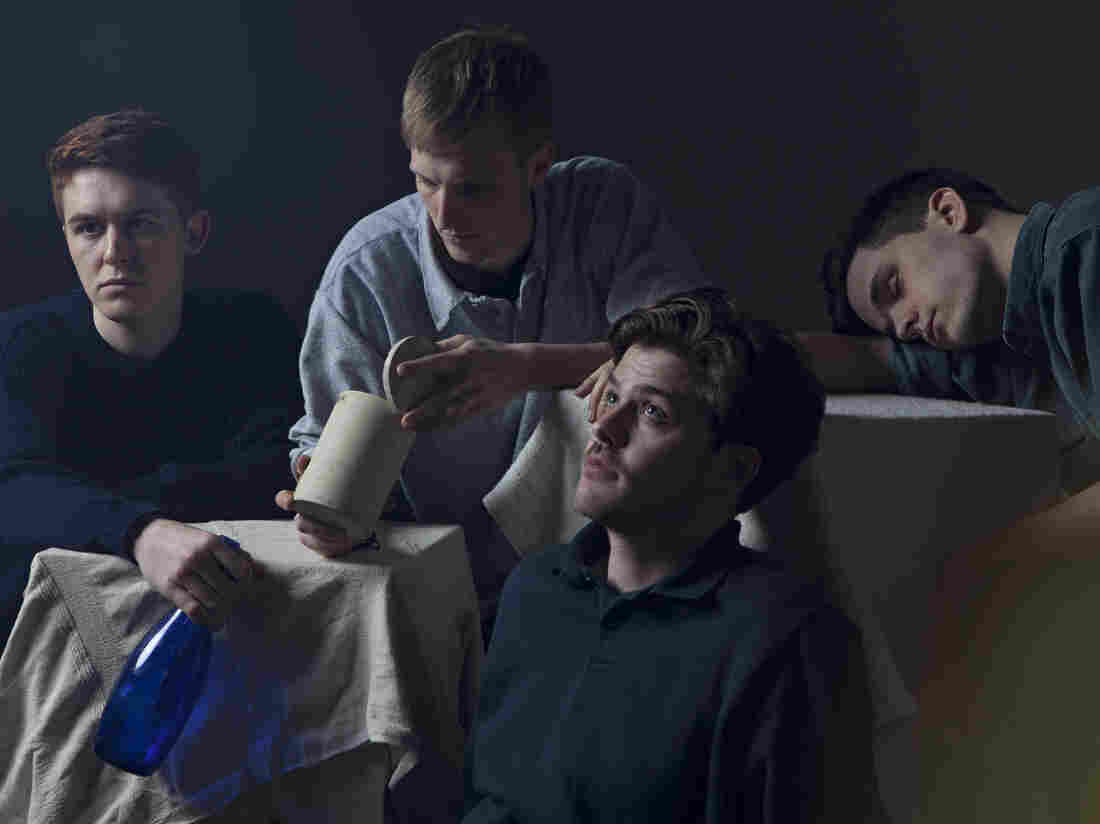 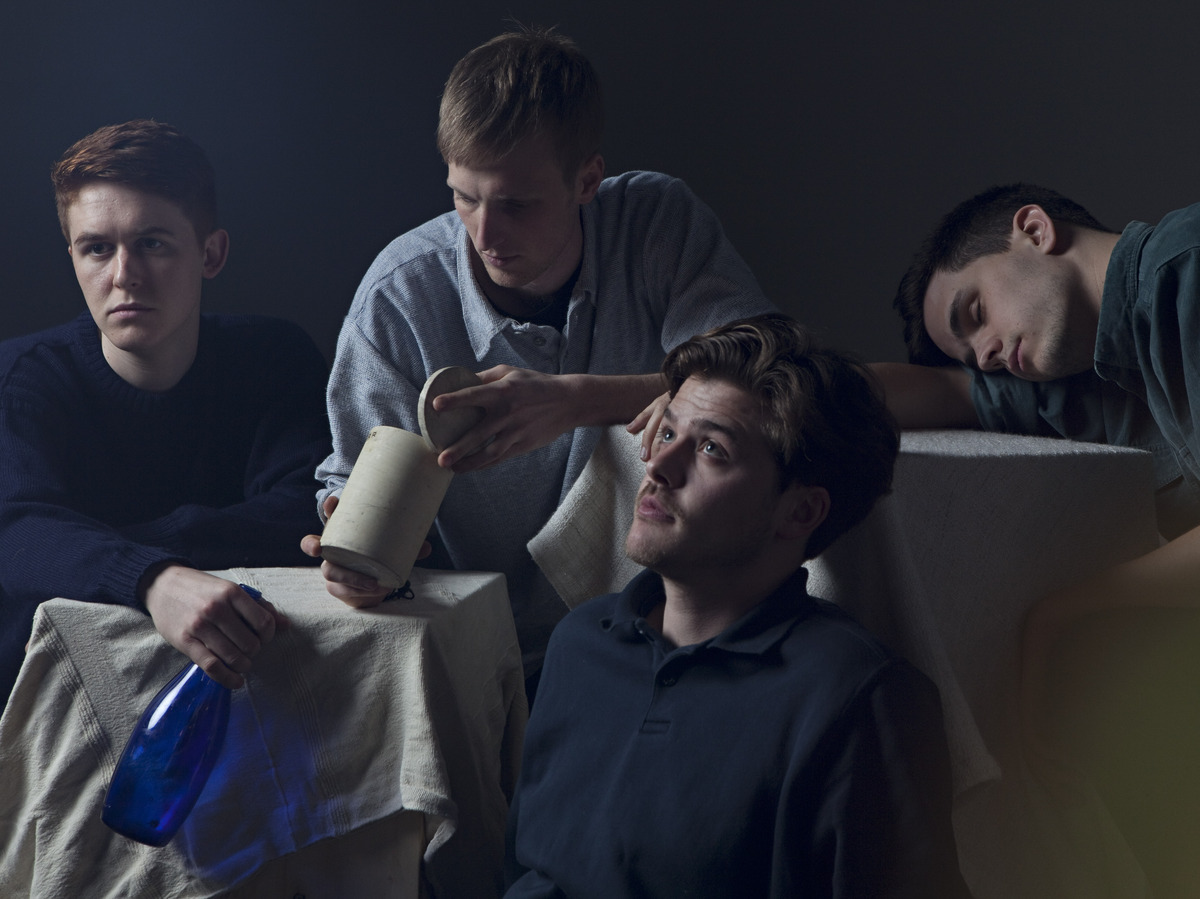 James Pearson Howes/Courtesy of the artist

To music obsessives of a certain age, the current generation of listeners sometimes appears as lightweight grazers at the Internet smorgasbord who seem unwilling (possibly unable) to focus attention at depth on a single piece of music. The summary dismissal: The kids today, they can't handle all of what somebody like a Frank Zappa (or a band like King Crimson) throws at them.

It's a reckless, ageist generalization. But as often happens, it carries a shred of truth. Zappa exists now as a ghost, a figure on the margins of music discourse whose significant contributions are savored by an elite few. That's perhaps because his intricate, idea-crammed compositions require a bit of patience and listening skill to fully appreciate. And let's face it, those skills are in short supply — listeners want the "Happy" hook that arrives right on schedule. Even indie-rock snobs have a soft spot for the instant eureka moment payoff.

This does not augur well for the commercial prospects of Adult Jazz, a four-piece from Leeds whose debut, Gist Is, is filled with intricate, idea-crammed, expectation-defying compositions. It's a dizzying work that, like jazz itself, doesn't always charm instantly; it takes a bit of work to warm up to it.

The album begins with an instrumental drone and three full minutes of somber, highly processed vocalizing from frontman and lyricist Harry Burgess. The drone sets an odd scene, transporting listeners away from the chatter of the moment and into an abandoned place of worship where Gregorian chant once rattled from the rafters. Burgess' fluttery voice and strange groupings of words extend the sense of mystery, and when the drums finally kick in, with a fitful pulse that doesn't immediately sync up into something as obvious as a 4/4 beat, the message is clear: It's time to abandon hope for the ear-candy refrain that will snap things into focus. The governing structure of "Hum" is not your typical verse-chorus pathway, but rather a swervy series of stream-of-consciousness melodic inventions, some more accessible than others. When the sassy marching band trombones arrive, at 5:57, the listener has had plenty of warning. You have to be ready for anything, be it liturgical song or a nasty New Orleans groove.

Adult Jazz doesn't sound like Zappa. (Or, for that matter, much like a band that is often mentioned as kindred, Dirty Projectors.) But its endeavor shares Zappa's subversive irreverence and his belief that disparate and severely mismatched musical elements can, if linked together properly, open up new sonic landscapes. Even before track two starts, the casual listener can sense there's a cagey, astute musical sophistication at work on the structural level.

Motifs and narrative ideas move fast in the Adult Jazz maelstrom; riffs erupt, take center stage for a minute and then just as quickly disappear. It's as though the four-piece, which writes the music collectively and in live performance is prone to switching instruments mid-song, is chasing super-concentrated bursts of bliss — fleeting episodes rather than extended explorations. It just so happens that when they're strung together like pearls, some of those episodes gather into music that's epic, both in length and scope.

The rivetingly filmic "Spook" lasts nearly 10 minutes, and throughout the excursion, there isn't much in the way of recurring melodies. "Idiot Mantra" situates lovely ethereal vocal riffs ("my heart, it is spinning all over the ground") against a purposefully pounded tribal drum pulse. As the piece unfolds, Burgess goes from singing in measured cadence to riffing like a jazz cat through polyrhythms that rachet up the tension.

The ecstasy-glimpsing "Donne Tongue" unfolds its sideways homage to the metaphysical poet and cleric John Donne in just under six minutes, but it feels longer. What begins as a spry shuffle grows darker as electric guitars galumph and grind into the forefront. As happens elsewhere, Burgess' vocals reflect and reinforce each new musical wrinkle — even if you don't like all the abrupt gearshifts, his array of personas and emotional nuances is impressive and captivating.

In interviews, Burgess has said that there are unifying themes running through the lyrics of these nine densely packed songs — among them, the challenges of communication, empathy, morality and the search for meaning in life. At first these lofty notions didn't register with me; only after listening several times, and actively tracking the trippy wordplay, did this narrative thread become apparent. Which is to say there are layers in these songs, and strange juxtapositions of images within the verses, and then big "meta" contrasts between text and musical accompaniment. It's trippy to encounter a song that talks about what constitutes a right way to live propelled by music that breaks the rules with such delighted giddiness.

Thing is, even as it makes a kind of weirdness Zappa could dig, Adult Jazz does not serve it up by the pound. This band deploys its quirkiest quirks with surgical precision. What sounds, at first, like circus-sideshow novelty music acquires dimension over time, often becoming disarming and profound on subsequent listens. There's so much going on, in fact, it can be hard to fix any given song's center. So take the album title as one more bit of flimflammery. This music rambles and sprawls in ways that mock the notion of a well-defined and neatly encapsulated "gist."

Maybe Adult Jazz is saying that we lose something important by cutting to the chase all the time. Maybe our perpetually time-strapped mode of discourse prevents us from fully engaging the wonder and illumination that surrounds us. Then again, maybe it's all a slipstream. Maybe there is no gist.