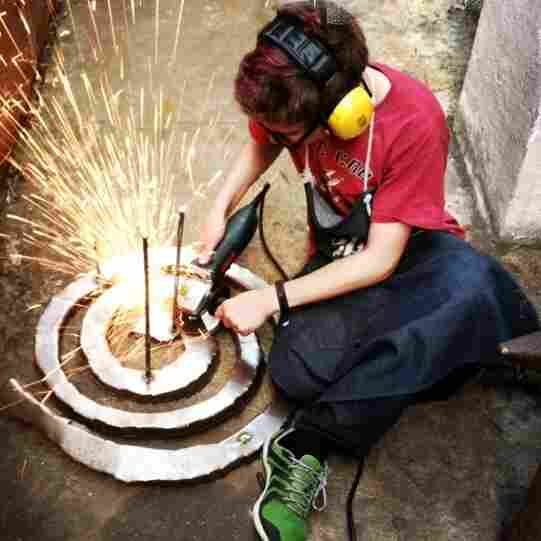 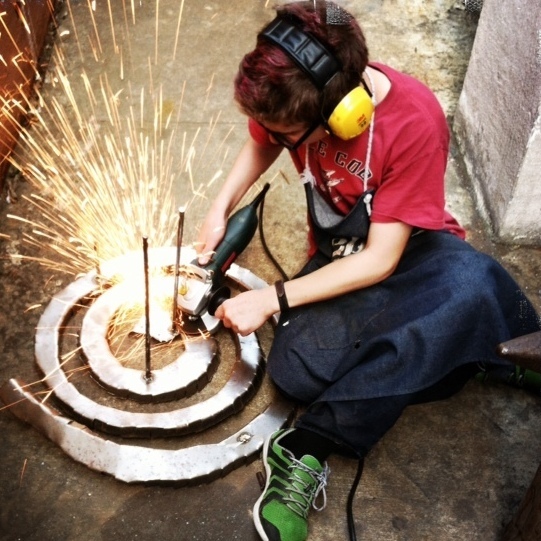 At East Bay School for Boys, sometimes the sparks of inspiration result in, well, actual sparks.

This summer, All Things Considered has been taking a look at the changing lives of men in America. And that means talking about how the country educates boys.

In Berkeley, Calif., a private, non-profit middle school called the East Bay School for Boys is trying to reimagine what it means to build confident young men. In some ways, the school's different approach starts with directing, not stifling, boys' frenetic energy.

"I think boy energy has been misunderstood," says Lisa Hayle, a language arts teacher at the East Bay School. "Instead of squelching their enthusiasm for things, at our school we channel it and work with it."

The East Bay School is not a traditional boys school, aimed at reinforcing typical ideas of what it means to "be a man." The school's director, Jason Baeten, says that the goal is instead to create an educational space where boys can make mistakes, be vulnerable and learn to be self-reliant.

Baeten says, "We all came together and decided what we wanted our graduates to look like, what qualities we wanted them to have. So, things like: respects women, flexible, resilient — all of these."

One of the ways that the school is trying to upend tradition is by re-inventing shop class for the 21st century. In fact, they don't even call it "shop." At the East Bay School for Boys, it goes by a different name: "work."

David Clifford, the school's director of innovation, explains why: "We moved away from the language of shop because it has a history behind it, where for decades now, shop has been considered second or third tier in education, where first tier is academics."

Shop classes have dropped off the curriculum at high schools nationwide. In Los Angeles, for instance, around 90 percent of traditional shop classes have been eliminated.

Now, something called "career and technical education" still exists. In fact, this week President Obama signed a law encouraging the expansion of such programs. But the most popular classes nationwide are health science, information technology and business — not vocational, blue-collar training like carpentry or auto shop.

At East Bay, "work" is one of the six main classes all boys take, right alongside math and language arts. Boys build their own cubbies, desks and benches. One student, Jaden Yu, is building a massive metal hammer as part of a larger project in which boys imagine themselves as superheroes.

And they tie this work into a larger curriculum, too. In one instance, boys built replica Civil War officers' chairs which were paired with biographies of the officers who sat in them.

Clifford says teaching these kinds of hard skills is vital, for boys and girls. Not only do they graduate knowing how to use a table saw and welder, but Baeten says the work fosters creativity and resilience.

Those tools are sometimes dismissed as "soft skills" by educators pushing a greater emphasis on hard academics. But Baeten says those kinds of skills, including empathy, are central to the school's mission. "The real important part about being a man is taking accountability for your actions, living your life really fully in a really present way and loving people fully."

As a private school in the Bay Area, though, East Bay is not cheap. Families pay more than $21,000 a year to send their sons here. But they've also made an effort to make sure their vision of masculinity isn't just for the privileged. More than half of students here get some type of tuition assistance. More than 70 percent come here from public schools. And nearly half of the boys here identify as non-white or mixed race.

The East Bay School's program is new, having only opened classes in the fall of 2010. The school's holistic view of boyhood — spanning academic to social development — is still evolving.

The big question is: Can aspects of East Bay's more holistic approach to educating boys work elsewhere, especially in America's public middle schools? The statistics can be sobering for a boy in public school. Boys drop out of school and get suspended at much higher rates than their female counterparts. Federal statistics show that among those who are suspended multiple times and expelled, 75 percent are boys.