Accessibility links
Sex And The Single Churl: Another 'Bachelorette' Finale Gets Weird Monday night's Bachelorette finale went in a very unusual direction for a show that usually denies the degree to which it's about sex.

Sex And The Single Churl: Another 'Bachelorette' Finale Gets Weird

Sex And The Single Churl: Another 'Bachelorette' Finale Gets Weird 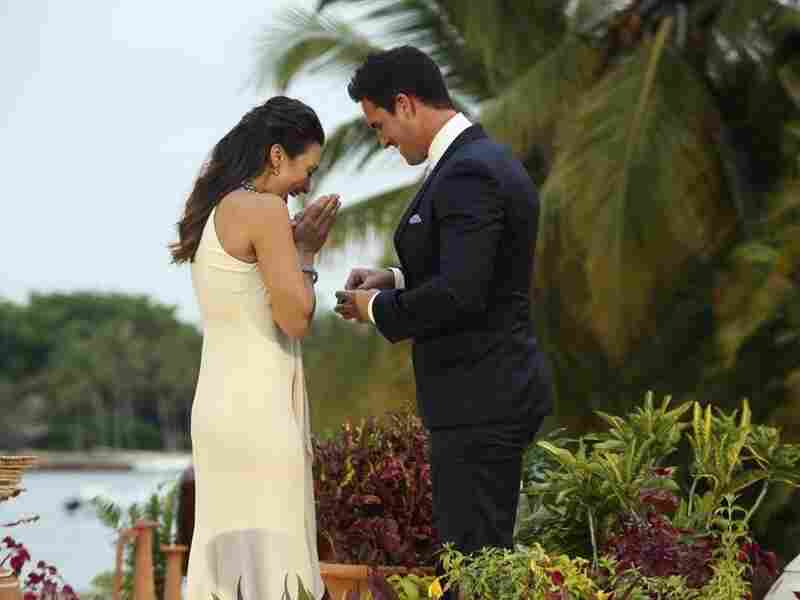 Andi gasps while accepting a proposal from Josh Murray (right, in the ill-fitting suit) on Monday night's finale of The Bachelorette. Javier Pesquera/ABC hide caption 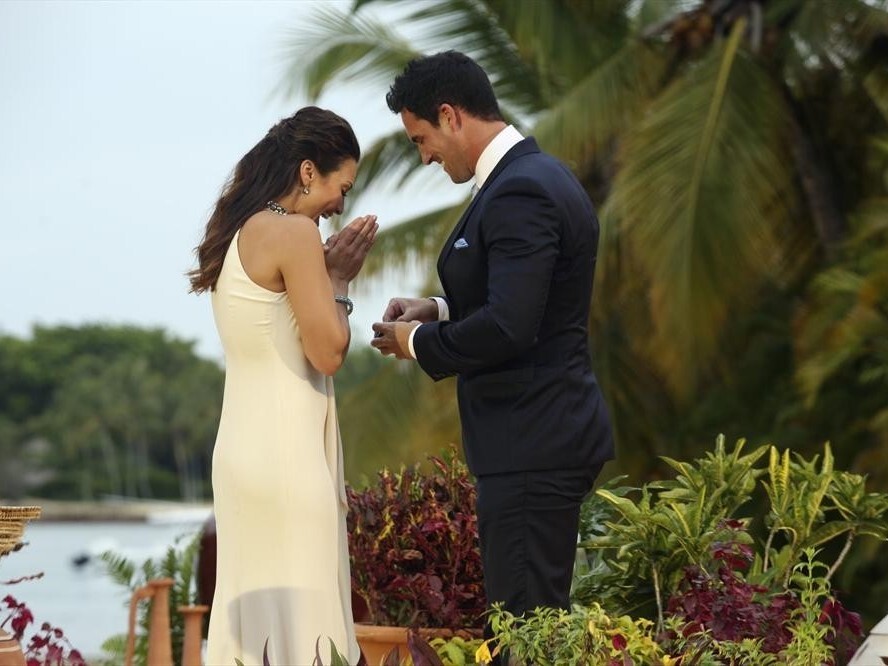 Andi gasps while accepting a proposal from Josh Murray (right, in the ill-fitting suit) on Monday night's finale of The Bachelorette.

After the fact that it's a blatant and ridiculous fraud (in that it almost never gets anybody married), the first thing you might notice about The Bachelor(ette) franchise is its prim, Victorian attitudes about sex. For a show that encourages 14-person dates and the temporary negotiation of a lifestyle that could be best described as G-rated swinging, the whole shebang is awfully precious when it comes to the fact that sometimes, some of these people have sex with each other.

The having of sex generally makes its official arrival in the narrative each season at the point where the Bachelor or Bachelorette (let's say Bacheloron) has three Strivers left to choose from. These are the ones who go on "overnight dates." At an overnight date — and the more you hear this explained, the more creepy and clinical it will sound — the couple opens a sealed note from host/procurer Chris Harrison, who instructs them that they may spend the night in separate rooms or together in the "fantasy suite." The fantasy suite is not filmed, meaning that it does give couples the chance to spend at least a little bit of time alone before they decide to get married (!), but the unspoken purpose of the fantasy suite is, unambiguously, that you can have sex in it before the final decisions get made.

Instead, there is a sort of strange agreement that although everything else, including engagements and breakups, is entirely public, you have a right to secrecy when it comes to who did what with who. We will follow a sad person into a limo to cry and collapse, but whether you kept your underwear on is for you to take to the grave.

That's what made Monday night's finale and post-show live update so surprising.

Generally, the way a Bachelorette season works is that each of the final two men has a private moment with the Bachelorette in which they propose to her, and she says yes or no. The analog in a Bachelor season is that each woman goes to find out whether he's going to propose or not. (If you have noticed that you commit a final act of either acquiescence or decisiveness depending on whether you are a boy or a girl, you win $20,000 in imaginary Bachelor Bucks in the Spot The Freakazoid Gender Politics Up In Here Sweepstakes.)

This year, however — and she was not the first to do this — Bachelorette Andi decided that since she already knew she wanted to marry giant-toothed former baseball player Josh, she would spare Wisconsin native Nick the trouble of picking out a ring and putting on a suit. So she went to see him and told him that it wasn't him, he was not the guy, and she would be giving her final rose (...never mind) to Josh.

Nick, who had been feeling pretty confident, looked devastated. He kept struggling like he was trying to say something to Andi, and as I watched him squirm and seemingly bite his tongue, I came up with a stone-cold guess regarding what his deal was.

I suspect the thing Nick is not saying is that he believes she had sex or sex-ish contact with him under false pretenses. #TheBachelorette

Finally, after way too much pointless dumpsplaining on Andi's part, she left. She went off to see Josh, they got engaged, they kissed with such lip-smacking ferocity that it sounded like somebody was climbing the Empire State Building with suction cups on his hands and feet, and it was over.

Buuuuuuut it wasn't, quite, because there's always the hour they call After The Final Rose, presumably because Brand Extension and Just Leave It On This Channel And Rest Your Fingers, Baby seemed tacky. During that hour, we typically get to catch up with the couple to see whether they're still together (sometimes they're not) and happy (sometimes they're not), but we also check in with the runner-up to see whether he or she has recovered (sometimes s/he has not). This time, there was lots of buildup about the fact that Nick had tried to get Andi to meet with him in person earlier to ... maybe explain the breakup more? ... and she'd declined. So Nick had given Chris Harrison a letter to hand to her, which was written on notebook paper, because apparently he wrote it during homeroom. This would be Nick's big chance to confront Andi.

For a brief moment, it seemed like Nick was going to think better of all this confrontation. Rather than demanding answers, he thanked her for opening him up to the idea that he could feel love. She encouraged him to stick with that idea.

It was not to be. Nick had more to say. Many of those at home hoped he would not say it, whatever it was. STOP, NICK, we thought. STOP WHILE YOU CAN STILL STOP.

[Please note that as I rewatched the clip to add that quote, my shoulders involuntarily hunched up to my ears.]

Andi bristled at this, saying that seemed "below the belt" and like something that should be private, which is both kind of crazy and perfectly logical. In a way, they're less far apart here than they seem: Nick thinks he's arguing an old-fashioned view in which sex means something, at least when one person has declared himself to be in love, so one doesn't play with someone else's feelings by engaging in it when to do so might be misleading. Andi thinks she's arguing an old-fashioned view in which one does not kiss and tell, particularly about a relationship that's over, particularly during something that is mostly supposed to be a happy celebration of a new relationship. They both would claim that they're arguing simple sexual ethics — simple good bedroom manners.

The problem is that this is not a simple situation. This is a situation massively complicated by the fact that — oh, right — it took place within a completely artificial environment in which people have already waived all kinds of expectations they would normally have when it comes to sexual ethics. Andi has already agreed to reveal far more about her romantic and sexual life than she would if she weren't doing all this on television. Nick has already agreed that he will participate in a contest in which there will be, at the end, a loser — someone in precisely his position, who is in love and is essentially strung along until the very end and then dumped. She's already waived, up to a point, "what's private is private," and he's already waived, up to a point, "don't mislead me."

But because sex has always lived in such a bizarre part of Bachelor World, both used for titillation and withheld from view as part of a respectful pantomime of romance, it affects the dynamic in unexpected ways. It was hard to avoid the feeling that while Nick might have been justified in feeling icky about having had sex with her when he didn't realize she intended to dump him, bringing it up on live television was more about embarrassing her; otherwise, why break the unwritten rule that what happens in the fantasy suite is only vaguely alluded to outside the fantasy suite?

Part of the weird appeal of this show, admittedly, is its tendency to stumble, entirely unwittingly, entirely without sophistication, into actual brambles involving sex and gender. Little conversations about who would move to be with whom, little exchanges with parents, little turns of phrase (Josh's repeated use of the expression "make her my wife" made me feel like I was watching a 1950s western) — it's all so fake, and yet it blunders into these wee little bursts of honesty.

The irony of the entire thing was that the bursting of this particular bubble, the abrupt abandonment of the unwritten rules about fantasy suite nondisclosure, might have seemed like an intrusion of modern vulgarity on the surface. But what Nick introduced was actually an extremely traditional cultural idea within our sense of how men and women relate to each other: the spurned partner who regrets having had sex when it turns out the feelings weren't reciprocated.

What's different is that in the traditional version of this narrative, this comes from the woman. Maybe Nick was trying to embarrass or shame her, maybe he was trying to make her uncomfortable. But if this had been the other way around — a woman complaining that a guy shouldn't have had sex with her if he didn't love her — there'd be no assumption that the revelation of sex itself was supposed to reflect poorly on him. It would be about false pretenses only.

It's almost impossible to imagine a man who chose to be the Bachelor setting his jaw and saying what Andi did about how revealing that they'd had sex was hitting below the belt. That's not because Andi is necessarily wrong or that her reaction is necessarily female; it's because within popular entertainment, there's almost no such thing as casting aspersions on men for the sex they're having, particularly within the confines of an arrangement like this, where everyone is on board voluntarily.

It's just ... strange. It's all strange. It's a prim undertaking with lots of bikini shots. It's an 8:00 p.m. show that sends people off to what might as well be called the Sex Lounge. It throws all kinds of stereotypes and nonsense into a blender and produces a simulacrum of traditional courtship with ten people at once.

And it almost never gets anybody married.