Accessibility links
The Great Blue Hope: Michelle Nunn Tries The Improbable In Ga. Georgia hasn't elected a Democrat to statewide office for over a decade, but Senate candidate Michelle Nunn is the most viable hope the party's had in a long time. 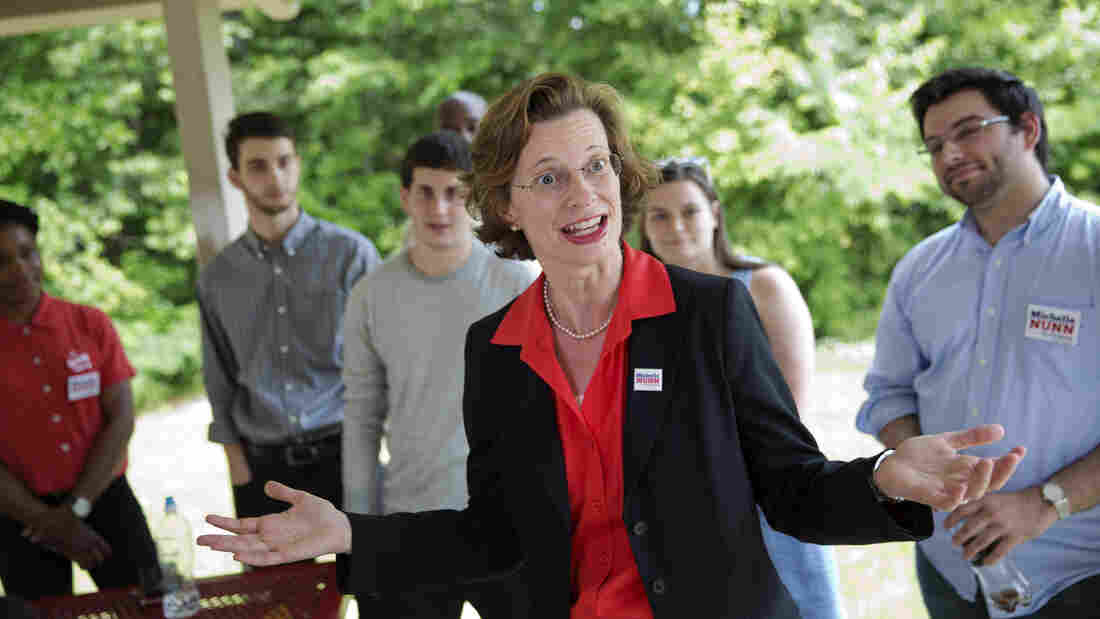 Georgia Democratic Senate candidate Michelle Nunn greets campaign volunteers at South DeKalb Community Achievement Center in Decatur, Ga., on May 13. The U.S. Senate race in Georgia is one of the most closely watched in the country. David Goldman/AP hide caption 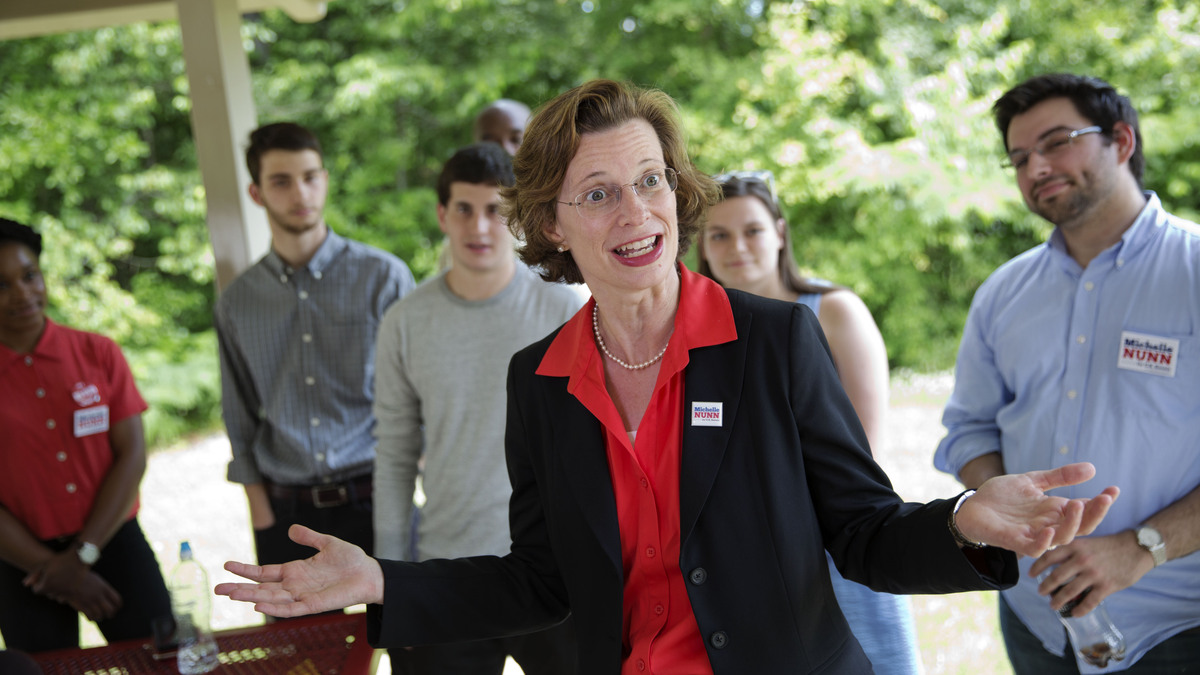 Georgia Democratic Senate candidate Michelle Nunn greets campaign volunteers at South DeKalb Community Achievement Center in Decatur, Ga., on May 13. The U.S. Senate race in Georgia is one of the most closely watched in the country.

Georgia has been considered safely red territory for more than a decade. But there's a new energy among Democrats in the state, where candidate Michelle Nunn represents the party's best chance of winning a Senate seat in years.

This is Nunn's first run for public office, but she's far from an unknown in a state where her father, Sam Nunn, is a Democratic icon who represented Georgia in the Senate for more than two decades.

Like her father, Nunn positions herself as a moderate Democrat, willing to reach across the aisle to work with Republicans. She is the former head of the Points of Light Foundation, a group that promotes volunteerism and was founded by George H.W. Bush. Her first TV ad featured a photo with the former Republican president.

"I hope again to bring a voice that says we actually need to collaborate and work together to get solutions, and it's not about antagonism and polarization," she says.

It's a message tailored to reach beyond her Democratic base and appeal to independents and moderate Republicans.

"It includes a spectrum of people who are long-term Democrats and people who are Republicans and have been voting Republican for a long time," Nunn says. "I'm hearing from people all the time that they are ready for a change. And it really does cross the political spectrum."

With her family connections, Nunn has received almost automatic respect and attention, facing only token opposition in the Democratic primary.

But on the other side, Republicans fought a bruising primary over the nomination to replace retiring GOP Sen. Saxby Chambliss. After two rounds of voting, the winner was someone with another familiar political name: David Perdue, a businessman and the cousin of Georgia's popular former governor, Sonny Perdue.

"I respect Michelle Nunn. I respect her work. I respect her family," he said. "But with my business career, I will prosecute the failed record of the last six years of Barack Obama."

Republicans talk about Obama more than Nunn does herself, notes Andra Gillespie, an associate professor of political science at Emory University. She says that's because Nunn is trying to walk a narrow line.

"Michelle's Nunn's challenge is ... to figure out a way to distance herself enough from the Obama administration that she can appeal to moderate undecided voters, but not do so in a way that she ends up alienating the Democratic establishment such that they don't help her out," she says.

That's perhaps a reason why Nunn so frequently discusses her position on the Affordable Care Act. She says she wouldn't repeal it, but believes Congress should look at it and "fix the things that aren't working."

But she's studiously avoided saying whether she would have voted for it in the first place.

The Nunn campaign is hoping to build on the support President Obama drew two years ago in Georgia, when he came within 5 points of winning without ever campaigning in the state. But Republican political consultant Todd Rehm wonders whether the moderate Nunn will be able to count on that support.

"Without a presidential race that brought out some new voters, some folks who had lapsed into inactivity, it's unclear how to get them enthusiastic if you're not willing to go to the mat for your president," he says.

But there's something that Republicans and Democrats agree on — Georgia's electorate is changing as its population grows, with the number of minority voters increasing and the proportion of white voters shrinking.

"People of color in Georgia tend to vote Democratic. If you're African-American, it's in the high 90s," explains Stacey Abrams, the House minority leader in Georgia's General Assembly and the first African-American elected to that position. "If you're Latino or Asian, it's in the 70s and 80s, which means those are voters that are most likely to be Democratic voters if they're talked to, if they're recruited and if they are turned out."

To mobilize those potential supporters, Georgia Democrats have been working since January to target and contact voters through phone bank and canvassing operations.

But to win, Nunn's campaign will also need at least respectable numbers among white voters. Early strategy memos for the Nunn campaign leaked to the National Review, a conservative magazine, said the Democrat would likely need to win at least 30 percent of the white vote.

As the fall campaign begins, Republicans believe they can dominate that segment of the electorate by tying Nunn to Obama and Senate Majority Leader Harry Reid.

Nunn, meanwhile, is trying to combine her appeal to new voters with the traditions cited in the Georgia state seal: "Wisdom," "Justice" and "Moderation."