Accessibility links
As Pharma Jobs Leave N.J., Office Space Ghost Towns Remain In the past 20 years, New Jersey went from having more than 20 percent of U.S. pharmaceutical manufacturing jobs to less than 10 percent. That means offices, labs and warehouses have gone dark. 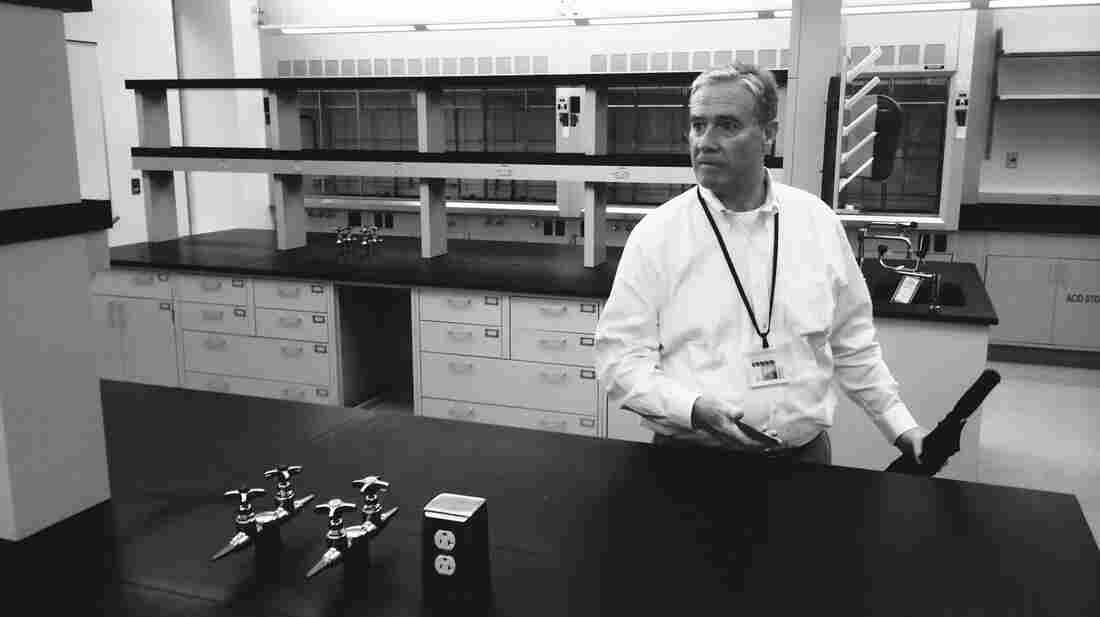 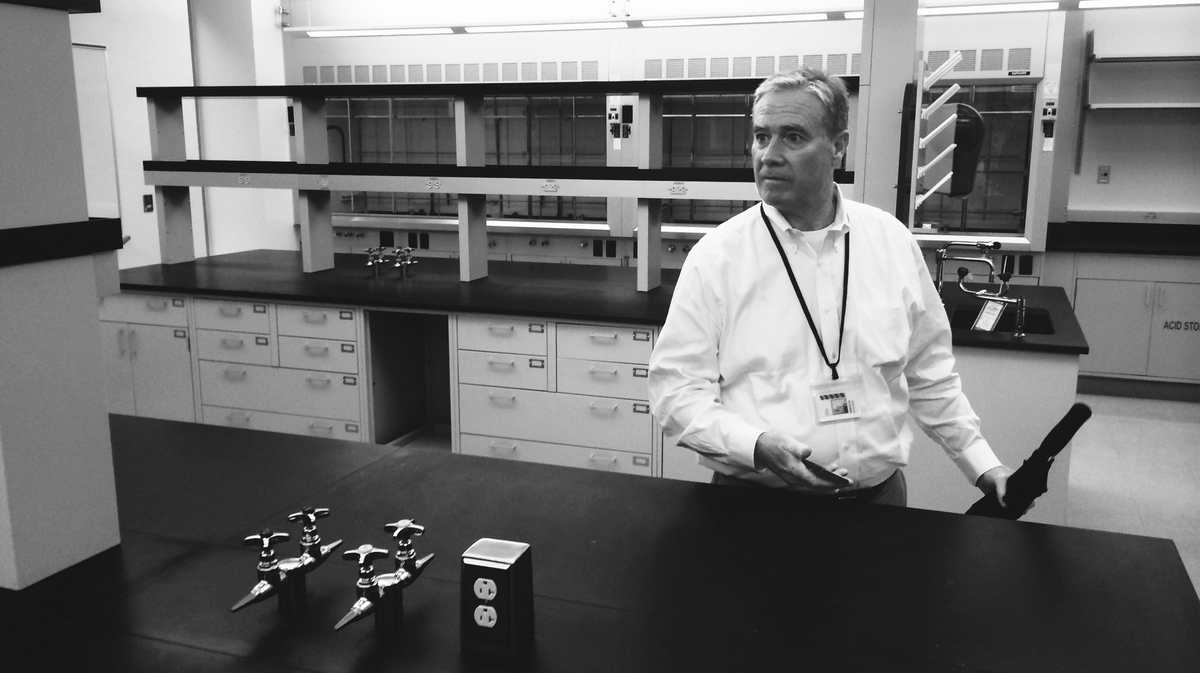 New Jersey used to be known as "the nation's medicine chest," but over the past two decades, many of the state's pharmaceutical industry jobs have dried up or moved elsewhere, and left millions of square feet of office space, warehouses and laboratories sitting empty.

One of those sites is the 116-acre corporate campus of the Swiss drugmaker Roche in Nutley, N.J. There are dozens of buildings on this campus, 10 miles west of midtown Manhattan. In fact, there are enough bio and chem labs, offices and auditoriums to fill up the entire Empire State Building. But since December, all of that space — 2 million square feet of it — has been vacant, the laboratories dark and the sidewalks deserted.

"When this was a thriving site, this sidewalk would have been busy with folks walking up and down," says Darien Wilson, one of just 38 Roche employees still working at the site as the company tries to sell the property. "We had great amenities for people, like on-site child care. You had dinners to-go where you could order food by lunch and take it home with you if you were working late. We had dry cleaning," she says.

Five years ago, Roche acquired Genentech, moved its management to San Francisco and started to slowly withdraw from New Jersey. That's a pretty typical story for what's been happening in the state. In the past 20 years, New Jersey went from having more than 20 percent of U.S. pharma manufacturing jobs to less than 10 percent.

"Essentially, every time there's a merger or one company acquires another company, there's a reduction in force, and there's been furious mergers and acquisitions in the pharma industry, particularly over the past 10 years," says James Hughes, dean of the school of public policy at Rutgers. 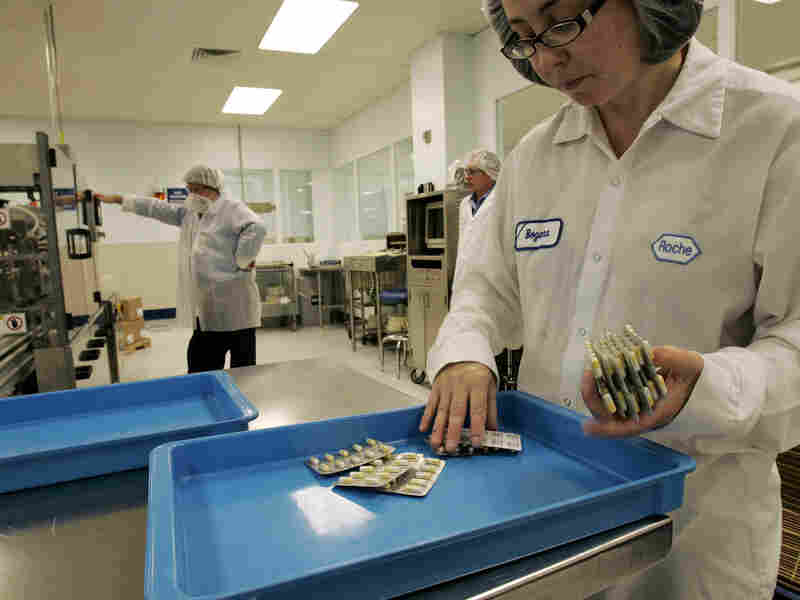 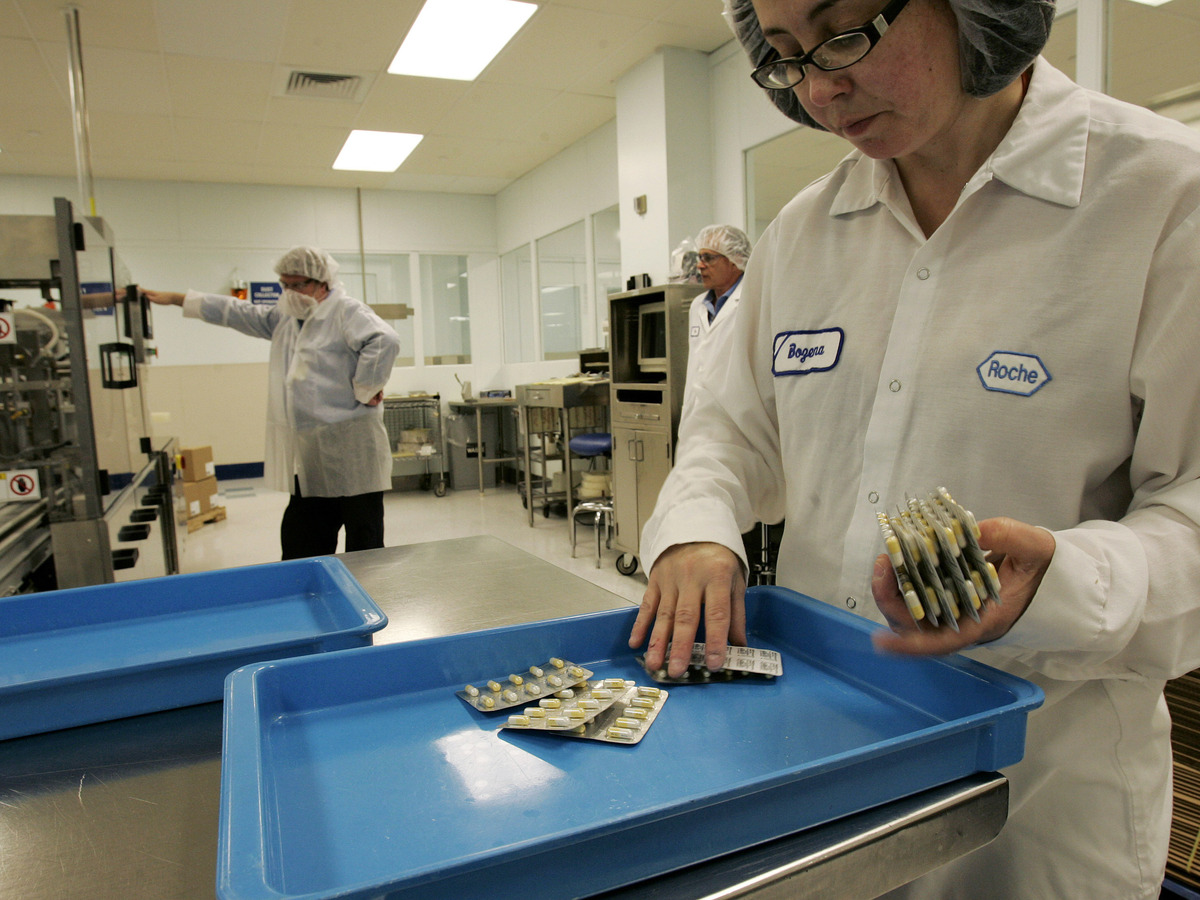 In 2009, Merck bought Schering-Plough, and Pfizer bought Wyeth. This year Pfizer tried to purchase the British drugmaker AstraZeneca. And the list goes on.

Business professor Erik Gordon of the University of Michigan says cutting-edge research isn't being done on closed campuses in the suburbs anymore.

"The new innovation in biotech, in genomics is happening elsewhere. It's happening in places where there are graduate educational institutions that have research faculty doing that, and New Jersey really doesn't have that," he says.

That's something Roche is acutely aware of as it looks for a buyer.

"What really sets this site apart is its location," says Tom Stanton of Jones Lang LaSalle, the real estate firm marketing the site.

The site is so big that to show it off, Stanton needs a minibus. Looping through a parking lot with thousands of empty spaces, Stanton stresses how close the campus is to Manhattan, Newark's airport and public transit.

"Hiring young, talented people is really important to these companies. And that population of upcoming talent is more into the city life," he says.

But even though it's only a good bike ride from Manhattan in a straight line, the Roche campus can feel far away from the city's pulse. Stanton says finding even a single tenant has been difficult. So far, he's shown the campus to 35 companies, and no deal yet.

The situation may be even worse for the Merck World Headquarters in Whitehouse Station, N.J. It's about 50 miles from Manhattan — making its 1 million square feet of space harder to fill.

But there may be an answer. The state's biotech firms are growing fast, and they may be future tenants for these big pharma campuses. But so far, they've only been leasing small portions of space. Stanton says that could work for something like Roche's Building 123, a six-story structure with a lot of lab space.

"That building [would] cost $600 million to re-create today," he says.

Young companies would love to get some of its lab space. But they don't need, and can't afford, the whole building. Stanton just has to find a way to carve it up and then get some companies to bite.