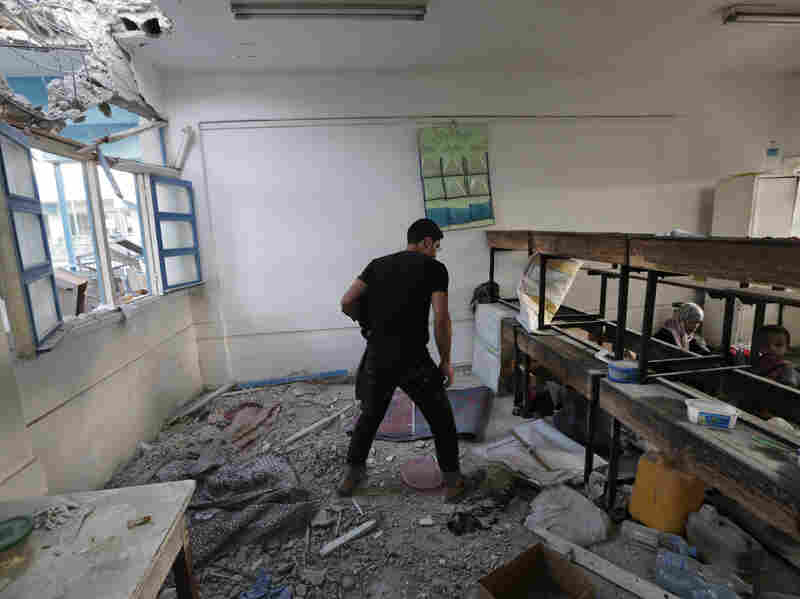 With displaced Palestinians still inside, a youth walks by the debris in a classroom at the Abu Hussein U.N. school in Jebaliya refugee camp, northern Gaza Strip, hit by an Israeli strike earlier Wednesday. Tank shells hit the school, where hundreds of Palestinians had taken refuge. Lefteris Pitarakis/AP hide caption 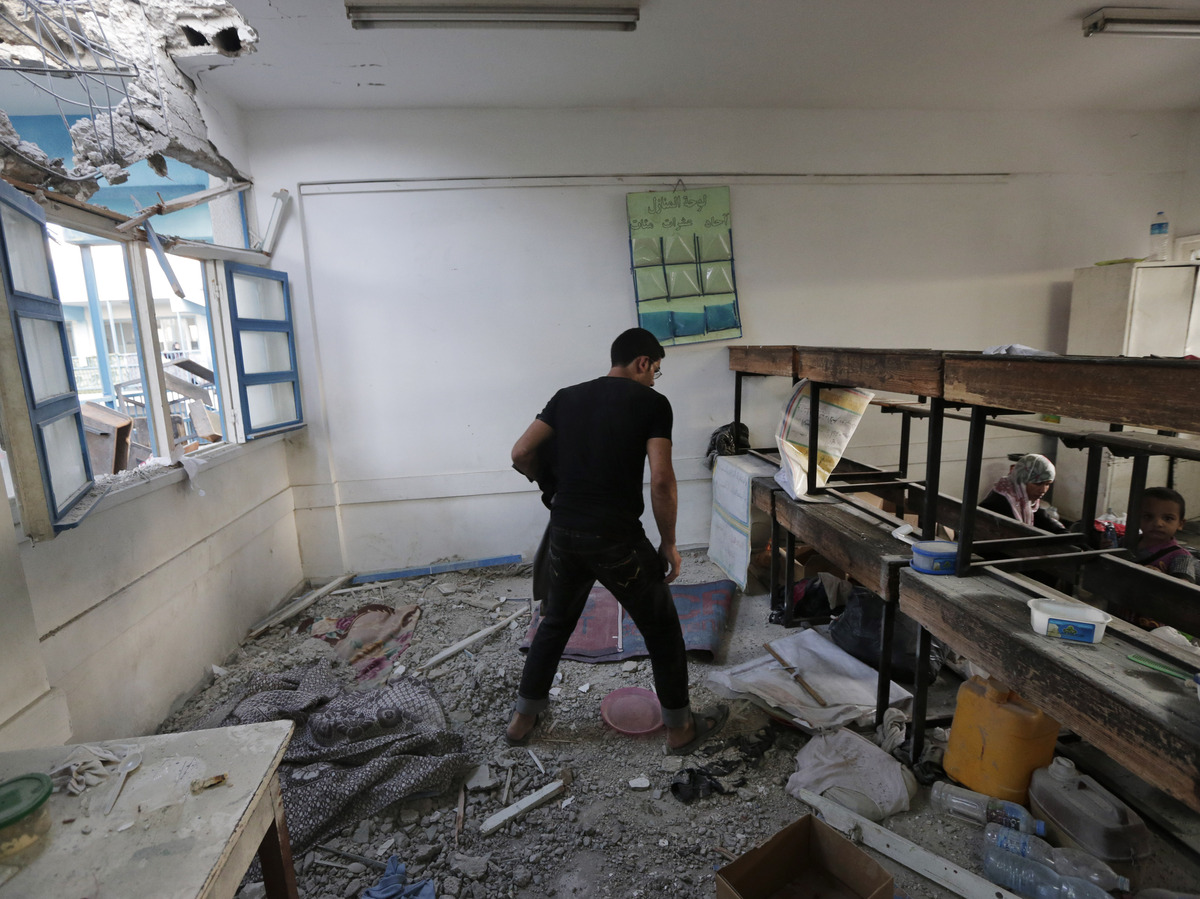 With displaced Palestinians still inside, a youth walks by the debris in a classroom at the Abu Hussein U.N. school in Jebaliya refugee camp, northern Gaza Strip, hit by an Israeli strike earlier Wednesday. Tank shells hit the school, where hundreds of Palestinians had taken refuge.

Israeli tank shells slammed into a crowded U.N. school Wednesday sheltering Gazans displaced by fighting, killing 15 and wounding 90 after tearing through the walls of two classrooms, a spokesman for a U.N. aid agency and a health official said.

The Israeli military said mortar shells had been fired from near the school, and that soldiers fired back.

The new violence further dimmed hopes of a cease-fire.

The strike at the U.N. school in the Jebaliya refugee camp came as part of Israel's heaviest air and artillery assault in more than three weeks of Israel-Hamas fighting.

The Israeli campaign escalated on Tuesday, with airstrikes destroying key symbols of Hamas power, including the home of the top Hamas leader. Gaza's only power plant was shut down after shells set its fuel tank on fire.

On Wednesday, Israeli aircraft struck dozens of Gaza sites, including five mosques it said were being used by militants, while several other areas came under tank fire.

In Jebaliya, tank shells hit the U.N. school before dawn, said Adnan Abu Hasna, a spokesman for the U.N. Relief and Works Agency. The agency is sheltering more than 200,000 people displaced by the fighting at dozens of U.N. schools across the coastal strip.

Assad Sabah said he and his five children were huddling under desks in one of the classrooms because of the constant sound of tank fire throughout the night.

"We were scared to death," he said. "After 4:30 a.m., tanks started firing more. Three explosions shook the school."

"One classroom collapsed over the head of the people who were inside," he said.

In one classroom, the front wall was blown out, leaving debris and bloodied clothing. Another strike tore a large round hole into the ceiling of a second-floor classroom. The wall of the lavatories was also damaged.

The Israeli military said it fired after its soldiers were targeted by mortars operating from the vicinity of the school.

"In response, soldiers fired toward the origins of fire. And we're still reviewing the incident," the military said in a statement.

About two hours after the strike, hundreds of people still crowded the school courtyard, some dazed, others wailing.

Four of the dead were killed just outside the school compound, two in their home nearby and two in the street, after returning from pre-dawn prayers, their relatives said.

The bodies of two members of the al-Najar family, 56-year-old Shaher and his 41-year-old brother, Bassem, were laid out in one of the rooms of their small home, surrounded by wailing relatives. Outside the gate, another relative held on to his crying son, hugging him tight and saying: "I'm here, I'm not going anywhere."

Abu Hasna, the U.N. agency spokesman, said the international community must step in.

"It's the responsibility of the world to tell us what we shall do with more than 200,000 people who are inside our schools, thinking that the U.N. flag will protect them," he said. "This incident today proves that no place is safe in Gaza."

Ashraf al-Kidra, a Gaza health official, said at least 15 people were killed and about 90 wounded in the school strike.

In all, 55 Palestinians were killed by airstrikes and tank shelling in different areas of Gaza on Wednesday, al-Kidra said.

In the southern town of Khan Younis, 10 members of one family were killed when an airstrike hit a relative's home where they had sought refuge from the fighting, al-Kidra said.

After the strike, relatives climbed over large piles of debris, surveying shattered windows and demolished walls.

"When the strike happened, I was sleeping, me and my brother and one of my relatives, we were sleeping. And we tried to look through the window to see what happened. But we couldn't see anything because of the smoke. And when we came down, we saw everything was damaged," said Mohammed al-Astal, a relative.

In the Gaza City neighborhood of Tufah, shelling killed at last seven members of another family, including four children, said Ayman Sahabani, the head of the emergency room at Gaza's Shifa Hospital.

The total number of Palestinians killed since the start of fighting July 8 rose to 1,284, al-Kidra said. In addition, more than 7,100 Palestinians have been wounded.

Israel has said its Gaza operation is meant to stop Hamas rocket and mortar fire that has reached increasingly deeper into its territory and to destroy a sophisticated network of Hamas military tunnels used for attacks in Israel.
Gaza militants have fired more than 2,600 rockets toward Israel over the past three weeks, according to the Israeli army.

The Israeli military has said it is hitting targets linked to militants, such as rocket launching sites, weapon depots and Hamas military tunnels. Over the past 23 days, Israeli forces have hit 4,100 targets in Gaza, about one-third connected to the militants' ability to launch rockets at Israel, a statement said.

The military has not provided details on strikes in which multiple members of one family were killed. There have been several dozen such strikes, according to the Palestinian human rights group Al- Mezan.

The military says Hamas militants often launch rockets from crowded residential areas, thus endangering nearby civilians. The army says it has also given civilians a chance to leave dangerous areas by sending warnings in phone calls and leaflets.

On Wednesday, aircraft dropped leaflets over Gaza City's Rimal neighborhood. The leaflets urged residents to stay away from Hamas militants and to report possible rocket launches. The leaflet gave a contact phone number and email.

"The Israeli Defense Forces are going into a new phase in the coming operation and does not want to harm civilians," the leaflet said. "The army is warning residents in the areas where the operation will take place that for your safety, you have to keep away from terrorists and the locations from which they operate."

Separately, Israeli troops in Gaza's border areas are searching for Hamas military tunnels used for carrying out attacks in Israel. Israeli leaders have said troops would not leave until all the tunnels have been demolished.
The army said 32 tunnels have so far been located but did not say how many remain. Since Tuesday morning, troops have demolished three more tunnels, a statement said.