Accessibility links
Grocery Chain Workers Want Their CEO Back Arthur T. Demoulas, chief executive of the New England grocery chain Market Basket, was pushed out by his cousin in a boardroom struggle. Protesting employees have brought business to a standstill. 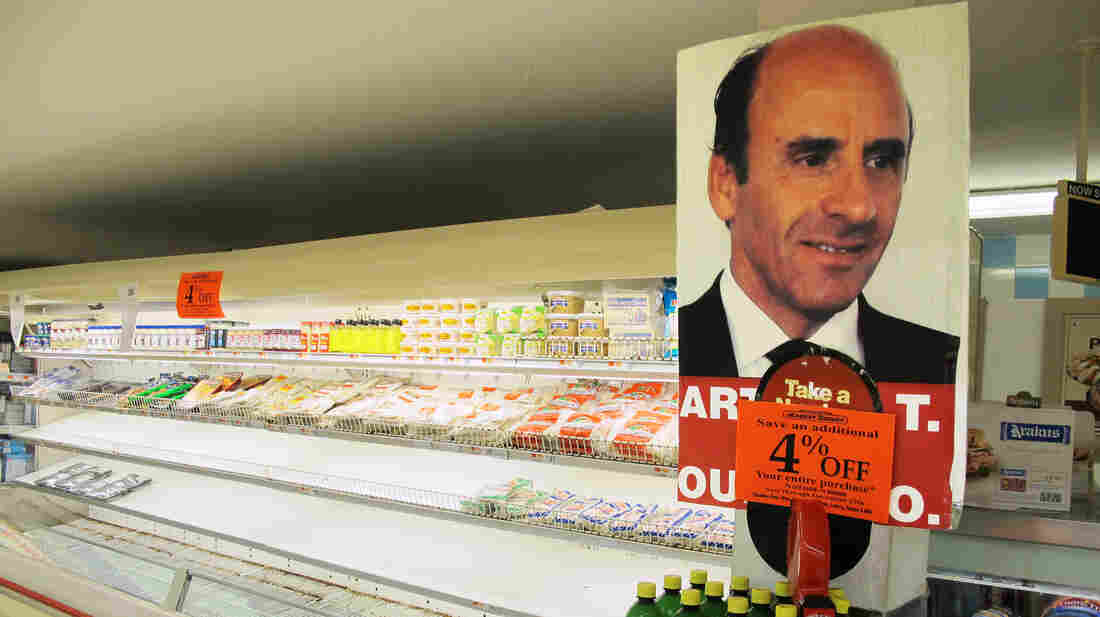 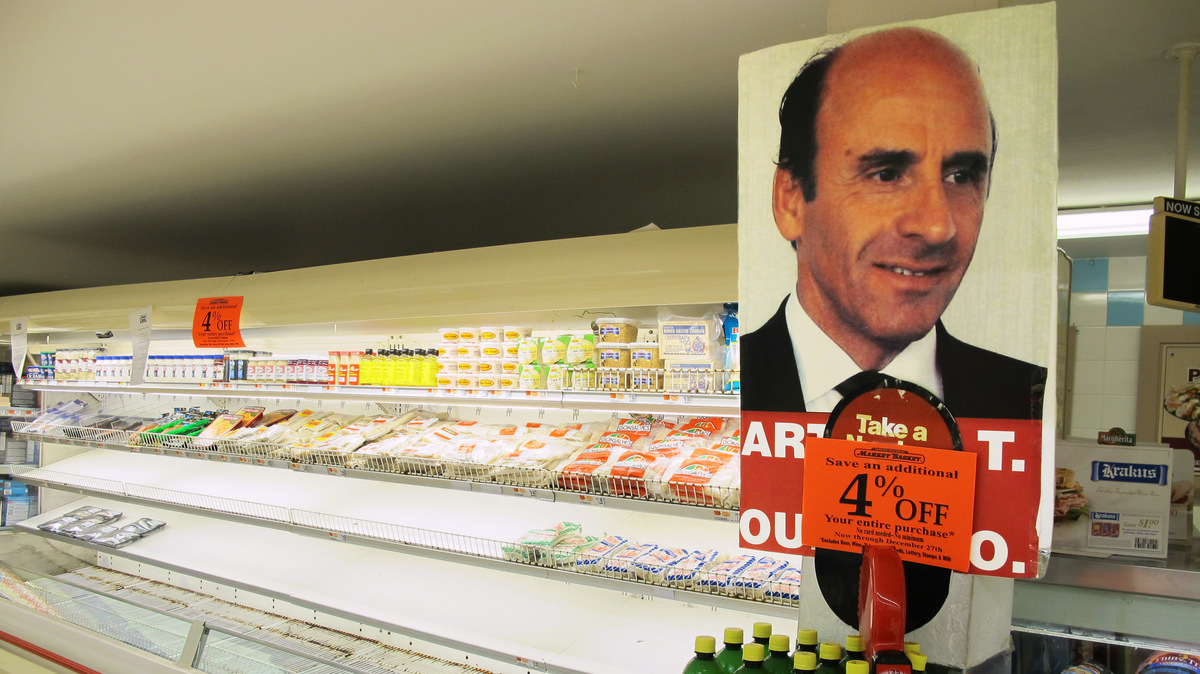 If your boss was fired, would you walk off the job in protest?

That's what's happening at the New England grocery store chain Market Basket, which has 25,000 employees. Business at Market Basket stores has slowed to a trickle as workers disrupt operations, stage protests and ask shoppers to stay away.

They say CEO Arthur T. Demoulas treats them well, and they want him reinstated.

"We're here to get support from all the customers and try and make sure no one comes in. We want Artie T. back," Pinto says.

He's referring to Arthur T., not his cousin and boardroom rival Arthur S. Demoulas. Their battle for control of the company has now spilled over into the 71 supermarkets.

Inside the Somerville store, only three checkout aisles are open. None of them has a line. The entire produce section is barren.

At the deli counter at the back of the store, Adelaide Leonardo is stocking the display case with cheese that may just end up spoiling. Fliers are taped to the glass. One says: "Boycott Market Basket." Another says: "Bring back A-T-D, our one true leader."

Leonardo agrees. "We know everybody. We know the customers," she says. "We are family here."

Yet family is the reason Market Basket is in a muddle. Cousins Arthur T. and Arthur S. are both grandsons of a Greek immigrant, also named Arthur Demoulas, who opened a small grocery in working-class Lowell, Mass., nearly a century ago. Two of his sons grew it into a regional supermarket chain. Their sons have been feuding for decades. An epic legal battle between the two in the 1990s featured a courtroom fistfight. Last month, Arthur S. gained control of the board and ousted Arthur T. That's when workers surprised themselves with their power to grind business to a standstill. 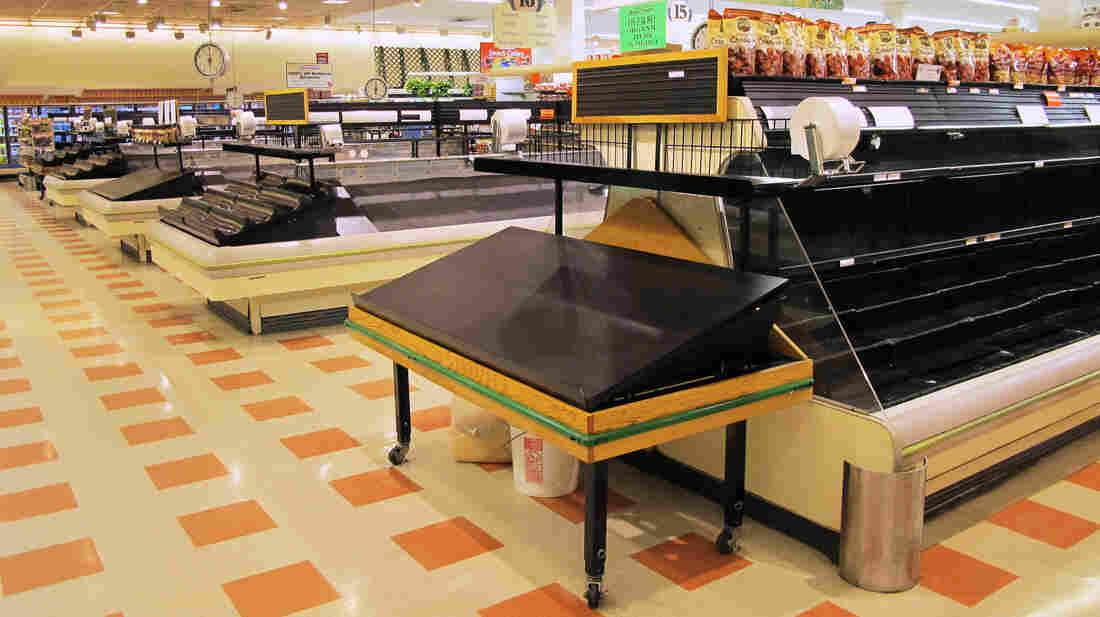 The aisles and food cases are largely empty inside a Market Basket in Somerville, Mass. Workers have disrupted operations by leaving produce to spoil in the back of the store and parking semitrucks to block loading bays. Curt Nickisch/WBUR hide caption 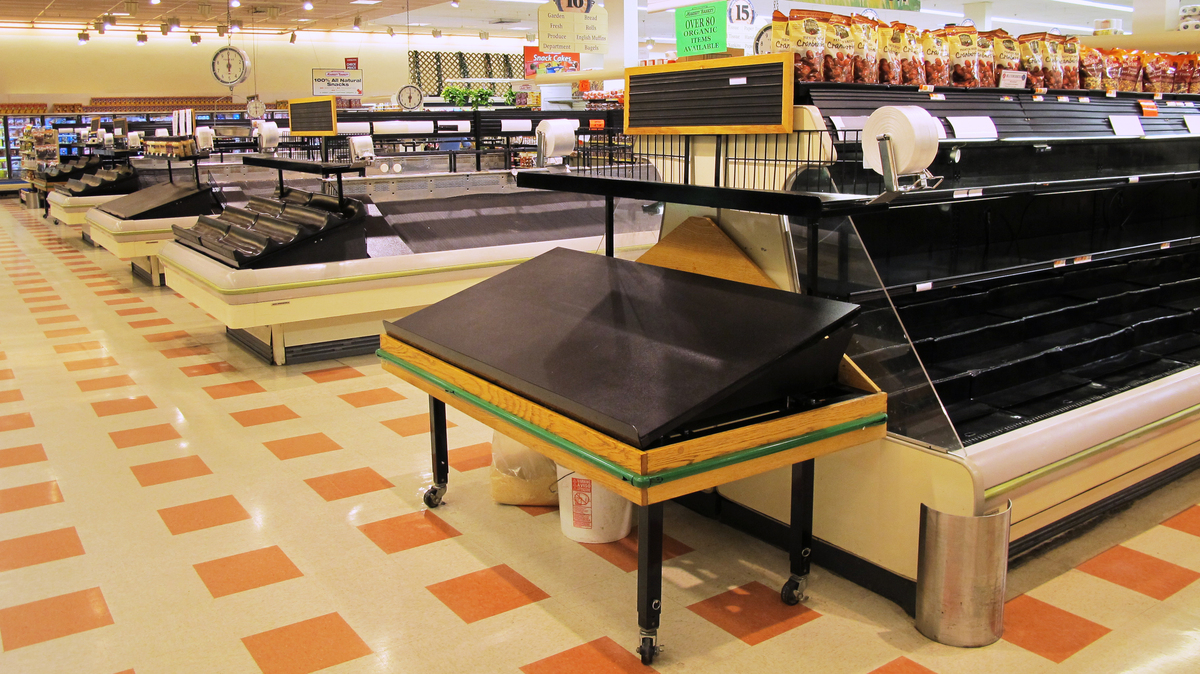 The aisles and food cases are largely empty inside a Market Basket in Somerville, Mass. Workers have disrupted operations by leaving produce to spoil in the back of the store and parking semitrucks to block loading bays.

"We're going to survive. We stay strong," says store manager Daniel Rivera, who's been at the company for 24 years. Rivera says workers are fiercely loyal to the ousted CEO for treating them well. Everyone gets quarterly bonuses. The pay is decent. Rivera says Arthur T. Demoulas often came through the stores, making it clear he cares more about people than money.

"Like I say, I work in different companies before, and I never have owners come in to me and say, 'How you doing today?' or 'How's your family?' It's great," Rivera says.

Those loyal workers have brought the company to its knees. Market Basket is losing an estimated $10 million per day.

John Davis, the head of the Families in Business program at Harvard Business School, says there's still time for the two Demoulas cousins to put aside their egos and save the company.

"Hopefully, there's enough love in this family, not for one another anymore but for the legacy of their fathers, that this family will do the right thing and re-create a stable ownership group," Davis says.

As the deadlock drags on into its second week, the board is discussing its options behind closed doors. Company executives says they want employees back at work by Monday, and have promised "they can return without fear of penalty."