Where Love's Concerned, This 'Magic Barrel' Is No Magic Bullet

Where Love's Concerned, This 'Magic Barrel' Is No Magic Bullet 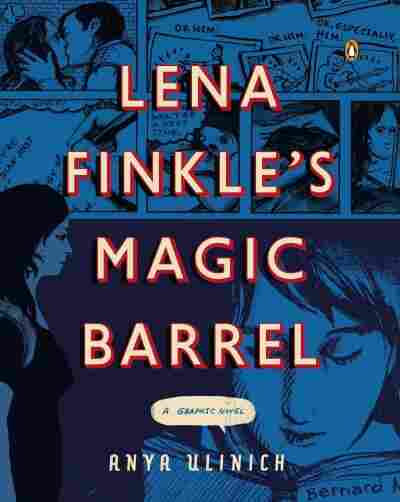 Lena Finkle is a 37-year-old, twice-divorced Russian immigrant and a self-described "toddler of relationship experience" — when a friend asks how many guys she's "been with" in her life, she can only hold up three fingers. Anya Ulinich's new graphic novel, Lena Finkle's Magic Barrel is her account, told in expressive dark-inked drawings and hand-printed all-caps dialogue, of her quest to find true love — and good sex — and resuscitate what she depicts as her freeze-dried heart.

Finkle's saga takes us from her girlhood apartment block in Soviet Moscow — where she's molested by a pervert in the elevator — to a scathing guided tour of the nutcases and illiterates she meets through the online dating site OkCupid, some of whom are creepily similar to the students she teaches in her New York writing workshops. She tells one lover who asks what she likes, "I'm 'kinky' the way a tangled garden hose is kinky ... obstructed." His response: "You're good with words."

Bernard Malamud's classic story "The Magic Barrel" provides a template for Ulinich's novel; it stars rabbinical student Leo Finkle, who hires a matchmaker to find him a wife.

Like her near-namesake, Lena is aghast that she's never loved anyone body and soul (except her two daughters). She married her first husband, a stoner she met at a Phoenix 7-Eleven, in exchange for immigration papers shortly after she and her parents flew to Arizona on tourist visas in 1991. She met her second husband not long afterward, in the library at Arizona State University. Her story begins shortly after she decides to end their hostile 15-year marriage and move into a two-bedroom apartment in Brooklyn, N.Y., with her daughters.

Malamud's matchmaker claims he's got a whole barrel of additional prospective brides if none of his initial offerings suit fickle Finkle. Lena's own magic barrel houses a similar overflow, a seemingly endless supply of available — if not actually suitable — men. Yet, as Ulinich makes clear, there is no magic barrel or bullet where love is concerned. Instead, there's "panicked grasping for some kind of meaning."

Ulinich pulled off a similar tragicomic mix with Petropolis, a coming-of-age novel about a Russian mail order bride's search for her long-lost father (not to be confused with Marjane Satrapi's autobiographical graphic novel, Persepolis, about growing up in Iran after the Islamic revolution).

But she throws a lot at us in the opening sections of Lena Finkle's Magic Barrel. The blocks of dialogue, commentary, thought bubbles, and arguments with a miniature Lena — who represents her skeptical conscience — all vie for our attention and occasionally induce eye-strain and brain-drain. Background information is conveyed in facsimiles of ring-bound notebooks bearing titles including "The USSR Eighties" and "The Brief Romantic History of Lena Finkle."

I nearly bailed when I hit the dizzying two-page graphic spread titled "Romantic Inevitability--->And the Student Body, Arizona State University, 1992," but I'm glad I hung in there for her ghoulishly funny dating saga. Who would want to miss the bucktoothed weirdo whose shelves are lined with empty prescription bottles, the veterinary technician whose bedside table holds the unclaimed, mummified remains of someone's pet bunny, and the Don Draper lookalike who shies at sex? To her friends' consternation, Lena readily jumps into bed with some pretty horrific prospects: "It was kind of thrilling to get so close to a stranger — to get inside his house, his body — so fast!"

The novel deepens when Lena spots a man reading Malamud on a bus. Ulinich captures this intriguing character, with his glass eye, "odd face ... like a child and an old man," and high-pitched, soft voice in beautiful, haunting close-ups and intense conversations. A seemingly penniless carpenter who sleeps on a mattress in the Chinatown tenement he's renovating, "the Orphan" turns out to be a wealthy heir who hates money. He has a history of getting women (including Lena) to open up to him — but then he leaves "while the sex is still really good." Lena not only ignores all the red flags but lets us know what's coming, with early allusions to her "year of unreasonable grief."

Don't expect even a wishful happy ending like Malamud's, filled with fantasies of "violins and lit candles" revolving in the sky. This absorbing, brio performance is about a woman with a Russian soul who doesn't sugarcoat anything.

"No one ever truly arrives!" Lena exclaims. In other words, this immigrant's quest for love and connection in her adoptive home will continue.