Accessibility links
As Labor Market Advances, Millions Are Stuck In Part-Time Jobs Payrolls have grown by more than 200,000 for six months in a row — the longest stretch since 1997. But 7.5 million people are working less than 40 hours per week even though they want full-time jobs. 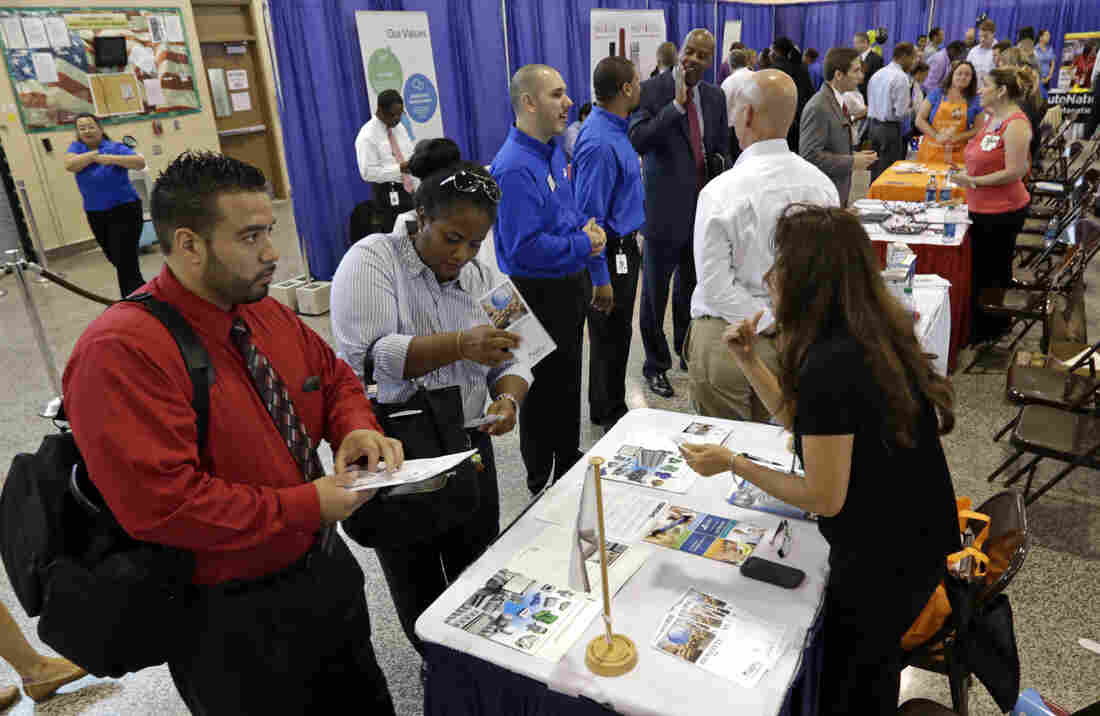 People attend a hiring fair for veterans in Fort Lauderdale, Fla., July 16. About 7.5 million people in the U.S. are working less than 40 hours per week even though they want full-time jobs. Alan Diaz/AP hide caption 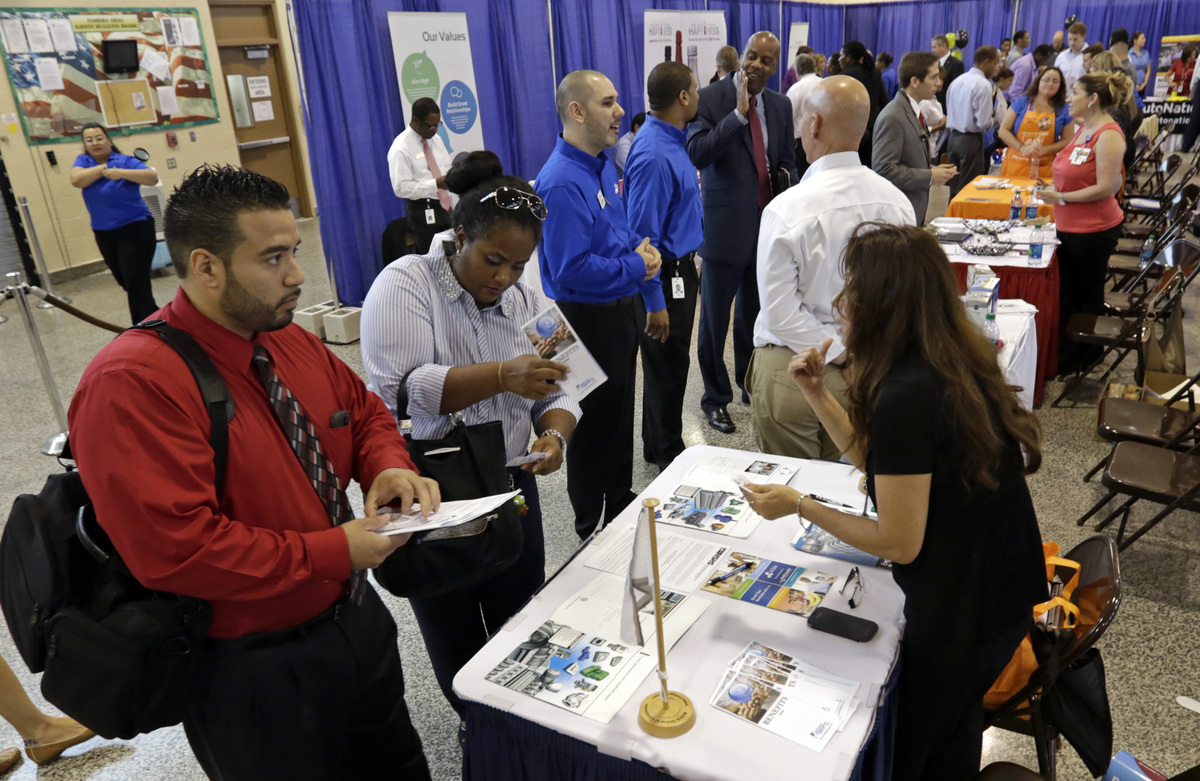 People attend a hiring fair for veterans in Fort Lauderdale, Fla., July 16. About 7.5 million people in the U.S. are working less than 40 hours per week even though they want full-time jobs.

Treading water in July is really fun — if you happen to be in a swimming pool.

But if you find yourself stuck in the part-time labor pool, drifting is disappointing.

On Friday, the Labor Department reported that while employers hired 209,000 workers in July, the growth rate was not strong enough to push part-timers forward.

The monthly jobs report showed payrolls grew by more than 200,000 for the sixth straight month, the longest stretch of such growth since 1997.

But the troubled part-time labor force remained roughly unchanged in July, with 7.5 million people still getting less than 40 hours of work per week, even though they are seeking full-time paychecks.

"Many Americans who would like full-time jobs are stuck in part-time positions, because businesses can hire desirable part-time workers to supplement a core of permanent, full-time employees, but at lower wages," Peter Morici, an economics professor at the University of Maryland, said in a written assessment.

With the pool of eager part-timers still so large, employers have been able to hold down wages. The Labor Department said that in July, average hourly earnings edged up by just one penny to $24.45. Over the past 12 months, hourly earnings have risen by 2 percent, just keeping pace with inflation.

The Labor Department characterized the unemployment rate in July as "little changed," with an uptick of one tenth of a point to 6.2 percent. The labor-force participation rate of 62.9 percent "has been essentially unchanged since April," the report said.

Businesses can hire desirable part-time workers to supplement a core of permanent, full-time employees, but at lower wages.

Peter Morici, economics professor at the University of Maryland

And the number of long-term unemployed, i.e., people who have been jobless for 27 weeks or more, was also "essentially unchanged at 3.2 million in July," it said.

In other words, the job market is moving along at a decent, steady pace. But the upswing is still not strong enough to change the prospects for the long-term unemployed or the involuntary part-timers, or to drive significant raises for workers.

"July's 209,000 jobs is solid, but is a decline from the strong second quarter, when 277,000 jobs were added each month on average," said Heidi Shierholz, an economist with the Economic Policy Institute. "At July's pace, it would take nearly four more years to get back to pre-recession labor market conditions."

The White House said the report confirms that the economic recovery has made huge progress, but has left behind millions of Americans.

"Short-term unemployment has fully recovered," Jason Furman, chairman of the president's Council of Economic Advisers, wrote in his assessment. However, "the long-term unemployment rate, which more than quadrupled as a result of the recession, still has the furthest to go to recover to its pre-recession average."

With so many long-term-unemployed workers in the hunt for jobs, part-time workers find themselves with little bargaining power in the workplace.

Their concerns about constantly changing shifts, on-call schedules and low wages have started getting more attention this summer, at least from Democratic lawmakers.

Last month, Rep. George Miller of California, the senior Democrat on the House Committee on Education and the Workforce, and Rep. Rosa DeLauro, D-Conn., introduced the Schedules That Work Act to reform rules for part-time workers.

For example, they want employers to guarantee workers four hours' pay any time they are called out to the job. Many workers, especially those at restaurants and retail shops, say their employers too often schedule them for only an hour or two during peak times, such as lunch hour.

Business groups generally are opposed, arguing that part-time workers will get better hours and conditions when the economy improves enough to boost all jobs and wages. They say that imposing new rules on businesses would only discourage hiring.