Accessibility links
Crushed Under Credit Card Debt: A Tale Of Survival Unexpected expenses and health issues sunk Claire Shrout and her family into frightening levels of debt. What she went through is familiar to a lot of Americans. 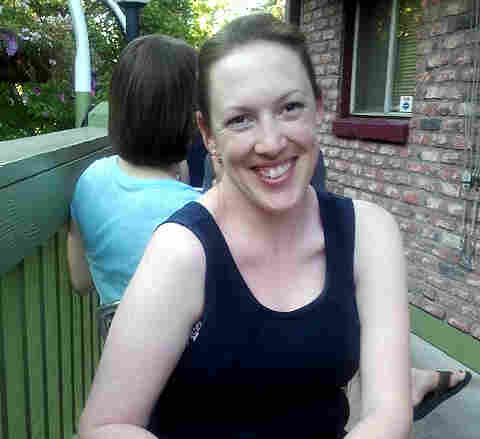 After two kids and her husband's bouts with cancer, Claire Shrout's family was wracked with debt. Instead of declaring bankruptcy, they worked themselves out of it and hope to be relatively debt free by spring. Courtesy of Claire Shrout hide caption

The difficulty would happen when unexpected expenses would arise ... your transmission fails or if your child needs to go to the emergency room. People with credit card debt don't have savings accounts. So, when something like this happens, what do you do? You get out another credit card.

Claire Shrout is a registered nurse, and the mother of two boys. What Shrout and her husband went through is familiar to a lot of Americans.

"The difficulty would happen when unexpected expenses would surprise," Shrout tells NPR's Arun Rath. "Your transmission fails, or if your child needs to go to the emergency room, you know, there's some big unexpected expense. People with credit card debt don't have savings accounts. So when something like this happens, what do you do? You get out another credit card."

"When you have two little sons and you're thinking about the college accounts that you want to establish for them, that's when ... you realize there's nothing coming along to bail you out."

Emotionally, Shrout says there is a tremendous amount of shame associated with having credit card debt, and it's frightening when medical bills pile on top of that.

A huge part of living with debt, Shrout says, is the guilt and shame over purchases that might seem like an indulgence — like nice clothes for work or a weekend away — that can really be essential.

"The whole thing gets very murky," she says.

Shrout says it is fortunate that she and her husband have a strong relationship and have had a few good years of being healthy and working in order to make some progress.

"We had a lot of faith that things would get better," she says. "We've made tremendous progress with our credit card debt, and that's been a personal achievement every month. Something he and I feel really good about."

Shrout says they briefly considered filing for bankruptcy, but ultimately decided it wasn't the right choice. She says they felt they understood where their hardships came from and that they had gotten themselves into this debt, so they could also get out.

"And it feels better to be paying this off with our own hard work and not just because it all just got wiped away," she says.

They began to climb out of debt in 2010, by working steady, putting a large chunk of money toward that debt each month and keeping their lifestyle relatively modest, such as buying some bicycles instead of having a second car.

"We've been able to cut our debt by two-thirds, and we're going to continue," she says. "We're hoping to be debt free, besides our mortgage, by this spring ... and it's awesome."