Accessibility links
Bra History: How A War Shortage Reshaped Modern Shapewear A World War I metal shortage helped undo the long reign of the corset, freeing both wartime steel for battleships and women for factory work. 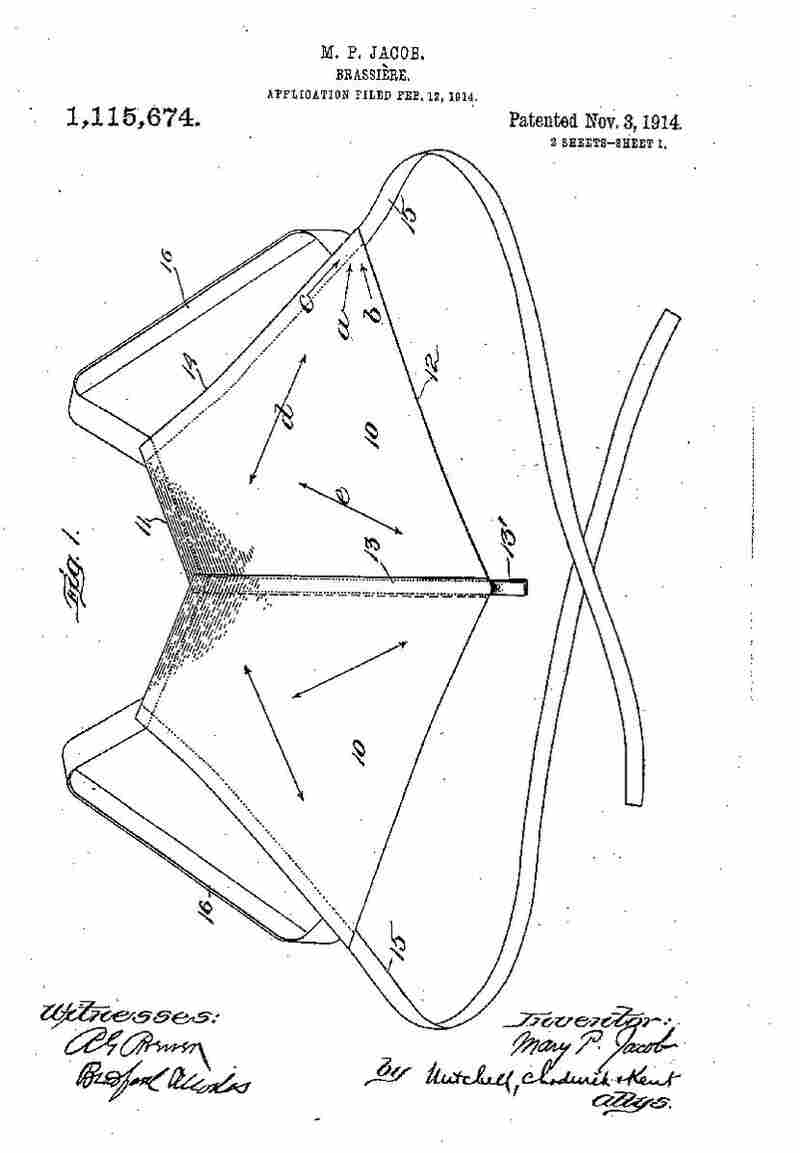 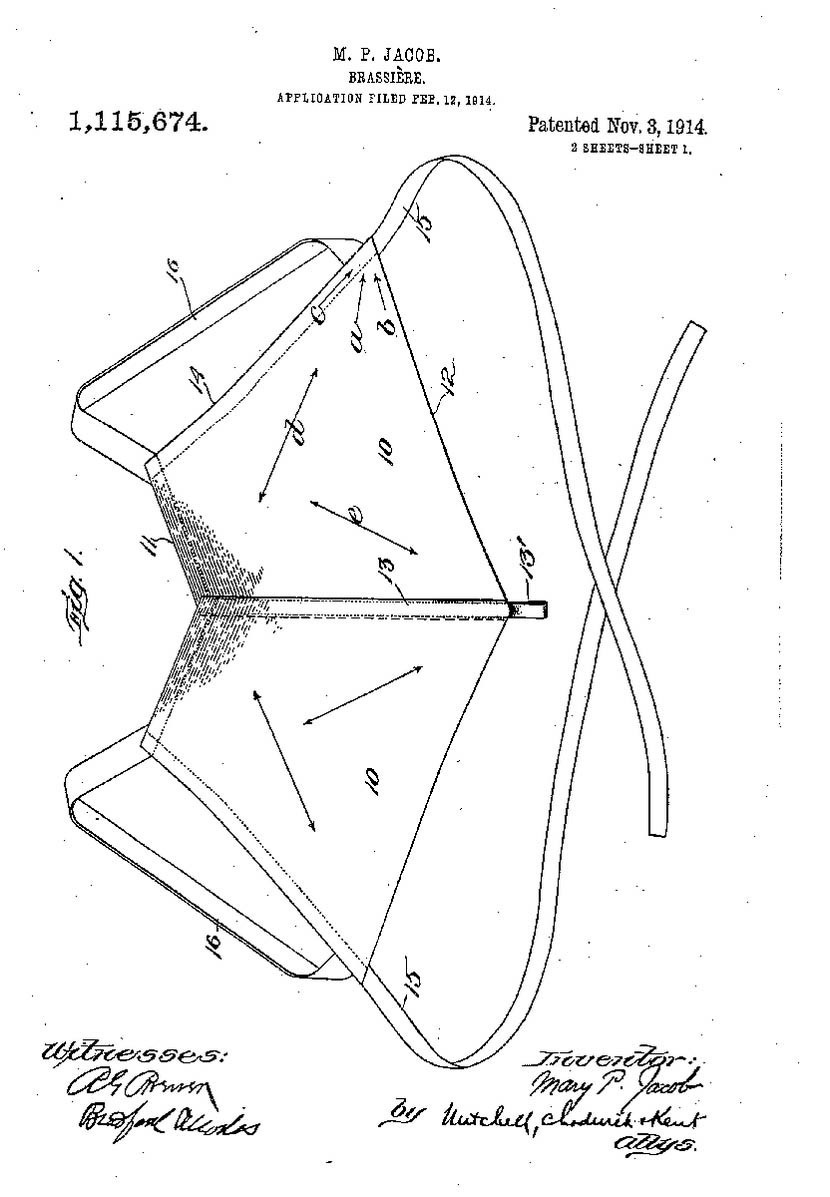 Illustration from Caresse Crosby's patent application for a "backless brassiere." Born Mary Phelps Jacob, Crosby changed her name after she sold her bra business to the Warner Brothers Corset Co.

Women today breathe a little easier — thanks to a World War I metal shortage.

Before then, women squeezed themselves into corsets that molded their figures to fit the Victorian ideal: a voluptuous bosom atop a teensy waist. But since corset frames were mostly made of metal, which was needed for ammunition and other military supplies, the U.S. War Industries Board asked American women in 1917 to stop buying them. Around the same time, the modern-day bra emerged, freeing up wartime steel and women alike.

The first-ever bra most likely dates back to ancient Greece, when women wrapped a band of wool or linen across their breasts, pinning or tying them in the back. Corsets didn't show up until around 1500 and quickly became mandatory for middle- and upper-class women in Western society. Just as quickly, physicians started blaming corsets for ailments ranging from fainting spells to muscle atrophy, while feminists attacked them for restricting women, both physically and symbolically.

Caresse Crosby patented the first modern bra in the U.S. in 1914. While primping for a debutante ball, she donned a stiff corset and tight corset cover beneath her sheer evening gown. But the corset cover — which she described as "a boxlike armour of whalebone and pink cordage" — poked through her gown. "Bring me two of my pocket handkerchiefs and some pink ribbon," she told her maid, who helped her sew the materials into a simple brassiere.

Bring me two of my pocket handkerchiefs and some pink ribbon.

Crosby's invention was the talk of the party; other girls crowded around, asking how she danced so freely. When she unveiled her creation, they immediately asked her to sew bras for them, too. When strangers offered a dollar for one of her bras, she decided to start a business and patented her "backless brassiere." She managed to attract a few orders from department stores, but her startup fizzled. At her husband's insistence, Crosby sold her patent to the Warner Brothers Corset Co. in Connecticut for $1,500.

Back to the War Industries Board's corset ban, which freed women to work at physically demanding factory jobs — and 28,000 pounds of steel, enough to build two battleships. By the time the war ended in 1918, corsets were fading fast, and following World War II and another severe metal shortage, American busts were free at last.

Except for bras, that is, which quickly replaced the corset. At first, they were one size fits all, fashioned from stretchable material. Some historians credit William and Ida Rosenthal, founders of Maidenform, with introducing the A-, B-, C- and D-cup system in the late 1920s or early '30s, while others claim it was S.H. Camp and Co. Regardless of who slapped letters on women's chests, the system caught on with other bra manufacturers.

As fashions evolved, so too did the humble bra. When the androgynous flapper look came into vogue in the Roaring '20s, so-called bandeau bras — which flattened the breasts — became the popular choice. In the 1930s, the bra industry took off, thanks to the adjustable elastic strap, padded cups and other innovations.

Frederick Mellinger, founder of Frederick's of Hollywood, was the genius behind the front hook bra and the "Rising Star" — today's push-up bra. Nearly three decades later, childhood friends Lisa Lindahl, Hinda Miller and costume designer Polly Smith created the Jogbra, the first sports bra that was originally made out of two jockstraps.

Today, nearly 95 percent of women in Western countries wear bras, which translates to a billion-dollar industry dominated by Victoria's Secret and corporations like Hanes. Designers are now challenged to satisfy the demand for minimal bras that accommodate plunging necklines and increasing bust sizes. (In the past decade, the most common size in the U.K. jumped from 34B to 36C.)

Is the bra destined to meet the same fate as the corset? Danish fashion historian Rudolf Kristian Albert Broby-Johansen certainly thinks so. He predicted the bra's demise as far back as 1969 in his article "Obituary for the Bra." And then there's the recent #FreeTheNipple movement, committed to fighting the stigma against human nipples that's credited with helping launch the TaTa Top, a nude-colored bikini top painted with two nipples.

Perhaps the over-the-shoulder boulder-holder may soon be ... just plain over.

This story originally misstated the weight of the steel saved by the corset ban and made an incorrect comparison to the weight of World War I-era battleships. The correct amount was 28,000 tons.