Accessibility links
'The Kills' Sustains Suspense Across A Massive Structure Richard House's 1,048-page thriller is a series of interlocking novels within novels about a British contractor who flees Iraq after being framed for the loss of $53 million in development money.

'The Kills' Sustains Suspense Across A Massive Structure

'The Kills' Sustains Suspense Across A Massive Structure 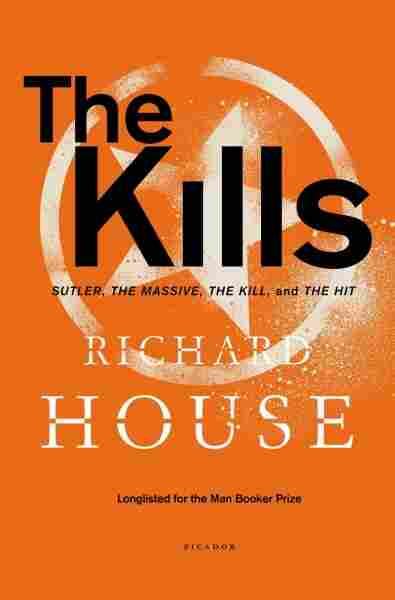 Sutler, the Massive, the Kill, and the Hit

Title
The Kills
Subtitle
Sutler, the Massive, the Kill, and the Hit
Author
Richard House

Richard House's thriller The Kills, which was longlisted for the Man Booker Prize last year, weighs in at 1,024 pages. It's a long read, and worth every minute.

House begins with a ferocious image — a Mason jar of dead scorpions, delivered to a British contractor in Iraq. He sees movement in the jar; the ginger scorpions have revived. "With a certain horror he raised the glass to the light and noticed how the smaller scorpions struggled to burrow and hide under the larger bodies, and this seemed strange to him, how something naturally armored would see the security of cover."

John Jacob Ford — using the alias Stephen Sutler at his new employer's request — works for HOSCO International, a civilian company providing food, weapons and shelter to the military. Their contract also calls for the destruction of all chemical, human and animal waste in five burn pits in the desert. Sutler's just been given an abrupt exit order by his bosses: "Listen. There's a problem and it can't be solved. You need to disappear."

Soon he's the target of a global manhunt, blamed for siphoning off $53 million in funds targeted for a massive desert reconstruction project that was never started. With vivid detail and a steady uptick of suspense, House tracks Sutler from the Iraq desert to Turkey to a village in the French Alps, at which point he disappears into a blizzard, presumed dead.

"Sutler," which describes the collateral damage from a high-level corporate financial cover-up, is the first of four interlocking novels in The Kills. House constructs his novel carefully, setting up mirror images, doppelgangers and echoes (even that jar of scorpions reappears). Characters in the first book are reading the third book, "The Kill," a thriller about a grisly murder in Naples in which two brothers pick up a guy from the train station, and cut him to pieces in a basement room.

That crime is being filmed in the second book, "The Massive," which also gives the full backstory of the fictional Camp Liberty (not the real American installation in Baghdad), where Sutler worked. House gives humanizing details about each of the seven American civilians hired to man the burn pits, and the false promises used to lure them to that toxic and ultimately fatal job. In the fourth and final book, "The Hit," set mostly in Cyprus, Sutler is still on the run. By now there have been sightings of three Sutlers reported in the press, and at least one diplomat is convinced Sutler doesn't even exist.

House's brilliant structure allows him to maintain maximum suspense while following his characters and ideas across a vast moral, political and philosophical landscape. (The effect is not unlike Roberto Bolaño's in 2666, an inspiration for The Kills.) The novel is ambitious, expansive, beautifully written and gripping, with intimations of danger shimmering behind even the simplest gesture. Imagine Philippe Petit walking a tightrope across the Grand Canyon. The Kills is that dazzling.