Accessibility links
Critics Blame Airbnb For San Francisco's Housing Problems Some have found that renting on a nightly basis brings a lot more money than long-term leases, but people concerned about a shrinking rental market have turned to legal action and protests. 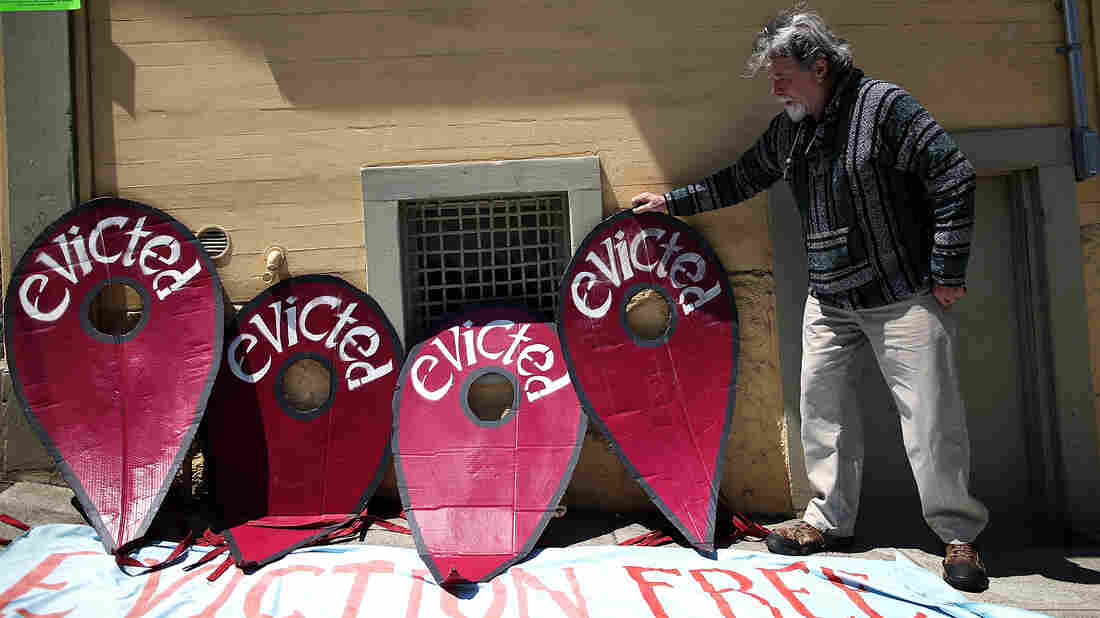 Demonstrators in San Francisco have been protesting outside apartment buildings that have units rented through online brokers. Justin Sullivan/Getty Images hide caption 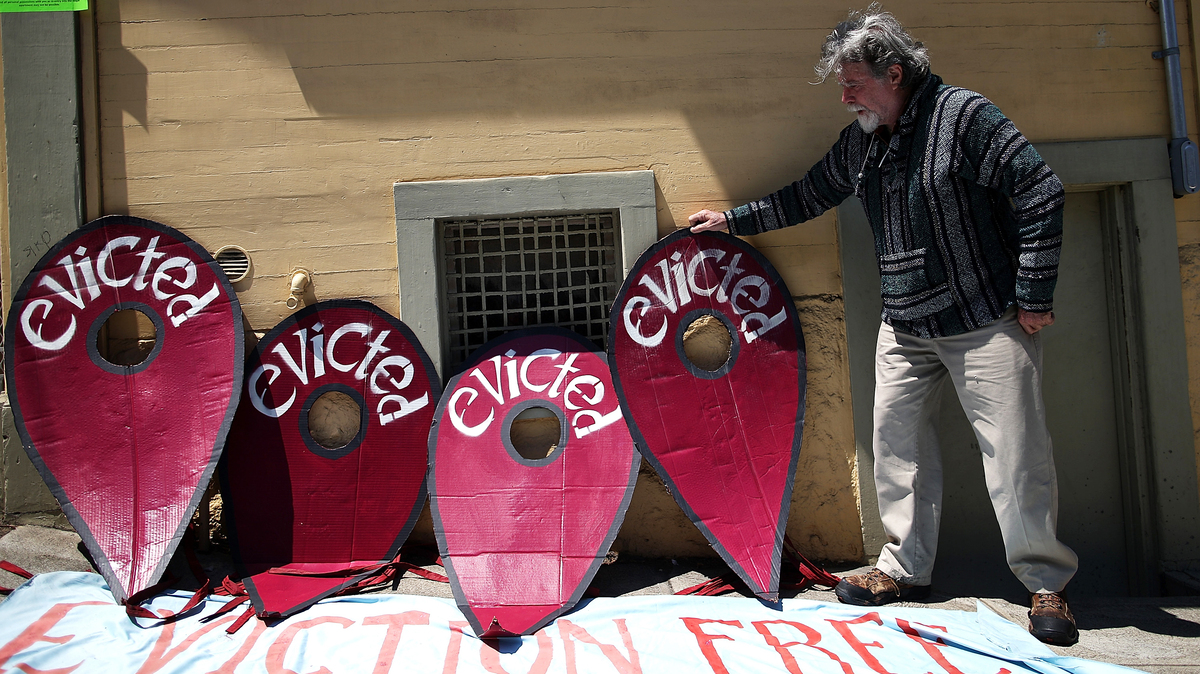 Demonstrators in San Francisco have been protesting outside apartment buildings that have units rented through online brokers.

Online rental brokers like Airbnb, VRBO and Flipkey in San Francisco may be finding some success renting to visitors on a nightly basis, but people concerned about a shrinking rental market have turned to legal action and protests.

In the city's North Beach neighborhood, for example, protesters recently gathered around a three-unit apartment with flats an online broker rents to vacationers. This used to be the rent-controlled home of elderly tenants until out-of-town investors bought the building and evicted the residents.

Ted Gullicksen of the San Francisco Tenants Union says those units were added to the 7,500 or so available to tourists in San Francisco using sites like Airbnb and VRBO.

"The underlying problem in San Francisco is the conversion of rent-controlled apartments to other uses, be they condo or tourist, which is taking sorely needed rent-controlled units off the market," Gullicksen says.

The city's nearly 3 percent vacancy rate is already one of the lowest in the nation. It's also got some of the most expensive median rents at nearly $3,300 per month. Local law limits rent increases for long-term residents; but if tenants are evicted, like they were here, they'll probably have to pay market rate to stay in the city.

Airbnb To Start Charging Hotel Taxes In A Handful Of Cities

Can The Peer Economy Deliver Profits?

But Peter Kwan, head of Home Sharers of San Francisco, urges critics not to blame all those renting to short-term visitors for the housing crisis.

"I applaud the tenants union for bringing attention to the bad actors, but they may be giving the impression that everybody who hosts are equally bad actors, which is simply not the case," Kwan says.

Kwan's organization has over 1,000 members, and a lot are like him: They don't evict tenants. They live in the property they rent to tourists. Kwan gets about $130 a night for a room in his house — and it's booked pretty solid in the summer.

"During the summer it would be more than 20 days a month," he says.

So is the room he rents out legal in San Francisco? "It could be a violation of the zoning code. I haven't looked into it," he says. He says he may do that.

There are at least two codes and ordinances that make private rentals of less than 30 days illegal in San Francisco, and two lawsuits have been filed so far. The law's the same in New York City, which has been cracking down on rental scofflaws.

San Francisco Planning Director John Rahaim says his city is trying to walk a fine line. It wants to protect vulnerable tenants "in a way that isn't causing heartache to people who are just trying to make a little bit of money in their apartment or house," he says.

Next month, the city's Board of Supervisors is expected to consider a compromise measure that would legalize tourist rentals, but only under some conditions.

Carl Shepherd, co-founder of HomeAway, which runs many vacation rental websites such as VRBO, is pro-regulation. But he says too much could just send the hot market underground.

"So it's a little like Prohibition in the '30s, and what you don't want to do is create a law that can't be enforced because that does no one any good," Shepherd says.

Other cities around the world have made definitive choices. Amsterdam and Paris recently passed laws allowing short-term residential rentals. Berlin and Barcelona both banned them. The short-term-rental arm of the so-called sharing economy will have to adjust one way or the other as regulations slowly catch up with the supply, the demand and the technology that connects the two.