Accessibility links
James Brown's Daughter Recalls A Painful Childhood in 'Cold Sweat' Reviewer Richard Torres calls Yamma Brown's new memoir of her father a valuable, warts-and-all portrait of a troubled icon — and the way the cycle of abuse can turn through famous families. 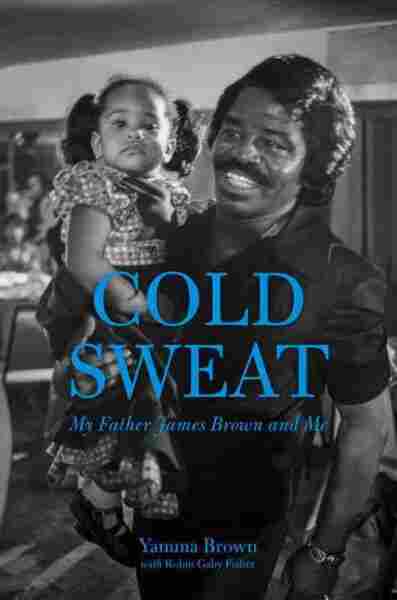 My Father James Brown and Me

Celebrity child autobiographies fall into two categories. There's the scorched earth approach: One sordid story after another — call it the "Mommie Dearest" syndrome.

The second category is the warts-and-all approach, in which the performer's progeny relates parental faults in oft-painful detail, but with the ultimate goal of deeper understanding. In many ways, the warts-and-all way is more challenging, because it requires the author to explain why — despite the horrors — they still loved Mom or Dad.

And that's exactly what Yamma Brown does with Cold Sweat: My Father James Brown and Me. Co-written with Robin Gaby Fisher, Cold Sweat is surprisingly bereft of backstage histrionics and — with the exceptions of Michael Jackson and Denzel Washington — celebrity anecdotes. Instead, Brown takes the reader into the home she shared with the "Hardest Working Man in Show Business" in Beech Island, S.C. The result is the most intimate and unflinching portrait of James Brown yet.

Cold Sweat begins on Christmas Eve 2006, when James Brown is in an Atlanta hospital with pneumonia. Yamma Brown, now married and a mother of two, wants to visit — but her father declines; he's not looking his best. "He never wanted people seeing him — not even his own kids — when his hair wasn't perfectly rolled and coiffed into his famous bouffant style," Brown writes. "I'd wanted to respect his wishes." But later that evening, she receives a phone call from Charles Bobbitt, her dad's personal manager: He's gone. Rushing to the hospital, she sits next to his body, overcome with a myriad of emotions and memories.

She recalls her father's sweetness toward her and her older sister Deanna, as well as his egotism. (He once got upset when he found his daughters listening to a Natalie Cole record instead of one of his.) And then she remembers his violent side. "Until I was grown, every time I heard him raise his voice, even when he was talking business on the phone, I shook with fear," Brown writes. "I had heard that rage so many times as a child, and it usually meant he was high and pummeling Mom behind closed doors."

That abuse and its long-lasting ramifications for Yamma is what gives Cold Sweat its emotional resonance. Brown writes about her feelings with an uncommon honesty: "As much as I loved my father, and I sure loved him, I hated him during those times. And I didn't like my mother much either." Her reasoning? "If she couldn't stand up for herself, how would she protect me?"

The turning point comes when 5-year-old Yamma witnesses her father beating her mother, Dee Dee, out in front of the house. She leaps on her dad's back, screaming at him to stop. Embarrassed, he does, and eventually her mother leaves, relocating to Maryland with her daughters — but for Yamma, the damage has already been done. "I'd been programmed to accept abuse as part of life," she writes.

Still, young Yamma vows she'll never let that happen to her. "It probably would have helped," she writes ruefully, "if someone had warned me that children who live with abuse often become abusers or victims themselves." Grown up and desperate to escape an abusive marriage, she calls her father and tells him about it. His response stuns her: " 'Yamma,' he said. 'I love you both. Marriage is hard. Everyone has problems. Disagreements. You're no different than anyone else. Try to work it out. Don't call me again until you do.' "

Cold Sweat is courageous in its depiction of the way abuse afflicts famous families. There is no sadder moment in the book than Yamma's description of her father trying to woo her mother back: Dee Dee bluntly informs him that it was the beatings that drove her away. He insists she should have stayed. "I would have learned my lesson eventually," he says. "I would have grown out of it." But James Brown wouldn't have. History shows he never did. Ultimately, Cold Sweat celebrates a survivor who found the courage to walk away — and paints a valuable, warts-and-all portrait of a troubled icon.

Richard Torres is the author of the novel Freddie's Dead. He has written for XXL, The New Yorker, Rolling Stone, The Village Voice and The New York Times, and has also penned album liner notes for a number of artists including Marvin Gaye, Richard Pryor and Dave Brubeck.