Accessibility links
In Acting And In Life, Lauren Bacall 'Loved The Idea Of Adventure' Lauren Bacall died Tuesday in New York at the age of 89. In 1994, she talked with Fresh Air about her early career, working with Marilyn Monroe and her intense love affair with Humphrey Bogart. 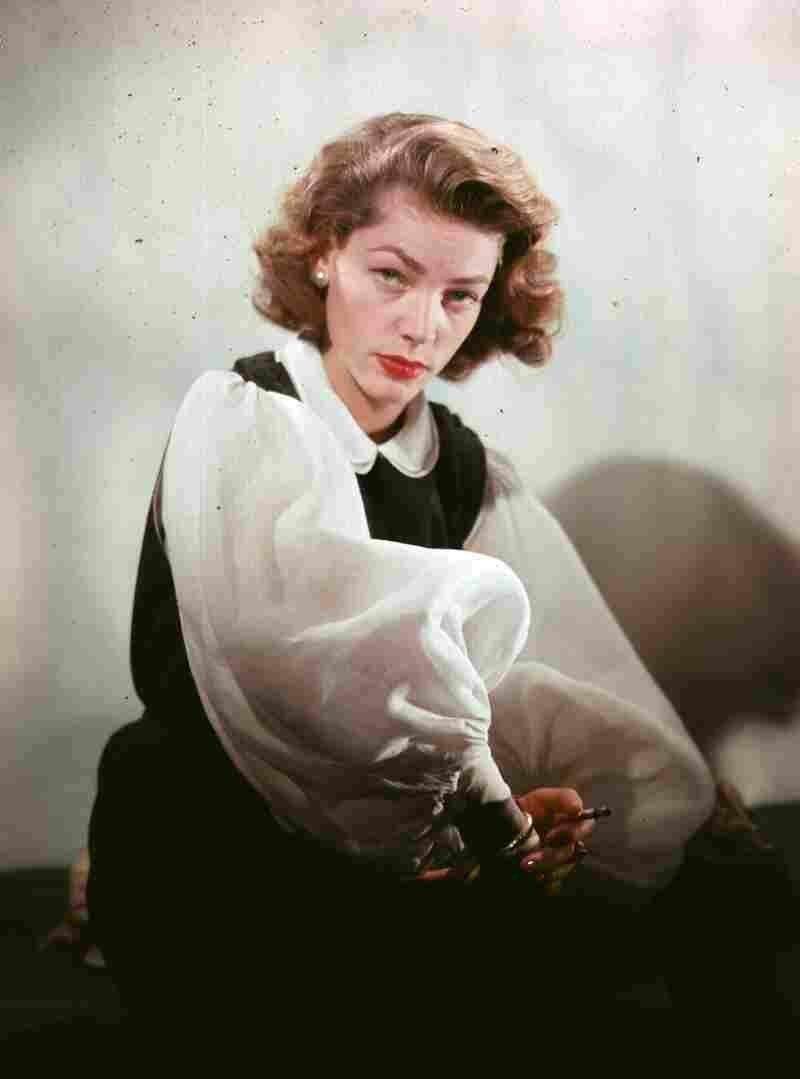 Lauren Bacall says she never set out to have a look. "It was just a way to keep my head steady," she insists. Baron/Getty Images hide caption

With her chin down and her eyes up, Lauren Bacall's trademark, sultry look enchanted audiences — and also fellow co-stars, most notably her future husband, Humphrey Bogart. But that powerful glance was actually a technique that 19-year-old Bacall employed to keep herself from shaking with nervousness during the filming of To Have and Have Not.

"It was quite a terrifying experience for me," Bacall told Fresh Air's Terry Gross in 1994. "I was this kid and I was scared to death of all these pros around me. ... My head would shake and my hands would shake, and I discovered if I kept my head down and looked up, my head would not shake, so I started to do that when I could, when it was appropriate in a scene."

She never intended to have a "look," Bacall insisted. "It was just a way to keep my head steady."

Bacall died Tuesday in New York. She was 89.

Though she made more than 40 films, and won Tony Awards in the '70s and '80s, she was forever associated with Bogart. When their affair began on the set of To Have and Have Not, he was more than twice her age. They married a few months later. She was 32 when he died of cancer in 1957.

Before Bogart's death, they made several more films together, including The Big Sleep, Dark Passage and Key Largo, and joined other actors in forming a committee to resist the anti-Communist investigations of the House Un-American Activities Committee.

After Bogart's death, Bacall had a brief engagement to Frank Sinatra and an eight-year marriage to Jason Robards. She also starred in the films Young Man with a Horn, How To Marry a Millionaire, Blood Alley, Written on the Wind, Designing Woman, Murder on the Orient Express, The Shootist and Misery.

She won Tony Awards for her performances in Applause and Woman of the Year.

We'll listen back to excerpts of Bacall's 1994 Fresh Air interview. 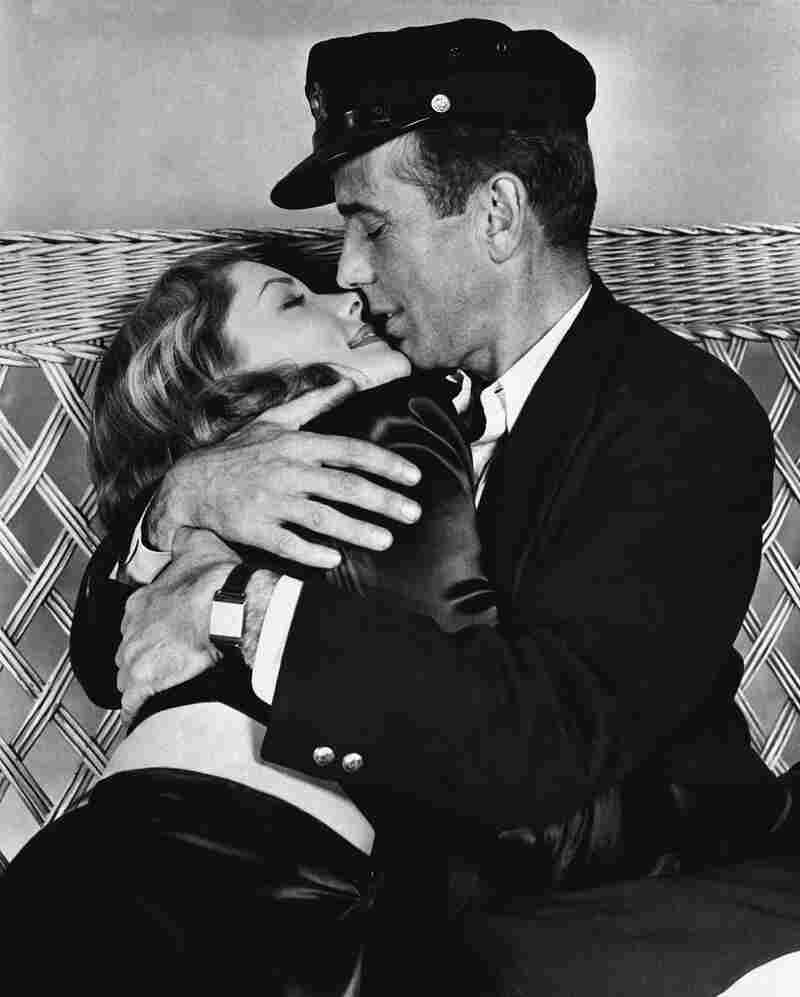 Lauren Bacall and Humphrey Bogart met on the set of the 1944 film To Have and Have Not. AP hide caption 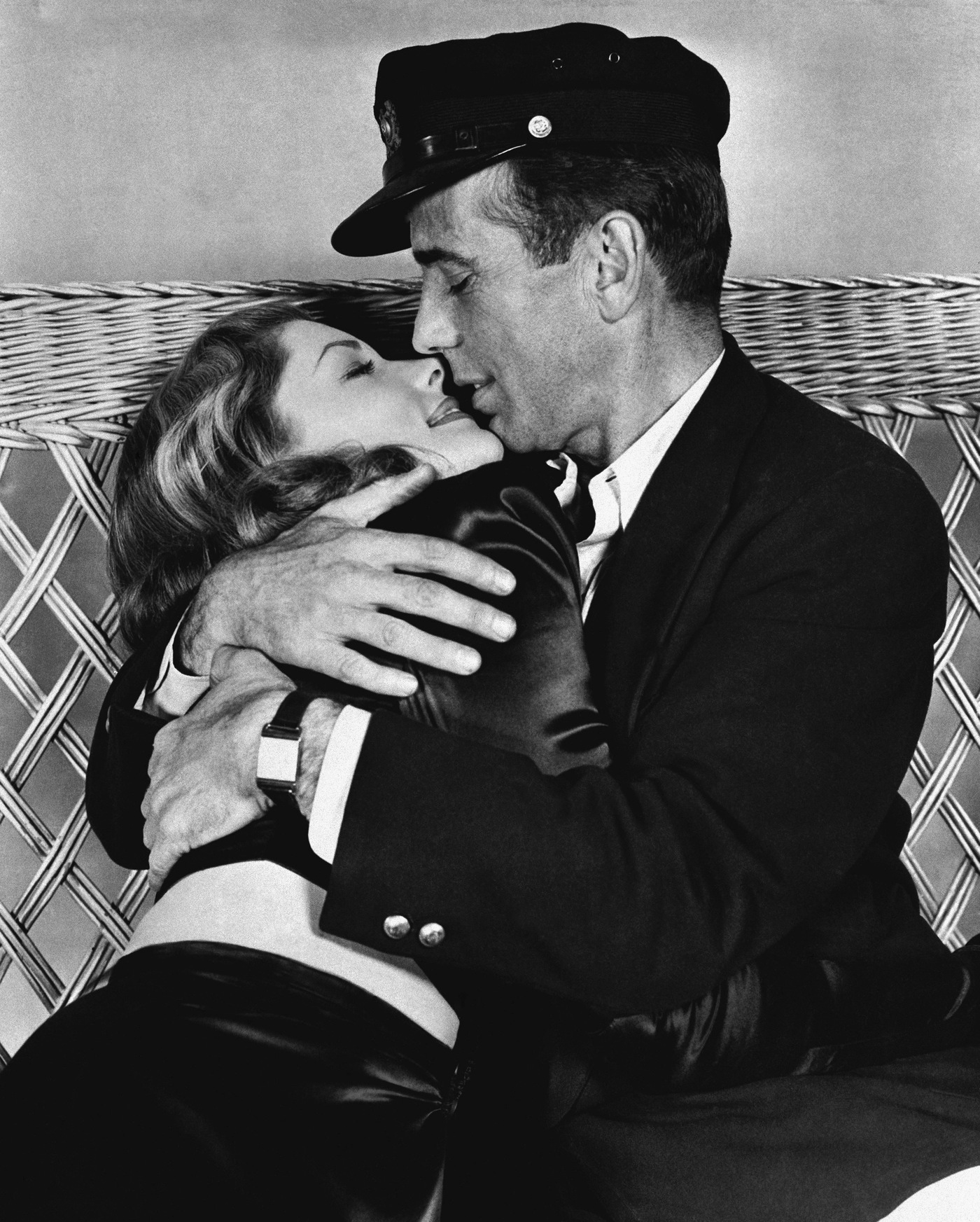 Lauren Bacall and Humphrey Bogart met on the set of the 1944 film To Have and Have Not.

When you were playing a part like that, you begin to think, "God, what a great life!" Independent, living alone, how dramatic! I was so stage-struck and starstruck and everything-struck that I loved the idea of adventure, and the drama of everything was so appealing to me. That was the fun of acting to me — that I could lose myself in all of that stuff.

That ideal was a woman who could give as good as she got, who had humor, who was kind of a woman of the world and somewhat insolent and actually who behaved rather like a man ... that if a man said something to you, you would look at him directly. And [Hawks] didn't like shy wallflower types — always with humor, though, and always somewhat suggestive that something was in the offing, that something could happen. You weren't quite sure what that something was, but you knew that it would be fun and fascinating, and probably different, unusual. He had this incredible thing going on in his brain, because it worked because I was insolent and he always said he wanted someone as insolent as Bogart.

On her relationship with Humphrey Bogart

The early romance was the most romantic experience I have ever had in my life — far surpassing anything I might've dreamed of or imagined, it was quite amazing. When you are young and it's your first love and you are just carried away by it and that's all you can think about — you see, Bogie was the kind of man who believed in taking care of marriage, in taking care of a relationship. He believed you had to work at it and keep it fresh and fun and interesting, and he did. 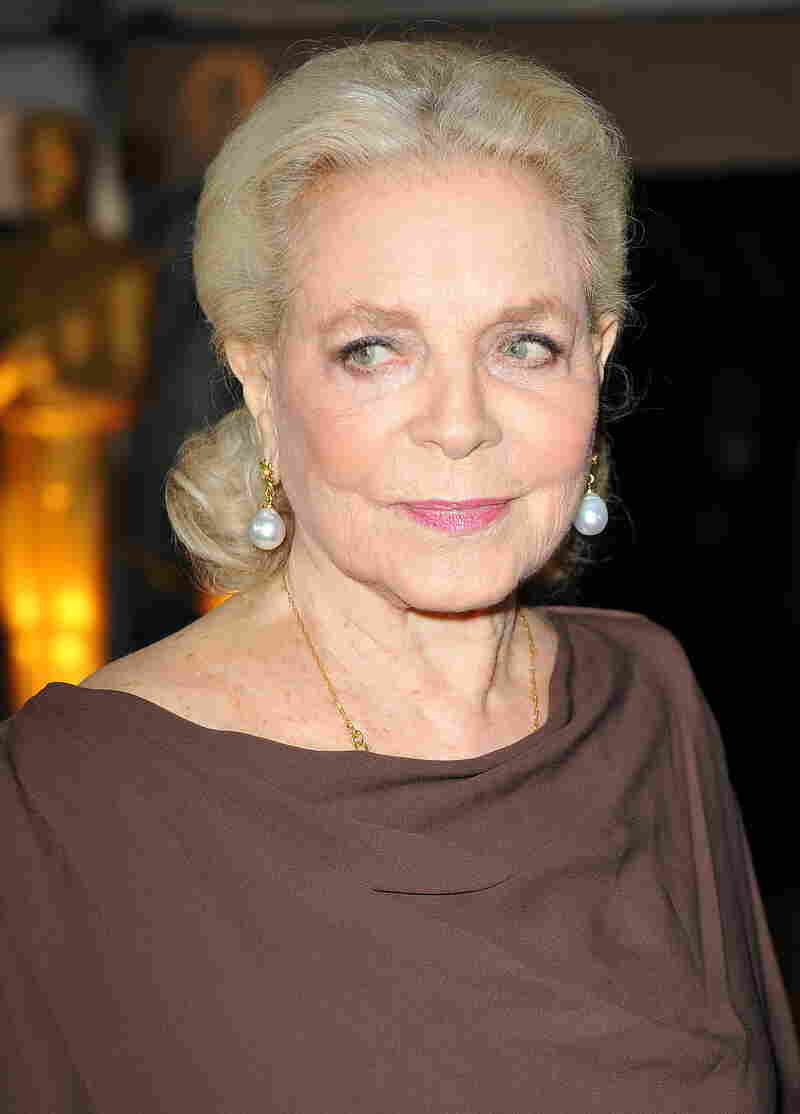 Bacall, pictured in 2009, had a deep, sultry voice that made her an instant star in the '40s. "I think it's one of the reasons that the perception of me has been that I'm so in control and so strong, so tough, because I have this deep voice," she said. Robyn Beck/AFP/Getty Images hide caption 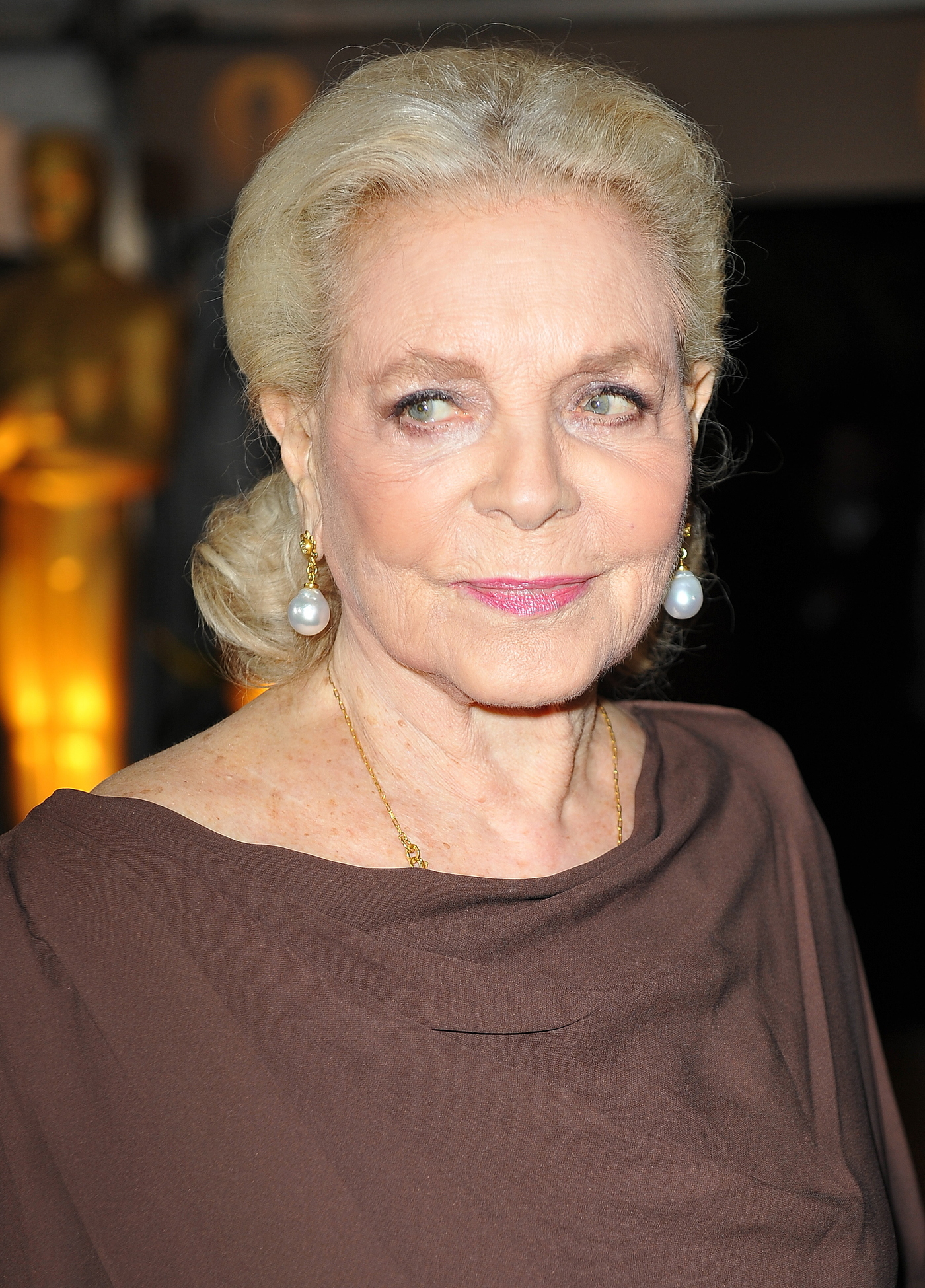 Bacall, pictured in 2009, had a deep, sultry voice that made her an instant star in the '40s. "I think it's one of the reasons that the perception of me has been that I'm so in control and so strong, so tough, because I have this deep voice," she said.

On working with Marilyn Monroe

We got along very well. My only complaint about her was that she was late all the time, but she was late out of fear as much as anything else, but it was hard to sit around and wait. She was usually an hour or two late every morning. ...

We were [very different types]. I wish I had been as photogenic as she was, but she was very sweet, kind of far away, very self-involved, but no meanness. She was not bitchy, she was not strident in any way, she just always seemed a little lost to me — wistful, kind of, just kind of not quite there.

On the drama of smoking on and off screen

If there was a pause in a conversation with anyone, you could always light a cigarette, or if a man lit a cigarette for you, you could look up. It's the most dramatic thing in the world because it's intimate, it's suggestive, and that's one of the problems with giving it up, is that it's a very useful tool.

On how having a deep voice affected her life and career

It always has been deep. I always had a low voice — my mother had one and my daughter has one. ...

I don't think I ever thought about it, you see. In actual fact, I've never been one, even from childhood, to kind of analyze myself very much. I just don't try to figure it all out to any degree, and my voice has been somewhat of a drawback now, because over the years, because there are people ... when I pick up the phone they say, "Yes, sir," you know? ...

Also, I think it's one of the reasons that the perception of me has been that I'm so in control and so strong, so tough, because I have this deep voice. I don't want to change it — and I can't change it.

Lauren Bacall And The 'Sex? What Sex?' Kind Of Movie Sex