Accessibility links
Mo'ne Davis Throws Like A Girl — At 70 MPH She made history at the Little League World Series, becoming the first girl to pitch a shutout. With an uncanny arm and easy cool, she's leading a band of underdogs deeper into the postseason. 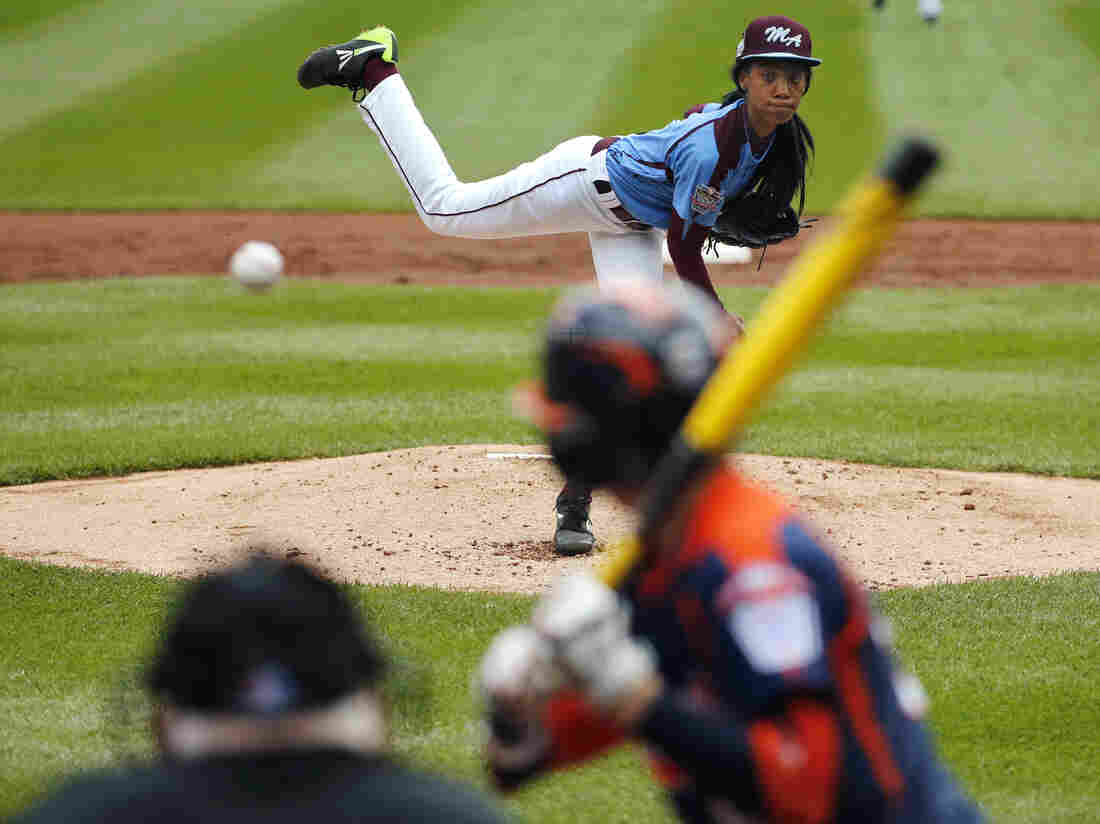 When behind the plate for one of Mo'ne Davis' 70 mph pitches, try not to blink. Gene J. Puskar/AP hide caption 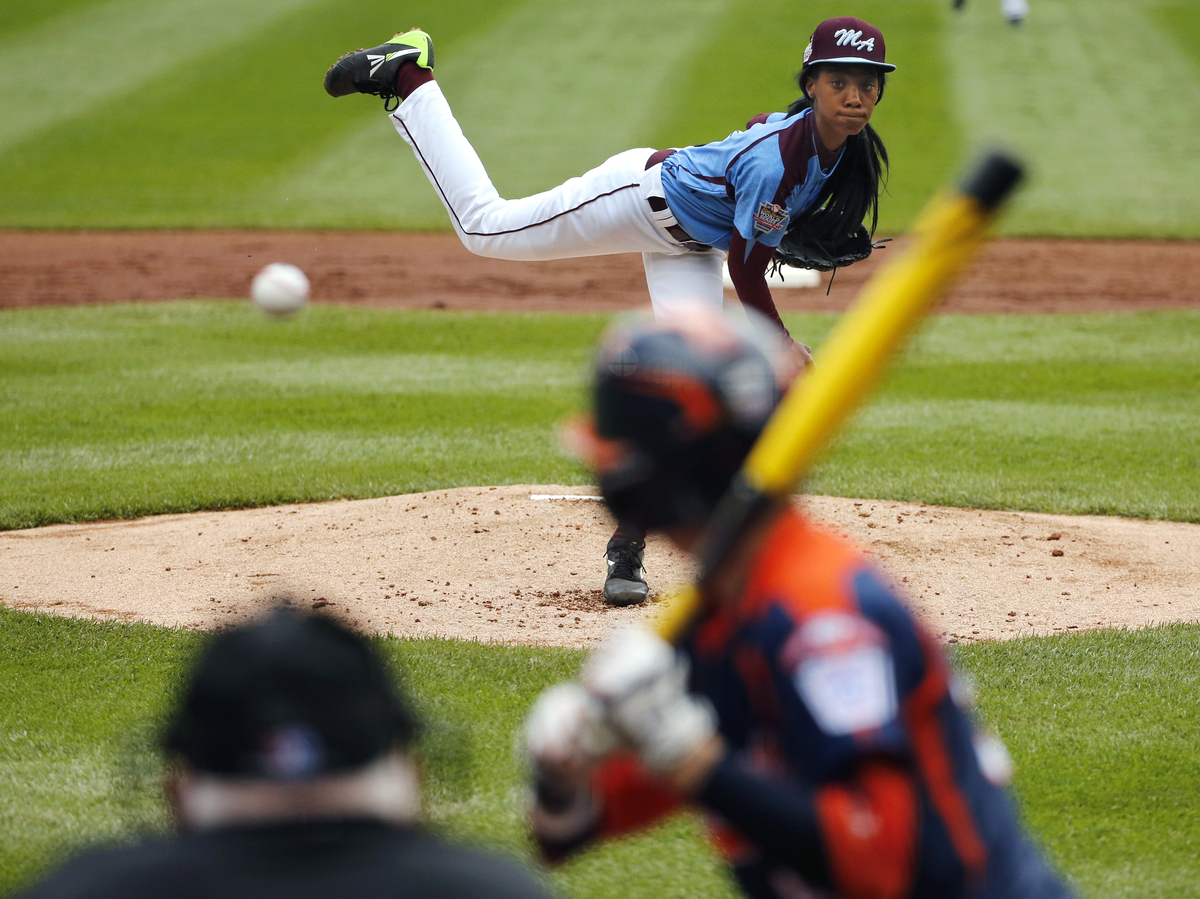 When behind the plate for one of Mo'ne Davis' 70 mph pitches, try not to blink.

The Little League World Series kicked off this week in Williamsport, Pa., and one pitcher in particular has been drawing national attention. Mo'ne Davis, a 13-year-old playing for a Philadelphia team, is just one of two girls playing in this year's series — and she has already made history. On Friday night, Davis became the first female pitcher to throw a shutout in the Little League postseason.

As light faded over a stadium that seats 40,000 fans, Davis entered the bottom of the game's sixth and final inning with the opposing team, a squad from Tennessee, still held scoreless. The moment was all hers. She struck out the first batter, then the second. In the family cheering section behind third base, everyone was on their feet.

The third batter from Tennessee got up to a full count. One more ball, and she would have walked him. Instead, Davis blasted a pitch past him, winning the game with yet another strikeout. Her team mobbed her when she returned to the third-base line.

In the course of her shutout, Davis gave up just two hits and struck out eight batters. And the game was no fluke, either: Davis throws a 70 mph fastball, while most of the boys she faces pitch in the high 50s and low 60s. Even before the game, Davis had delivered suffocating performances for her team, which goes by the name Taney Dragons.

Right after the game, team members were whisked off to talk to ESPN, as the coach of the losing team complimented her play. "She mixed it up," said Chris Mercado, "and that's a good pitcher. And that's what you do."

Davis' step-dad, Mark Williams, seemed overcome with pride. "I can't even talk right now," Williams said. "I don't know what to say. She was tremendous, and her teammates were the best. They got together and threw this thing together." 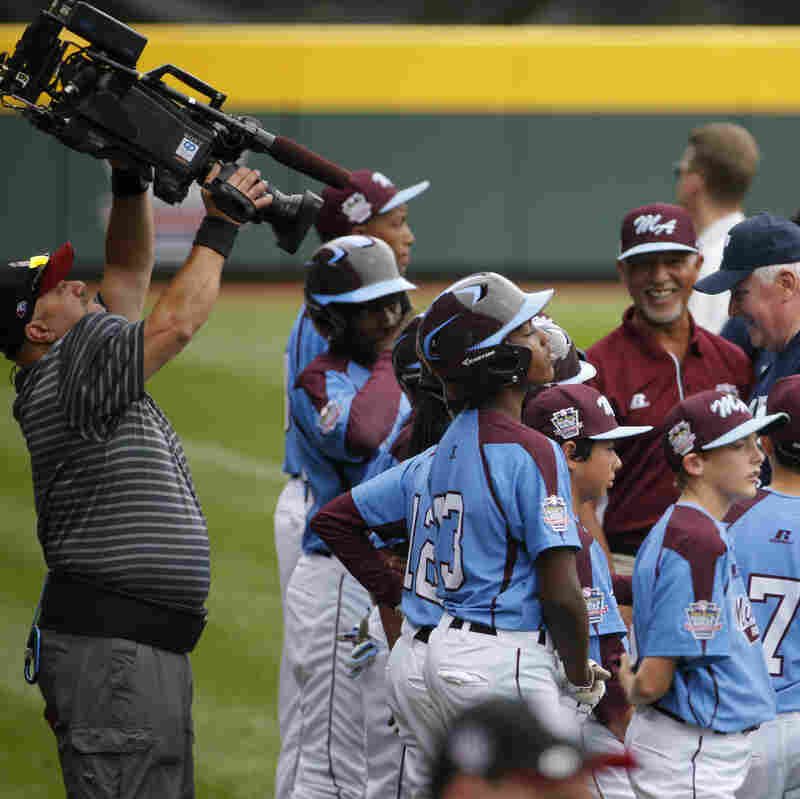 Wherever Davis and her teammates have played, the cameras haven't been far behind. Gene J. Puskar/AP hide caption 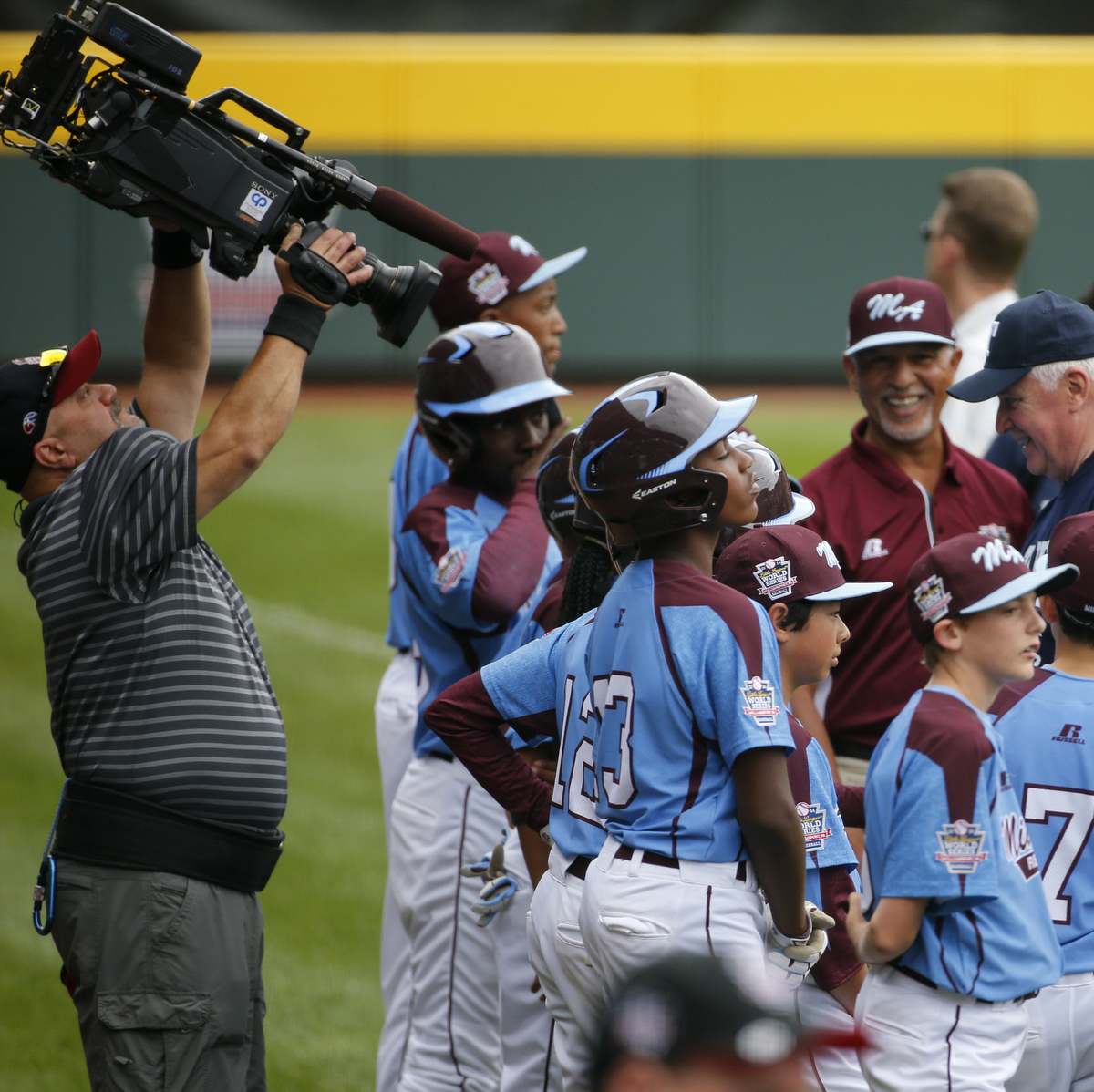 Wherever Davis and her teammates have played, the cameras haven't been far behind.

Even Pennsylvania Gov. Tom Corbett weighed in, suggesting Davis might make the big leagues someday. At the team's press conference, she responded with what's become her trademark cool.

"It's very crazy," Davis laughed. "I didn't even expect that. ... If I do stay in to baseball, hopefully I can pitch, be a professional pitcher."

She revealed her lucky charm to reporters: a little bit of money she keeps in her pocket when she pitches. "It's just that I do well when I've got money in my back pocket. And I know if I ever get hungry, I know I can get something to eat because I've got money."

The profile of the young star has risen quickly, both because of her talent and her novelty as a girl at the Little League World Series. The man handling public relations for the team says that late-night TV host Jimmy Fallon has requested an interview with her, as have a dozen others.

Davis, with long braids fanning out as she pitches, has captivated little girls in the stands. Her step-dad says she started playing at age 6 but got serious about pitching a couple of years ago.

"She says she was pitching one day, and someone hit a home run off of her. So she felt like she needed to work on it more. And from there, it got to this point. So she worked pretty hard on it."

While Davis is certainly the star, her diverse team, which is pulled together from neighborhoods across Philadelphia, has earned respect as constant underdogs. Keith Hendricks, whose son Jahli plays second base for the Dragons, says this team doesn't have the resources of top suburban clubs. They practiced this winter in an empty hangar near the airport.

But Hendricks says they have something else: "Their heart and determination. And how they don't quit."

On Sunday night, the Dragons will face a team from Pearland, Texas. This time, the pressure will be on Davis' teammate Jared Sprague-Lott, who's been named the starting pitcher. Understandably, he's a little bit nervous after Davis' shutout.