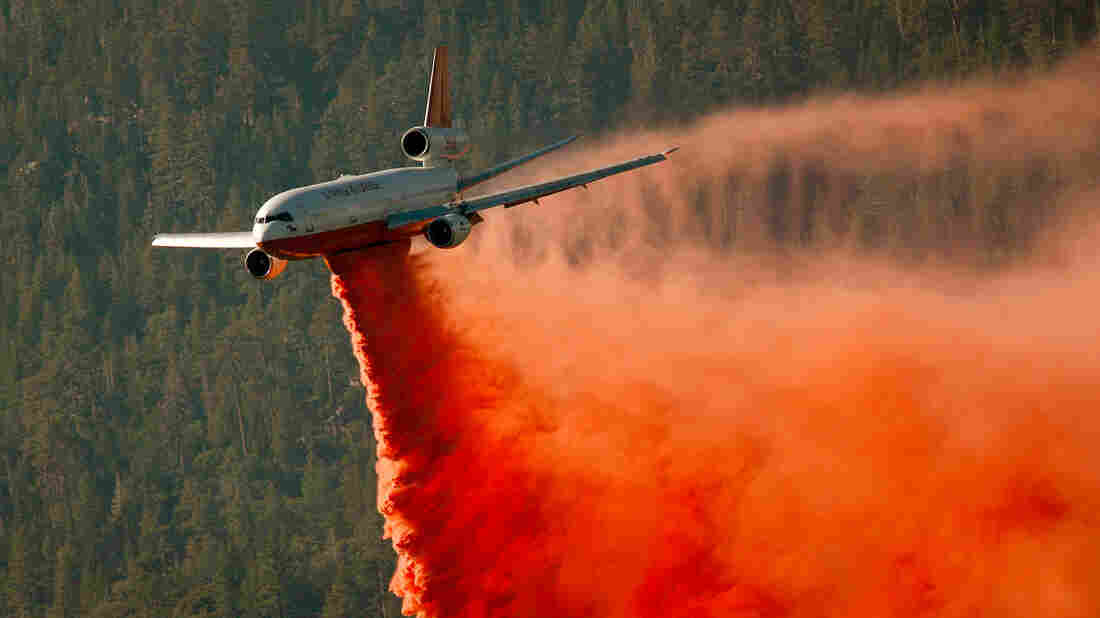 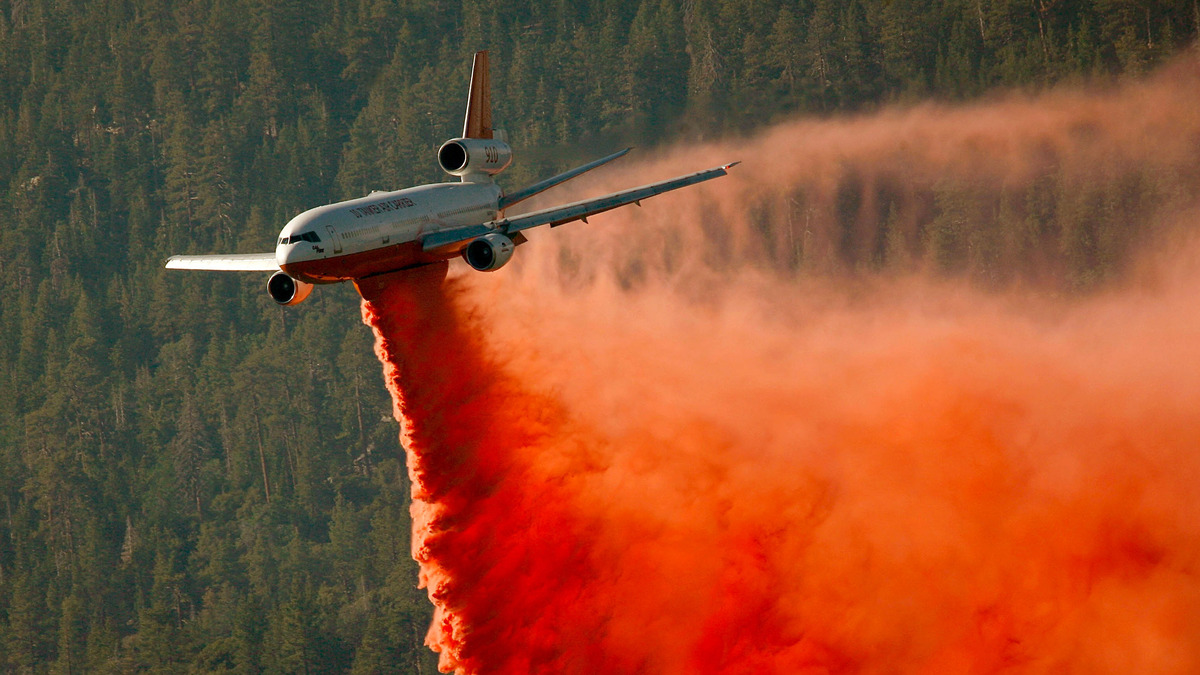 A DC-10 firefighting aircraft drops fire retardant in northern California in 2008. As the Forest Service expands and modernizes its fleet of air tankers, it has recently added several DC-10s.

In the battle against wildfires, the Forest Service often draws on a fleet of air tankers — planes that drop fire retardant from the sky.

But the fleet shrank dramatically in the early 2000s, and by 2012, the Forest Service was woefully low on planes. Now, the agency is quickly increasing the number of planes at its disposal — and modernizing the fleet in the process by adding bigger, faster and more efficient planes.

Bill Hahnenberg, an incident commander with the Forest Service, was initially skeptical of this new generation of air tankers — he wasn't sure how helpful they'd be in the fight against Western wildfires. Then, in August 2012, Hahnenberg was leading the fight against the Springs Fire in the Idaho mountains.

If firefighters hadn't been able to get a handle on it quickly, there was a chance it would be unusually destructive: "There was a high likelihood we would have been managing that fire for, rather than a few more days, probably a few more weeks," he says.

Hahnenberg says the fire was at risk of jumping over a mountain and burning into two small towns. He had just a few hours to get fire retardant on the ground.

"At that point we're looking for the biggest, heaviest hammer we could bring to the table," he says.

That hammer was sitting at the Boise airport, about 40 miles away. It was a giant DC-10 air tanker the government had just hired to fight such fires. Two retardant drops later, the fire was boxed in and ground crews began to get the upper hand. In the end, the Springs Fire turned out to be sort of a nonevent — a sign of success.

"Once an air tanker has contained that fire, we never see that, because it doesn't show up on the news," says Scott Fisher, who oversaw the Forest Service's air tanker program until his retirement this summer.

The DC-10 used on the Springs Fire was part of the agency's effort to grow and modernize the tanker fleet. In 2000, the government had more than 40 air tankers on contract. But many of those were built during World War II and the Cold War, and two crashes of so-called "legacy" air tankers led many to be parked for good. The number of air tankers would later fall to just nine.

Fisher says that number was simply too low. "Not having sufficient resources caused the system to be stretched," he says. "And certainly because of that there were fires that we just did not get to."

The government issued a call to contractors for what's known as "next-generation" air tankers. The Forest Service required that they be jet powered, able to carry at least 3,000 gallons of retardant and capable of flying at a speed of 300 knots.

The same DC-10 that flew over Idaho's Springs Fire two years ago has been back in the state this summer. Les Dixon manages the Boise air tanker base where the jumbo jet gets filled with more than 11,000 gallons of fire retardant.

"That's the equivalent of about 3 1/2 large air tankers combined. You've got one aircraft or you're working four aircraft," Dixon explains. "So risk management goes down — you don't have as many aircraft working."

Technology Tracks Crews Through The Fog Of Wildfire

The DC-10 is the largest of the new planes, and perhaps best symbolizes the government's effort to upgrade. New Mexico-based 10 Tanker Air has built three of the jets for the Forest Service, and CEO Rick Hatton says the new planes are just better than the alternatives.

"I don't know an incident commander who has ever run a fire and had a load of retardant come and say, 'You got here too soon and you brought too much,' " Hatton says. "It's always the opposite."

These jets are only one piece of the Forest Service's firefighting tool kit. But Bill Hahnenberg, the fire manager who used the DC-10 in Idaho two summers ago, says the new planes are helping firefighters get an upper hand early.

"Boxing it in when it's smaller is a whole lot easier [than] when it's bigger and gets established in some difficult fuel and difficult terrain," Hahnenberg says.

Ultimately, the government hopes to have a roster of about 28 air tankers — a goal likely to be reached in the next two or three years.