Accessibility links
One Year After Calif. Rim Fire, Debate Simmers Over Forest Recovery This third-largest wildfire in California's history struck the area near Yosemite National Park. Since then, controversy has broken out over whether to log the trees and replant seedlings. 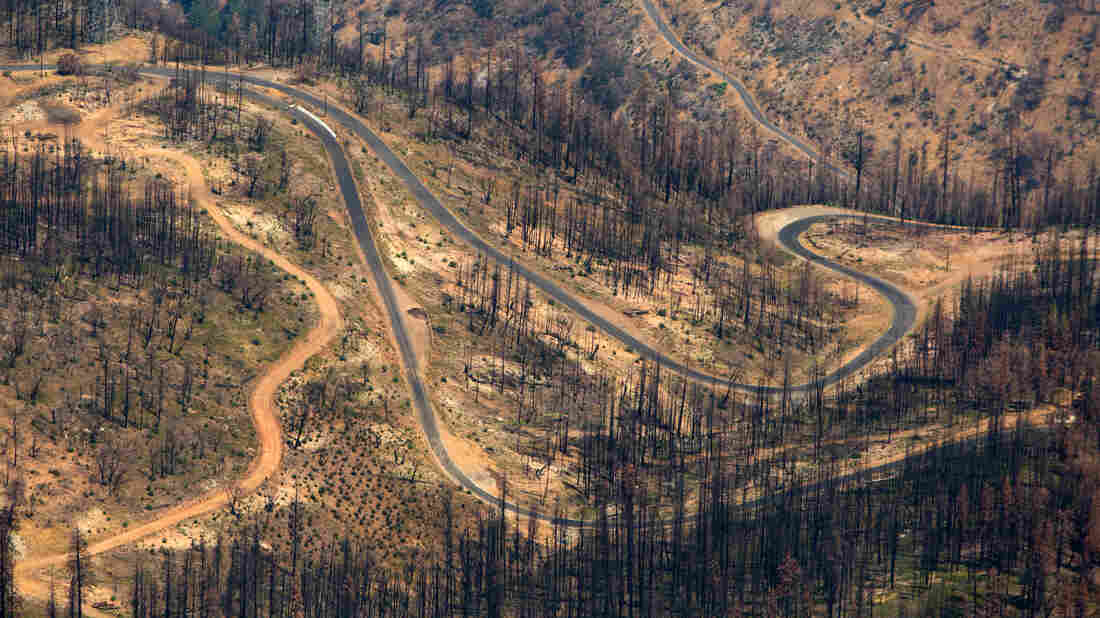 The Rim Fire burned about 400 square miles in Yosemite National Park and the surrounding area, making it the largest wildfire ever recorded in the Sierra Nevada. Mark Boyer/KQED hide caption 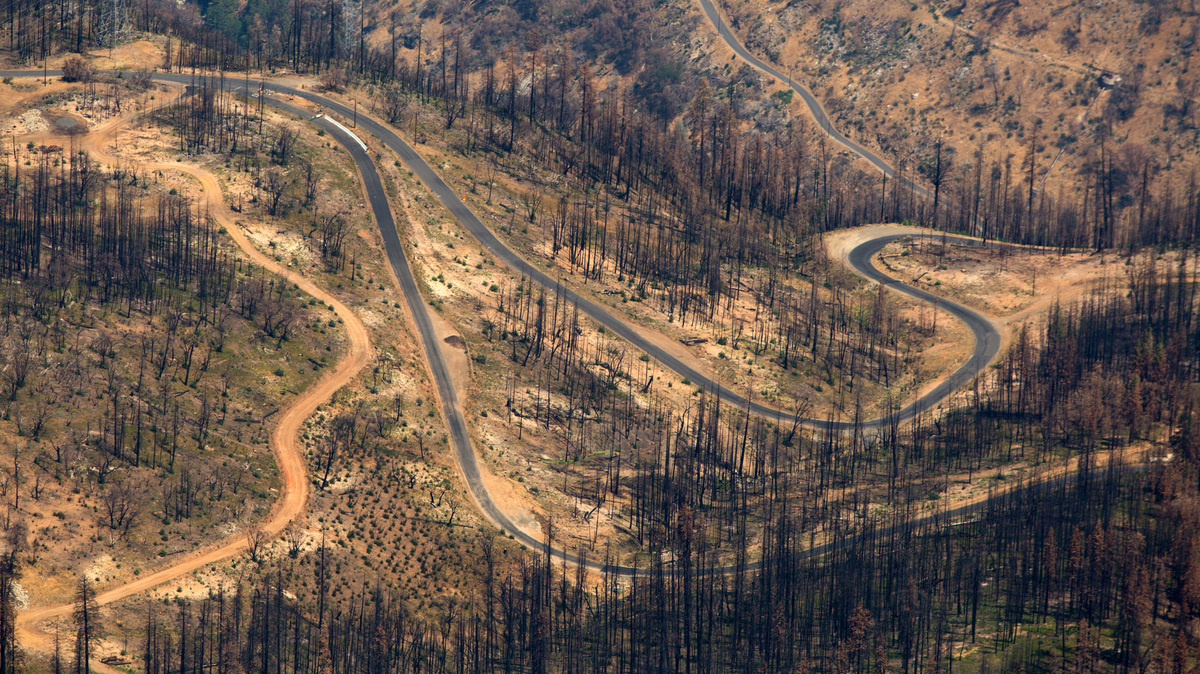 The Rim Fire burned about 400 square miles in Yosemite National Park and the surrounding area, making it the largest wildfire ever recorded in the Sierra Nevada.

Eric Knapp breaks apart a burned pine cone, looking for seeds — in his line of work this is considered a clue.

"Going into an area after a fire, you almost feel like CSI, you know, sleuthing," Knapp says.

He is standing in a part of the Stanislaus National Forest that was severely burned by the Rim Fire. Knapp, an ecologist with the U.S. Forest Service, is studying how forests recover.

"It's completely dead," he says. "These trees won't be coming back to life."

A lot of the forest was charred like this.

One year ago, a huge wildlife was burning near Yosemite National Park in California. The Rim Fire was the largest ever recorded in the Sierra Nevada, consuming 400 square miles and costing more than $100 million to fight. 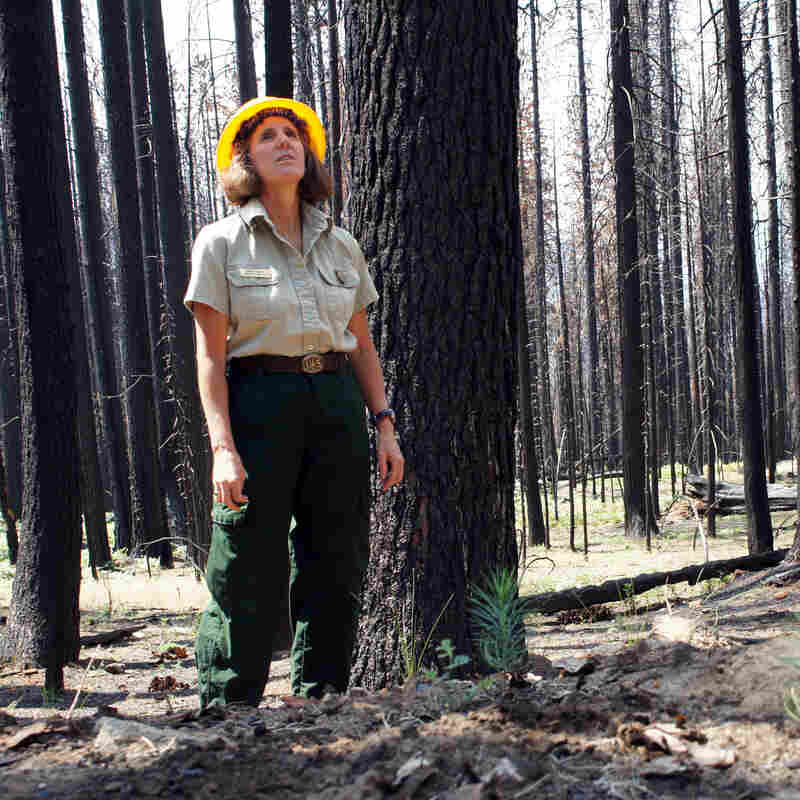 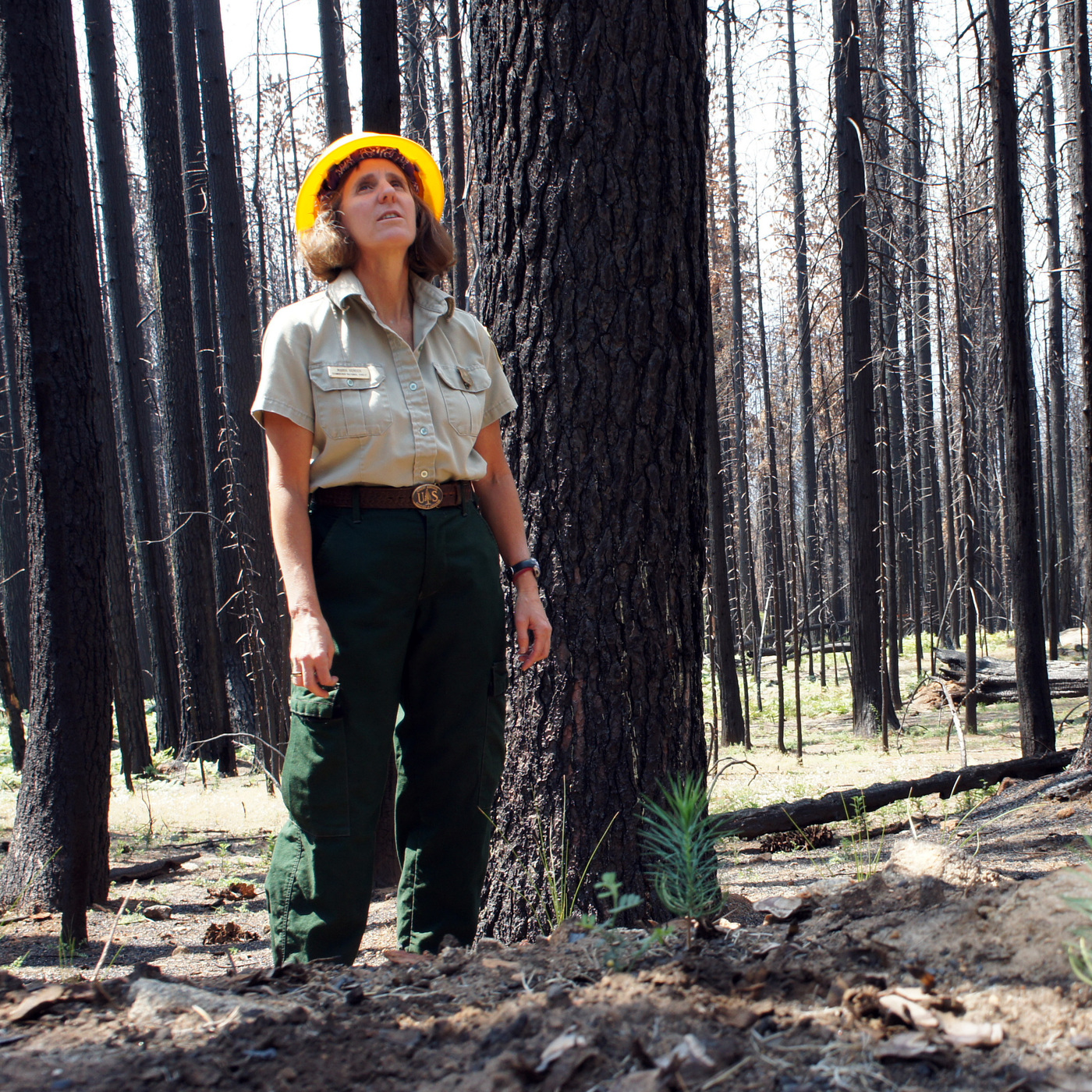 It was fed by high winds and bone-dry conditions, and a hunter was recently charged with starting it with an illegal campfire. Now, controversy has broken out over how to help the forest recover — whether dead trees should be cut down and new trees should be planted.

The dead trees around Knapp will stay standing for at least a decade. He says wildlife, like the black-backed woodpecker, will move in before the trees fall down.

"It's woodpecker utopia," Knapp says. "But then after eight or 15 years, when they're on the ground, then it becomes a different management concern."

The downed logs could become fire risk, making a future fire more intense. So the Forest Service has proposed allowing logging companies to harvest the trees on 44,000 acres.

"It makes to create jobs here in California, get our wood here and create jobs for Californians," says Mark Lust, who works for Sierra Pacific Industries, the second-largest lumber producer in the country.

He is at a sawmill not far from the Rim Fire where hundreds of burned trees are being stacked.

"If you look beyond the bark, the wood looks pretty good," he says.

These trees are from the company's private land, which also burned in the Rim Fire. Luster says opening Forest Service land for logging would provide an economic boost for the region. But he says that has to happen in the next year or so because bark beetles are already damaging the trees.

Several environmental groups are determined to stop it before then.

Justin Augustine, an attorney with the Center for Biological Diversity, a nonprofit group, is one of them.

"Humans, when they look at a burned forest, they think it's devastation," Augustine says. "But just the opposite happens out there in the forest."

The Forest Service plans to leave four to six dead trees per acre for wildlife to use, but Augustine says that's not enough.

"The more severe a fire is, the better that area is going to be for black-backed woodpeckers," he says.

The Forest Service says it's trying to balance both sides — some areas won't be logged, but others will.

Controversy is likely to continue with the next question the agency faces — whether to replant young trees to speed along recovery. The Forest Service's Maria Benech says there are huge patches of dead trees in the Rim Fire and seeds could take a long time to spread.

"We estimate it could take centuries — a couple centuries — to really get that back in because there's no seed source," says Benech.

Young tree seedlings are usually planted densely, 10 feet apart in rows. It's been done this way in the West for decades, but it has its pitfalls.

LOOK: The California Rim Fire As Seen From Space

After fires in 1987 completely scorched the trees, tree plantation, as they're called, were planted. But such densely packed foliage helped the Rim Fire spread.

"People have criticized how close we planted trees," Benech says. "But the idea all along was to come in, Year 7, Year 10, and thin those out."

But it takes money to cut trees and thin a forest. The Forest Service had made plans to do it, but hadn't gotten the funds yet. Without that, the replanted trees went from restoration to liability.

Malcolm North, a research scientist with the Forest Service, admits "plantations are really prone to burning up."

But there may be a better way to replant trees after wildfires. North says researchers have learned a lot about how Sierra Nevada forests once looked, before Smokey Bear and decades of fire suppression.

"What we now know is that we eventually want to produce trees that have kind of a clumped and open — a group-y, gap-y type structure," North says.

Trees could be planted in a way that mimics that natural pattern — in clumps instead of rows. North says that could make them more resilient to future fires.

There's still a lot to learn about how do that type of restoration. But that's the silver lining of the Rim Fire. With such a high-profile event comes the opportunity to learn from it.