Accessibility links
'Winter In The Blood' — A Native American Story That Leaves 'Feathers Or Leather' Cliches Behind Filmmakers Alex and Andrew Smith knew American Indian writer James Welch — he was a family friend. But as non-Native Americans, they had concerns about adapting his iconic novel, Winter in the Blood. 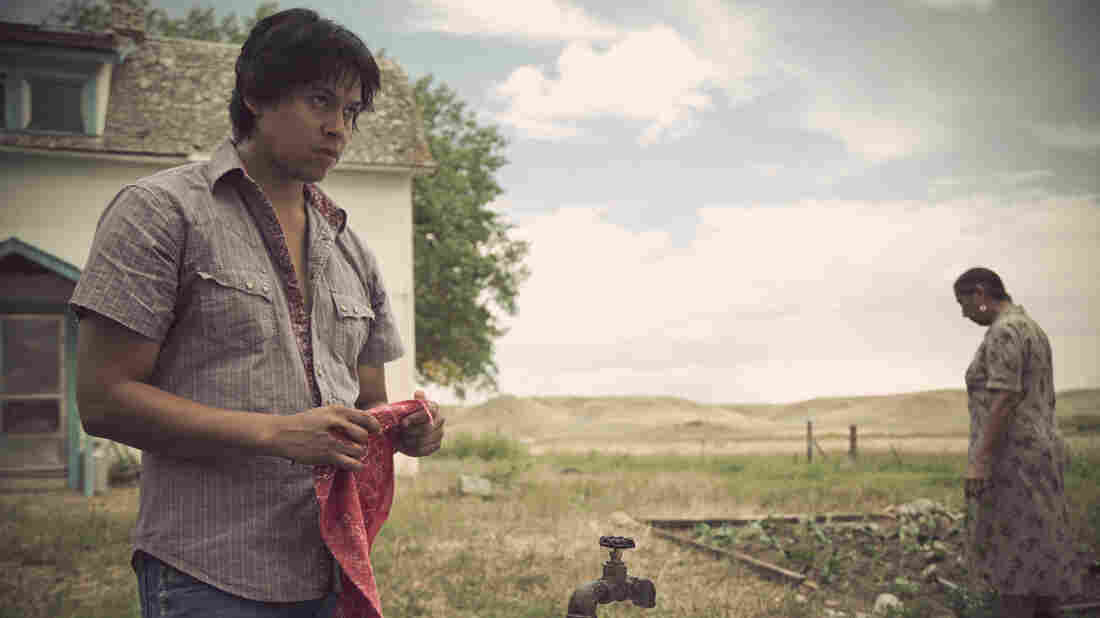 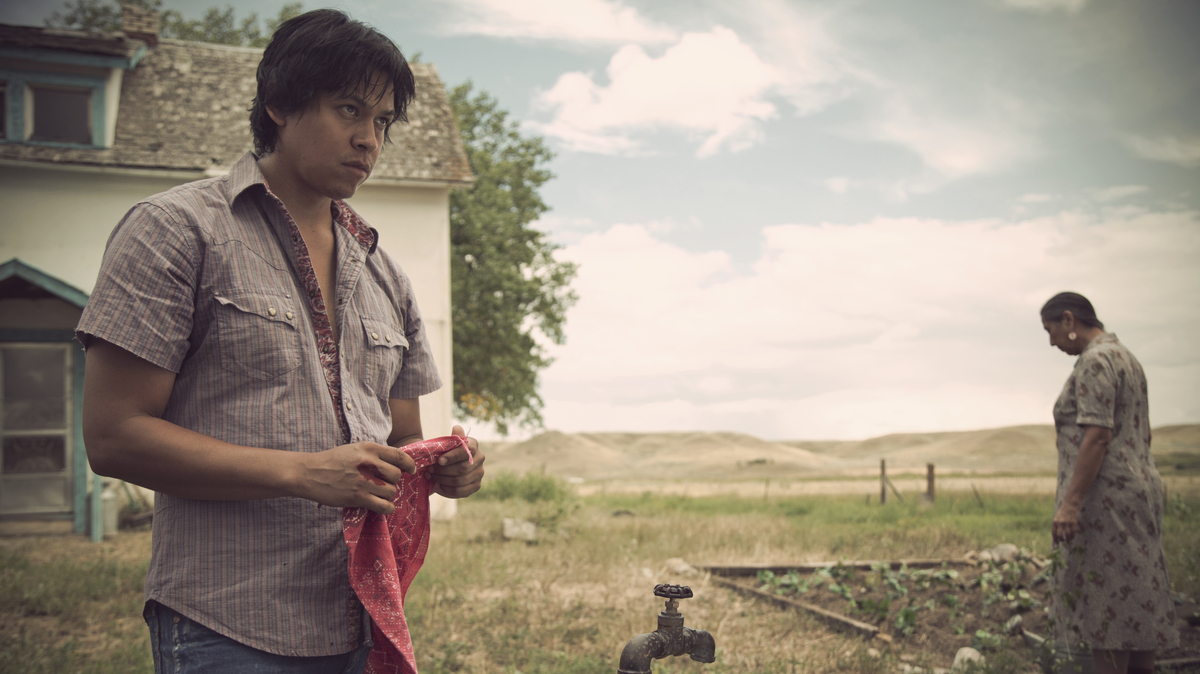 The new film Winter in the Blood is based on a landmark of literature from the American West: a novel, published to critical acclaim in 1974, about a 30-something American Indian man living in Montana. It was written by Native American author James Welch, and adapted for the screen, for the first time, by two non-Native Americans — twins Alex and Andrew Smith.

In a lot of ways, the Smith brothers were the perfect people to adapt Welch's novel: They grew up in rural Montana; their mother helped found the Sundance Institute; their father taught literature at the University of Montana; and James Welch was a close friend of the family — the Smith twins knew him as Jim. Still, they had some concerns about taking on Welch's iconic work. 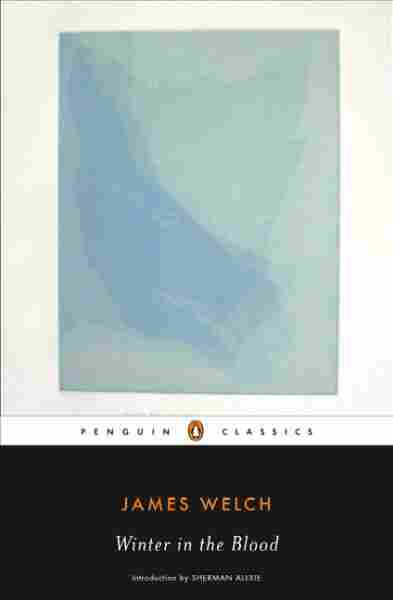 Winter in the Blood

"The first question we asked when we thought about adapting this novel was: Is it OK for us to do this?" Alex says. "And, in fact, we asked our friend Sherman Alexie, who's sort of one of the preeminent Native American authors out there and was hugely inspired by James Welch and by this novel. And he said, 'Not only do I think you guys are perfect for it; I think you're the only people who should do it because you knew Jim and because you grew up in this landscape.' And he said, 'I'll help you.' "

With that, Alexie signed on as associate producer.

'A Conduit Between Jim And The Performers'

From the first moments, it's clear the film isn't a typical Western. It opens with a few seconds of classic, big-sky landscape but then moves to the lead character, Virgil First Raise, waking up hung over in a ditch. "Comin' home is not easy anymore," Virgil says. "It never was a cinch, but it'd become a torture."

Throughout the film, Virgil struggles with who he is and where he belongs. Alex says the brothers always knew that as non-Native Americans they had to tread carefully on Native American material. Andrew adds that they relied on their mostly Native American actors to keep them honest.

"We thought of ourselves as being a conduit between Jim and the performers, and we cast 80 percent or over Native American, and we cast very specifically to be faithful and to be accurate to the book and to the experience," Andrew says. "And we were so fortunate to find — and it was the first person we wanted — was Chaske Spencer to play [Virgil First Raise]. He grew up in Poplar, Mont., and in the panhandle of Idaho, so he's a local guy who knew that terrain. And we just handed it over to him, you know. He could bring so much more personal experience into it."

Spencer is probably best known for playing werewolf leader Sam Uley in the Twilight movies. He's Lakota Sioux and grew up on reservations. "A lot of the cast," he says, "the native cast, we were able to bring that into the production. And also, you know, they're really cool directors. They're really good guys. So they were very open about suggestions and stuff [for] how would this scene happen for that particular tribe."

But Spencer defers to Cynthia Kipp when it comes to authenticity. She's a Blackfeet elder who plays Virgil's grandmother. "She spoke her native tongue and also sang some very, very moving songs," Spencer says. "And I think that she brought a balance to the film. A very gentle soul."

Humanity Over 'Feathers And Leather'

Patty Limerick, a historian and director of the Center of the American West at the University of Colorado, Boulder, says Winter in the Blood adds an important dimension to Native American characters on screen. She points to the old blind man in the film who says several times that people have mistakenly thought he was dead:

"That is a very intense and aimed commentary on the notion that the American people expect the film to go the way that films go, which is: 'Well, they were quite noble and now they're gone.'

"They're still there. They're haunted; they're troubled; they're not a world apart from anguished white people, of which we have seen many, many movies. ... And if we didn't have anguished white people, we wouldn't go see movies about them because the anguish is really what makes audience's feelings come into play. So, in some ways, it's just that the complexity of human character finally got extended to Indian people."

That humanity is what Alex and Andrew Smith see as the heart of their film and the original novel. James Welch, who died in 2003, put it this way to NPR in 1990: "I always felt that if I could just get people to read my books, I think they could get a better understanding of who Indian people are; what kind of problems do they have; what are their triumphs, you know, and failures. And maybe become more compassionate towards Indian people."

Alex says Welch's voice stayed with him and his brother as they made the film:

"His presence, his absence, the combination were with us the whole time. Knowing how, sort of, Jim's sense of humor and his sense of justice and sense of understanding the landscape and how people in the West behave were sort of in our echo chamber. I mean, whenever we were working this project, we were often saying, 'What would Jim say? What would Jim do? What would Jim think about this?' "

Andrew remembers that Welch didn't want any film to become "too Indian" or clichéd — no "feathers or leather," as Welch put it. So the Smith twins left them out.