Accessibility links
In Changing America, Gay Masculinity Has 'Many Different Shades' As attitudes toward homosexuality shift in the U.S., many gay men say that's created not just more legal freedoms but also greater freedom to express their gender identities. 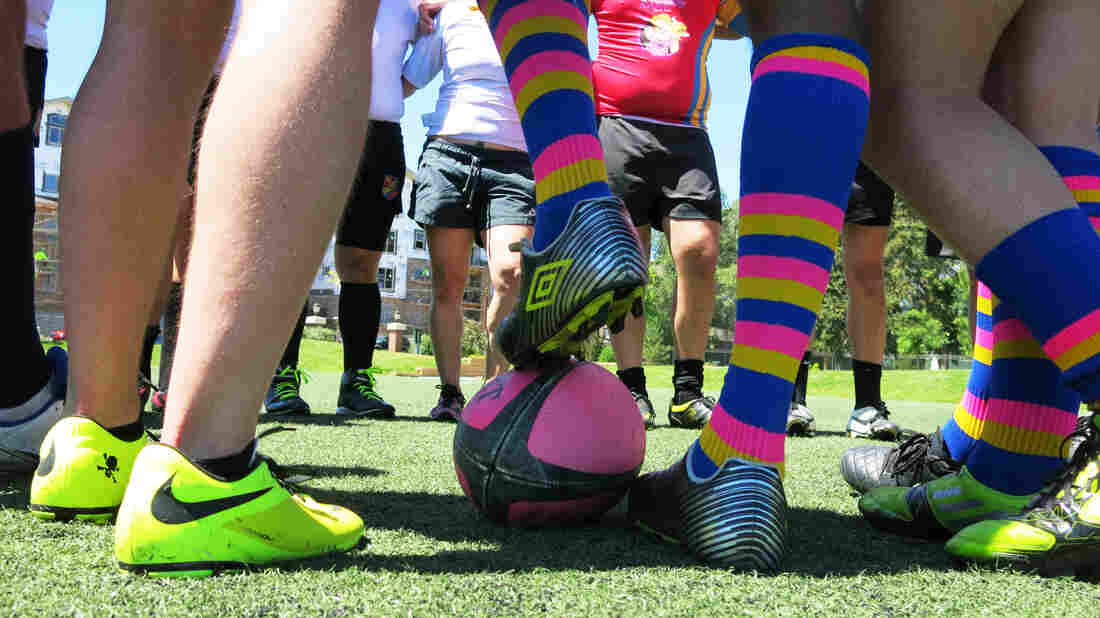 The Colorado Rush, a gay rugby team in Denver, at practice. "I've always thought of myself as ... the rugby player that happens to be gay," says Skyler Meyer. "I never want to be the gay man who happens to play rugby." Luke Runyon/KUNC hide caption 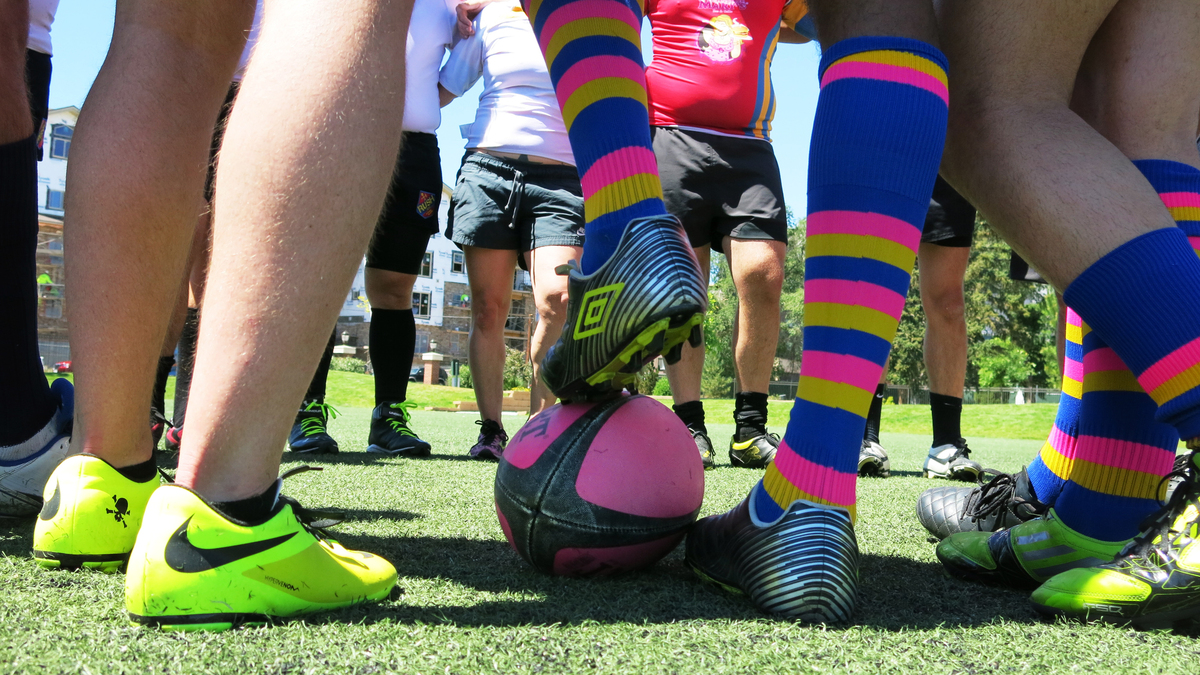 The Colorado Rush, a gay rugby team in Denver, at practice. "I've always thought of myself as ... the rugby player that happens to be gay," says Skyler Meyer. "I never want to be the gay man who happens to play rugby."

Life as a gay man in the U.S. has changed in the past decade — the law and cultural attitudes toward homosexuality have shifted. And those greater social and legal freedoms have also changed how some gay men choose to express their masculinity — and their femininity.

That's true for several players with the Colorado Rush, a gay rugby team in Denver. On a warm, breezy Saturday, about two dozen men in vibrant jerseys and shorts squat and lunge their way across a rugby field. Today's practice has the players tackling each other and running drills. With its traditionally bulkier players and brutal man-on-man tackles, the sport can be almost hypermasculine.

After practice, a few players stop to talk about masculinity — and what that concept means to them.

"What makes or breaks a rugby player is their attitude," says Jeremy Ballard, 33. "It's a mental component. It's not, like, how buff they are or how big they are, or whatever. It's all in your head and what kind of attitude you bring to the pitch — and to me, that's masculinity."

But when the conversation broadens from definitions of masculinity on the rugby field, Ballard says, "I would say in a lot of ways, I definitely carry myself as a man, I feel like I'm a man, but I definitely have feminine qualities. Like my voice tends to be more feminine. I'm emotional."

And that's at the heart of modern gay masculinity — it's a spectrum. After he came out, Ballard says, he felt a certain freedom: to hold on to the traditionally masculine parts of himself, like playing rugby, but also to express himself in other ways — ways that might have been off limits while still in the closet. 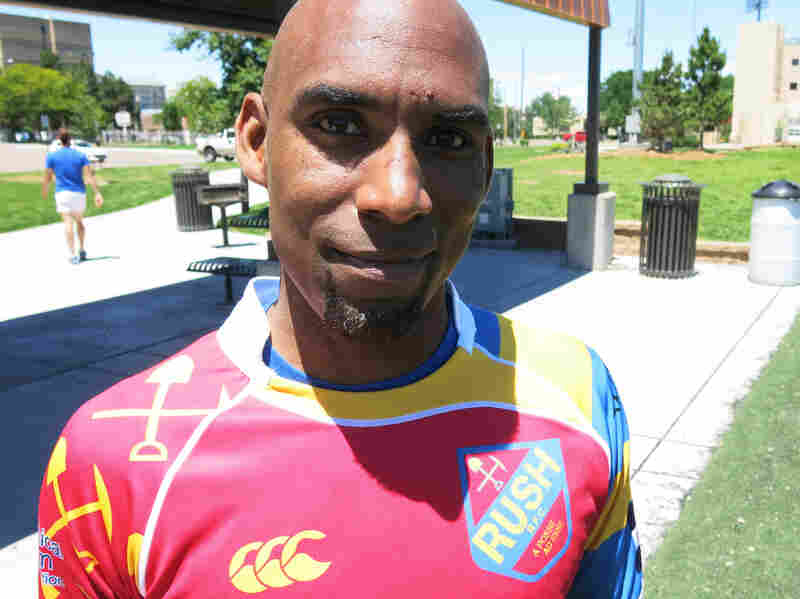 Part of the reason Nicholas Miller enjoys rugby, he says, is that it's a rough sport that gay men are "not expected to play." Luke Runyon/KUNC hide caption 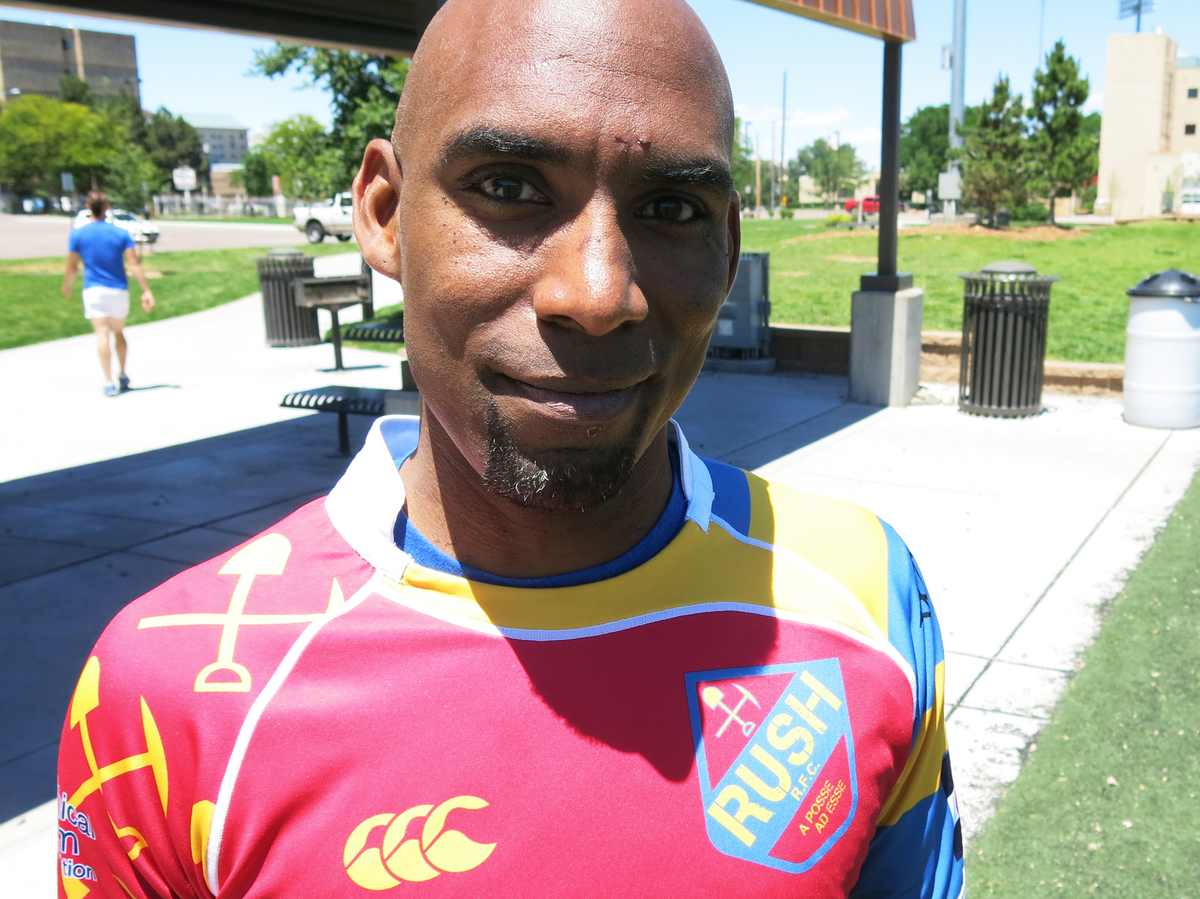 Part of the reason Nicholas Miller enjoys rugby, he says, is that it's a rough sport that gay men are "not expected to play."

Nicholas Miller, 43, who plays outside center for the team, also appreciates that people who hold stereotypical views of homosexual men may be surprised by a gay rugby team.

"I'm a man that likes men. I want to associate myself with guys that are masculine," Miller says. "And I think that's part of the reason why I like rugby, and being around this group of guys that are playing this rough sport we're not expected to play."

Eric Anderson, who studies masculinity and sport at the University of Winchester in the U.K., says that "what it means to be feminine varies, both by the age that one is and the culture that one grew up in."

And, Anderson adds, "it's changing every year. Femininity is becoming more and more accepted, and as it becomes accepted, it's just not called 'femininity' anymore."

But while mainstream attitudes have changed, homophobia and violence toward gay men still exist. Expressing gender across that spectrum can come at a cost. And embracing a more fluid identity can be a challenge.

For rugby player Skyler Meyer, at 21, the team's youngest player, coming out of the closet meant his sexuality was settled, but his gender — the way he held himself and interacted with others — was still in flux.

"I fell into the stereotypes," Meyer says. "I didn't have any big gay role models. I grew up always wanting to be a lawyer, and I realized I was gay and was like, 'Oh, well now I have to be a hair stylist or something.' And it was just devastating to me," he says with a laugh.

Meyer grew up in a suburb of Salt Lake City and says his family was supportive while he came out.

Who's The Man? Hollywood Heroes Defined Masculinity For Millions

Teammate Mike Fuller, 30, says his upbringing in a conservative Florida home played the biggest role in defining masculinity for him. "I had to be a certain way, and if I wasn't that way, then I was gay — I was a faggot," he says of the pressures he felt.

Even today, when people mistakenly think he's straight, or he's hit on by a woman, Fuller says he "can't help but take that as a compliment."

But he doesn't like that he feels that way. While growing up, he says, his family and friends imprinted on him a clear distinction between straight men and gay men.

"The idea that I had in my head of what a gay guy was, was a drag queen," he says. "That's what I thought I was supposed to be. ... If I'm gay, then I'm going to have to start wearing a dress at some point — and I have," he says, laughing.

After the joking around, the guys start plotting out practice dates for the upcoming season. They will be playing rugby teams across the country this year, and while some matchups are against other gay teams, most are with ones that happen to be straight.