Songs Of Innocence And Bitter Experience In 'Dreamless Dead'

Songs Of Innocence And Bitter Experience In 'Dreamless Dead' 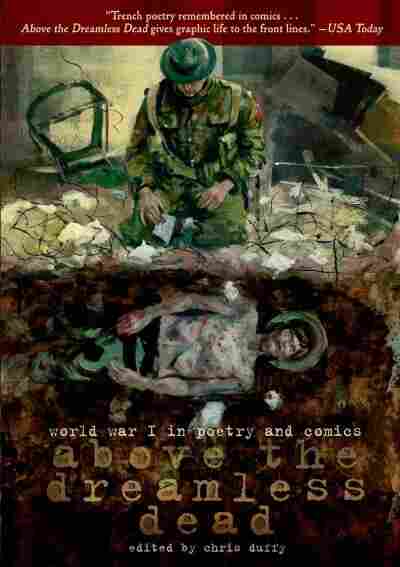 Above the Dreamless Dead

World War I in Poetry and Comics

British army troops once kicked a soccer ball around as they went into battle. True story! In fact, it's one of the first and best anecdotes in Paul Fussell's classic study of World War I, The Great War and Modern Memory. That astonishing image illustrates just how naive the recruits were about modern war's potential for unprecedented destruction — and it sets the stage for their devastating shock and disillusionment.

Capturing this dynamic is one of the central tasks facing editor Chris Duffy in Above the Dreamless Dead: World War I in Poetry and Comics. Another anthology might focus on the horrors and banalities of war, but a collection of Great War poets needs first and foremost to contrast innocence with bitter experience. Because of this necessity, the artists' wildly discordant styles actually complement each other. Thoughtful, minimalist sketch work by Sammy Harkham and Sarah Glidden is blasted, at the turn of a page, by the overwhelming ink storms of George Pratt and Peter Kuper. It's an uncanny evocation of the soldiers' emotional crisis.

Sometimes, simply drawn sequences are anything but innocent. In Charles Sorley's "All the Hills and Vales Along," artist Kevin Huizenga's marching men look like toy soldiers. It makes their dead limbs more jarring when they protrude into the frame. Hunt Emerson's adaptations of soldiers' songs are just right for their saucy content — broad and cartoony, and the songs themselves are a welcome respite from the Trench Poets' carefully crafted mourning. "I don't want to be a soldier, I don't want to go to war!" one goes. "I'd rather hang around Picadilly Underground living off the earnings of a well-paid whore!" (The rest is unprintable.)

Isabel Greenberg's style is uniquely suited to her subject. Adapting Osbert Sitwell's "Therefore Is the Name of it Called Babel," she uses sparse outlines and deftly hatched shading, like a woodcut, to depict a demolished town with a minimum of detail and a strong whiff of Expressionism. She also created the inside cover art, and her rows upon rows of zombie soldiers are both disquieting and darkly funny. Her (living) soldiers have blank, staring Picasso eyes that are as chilling as more detailed panels, like the maggot-filled eye of Eddie Campbell's intricately depicted corpse.

That's not to say Campbell's section, a chapter of Patrick MacGill's 1916 novel The Great Push, isn't extraordinary. His artistic technique seems to involve dotting the page with diluted inks and water; the result is a work that's all about light and the terror that comes with the lack of it. His corpse splayed on barbed wire, which MacGill says embodies "The Futility of War," looks Christlike, maggots or no.

Campbell is among the contributors, along with Pratt and Hannah Berry, who fill up their pages with assertive deep grays. In Pratt's case, it's to summon the total experience of war. His soldiers seem bedeviled by clustering cubist panels and blasts of random texture. But even wrapped up in army gear and half-buried in schematic trenches, these soldiers are drawn with a fine understanding of human movement and proportions.

That said, it's a shame Duffy saw fit to assign Pratt to all three of the included Owen poems. Wilfred Owen is the star of the Trench Poets; most people recall reading his work "Dulce et Decorum Est" in high school. He was also a formal experimenter who abandoned late romantic rhyme schemes in favor of harsher-sounding ones that would reflect the disintegration going on around him. All this would seem to call for as wide a group of interpreters as possible.

Overall, though, the book expresses the chaos in the Trench Poets' souls. That's no easy feat these days, when war seems to be everywhere, and yet most of us don't suffer from it directly. It's quite a task to remind readers that such innocence may be headed for a fall.