Accessibility links
Hamas Admits To Kidnapping And Killing Israeli Teens The leader of the group says it carried out the kidnapping in the hopes of exchanging the teens for prisoners held by Israel, and didn't intend to set off the massive conflict that followed. 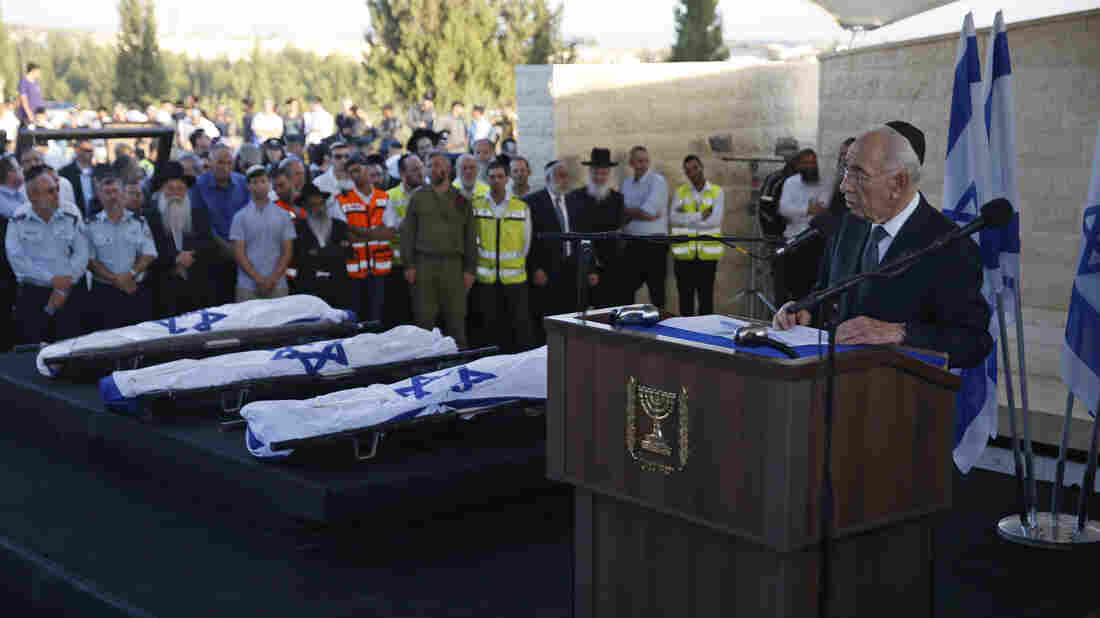 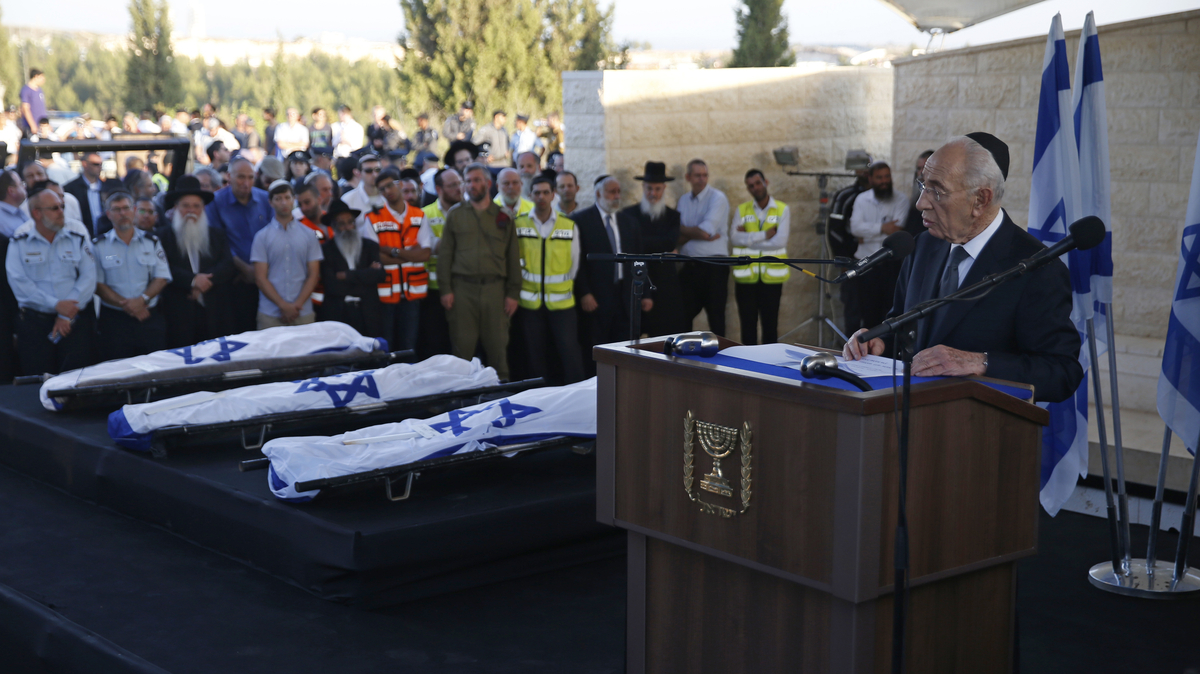 Israeli President Shimon Peres (right) eulogizes the three Israeli teens who were abducted and killed in the occupied West Bank, Gil-Ad Shaer, U.S.-Israeli national Naftali Fraenkel, both 16, and Eyal Yifrah, 19, during their joint funeral July 1 in the Israeli city of Modiin.

A senior Hamas leader has said the group carried out the kidnapping and killing of three Israeli teens in the West Bank in June — the first time anyone from the Islamic militant group has said it was behind an attack that helped spark the current war in the Gaza Strip.

Saleh Arouri told a conference in Turkey on Wednesday that Hamas's military wing, the al-Qassam Brigades, carried out what he described as a "heroic operation" with the broader goal of sparking a new Palestinian uprising.

Hamas Conflict Could Have Lingering Impact On Israel's Economy

"It was an operation by your brothers from the al-Qassam Brigades," he said, saying Hamas hoped to exchange the youths for Palestinian prisoners held by Israel.

Hamas has repeatedly praised the kidnappings, but Arouri, the group's exiled West Bank leader, is the first member to claim responsibility. Israel has accused Hamas of orchestrating the kidnappings and identified two operatives as the chief suspects. The two men remain on the loose.

The kidnappings of the three teens while they were hitchhiking on June 12, along with the discovery of their bodies two weeks later, sparked a broad Israeli crackdown on Hamas members throughout the West Bank. Hamas responded with heavy rocket fire out of the Gaza Strip, leading Israel to launch an aerial and ground invasion of the territory.

More than 2,000 Palestinians, most of them civilians, have been killed in the fighting, according to Palestinian and U.N. officials, while 67 Israelis have also been killed, all but three of them soldiers. An Egyptian effort to mediate a cease-fire collapsed this week, leading to a resumption of heavy fighting.

Arouri told the conference that Hamas "did not have the intention at this time to ignite a large battle." He said his group did not believe Israel wanted a war either. "But Allah has chosen and willed that a large battle would be ignited," he said.

Arouri is one of Hamas' most senior figures. He founded Hamas' military wing in the West Bank two decades ago and now commands the group's operations in the area from exile in Turkey. He was deported several years ago in a deal that freed him from Israeli prison.

Earlier this week, Israel identified Arouri as the mastermind of an alleged plot to launch an uprising in the West Bank aimed at toppling Palestinian President Mahmoud Abbas.