Accessibility links
With Initial U.S. Airstrikes A Success, Will They Expand? The U.S. continues to mount airstrikes against Islamic State targets in Iraq, but some analysts say the campaign is not broad enough. 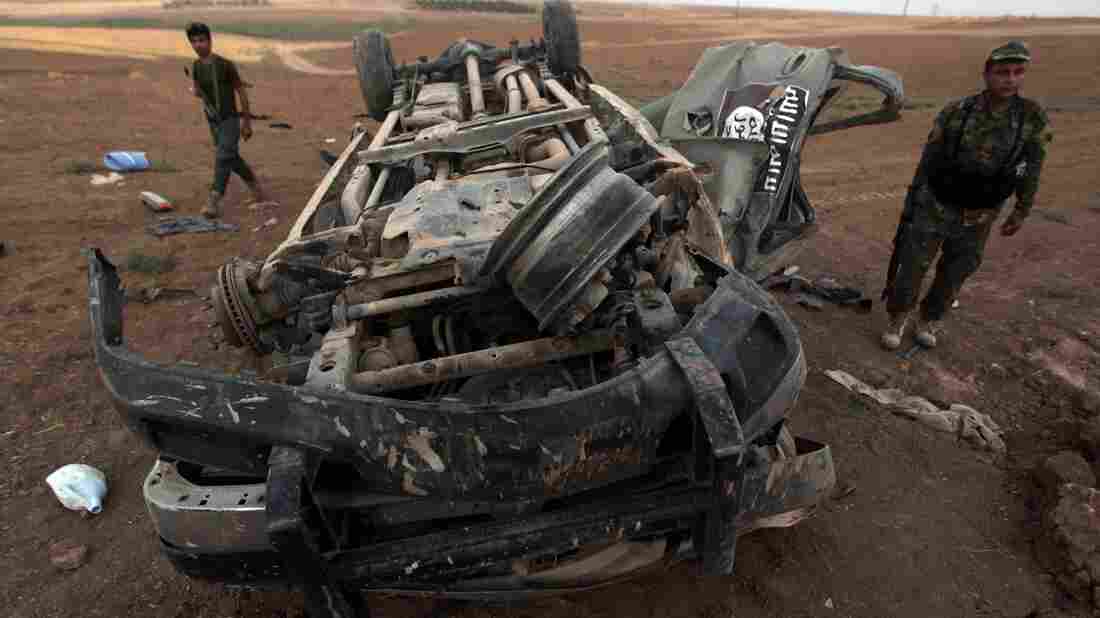 Peshmerga fighters inspect the remains of a car bearing an image of the trademark jihadist flag, after it was targeted by an American airstrike in the village of Baqouba, north of Mosul. The car reportedly belonged to Islamic State militants Ahmad Al-Rubaye /AFP/Getty Images hide caption 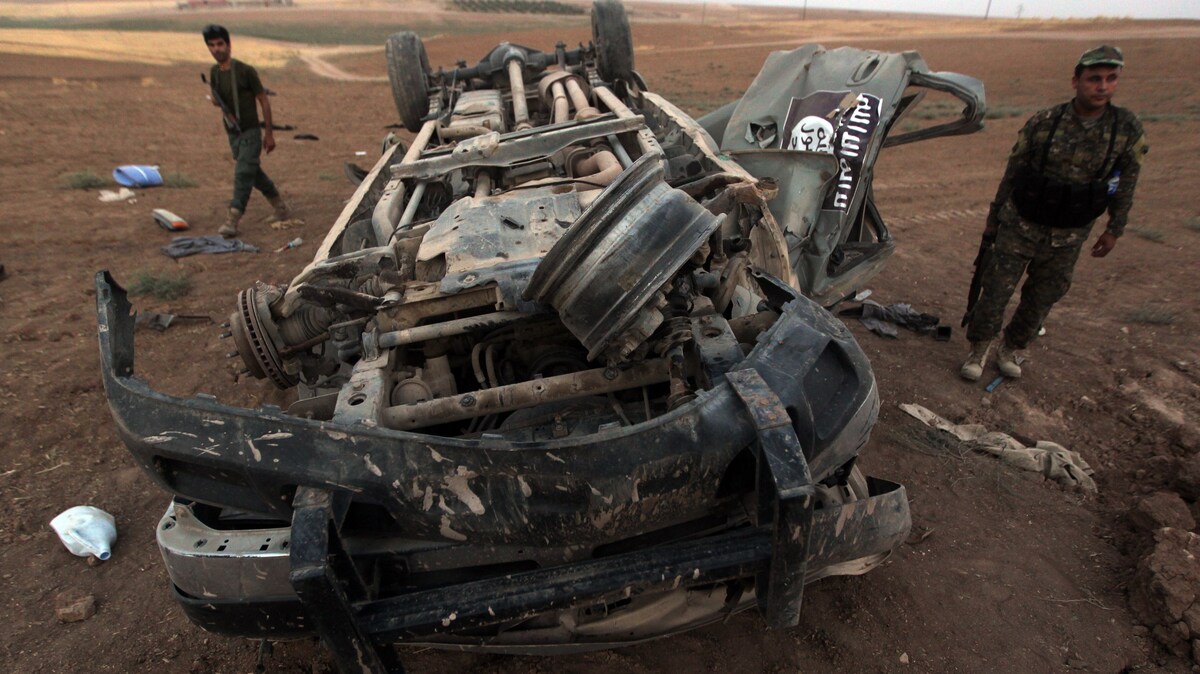 Peshmerga fighters inspect the remains of a car bearing an image of the trademark jihadist flag, after it was targeted by an American airstrike in the village of Baqouba, north of Mosul. The car reportedly belonged to Islamic State militants

That makes nearly 100 U.S. bombing runs in the past few weeks, and Secretary of Defense Chuck Hagel said that enabled Iraqi and Kurdish forces to fight the group — also known as ISIL — around two northern Iraqi cities.

So U.S. airstrikes were critical, but Hagel said the U.S. military is only part of the solution.

Embattled Yazidis Say They Are Now Enduring Atrocity No. 74

"The defeat of ISIL is not only going to come at the hands of airstrikes. It's bigger than just a military operation," he said.

That has left some analysts scratching their heads. If the Islamic State is such a threat and U.S. airstrikes are having success, then why not expand the scope of the airstrikes?

Ryan Crocker, former U.S. ambassador to Iraq, says the U.S. should target the Islamic State wherever they are, not just in northern Iraq.

"People are starting to get it here that they ... [are] really dangerous," Crocker says. "Since they erased the Iraq-Syria border, we should take them up on that and go after them in Iraq and Syria."

Officials say there are no plans to strike Islamic State targets in Syria, where the U.S. is already fighting a proxy war against the regime of Bashar Assad, but White House aide Ben Rhodes would not rule out bombing runs there.

The administration also has to decide whether to broaden its airstrikes inside Iraq. Retired Air Force Lt. Gen. David Deptula, who designed the air campaign for the 1991 Persian Gulf War, says to defeat the Islamic State, sharply increase airstrikes.

"This would involve not a handful of strikes per day, but hundreds of strike sorties per day," Deptula says.

He says the situation in Iraq is similar to the early days of the Afghanistan war, where U.S. air power was crucial in blunting advances of the Taliban, allowing the Northern Alliance forces to defeat them.

"We've been here before and I'm kind of amazed we haven't had more of a discussion with the kind of model I'm talking about," he says.

But Pentagon officials say they don't want that model. They don't want to become the Air Force for Iraq, because they say this fight is different and it is largely due to political missteps by Iraqis.

Competent Iraqi officers were dismissed, because of suspect loyalty. That led to a crumbling of the army in the face of the Islamic State advances. So now the U.S. is helping rebuild the Iraqi army.

Gen. Martin Dempsey, chairman of the Joint Chiefs, pointed to another reason for the Islamic State success: Those militant fighters found support from the Sunni populations in both Iraq and Syria, who were either marginalized or under attack by their own governments.

"ISIS will only truly be defeated when it's rejected by the 20 million disenfranchised [Sunnis who] happen to reside between Damascus and Baghdad," Dempsey says.

Until that happens, the U.S. strategy — despite its rhetoric — is simply to contain the Islamic State.