Accessibility links
Mystery Writer Finds Istanbul's Byzantine Past Hiding In Plain Sight In The Sultan of Byzantium, Turkish author Selcuk Altun takes his hero into forgotten corners of the city, where once-majestic monuments go unnoticed amid the bustle of daily life. 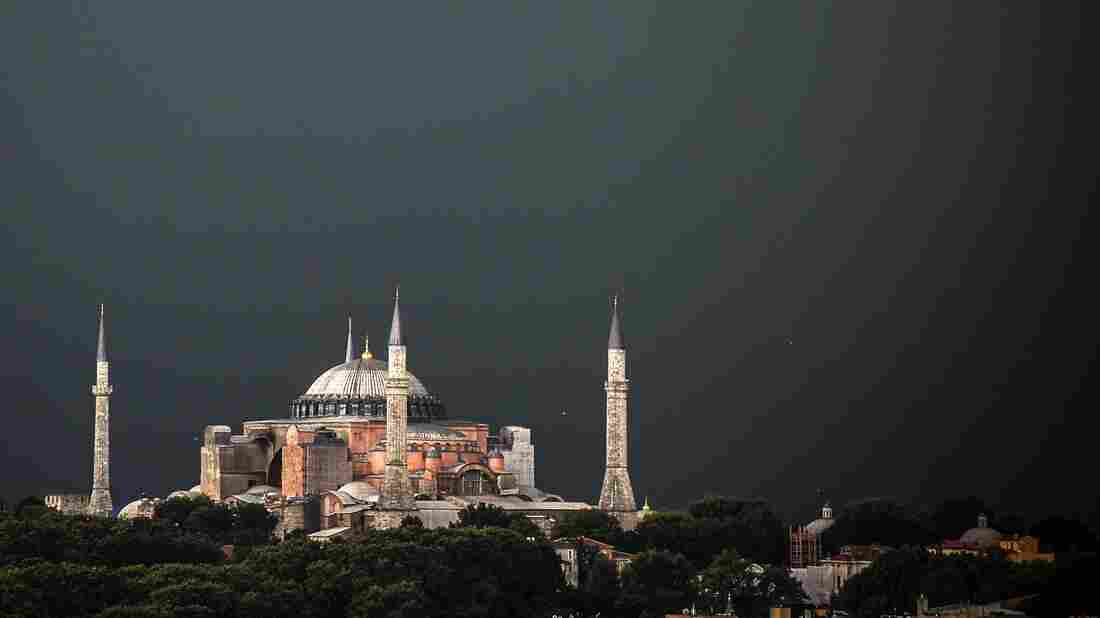 The Hagia Sophia is one of the city's most well-known Byzantine monuments, but it's also home to a lesser-known memorial: a plaque for the man who encouraged the Fourth Crusade's plundering of the city. Bulent Kilic/AFP/Getty Images hide caption 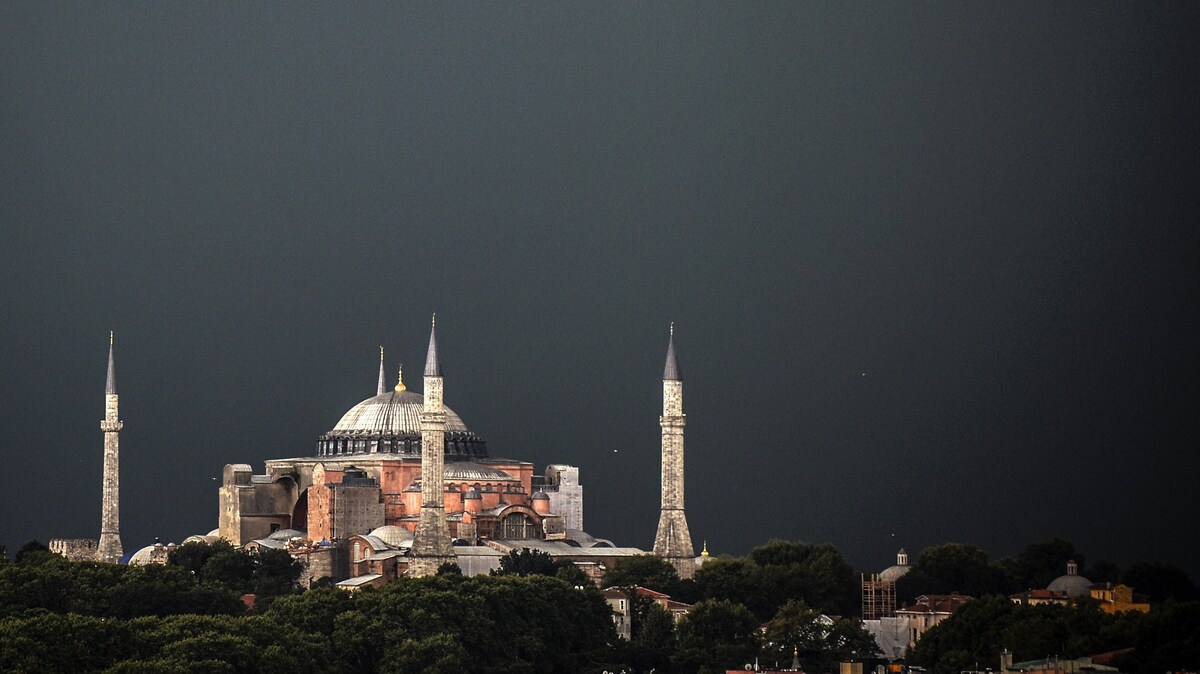 The Hagia Sophia is one of the city's most well-known Byzantine monuments, but it's also home to a lesser-known memorial: a plaque for the man who encouraged the Fourth Crusade's plundering of the city.

Istanbul makes an exotic first impression: Boat traffic on the Bosporus sends waves brushing up against the shores of both Europe and Asia as enormous mosques and monuments from previous empires stand guard. 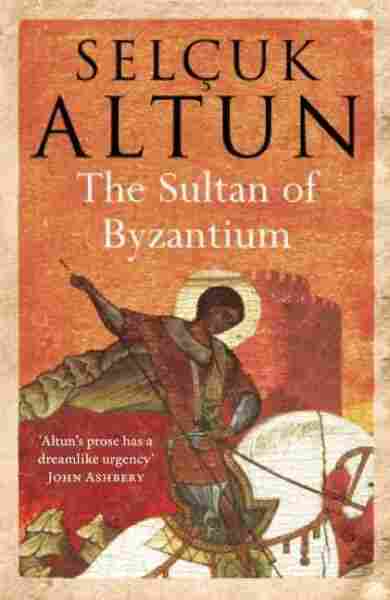 The Sultan of Byzantium

The city wears its history more openly than many, but that doesn't mean it's always easy to find. So writer Selcuk Altun spins mysteries that take his heroes into forgotten corners of the city, where once-majestic monuments go unnoticed amid the bustle of modern life.

Turkey's current Muslim leadership focuses primarily on the Ottoman Empire, but Altun's novel The Sultan of Byzantium is a homage to the Byzantines who ruled Istanbul — then Constantinople — for a millennium before the Ottomans came along.

It begins with a quiet academic living in Istanbul who receives a cryptic message that will change his life. It's from a mysterious organization that tells him he's a descendant of the last Byzantine emperor, Constantine Palaeologus, and it poses a series of tests to determine whether he's a worthy successor. Along the way, he discovers that other descendants, including his father, died under mysterious circumstances.

In the book, Altun sets the stage for an exploration of Istanbul's Byzantine past, an era he thinks deserves a lot more attention than it gets these days.

"In my opinion, Byzantium civilization is highly underrated," Altun says, "and not only underrated but also mis-[re]presented. Nowadays, when you say the word 'Byzantium' it's synonymous with grand-scale conspiracy and intrigue."

Altun says he wrote The Sultan of Byzantium as a kind of antidote to the thick, plot-heavy thrillers of writers like Dan Brown. In Altun's book, the main character considers Byzantine civilization the greatest in history, and the author still gets excited being around its monuments.

It's early on a weekday morning and commuter traffic is whizzing by, carrying passengers on cellphones who don't notice that they're traveling in a VIP lane of sorts: the Byzantine Golden Gate, reserved for victorious generals and visiting dignitaries. These walls were built in the fifth century to protect Byzantines, but by the Middle Ages they were also protecting medieval Europe from rapacious Eastern armies. 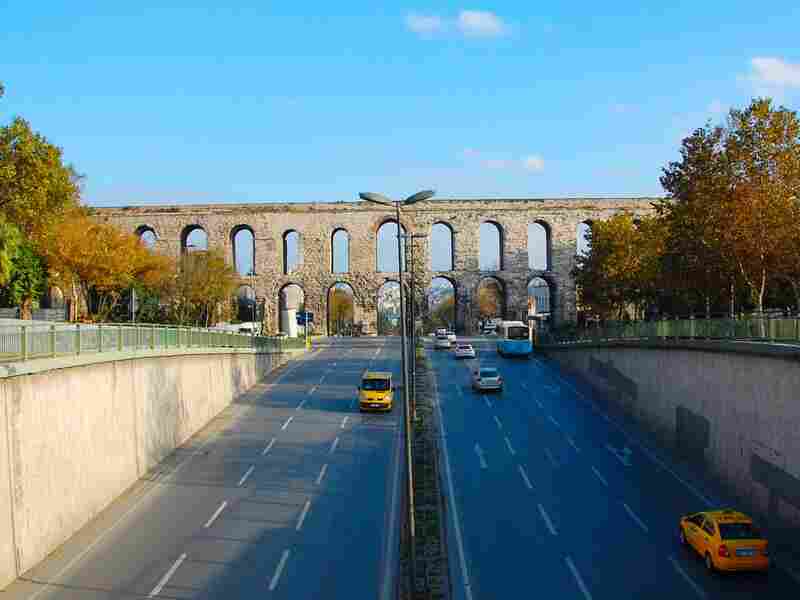 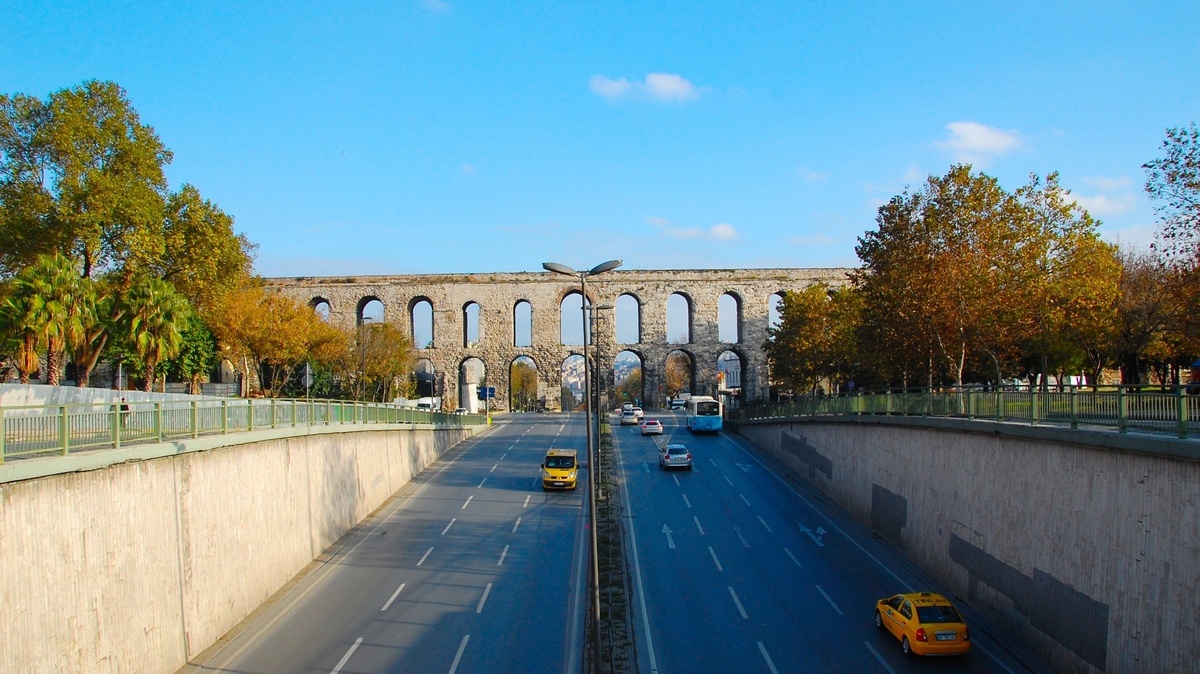 Traffic passes under Istanbul's ancient Valens Aqueduct, which once carried water to the city's royal cisterns.

Altun points to differences in the limestone where later stone masons carried out renovations.

From there we move inland to a giant monument that, to motorists passing through its arches, must look like an old bridge — it's actually the ancient, 90-foot-high Valens Aqueduct, which once brought water to the royal cisterns.

"When Greeks and Romans started coming and settling in this city," Altun explains, "the city had a major problem: The nearest source of water was called Belgrade Forest, 25 kilometers [about 15.5 miles] west of [the] city. So they built these huge water bridges, called aqueducts. And to me it has a special meaning: You are coexisting with history."

To reach our next destination, we climb steep, winding streets alongside creaking bicycle carts. We're looking for Tekfur Palace, home of Palaeologus, the last Byzantine emperor. It's tucked away amid modest apartment blocks in a working-class neighborhood.

Altun says he can't blame Turks for not recognizing the amazing history all around them; after all, they aren't taught to appreciate it. 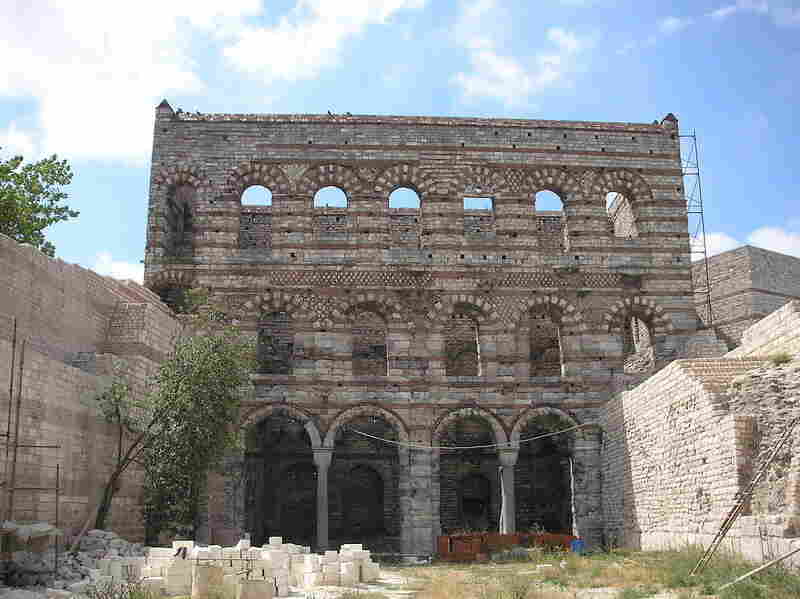 Tekfur Palace is also known as the Palace of Phorphyrogenitus, or "born to the purple" in Greek. It was home to the last Byzantine emperor. Gryffindor/Wikimedia Commons hide caption 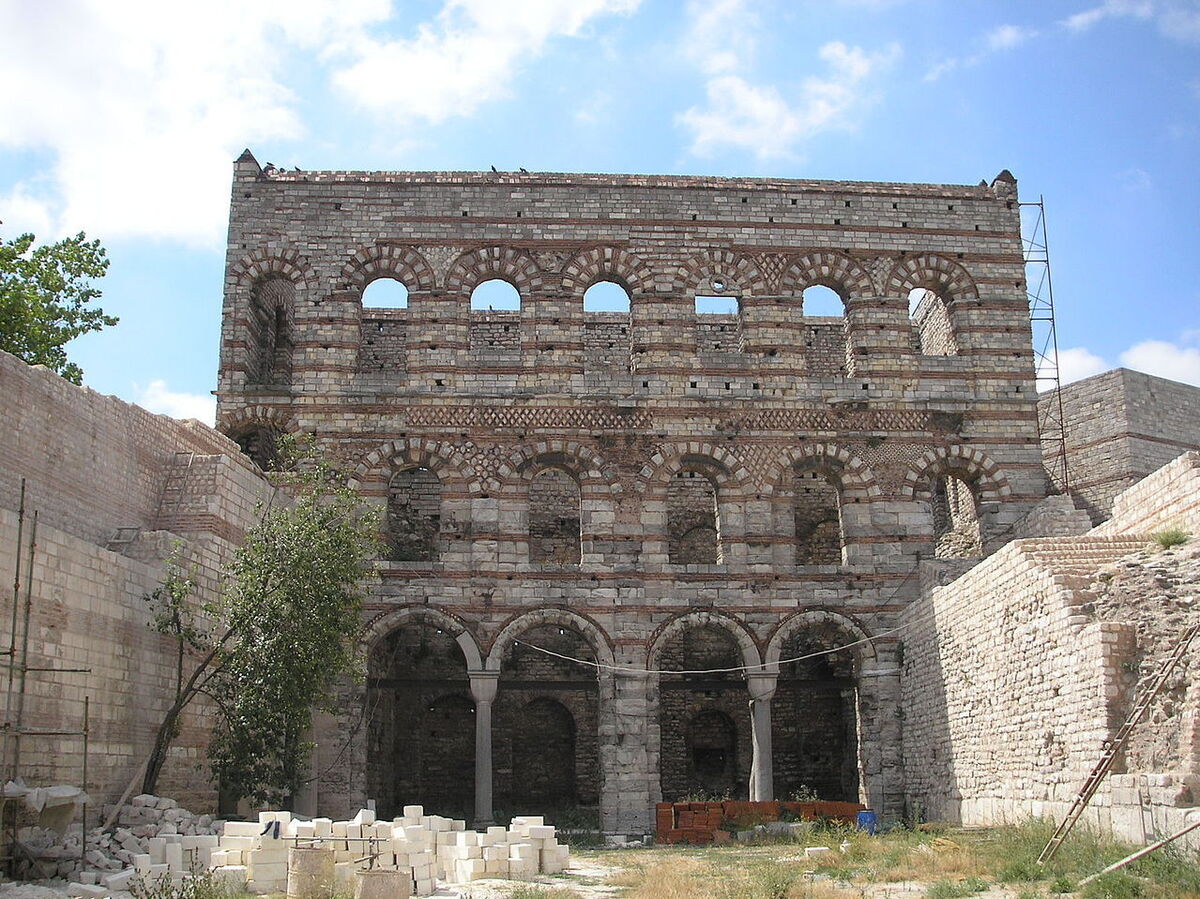 Tekfur Palace is also known as the Palace of Phorphyrogenitus, or "born to the purple" in Greek. It was home to the last Byzantine emperor.

The Tekfur Palace was saved by its very obscurity — rampaging crusaders missed it when they sacked the city in the 13th century. In the novel, this is where Altun's narrator discovers who has been putting his life in danger throughout the book.

Our next stop is by far the most popular Byzantine site in Istanbul. Known as the "Church of Holy Wisdom," Hagia Sophia was an astonishing architectural achievement for the sixth century. Altun says a thousand years passed before a bigger church was built in Spain.

As massive lines of tourists fill the plaza outside the church, Altun pauses to describe what he calls "the Mona Lisa of mosaics" — an image of Jesus, Mary and John the Baptist in the church's upper gallery. In the book, this is where his hero discovers the final crusader insult to the venerable church: Across from the glorious mosaic lies a marker for the grave of a Venetian doge named Dandolo.

"He was the one who provoked and motivated the mercenaries of [the] Fourth Crusade to plunder the city," Altun says. "When he died, he was 100 or 101 years old, and there is a plaque saying, 'Here is Dandolo.' "

The plaque remains, but historians say the bones were probably removed after the Ottomans conquered the city and turned the church into a mosque. It's now a museum, but some Turkish officials want to make it a mosque again. Altun hopes that won't happen.

A retired bank executive, Altun calls himself a reader and a book lover more than a writer. All proceeds from his books go to a scholarship fund for literature students. He hopes his modest mystery will give readers an urge to know more about a once-grand empire hiding in plain sight in modern-day Istanbul.

Some Turkish Churches Get Makeovers — As Mosques

The audio of this story, as did a previous Web version, incorrectly identifies the last Byzantine emperor as Michael Palaeologus. In fact, the last emperor was Constantine Palaeologus.