Accessibility links
'Lock In': A Cop Story For Robot Lovers, A Robot Story For Cop Lovers John Scalzi's new Lock In is a successful genre mashup that balances the needs of a police procedural (dead body, damaged detective) with those of a science fiction yarn (hard-core world building). 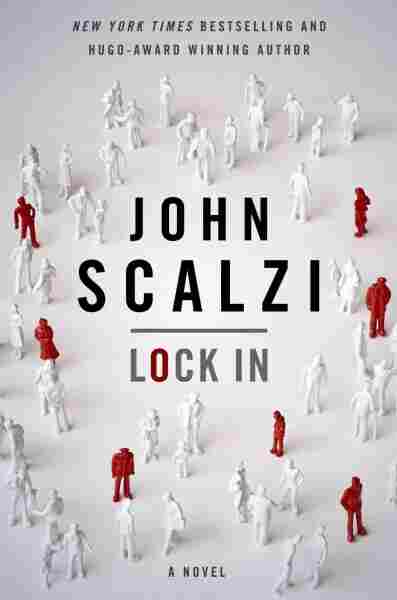 When I'm reading for fun and not sitting up in my ivory tower reviewing books for NPR, I generally gravitate toward two kinds of stories: science fiction and procedurals. In both cases, I like my books grimy and lived-in. I have no love for utopias, shiny spaceships where nothing is ever broken, or Teflon detectives who don't come with baggage. If there isn't a bullet hole in someone or something before the story starts, there'd better be one put there within the first couple of pages.

But crossing those streams — creating a science fiction procedural — is almost always a bad idea. By nature, your garden-variety procedural has to start with a bang that drops you not into the world, but into the middle of a mystery. And in science fiction, all but the best (or trickiest) authors have to front-load their stories with exposition and world-building that roots you in a place, but not necessarily in the action. Thus, the conundrum: Right from page one, the author either has to short the action or short the world. So it's a good thing that John Scalzi seems to have missed that memo.

Lock In is a cop story first. It begins with a neat and effective free fall into the near-future world in which the story is set, laying out in dry, almost academic terms the history of Haden's Syndrome, a global, meningitis-like pandemic that, in addition to killing lots of people, also left a certain percentage of them completely paralyzed. This paralysis is called "lock in."

The world has been irrevocably altered by it — socially, politically, culturally and technologically. Those suffering from lock in get around using robots or by renting time in the bodies of nonparalyzed Haden's survivors called integrators. Right now (or in the "right now" of the story, anyway), the United States is on the brink of another massive upheaval, as generous government subsidies to Haden's sufferers are about to end. And Scalzi knocks all this out in a tidy, seven-paragraph frontispiece, complete with convenient bolded highlights, attributed to the (fictional) HighSchoolCheatSheet.com — a brilliant way to root his fiction in a believable reality.

Then the book actually starts. There is blood, a body, a couch pushed out a hotel room window from a high floor. There is Chris Shane, rich son of a real estate bajillionaire (and a locked in Haden's survivor) reporting for his second day as a rookie FBI agent and meeting for the first time with his partner, a veteran investigator named Leslie Vann who comes with enough baggage to satisfy Dashiell Hammett. She drinks, she smokes, she sleeps around. She's got tragedy baking off her like radiation, and with that, Scalzi hits all the required tropes like checking items off a form — a body, a mystery, a damaged investigator, even a robot partner (because Agent Shane spends almost all his page time tooling around in, and repeatedly destroying, a variety of robot bodies).

Once he's gotten past the tricky part of building a near-future world and putting a dead body in it without getting bogged down in the details of either, the rest is all cake and hand grenades.

The balance established in the first pages of Lock In serves Scalzi well throughout most of the rest of the book. He moves the story along from clue to clue and suspect to suspect, dropping out of the flow only occasionally to build neat little additions to the world he's playing in. There's an expository dinner scene at the home of Agent Shane's rich parents that drags on a bit (until it's interrupted by something blowing up), and a distractingly heavy use of coincidence. (What? You mean the perfect person to move the plot along just happens to be Agent Shane's new roommate? What are the odds?) But seriously, by the time any of this matters, the bodies are stacking up, there are ninjas leaping out of the kitchen, and Scalzi has the pot boiling in exactly the way you're supposed to in a proper procedural.

And that's not to say it's formulaic, but just that he knows the book he's writing. Once he's gotten past the tricky part of building a near-future world and putting a dead body in it without getting bogged down in the details of either, the rest is all cake and hand grenades. It's about laying down the pieces for an end game — the murder solved, the bad guys brought to justice, all the things you expect.

Which is, of course, where Scalzi plays his second neat trick: Pulling off a half-twist ending that couldn't work anywhere but in this world and yet, at the same time, is so perfectly cop-story-esque that it could've been ripped right from a 1940s pulp novel. It is satisfying in that it's the resolution you expect, but it catches a spark from the postmodern sense that Scalzi and all his characters seem to know precisely what they're doing. They understand that the story is coming to a close, too, and can't help being proud of themselves for the clever job they've done.

Read an excerpt of Lock in