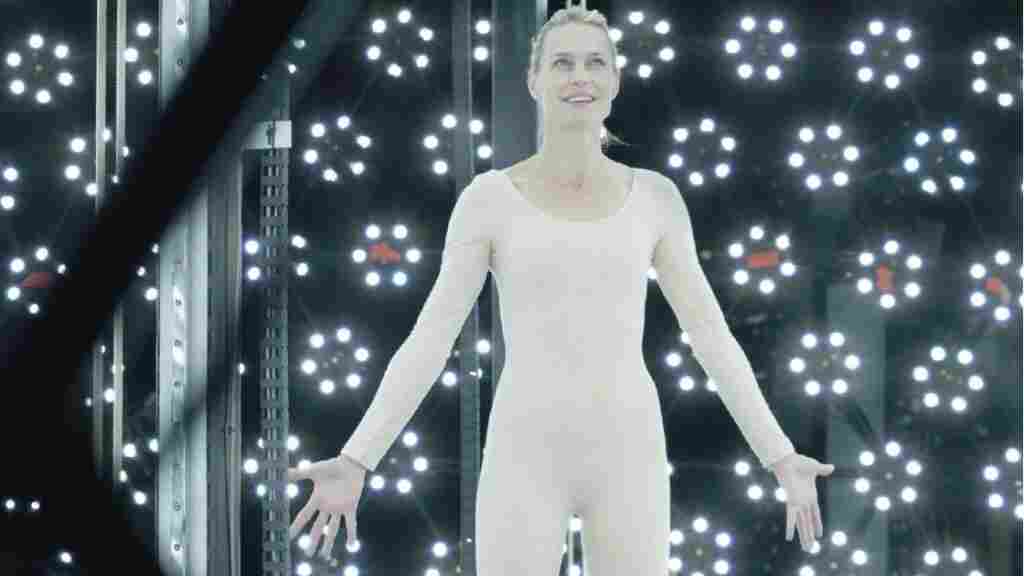 Robin Wright plays a version of herself in The Congress. Courtesy of Drafthouse Films hide caption 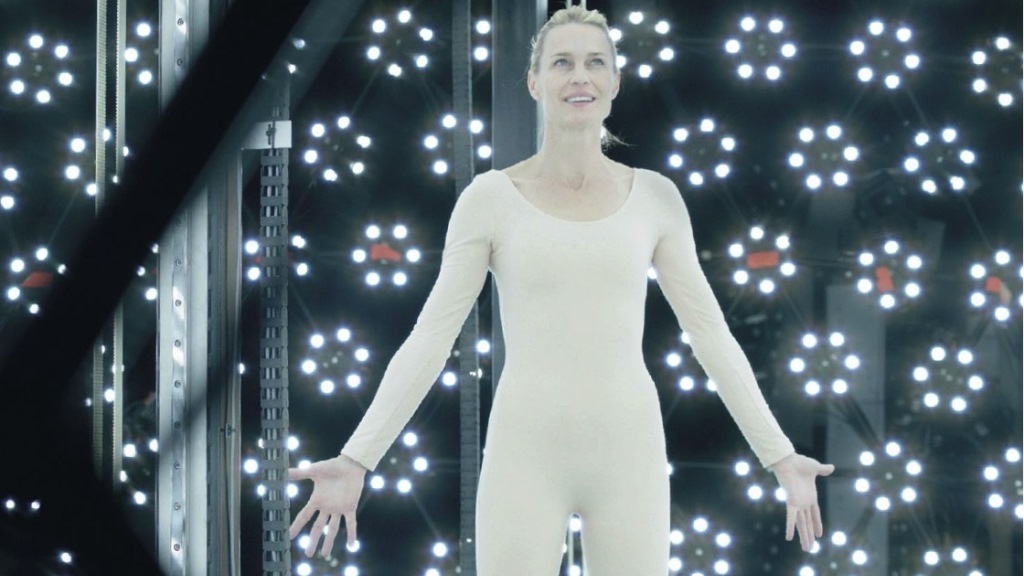 Robin Wright plays a version of herself in The Congress.

The most interesting but remarkably understated aspect of The Congress, a half-live-action, half-animated trip of a film from Israeli director Ari Folman, is the increasing power accrued by the fake movie studio in its story, Miramount. When the film opens, Miramount is but a moviemaking venture, as you'd expect; by the end, it's the dominant power structure behind a futuristic dystopian society.

The path to such dominance begins with Miramount's president, Jeff Green (Danny Huston), convincing the world's actors to accept the future of cinema: scanning, a process by which performers are digitized completely so that Miramount can put them in whatever projects it desires while eschewing the fussing and complaining that come with using real-life actors.

One of the actresses being asked to sign away her likeness for the next 20 years is Robin Wright (loosely based on and, of course, played by the real Robin Wright). At 44, Robin has stopped getting the roles that propelled her to fame early in her career. And with a young son, Aaron (Kodi Smit-McPhee), suffering from a disease that's slowly making him go blind and deaf, she has also long lost the desire to spend much time on sets.

Still, Robin resists the studio's offer to create a forever young, digital version of her. She gives in only after getting whittled down by her manager, Al (Harvey Keitel), who argues that scanning doesn't change much about the industry and might even be good for women in general. Al asks Robin to consider "all the women who were face-lifted to death," as if progress means letting women keep their faces in exchange for losing their careers.

Al's facile pseudo-feminism aside, The Congress does begin as a promising story not only about women and aging in Hollywood but also the future of film in general. Working off of Stanislaw Lem's novel The Futurological Congress, Folman's setup recalls a time when actors were exclusively signed to specific Hollywood studios, the film's vision of the future thus dovetailing with the same-as-it-ever-was mentality that Al pushes on Robin. And as Folman shows us cinematographers being reduced to scanning actors rather than shooting movies, a broader concern over the digitization of cinema reveals itself as well. 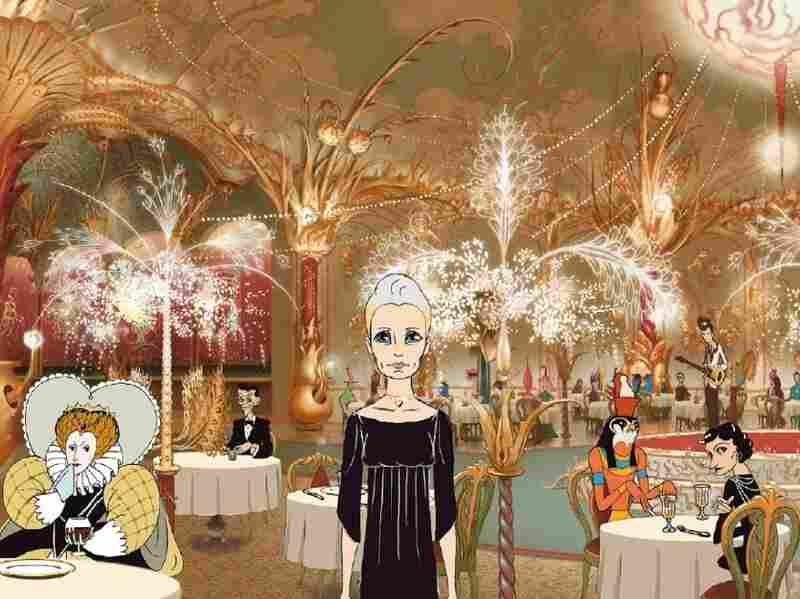 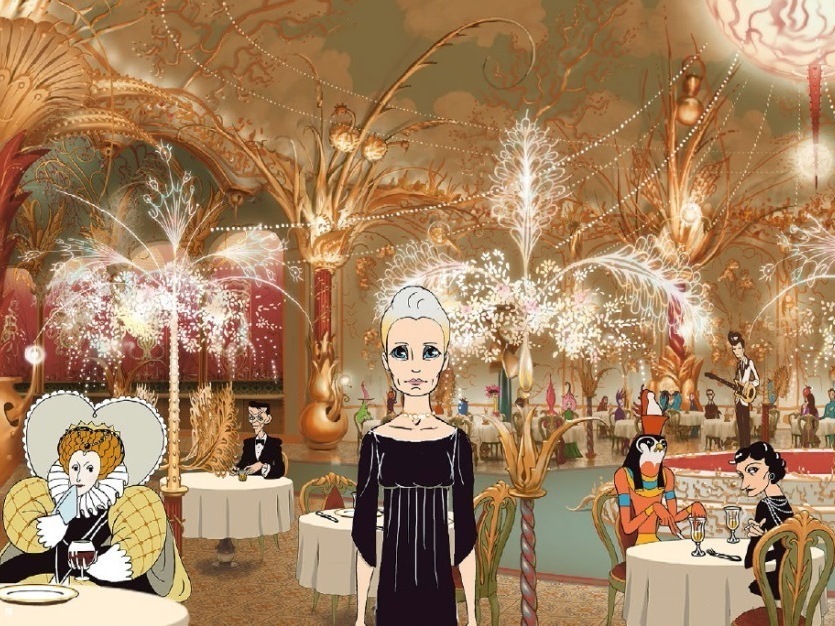 That, at least, is the first 45 minutes. After Robin gets scanned, the film jumps forward 20 years, shifts into animation, and descends into ever more far-fetched fantasy scenarios. First, Robin attends the Futurological Congress organized by Miramount and hosted at a hotel that requires everyone to transform into animated versions of themselves during their stay. Robin arrives to sign an extension on her contract and ultimately learns of Miramount's latest cinematic revolution: a project to make movie stars completely consumable by allowing fans to drink, eat and even transform themselves into the bodily forms of their favorite celebrities.

That idea sits for a few scenes, until a rebellion ignites in the hotel, at which point Robin meets an animator called Dylan (voiced by Jon Hamm) who leads her to safety. That twist doesn't last for long either. Soon after, Robin gets cryogenically frozen for yet another 20 years. Like a bad thriller that introduces continuously higher threat levels to keep your attention (first the city, then the country, then the world!), The Congress keeps leaping to loosely connected and increasingly high-concept alternate realities.

Folman's previous movie, Waltz With Bashir, was also animated, but its rotoscope-like images were always grounded in a vision of the real world, even as they embellished it to best capture the fraught psychological state of the Israeli soldiers at the heart of its story. In The Congress, Folman uses a more classic style of animation and gets sidetracked by the complete freedom it gives him to construct whatever fanciful idea comes to his mind. While always detailed in its visual execution, each new aspect of the film's world remains conceptually hollow, growing ultimately into a Matrix-style allegory for the nature of truth that, again, debates whether a life of blissful ignorance is better than living with the knowledge of what the world is really like.

Meanwhile, beyond its concepts, The Congress contains only a thin storyline that follows Robin's attempts to reconnect with Aaron after she enters the congress' animated world. The far more compelling through line is the consistent presence of Miramount, since it helps connect each segment of the movie back to Folman's initial interest in the future of filmmaking. Cinema, it turns out, is not lurching toward its demise but will soon reign completely over all existence. It will not be dictators or bureaucrats who construct our dystopian futures. It will be the movie studios. Unfortunately, if perhaps not surprisingly, that's a prospect less terrifying than dull.