Accessibility links
Movie Review: 'The November Man' | Pierce Brosnan has left James Bond behind, but he struggles for his footing in an action thriller he himself fought hard to bring to the screen. 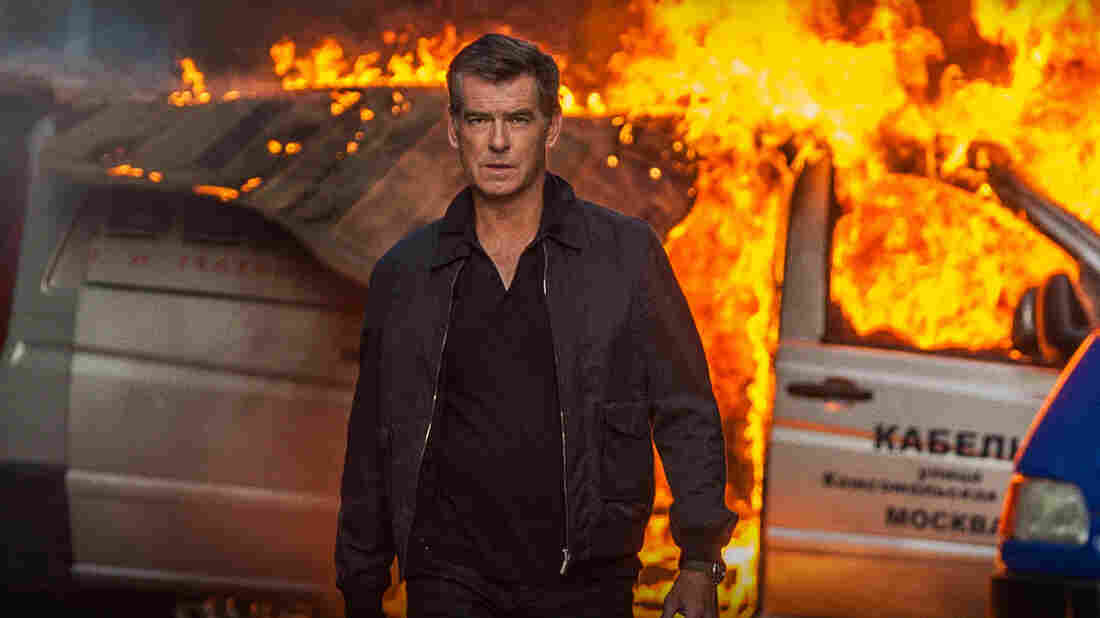 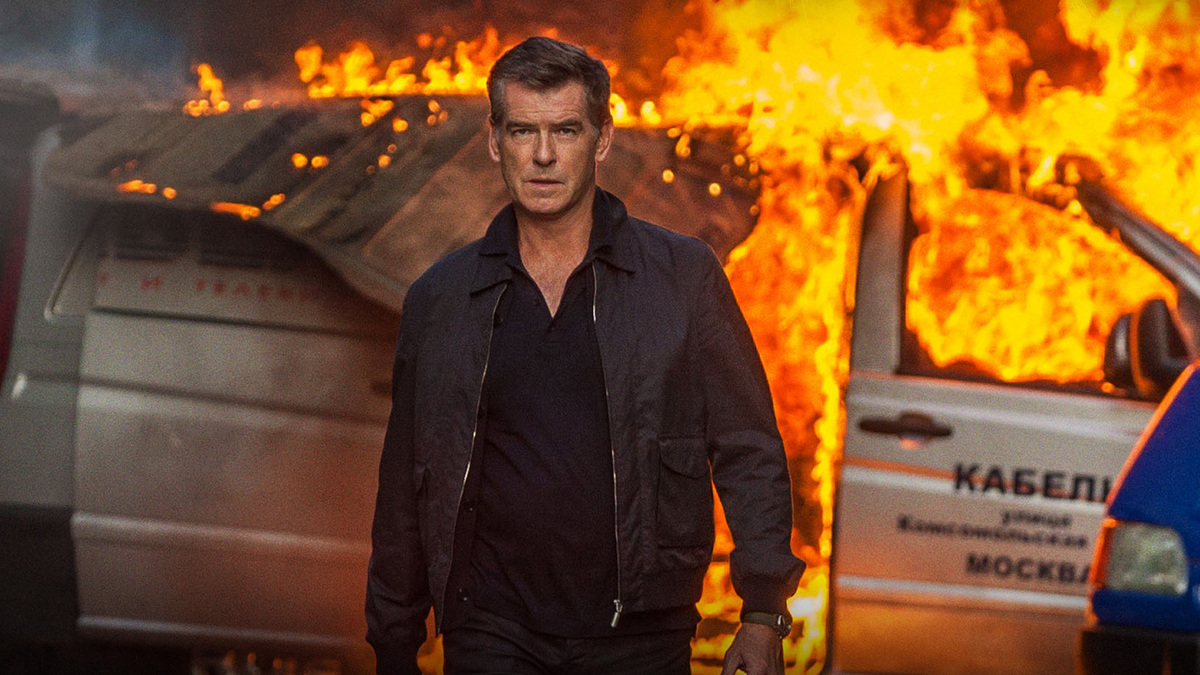 Pierce Brosnan plays an ex-CIA agent in The November Man.

Sean Connery was 53 when he downed his last vodka martini as James Bond (though he'd previously walked away from the role and been lured back twice). Roger Moore was 57 at the time of his last mission on Her Majesty's Secret Service (though he didn't look a day over 90). Pierce Brosnan was a spry 49 in his final Bonding session, and his departure was bittersweet: He'd started later than he'd wanted, almost a decade after he was first announced as Moore's successor in the mid-80s. But then NBC uncanceled Remington Steele and called Brosnan back on the last day of their option to renew his contract, forcing him to bow out.

Brosnan finally debuted as James Bond in 1995. And after he'd restored the franchise to commercial prominence, producers Michael G. Wilson and Barbara Broccoli gave him a gentle shove out that leather-upholstered door following 2002's cruddy Die Another Day — even though he'd been very public about his desire to stay on, and even though all 004 of his 007s had been huge hits.

The thing is, Brosnan was always more interesting when Bond-adjacent than when he actually wore that tux. As he's since admitted, he never quite figured out how to make his most famous role his own. But in contemporaneous pictures — the remake of The Thomas Crown Affair, wherein he played a corporate raider who steals art for kicks; The Tailor of Panama, which cast him as, er, a womanizing MI6 agent, but one who is corrupt and amoral; The Matador, wherein his aging assassin character suffers a crisis of conscience — Brosnan was terrific. Each of those films got an extra splash of juice from the fact that they starred James Bond, doing things Bond would never be allowed to do. (Daniel Craig's more volatile and compelling Bond might, but we hadn't met him yet.)

So The November Man, wherein James Bond Emeritus plays a war-weary, stubbornly Irish-accented CIA badass with A Very Particular Set of Skills called back in for One Last Mission, ought be a slam dunk. But like Brosnan's tenure as 007, it's too much an amalgamation of too many other things to develop its own identity. It's a serviceable, pleasingly CGI-unenhanced run-and-gun flick I will find on Encore Action after midnight a year-and-a-half from now and watch for 17 minutes before remembering I've already seen it. But it wouldn't feel any different if it had starred Liam Neeson or Denzel Washington or any other member of the AARP-Eligible Butt-Kickers' Club.

This isn't just disappointing, it's odd. Brosnan — gunmetal haired and still dashing at 61 — also produced the movie. He's been angling for years to launch a series based on Chicago newspaperman Bill Granger's novels about CIA problem-solver Peter Devereaux. It's the same position producer-star Tom Cruise is in with his on-the-bubble series derived from Lee Child's Jack Reacher novels. But the first of those — I'm afraid it was called Jack Reacher — figured out how to make a comic asset of its star's public persona; in Cruise's case, the occasional tendency to come off as a sinewy wind-up toy without a doubt, or a thought, in his head.

The November Man has nothing like that level of self-awareness. Adapted by Michael Finch and Karl Gajdusek from Granger's novel There Are No Spies (rather than from his novel The November Man, confusingly), this bloody, stabby yarn-ball is convoluted in its particulars even as it dutifully kneels before all the stations of the spy-flick cross: After one of his operations results in a tragic loss of civilian life (1); Devereaux enjoys an idyllic retirement that he is FIVE YEARS LATER coaxed out of for One Last Mission (2); whereupon he is betrayed by those regime-destabilizing, puppy-kicking jerks, the CIA (3); and must battle the reckless, hunky padawan he once trained (4); until his own betrayers are themselves betrayed in a dizzying series of reversals (5, 11, 23, 47); and someone experiences an unconvincing moral awakening so the movie can end (Appendix J-21).

Set and shot primarily in Serbia, the movie goes for some of that John le Carre existential Euro-chill that the Bourne movies sprinkled over their chase-flick chassis, but without enough conviction to let Devereaux lose a fight or make a bad call once in a while. Experience and scruples always triumph over youth and reflexes in movies like these, because that's what we, the people, want to believe.

The few instances where The November Man veers away from expectation — like a scene wherein Devereaux, the guy we're supposed to be rooting for, deliberately inflicts a gruesome injury upon an innocent woman to cover his escape — are briefly titillating but don't square with the movie's loud but demonstrably false claim that Devereaux is any more enlightened or peace-loving than the people trying to kill him. Elsewhere, the movie subverts expectation in ways that are frustrating rather than fresh. Bosnian gymnast Amila Terzimehic is on hand as a heavy, and we see her limber up before going to hunt her target, teasing us for an epic hand-to-hand melee that never arrives.

Although Ian Fleming's Bond novels were considered shocking in their day for their frank depiction of both torture and sex as tools of the espionage trade, the Bond movies have only obliquely circled the idea that in-the-field espionage is in fact a lonely, soul-obliterating job that usually ends in some sequence of substance abuse, paranoia, insanity and violent death. But whenever The November Man gets a chance to show us the dirt that's stained Devereaux's soul, it chooses instead to reassure us he's The Best There Is at What He Does (Just Like Everyone Else).

An operator as cunning as Devereaux supposedly is would probably just as soon avoid all these dust-ups with other agency guys who're presumably as highly trained as he but 30 years younger. Actually, Luke Bracey, the Australian let's-call-him-an-actor who plays Devereaux's pupil-turned-pursuer, was born the year Brosnan turned 36. One look at him and you'll assume he is destined to play Keanu Reeves' old part in a blasphemous and unclean remake of Point Break -- which turns out to be 100 percent correct.

The MacGuffin this time is a person, a refugee who has evidence that the current front-runner for the Russian presidency committed atrocities during the second Chechen war. Olga Kurylenko, one of the few "Bond girls" to make it to the end of her movie (2008's Quantum of Solace) alive and without having had sex with Bond, plays Alice Fournier, the mysterious refugee's caseworker with an organization that aids victims of sex-trafficking and torture.

Kurylenko is given more to do than women in this genre usually are. There's one extraordinary sequence in the middle of this middling thriller wherein Alice recalls her own sexual assault: The attack is seen only from her point of view, without nudity or anything else that might make the moment feel exploitative or anything other than revolting. The movie takes away her agency and requires her to be rescued right afterward, but for a minute there, there was a flicker of emotional intelligence.

Want to hear something depressing? The climax involves Alice frantically composing an email to "editor@nytimes.com" detailing the Russian candidate's heinous crimes. The film really does pump us full of the notion that if she can just hit SEND before that assassin gets her, evil will be exposed and punished and mothers will smell the heads of newborn babes and flowers will bloom and we'll be OK. I wish I didn't know that my best friend, who happens to be the person who reads all those unsolicited submissions at a different paper, gets approximately 40 emails alleging heinous crimes by would-be world leaders per hour.

Donaldson is an old hand at popcorn thrillers who previously directed Brosnan in one of 1997's competing volcano movies, Dante's Peak. (The other one, presumably more elliptical and pretentious, was called Volcano.) He's best known for No Way Out, the 1987 Kevin-Costner-and-Sean-Young-do-it-in-a-limo-circling-the-National-Mall romantic thriller that provided some of the most-cherished Washington, D.C., geography gaffes in cinema history. But it's an entertaining picture, boasting anachronisms both charming (the Pentagon supercomputer that takes 48 hours to reconstruct a damaged photograph) and unfortunate (Will Patton's performance as an aide to Gene Hackman's senator whose closeted gayness drives him to murder and suicide).

Patton has a small part as a CIA creep in The November Man, too. But Costner is the guy we miss. Hey, what're you gonna do? He's 59 years old. His days as a leading man in action thrillers are over.