Accessibility links
Review: Death Blues, 'Ensemble' Jon Mueller is thinking about death. It sounds like a hammer hitting an acoustic guitar. William Ryan Fritch joins the Volcano Choir drummer for a blown-out, hyper-real orchestra of the self. 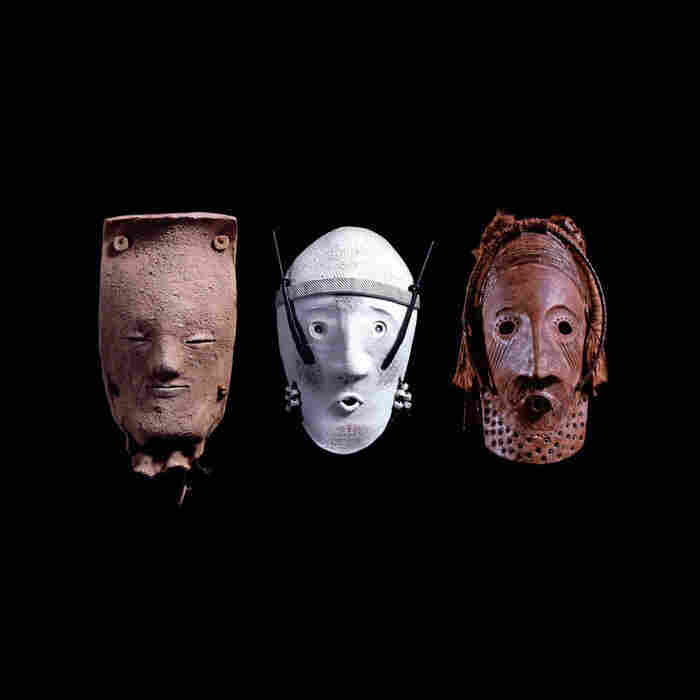 Jon Mueller is thinking about death. It sounds like a hammer hitting an acoustic guitar.

"What happens when we thoroughly hold and understand that our lives are finite? How does this understanding of our end shape our present? How do we become more 'present'?" Since 2011, the percussionist and composer Jon Mueller (Collections of Colonies of Bees, Pele) has been asking these fundamental questions as Death Blues, a multi-disciplinary project stretched over essays, performances, the visual arts and albums. The range of the music has been exploratory and — to those may only know Mueller's work through Volcano Choir — at times challenging, but then so is the range of questions he asks.

If Death Blues was the meditative inception, Here the manic mantra and Non-fiction the explosive catharsis, then Ensemble is the blown-out, hyper-real orchestra of the self. Over the course of two years, film composer and multi-instrumentalist William Ryan Fritch worked with Mueller to bring out new fantastical colors and shapes in these pieces, which still center on the monotonic yet soul-awakening thwack of the hammered acoustic guitar.

Fritch's arrangements feel like something out of a Hayao Miyazaki film — a lost era that never existed or a familiar, recurring dream. After the crash of drums and cathedral-shattering voices, "Consonance" is built upon a ramshackle string melody that threatens to buckle under heavy bliss. "Participant," by contrast, is playful in its lilting piano and traditional Chinese folk strings, driven forward by Mueller's declarative drums and Craig Feazel's wandering pedal steel. Later, "Unseen" is the funeral-march cabaret existing somewhere between Tom Waits and Godspeed You! Black Emperor, while "Obtain" speeds up the tempo to an ecstatic gallop. At times, the sublime contrast of melody and atonality recalls Angela Morley's (née Wally Stott) work on the first four Scott Walker solo albums ("Reentry") or Jim O'Rourke's busy yet thoughtful classical Americana album from 2009, The Visitor ("Entrainment"). Ensemble paints across culture and time, reaching upward as it looks inward.

The record comes packaged in a large-format book adorned by Lillian Rammel's mask sculptures. The masks play into Mueller's main theme for Ensemble: "layers within perception," or how we reflect ourselves to the world, even and especially to ourselves. He commissioned essays from friends and deep thinkers (artist and poet Stacy Blint, musician and artist Faith Coloccia, artist Chris Koelle and musician Tom Lecky among them) about the events in their lives that still carry weight. It's in keeping with the idea of mindfulness, being aware of what David Ravel describes — in his heartbreaking story about the death of his father, then his wife — as the "intangible yet ineluctable truth [that] revivifies our present and our presence." In a time where album artwork is reduced to a thumbnail and liner notes to a pdf file no one reads, Death Blues' Ensemble feels vital as a complex experience you touch, live in, and meditate on.