Accessibility links
Amazon's German Workers Push For Higher Wages, Union Contract Amazon has thousands of workers in Germany and many are unhappy that they're classified as lower-paid logistics workers. The company says they're well compensated for unskilled labor. 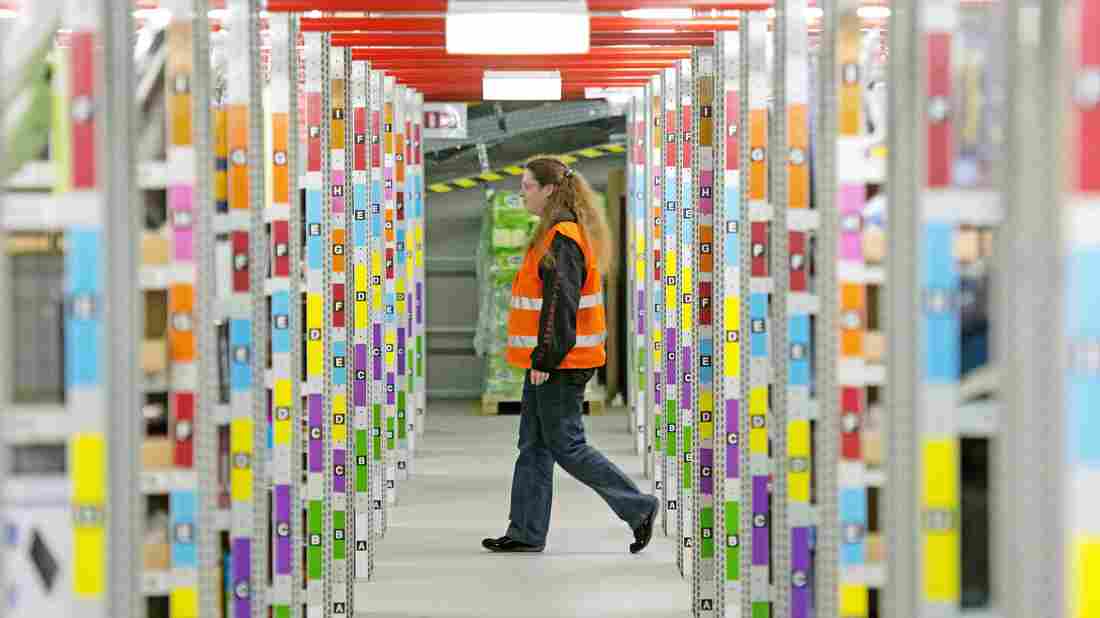 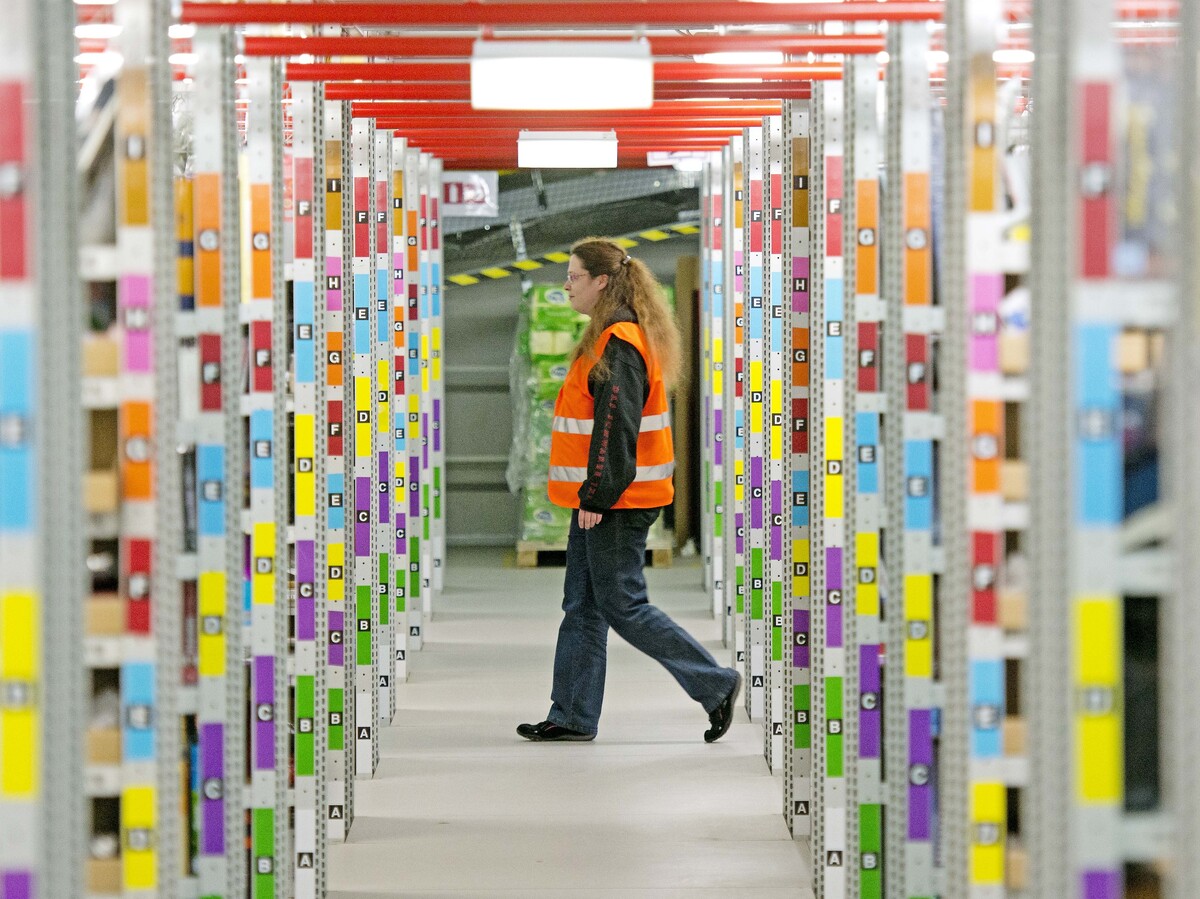 An employee walks in an Amazon distribution center in Leipzig, Germany, in March.

Only about 11 percent of U.S. workers are in unions — down from 20 percent just three decades ago. It's different in Germany, where most workers are covered by collective bargaining.

That cultural difference is causing a clash between Amazon, the Seattle-based online retail giant, and its German workers.

Bad Hersfeld is best known as a picturesque festival and spa town in central Germany. But it's also home to two Amazon fulfillment centers that employ more than 3,000 people.

One of those workers is Nancy Becker. She came to Germany as an exchange student from the United States, married a German man and stayed. Becker is now 61, and she has worked at the Amazon fulfillment center for 13 years. 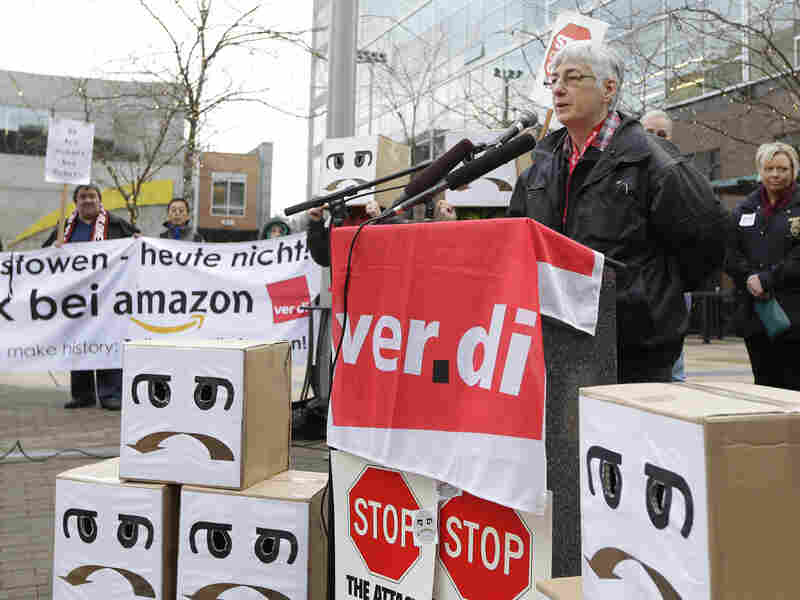 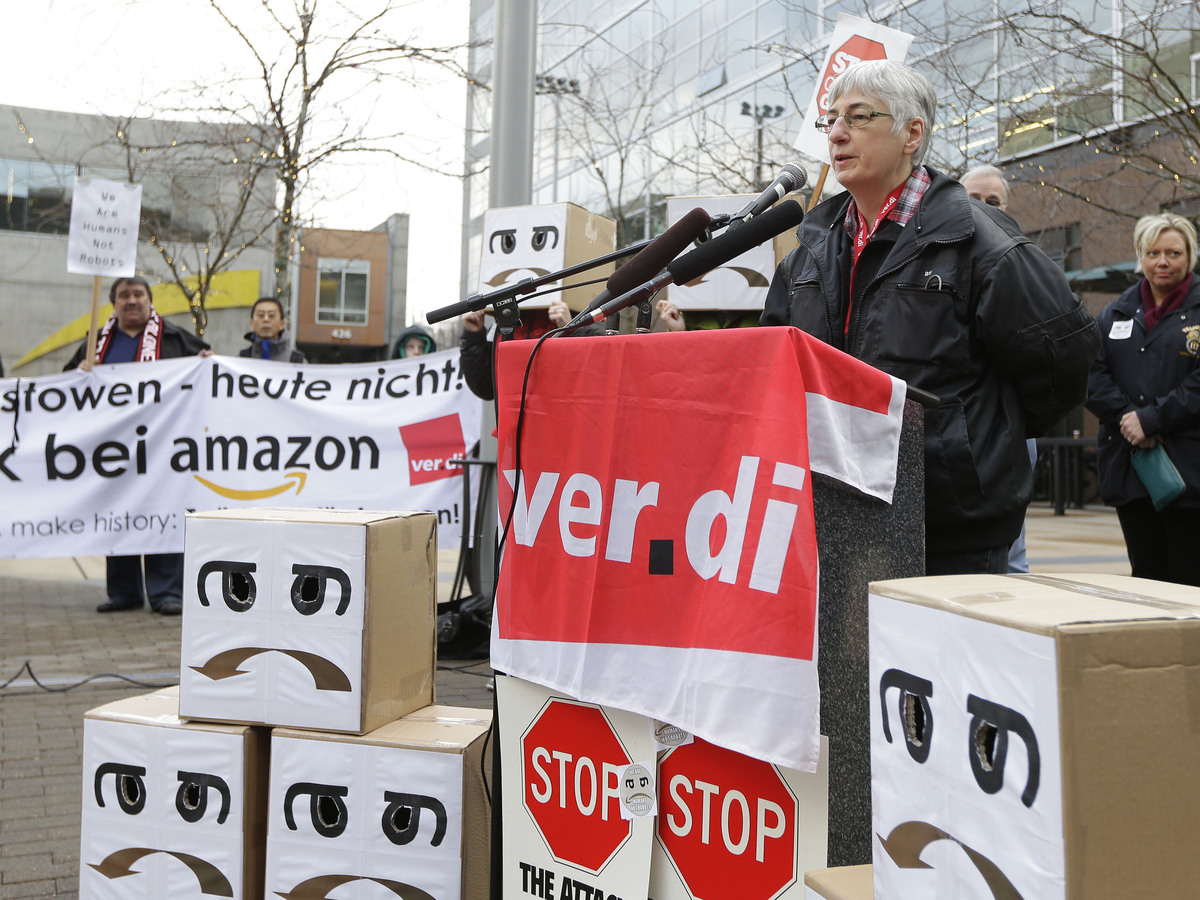 Nancy Becker, an Amazon employee in Bad Hersfeld, Germany, speaks at a protest rally outside the company's headquarters in Seattle in December.

"It wasn't that hard work," Becker says. "I was a picker at the time. And we didn't have that much stress. As Amazon grew in Germany, then the pressure on the people here — yeah, do this, do more, more, more — kept growing year for year for year."

Along with more demands, Amazon did offer more. Workers in Bad Hersfeld get 28 days of paid vacation a year; that's four more paid vacation days than required by law.

But Becker is unhappy because she and the other workers are classified as logistic workers. They want to be classified as retail workers. That pays more. In Germany, virtually all salaries are determined by these job classifications.

Amazon officials declined to speak on the record. But in a written statement, the company said its German employees at fulfillment centers primarily load and unload trucks and stock shelves. The company says those tasks are vastly different from the jobs done within a retail store.

But there's a bigger issue here, according to Simon Habermaas from Verdi, the union. He says it can't even get a contract from Amazon.

"That's for us not acceptable," he says. "And because of that, the fight with Amazon is a big fight for the successful German way of industrial relations."

Since 2013, hundreds of the Amazon workers in Bad Hersfeld have conducted a series of short strikes, each lasting one to three days.

According to Amazon, these strikes don't have an impact on customers. Nancy Becker disputes this.

"Amazon claims that they don't. But people will say, 'Well, I ordered something or another. Instead of being delivered the next day, all of a sudden it's delivered four days later.' But Amazon claims it has no effect. But it does," Becker says.

So have the mini-strikes won anything for the Amazon workers?

Ralf Kleber, who runs Amazon operations in Germany, told the Reuters news service that Amazon is a fair employer and that his workers are well-compensated for unskilled labor.

Becker bristles at the suggestion. "I'd like to see them actually do the work that a regular employee does — physical work when you're walking 10, 12, 15 kilometers every day, day in and day out," she says.

Not all workers at Amazon's German fulfillment centers have participated in the strikes. Amazon says more than 1,000 of its workers signed a petition in support of the company.

So if she feels it's so unfair to work at Amazon, why does Becker stay?

Becker says the strikes will continue at Amazon facilities in Germany.