Accessibility links
Showboat Casino Closes After 27 Years On Atlantic City Boardwalk It was one of three casinos closing within the next two weeks as Atlantic City deals with the impact of increasing competition from casinos in neighboring states. 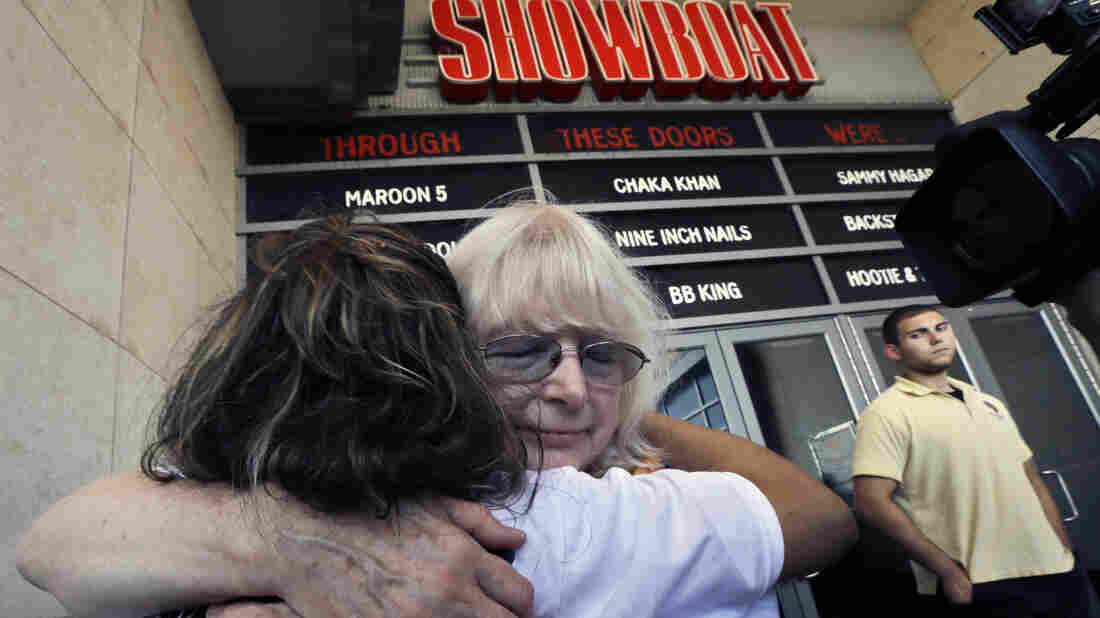 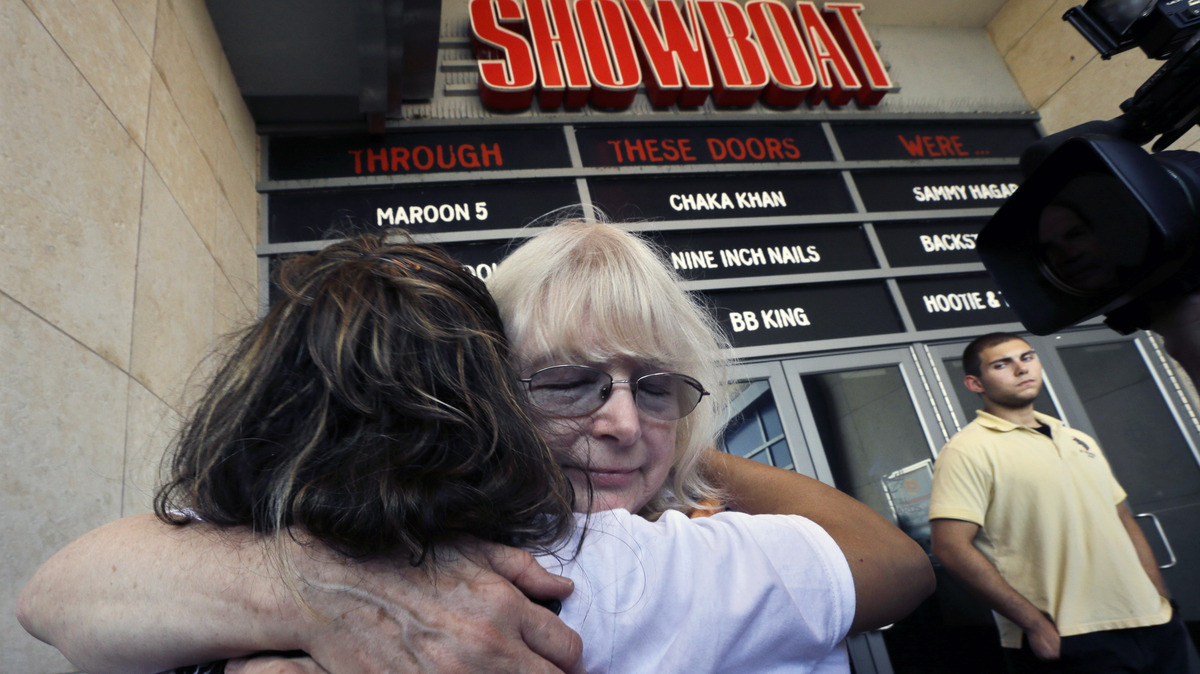 Long time employees Denise Miller, facing camera, and Gloria Panameno hug as they leave the Showboat Casino Hotel on Sunday. Owner Caesars Entertainment closed the still-profitable Showboat to reduce the number of casinos in Atlantic City, which has been struggling with plunging revenue.

The show is over for the Showboat Casino Hotel.

The Mardi Gras-themed casino shut down Sunday after 27 years on the Atlantic City Boardwalk. It was one of three casinos closing within the next two weeks as Atlantic City deals with the impact of increasing competition from casinos in neighboring states. Revel will begin a two-day closing Monday, and Trump Plaza is closing Sept. 16.

One of the final songs piped in over the Showboat's loudspeakers: Queen's "Another One Bites The Dust."

"We're all feeling a little betrayed," Showboat cook Curtis Wade said. "We're all walking around in a fog today. We worked really hard to try to keep it operating, and we're still profitable. We still don't understand why we were the one targeted to close, and nobody has given us an answer on that. There are too many jobs being pushed out of Atlantic City due to corporate greed."

Wade will be among the thousands of workers showing up at the Atlantic City Convention Center on Wednesday for a mass unemployment filing.

The Showboat's owner, Caesars Entertainment, closed the still-profitable casino to reduce the number of casinos in Atlantic City, which has been struggling with plunging revenue and increased competition in the saturated northeastern U.S. casino market.

Caesars Entertainment CEO Gary Loveman wrote in a letter to employees that the Showboat has been in business in Atlantic City for 27 years and Caesars was proud to operate it for 16 years.

"I want to thank the Showboat Atlantic City team for their dedication, professionalism, and commitment to our guests — both throughout the years and especially over the past several weeks," he wrote.

Ruth Ann Joyce, who worked at Showboat as a bartender since the day it opened on March 30, 1987, was bitter on its last day.

"For 36 years (Atlantic City's casinos) were the cash cow," she said. "Now you're just going to kick us to the curb?"

She urged potential buyers to take a chance on the Showboat — as long as Caesars doesn't put the same kind of deed restriction prohibiting a new owner from running it as a casino as it has with two recent sales of former casino properties.

Outside the Showboat, a security guard who had been preventing would-be customers from entering was greeted by a longtime customer who came to say goodbye and ask how the guard was doing.

"I got a job at ShopRite," the guard replied.

More than 470 of the Showboat's 2,000-plus workers are transferring to other casinos the company owns in New Jersey or in other states.

The Showboat was designed as a New Orleans-style riverboat casino with a Mardi Gras theme. It even had a bowling alley for folks who needed a break from the slot machines and table games.

Kurt Williams, of Seaville, was a young boy when his family took him to the Showboat soon after it opened.

"There was a fun vibe to the Showboat, especially for a wide-eyed young kid like me at the time, and it was the only resort in town that had a bowling alley," he said. "It's really a shame all these resorts are going belly up, and I feel awful for the surrounding communities and the families it will affect."

Elizabeth Scarnati, of Cortland Manor, New York, is still excited about a $12,000 jackpot she won last year playing slots at the Showboat.

"I always loved this little casino, especially those suites in the Bourbon Tower," she said. "I was lucky enough to stay in the one on the top floor, oceanfront, with the wraparound balcony. I will miss the Mardi Gras casino a lot."

Atlantic City began the year with 12 casinos, but before summer is over it will be down to eight. Nearly 8,000 casino workers will have lost their jobs.