Accessibility links
Book Review: 'Acceptance' By Jeff VanderMeer Jeff VanderMeer's Southern Reach trilogy comes to an end with Acceptance; reviewer Jason Sheehan says it's a maddening, fascinating read that will stay with you long after you finish the last page.

Accepting The Strange Brilliance Of 'Acceptance'

Accepting The Strange Brilliance Of 'Acceptance' 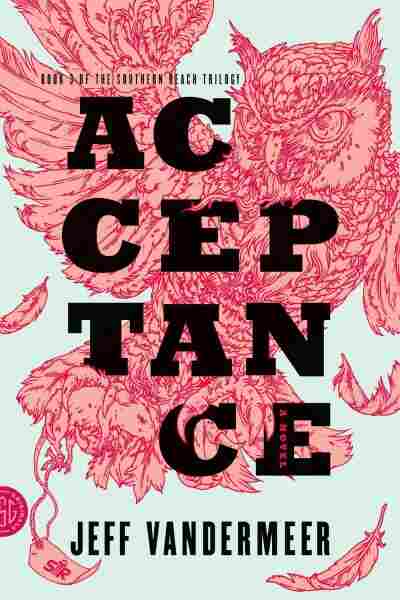 We have to backtrack a little here, right at the start.

Acceptance, book three in Jeff VanderMeer's Southern Reach trilogy, is hitting the shelves soon, and I want very badly to talk about it. But before I can do that, I have to talk about the first two books. To set the scene, as it were. To make any of this make any kind of sense, because Southern Reach is not the kind of series where you can just drop in at book two or three and have any idea what's happening. VanderMeer doesn't coddle dilettantes. He rewards the dedicated.

In Annihilation, book one in the trilogy, a team of explorers enters the mysterious Area X. There is the sense, right from the start, that they are a kind of sacrifice. That they are going in — entering through a weird door, into an evolving disaster of undefinable dimensions — because the only other option is to not go. To leave this strange anomaly that has popped up on the East Coast of the United States unexplored and unknown. And human beings don't do that. We can't not go. If there's a creepy lighthouse or an anomalous hole in the ground (both of which are present in Area X), we have to go and take a look for ourselves.

In book two, Authority, we meet the Southern Reach — the shattered, infected, doom-struck government agency tasked with investigating Area X and sending expedition after expedition across the border, through the door, and into a place that none of them understands. The Southern Reach has spent years attempting to solve the riddle of Area X. And it has failed utterly. Failed to suss out even the most basic truths — why it is here, where it came from, what it is for — and has gained nothing but useless samples, confusing videos treated like holy relics, jealously guarded top-secret memos.

If the guys who wrote 'Lost' had brought H.P. Lovecraft into the room as a script doctor in the first season, the Southern Reach trilogy is what they would've come up with.

Authority ostensibly follows the new Director of the Southern Reach through his first days on the job and the interrogation of the Biologist — the sole "survivor" of the expedition described in book one. But it really isn't about that at all. That's just what happens. What it is about is the building of dread — the slow accretion of things going just a little bit wrong-er than they should. Of men and women already so broken by the past that they appear collectively blind (or willfully ignorant) to the rot spreading around them — until a moment comes that shatters the entire world with a whip-crack suddenness you never see coming — because, like the characters at the heart of Authority, you have become inured to the terrible things happening all around you.

Then comes Acceptance, book three, which is at different times the best haunted lighthouse story ever written, a deeply unsettling tale of first contact, a book about death, a book about obsession and loss, a book about the horrifying experience of confronting an intelligence far greater and far stranger than our own, and a book about sea monsters.

And at this point, you have to make a choice. You can stop reading this review right now and just go out and buy the books — all three of them, right now — and read them, back to back to back. If you need an incentive, let me say this: If the guys who wrote Lost had brought H.P. Lovecraft into the room as a script doctor in the first season, the Southern Reach trilogy is what they would've come up with.

Because your only other option right now is to keep reading this review and accept the fact that, from this point on, I'm going to spoil the hell out of this last book. There is just no way to talk about Acceptance that doesn't involve giving something away. There is no way to talk about it that doesn't involve an honest admission that, days and weeks later, you're still thinking about it and still picking it apart in your brain and still more than a little bit annoyed that it didn't conclude so much as just end. In death, yes. In destruction. With the breath and pulse of monsters echoing in your ears, and the haunting feeling that you must've missed some vital piece or plot detail somewhere back among all those words that would make the end feel more complete.

But you didn't. VanderMeer is trying to pull off a delicate trick here, trying to tell a story that's not about knowing and understanding (which is what all books by rational, non-insane people are basically about), but about the impossibility of knowing and the failure of human language and intelligence to encompass something that is completely and totally alien to us.

"Perhaps so many journals had piled up in the lighthouse," VanderMeer writes, "because on some level most came, in time, to recognize the futility of language. Not just in Area X but against the rightness of the lived-in moment, the instant of touch, of connection, for which words were such a sorrowful disappointment, so inadequate an expression of both the finite and the infinite."

Bold words for a dude writing a book, right? But also the main point of the tale. The world is what the world is. Talking about it is weak light compared to the experience of it. And, ultimately, pointless. Three books in, and we will never know what Area X is, where it truly came from, what its purpose is. There are no words to speak of things beyond the comprehension of the human mind, nor to experience something so truly alien as Area X.

Warning: This is just my read, and I could be dead wrong. I could get a letter from Jeff VanderMeer tomorrow saying, "Hey, dummy. Just read your review, and my book is about puppies. Thanks for getting it all wrong, jerk." But I don't think that's going to happen.

'Acceptance' ... is at different times the best haunted lighthouse story ever written, a deeply unsettling tale of first contact, a book about death, a book about obsession and loss, a book about the horrifying experience of confronting an intelligence far greater and far stranger than our own, and a book about sea monsters.

If the first book in the series was about exploring Area X and what it does to the explorers, and the second book is about what it does to those who command the explorers, then the third book is about coming, finally, to accept that there are no explanations for Area X. That Area X is the projection — through time, through unfathomable distance — of some alien operator whose motivations and purpose are as unknowable to man as man's motivations and purpose are to an ant.

When you get to the end yourself and see that this is the conclusion that VanderMeer has come to after hundreds of pages — you're going to be angry. You're going to feel cheated out of the catharsis that is supposed to come with finishing a great series of books. But I advise you to just roll with it. Have a drink if you must. Seethe quietly and internally and know that, as the days pass, the book will hang with you. It will haunt you, passages coming to you while you walk down the street or sit on the train. You will work through the multiple perspective, character and voice shifts and, slowly, accept that Acceptance is maybe the truest title ever given a book.

Jason Sheehan is an ex-chef, a former restaurant critic and the current food editor of Philadelphia magazine. But when no one is looking, he spends his time writing books about spaceships, aliens, giant robots and ray guns. Tales from the Radiation Age is his newest book.

Read an excerpt of Acceptance