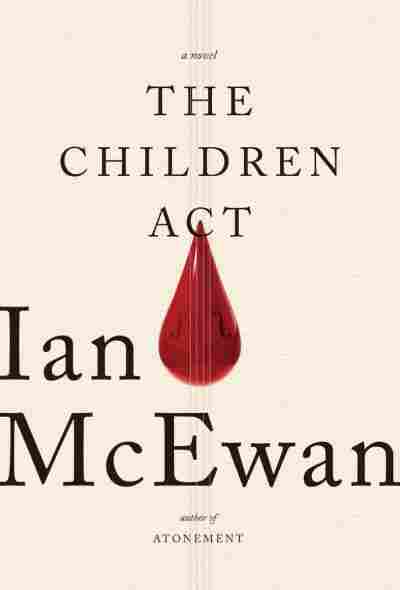 Ian McEwan's novels tend to be so well-made that they ought to come with a literary equivalent of the Good Housekeeping Seal of Approval. You know you never have to worry about the writing; it's always first-rate. And the structure of a McEwan novel tends toward near-perfection too, with careful attention paid to the shape — and shapeliness — of the book. And you always feel the whole thing was put together by an unusually sharp intelligence. So when reading a novel by McEwan, you can probably take for granted that all of that will be in place.

What also frequently characterizes his books is the emphasis on a single, central event and its echoing consequences. That's true again now of The Children Act, a short, concise, strong novel in which a judge's ruling decides the fate of a teenage boy in ways she never intended or imagined.

But what's different here is that McEwan has, surprisingly, taken on a fairly familiar ripped-from-the headlines question: Who gets to decide the fate of a teenage boy with leukemia, whose family happens to be Jehovah's Witnesses, a religion that forbids the blood transfusion he desperately needs to stay alive?

But this being McEwan, the novel bears little resemblance to any newspaper article, Lifetime TV movie, or "issues" novel written by a more ordinary writer. Instead, though McEwan has described to the press parental decisions to let children die because of religious beliefs as "utterly perverse and inhumane" — what makes this book fine and masterful, what makes it a McEwan novel, is the human dimension revealed by the legal dilemma at hand.

Fiona Maye is an English judge of 59 whose husband comes home one evening to announce that because of the current state of near-sexlessness in their long marriage, he is considering having an affair, and he wants her blessing. Shocked and furious, she tells him to leave. This disturbance takes place on the very same night that Fiona has been presented with the Jehovah's Witness case. She decides that she needs to meet Adam, the critically ill 17-year-old refusing treatment, in order to rule on whether he is mature enough to understand all the ramifications of his momentous refusal.

I wasn't entirely comfortable with McEwan's long description of Fiona's childlessness, which seemed to run along familiar career-woman lines. But as usual he has done his legal, medical and ethics homework, and it was the only part of the book that didn't feel true.

When we meet the real, in-the-flesh Adam, as opposed to hearing about the paper description of him from the court briefs, the novel soars. "It was a long thin face, ghoulishly pale, but beautiful," McEwan writes, "with crescents of bruised purple fading delicately to white under the eyes ..." And a little later, "Then, as the door swung closed behind her with a pneumatic sigh, she gathered he was telling her how strange it was, he had known all along that she would visit him."

From the moment of this meeting, the novel seems guided by an elegant geometry. The pain of the faltering marriage is replaced with the tensions of the intensity between a middle-aged, distinguished female judge and a dying, sensitive boy. From this point on, the previously cool British novel, tightly constructed and insightfully written, enters the realm of passion and becomes memorable.

At 221 pages, this is one of McEwan's short novels, lacking the luxurious sprawl of Atonement, which many consider his masterpiece. Instead, it's a book that begins with the briskness of a legal brief written by a brilliant mind, and concludes with a gracefulness found in the work of few other writers. And in the end, it left me with a very particular reassuring feeling. I couldn't help but feel: Ian McEwan, I'd know you anywhere.

Meg Wolitzer is the author of The Interestings. Her YA novel, Belzhar, will be published in September.