Accessibility links
How Dolph Lundgren Went From Chemical Engineer To Action Star Before he was Ivan Drago or He-Man, Lundgren was just another 6-foot-5-inch Swede with a black belt in karate and a degree in chemical engineering — who turned down a scholarship to MIT for showbiz. 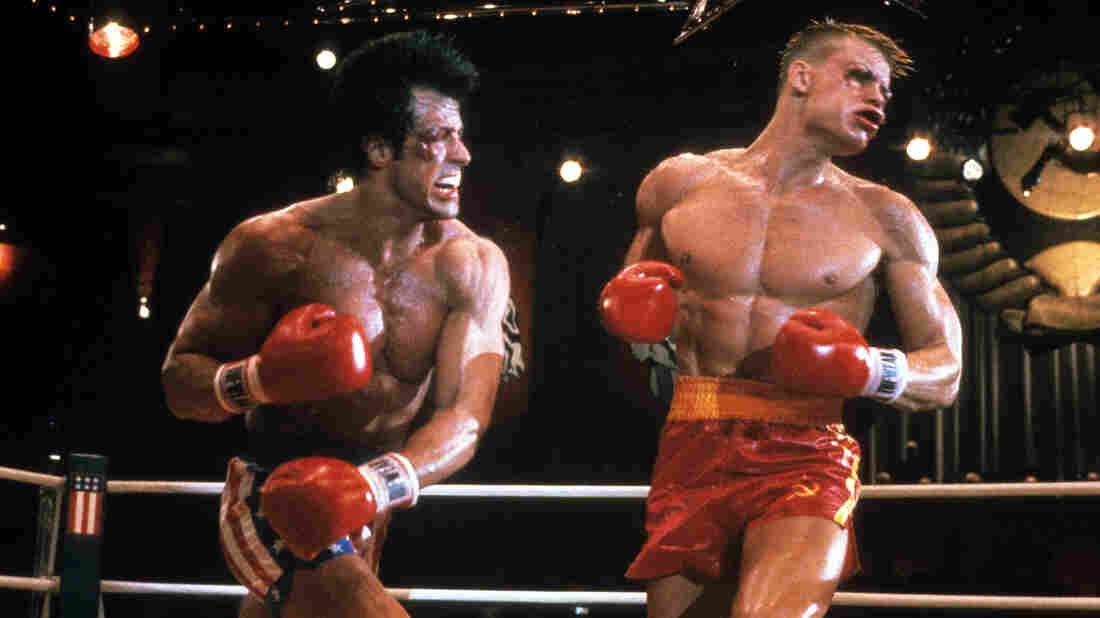 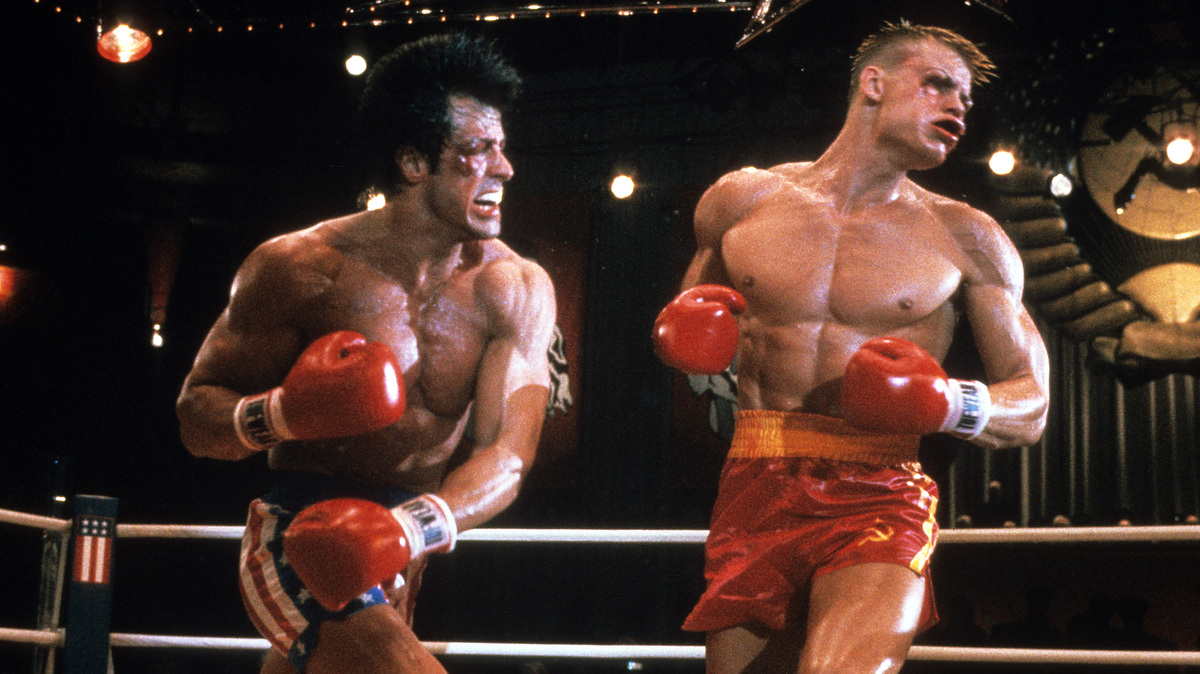 Dolph Lundgren's performance in Rocky IV as Ivan Drago —  the "blond beast with flatiron hair and perfect muscles," as one critic wrote —  made a big impression on American audiences

Before he was Ivan Drago, He-Man or an "Expendable," Dolph Lundgren was just another 6-foot-5-inch Swedish male model with a black belt in karate and a degree in chemical engineering.

As even a brief reading of his biography might suggest, Lundgren, 56, has taken an unexpected, winding path to success. But it all started with his starring role in Rocky IV, as the menacing Soviet boxer Ivan Drago.

As he tells NPR's Arun Rath, it was the role that changed his life. And he wouldn't have gotten to that silver-screen spotlight if he hadn't taken a gig as a bouncer — and stumbled upon romance. 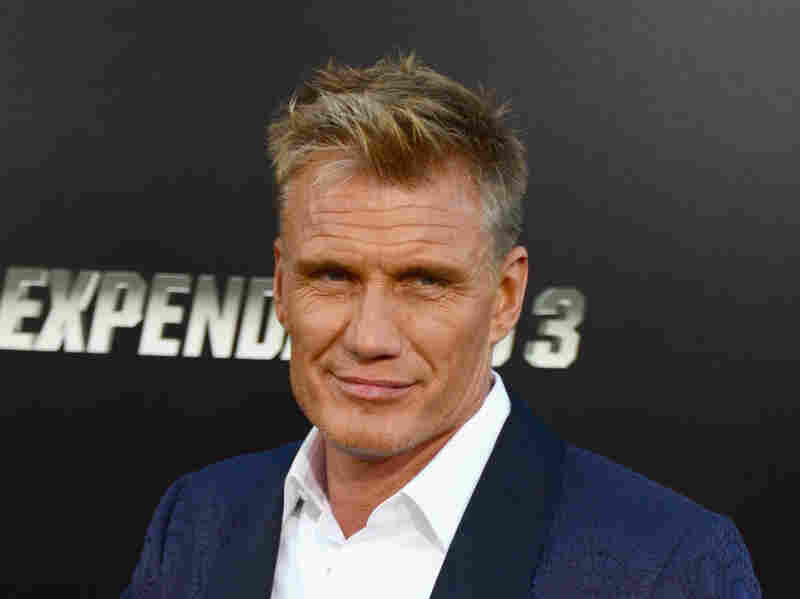 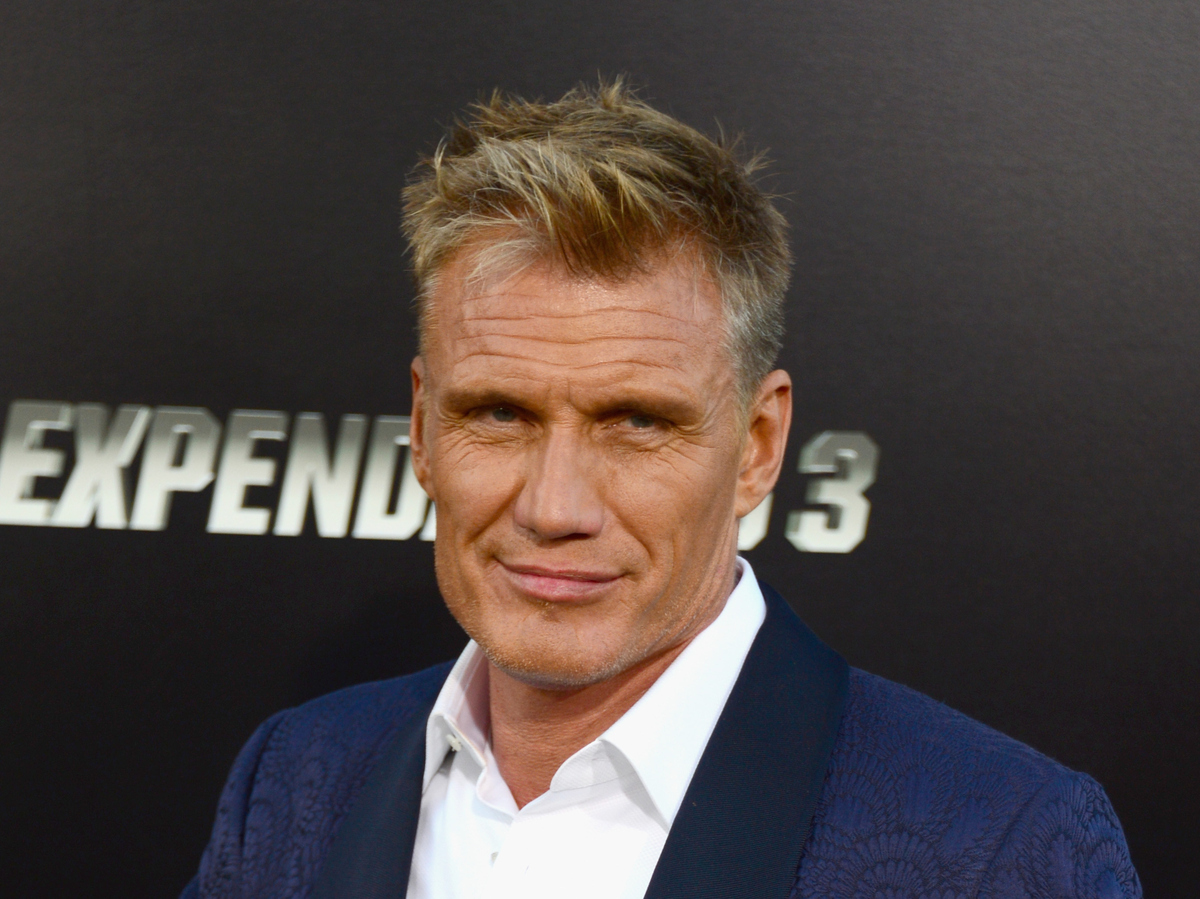 Lundgren attends the premiere for The Expendables 3 in Hollywood.

A Childhood In Sweden, And Dreams Of America

The movie star "Dolph" Lundgren was actually born Hans Lundgren. (He took on the name Dolph, a relative's name from his mother's side of the family, with the release of the Rocky film in 1985.) He grew up largely in and around Stockholm, and excelled in school from an early age.

"I had some allergies when I was younger," Lundgren says, and, as a result, "I wasn't very good at sports. So my kind of way to feel like I was somebody was to answer all the questions the teacher asked."

From early on, Lundgren also dreamed of going to the United States, but, he says, his family couldn't afford to send him: "So the way to get there for me was to get academic scholarships."

Lundgren's aptitude for chemical engineering propelled him to scholarships around the world. There was Washington State University, Clemson University, Sweden's Royal Institute of Technology, the University of Sydney in Australia and, ultimately, a competitive Fulbright scholarship to attend MIT.

But that was all before Lundgren met Grace Jones.

A Taste Of Show Business

While in Australia, Lundgren, then a competitive martial artist, got a job as a bouncer through a friend of a friend. That meant he provided security at concerts for artists like Joan Armatrading, Dr. Hook and Grace Jones.

"I was assigned to [Jones'] dressing room," Lundgren recalls. "I think she spotted me out there. And I was just a Swedish kid, I didn't know anything. And I think she kind of liked me."

A night of partying after Jones' show led to a four-year romance and a major course correction on Lundgren's trajectory toward MIT.

Jones — who was famous not just for her music, but also for her acting and modeling — took Lundgren to New York, where they partied at the legendary Studio 54 and Andy Warhol took pictures of Lundgren. Jones introduced Lundgren to the world of show business.

Meanwhile, Lundgren was still set to begin his Fulbright scholarship at MIT.

"I started sort of thinking, 'Wow, this is kind of cool,' " Lundgren remembers: " 'I don't know if I want to go back to engineering after this.' "

Lundgren remembers making the trip from New York down to MIT's campus in Cambridge, Mass., riding on a big, black Yamaha motorcycle with Grace Jones behind him.

"The professors are waiting for the star student from Sweden," Lundgren says, "and then they see me ride past outside the window with Grace Jones in the back, all decked out in leather. They probably didn't know what was going on."

After his exposure to show business and the arts, it took only a few weeks for Lundgren to rethink his academic goals, quit the program and return to New York.

"I just knew it wasn't right," he says. Instead of studying engineering, he started studying acting.

The movie role that changed Lundgren's life almost went to someone else.

When the then-unknown actor went to a "cattle call" audition for Sylvester Stallone's Rocky IV, a casting agent dismissed Lundgren as "too tall."

But given his own aptitude for martial arts and his love for the film series, he says, he couldn't miss the opportunity for a role in the franchise.

So he took photos of himself in boxing gear, and sent them through a series of connections to Stallone.

It happened in like 90 minutes. I went from a total nobody, basically, to Dolph Lundgren, movie star.

Eventually, while back in Sweden, Lundgren got the call to meet with Stallone in Los Angeles.

After meeting Stallone, training for months and going through a screen test, Lundgren landed the role as the villain in Rocky IV, the towering Soviet boxer Ivan Drago.

Lundgren remembers the premiere of the film in November 1985 as a pivotal moment in his career.

He walked down the red carpet with Grace Jones, still his girlfriend at the time, and "everybody's taking pictures of her," he says, "and I'm kind of there like her boy toy."

But after the audience watched the film, Lundgren says, everything changed.

"I remember coming out onto the street, and suddenly people are taking pictures of me, and not Grace," he says.

"It happened in like 90 minutes. I went from a total nobody, basically, to Dolph Lundgren, movie star."