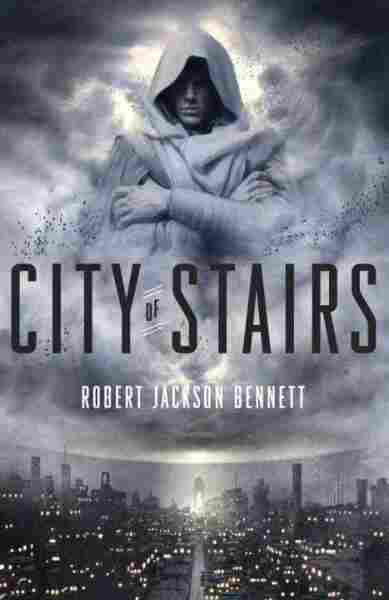 On the Continent, no one is allowed to talk about their gods. No one can display their signs or symbols. They certainly can't be worshipped. No one is even allowed to know the history of the Divinities who once walked among the people, performing miracles left and right, though scrubbing the memory of such things from a city, a continent and a people is not quite as easy as passing laws that make the dead gods verboten.

Particularly when the dead gods in question might not in fact be, you know, actually dead.

This is the setup for Robert Jackson Bennett's newest book, City of Stairs. Bulikov, center of Continental government, was once the most prosperous and powerful city in the world. With a direct hotline to the miraculous, the Continent ruled the world — oppressing all others whom the Divinities had ignored. And this went on for a very long time, until one of those oppressed nations figured out a way to do the impossible (or at least the highly improbable): They discovered a weapon that could kill a god. And then they used it.

City of Stairs begins a generation later — in a Bulikov that has been reduced to abject poverty and dependence. When the Divinities were killed (or fled), they took with them all their protections and miracles, leaving the chosen people bereft and floundering in their absence and the small, militaristic island nation of Saypur (the victors in the war) as the new colonial power. There are rules and regulations that suppress all knowledge of the long-gone Divinities, and there are those who chafe under such laws. Thus, conflict — ripe and waiting.

But here's the thing — City of Stairs is one of those books that's tough to get into. It opens, rather inexplicably, with the trial of a shopkeeper charged with displaying an illegal symbol on his hat shop. It is a scene most notable for the extraordinary boredom expressed by all the characters involved as they wade through legal minutiae. They yawn, they doodle, they think to themselves how they can't wait for this all to be over as Bennett rolls out name after unrecognizable name and explains the framework of the Saypuri legal system (at some length). The boredom of the characters becomes the boredom of the readers and, three times, I put the book down and went off to read something else.

Granted, I also came back, drawn by something about City of Stairs, even in those interminable opening pages, which glittered fitfully beneath the heavy front-load of a chapter-one info dump. It was the shine of a wholly and fully realized world. The hard gleam of competence coming from a writer who knows what he's doing, where he's going and just exactly how to get there.

Bennett is plainly a writer in love with the world he has built — and with good cause. It's a great world, original and unique, with a scent and a texture, a sense of deep, bloody history, and a naturally blended magic living in the stones.

But still, a hat shop? A dozen pages of dull legal proceedings? When the whole opening trial comes to a crashing halt with word that yet another character with a funny name has been found beaten to death in his office, there was an instant when I thought, "Well, lucky him. At least he doesn't have to sit through any more of this."

A funny thing happens at that point, though. Bennett the writer exits the premises and Bennett the storyteller enters. Suddenly, we are somewhere different, out on the streets of Bulikov on a foggy night with a train arriving from the east, bearing mysterious visitors. A tiny woman who is probably a spy. Her enormous, one-eyed bodyguard. Suddenly there is tea to be drunk and dull diplomats to be fired. Suddenly City of Stairs starts to read more like Fritz Leiber or a great Rudyard Kipling story of the Raj, and less like the minutes of a Decatur, Ill., city council meeting. Suddenly, the pages are whipping by, 50 at a clip as mysteries are uncovered, miracles happen and assassins begin scaling the walls.

It doesn't maintain this momentum completely, but Bennett is plainly a writer in love with the world he has built — and with good cause. It's a great world, original and unique, with a scent and a texture, a sense of deep, bloody history, and a naturally blended magic living in the stones. Wanting to explore its strange corners (and, particularly, wanting to explore it with Shara the Spy and Sigrud the Bodyguard, who've got all the modernist magnetism of a post-feminist Fafhrd and the Gray Mouser) was enough to keep me reading through the laggy parts.

I was just thankful that none of the multiple, thread-tying denouements following the primary, action-movie ending took place in a courtroom. And that no one, by the end of the tale, was the least bit concerned with what the hat maker was doing.