Accessibility links
Obama Wants Congress' Support On ISIS, But He May Not Need It Congressional leaders will be at the White House on Tuesday to talk about the president's strategy against the group known as the Islamic State. 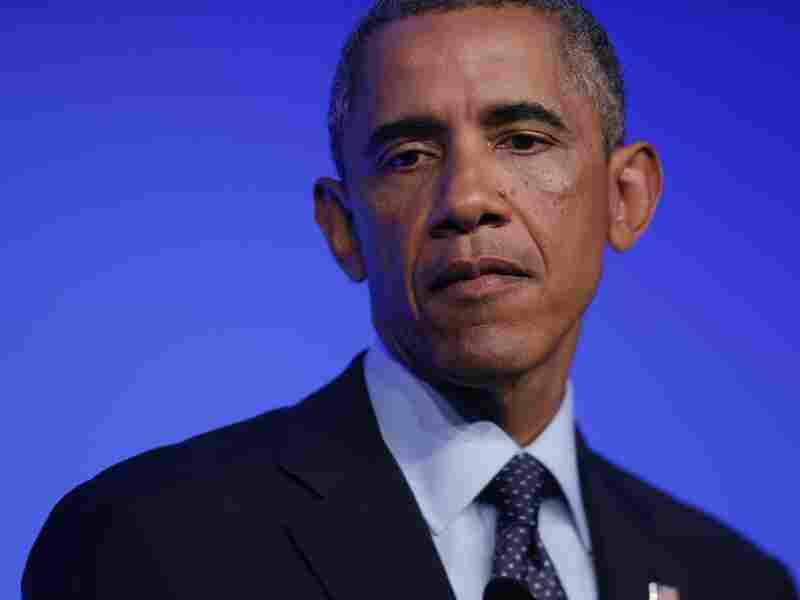 President Obama will address the nation Wednesday to present his strategy against the Islamic State. Charles Dharapak/AP hide caption

President Obama will address the nation Wednesday to present his strategy against the Islamic State.

The top four congressional leaders will be at the White House today to talk to President Obama about U.S. military action against the group known as the Islamic State, or ISIS. This comes just one day before Obama will address the nation and lay out his strategy for dealing with the extremist group.

The president says he wants congressional buy in, but "buy in" can mean a lot of things.

"I'm confident that I've got the authorization that I need to protect the American people. And I am always going to do what's necessary to protect the American people," he said Sunday on NBC's Meet the Press. "But I do think it is important for Congress to understand what the plan is, to have buy in, to debate it, and that's why we've been consulting with Congress throughout."

What the president actually needs from Congress is also squishy. Stephen Biddle, professor of political science and international affairs at George Washington University, says Congress could be asked for legal authorization to wage war, or money to conduct operations. But, he adds, "I don't think they need to go to the Congress for money and I don't think they're inclined to go to Congress for some kind of declaration of war or new authorization for the use of force or anything of that kind."

As for money, House Appropriations Committee staff say there's currently enough set aside to handle ongoing operations. So, what does the president want from Congress? It seems, something along the lines of moral support.

"The president's attitude is probably the more the better. But the worst thing would be to ask for something specific and get rebuffed," says James Dobbins, senior fellow at the Rand Corp. He expects that in Wednesday's speech, Obama will ask for congressional support. But he doubts the president will get specific or require it for further action against the Islamic State.

"I don't think the president will try to establish a criteria for this in his speech, because then it's just a hostage of fortune. If you fall short of that, even if you fall just slightly short of it, you appear to have suffered a rebuff," he says.

This time last year, in very different circumstances, Obama asked for a congressional blessing to bomb Syria over the use of chemical weapons. It became clear the congressional support wasn't there, and ultimately diplomacy gave him an out. This time around there appears to be bipartisan support for the current limited campaign of airstrikes in Iraq. But some critics are pushing for more intervention — even possible airstrikes in Syria or special forces operations on the ground.

California Democratic Rep. Adam Schiff wants the president to ask for Congress to authorize continued use of force in Iraq. But, he says, "I can see his hesitation. With a Congress this dysfunctional, you never know what you can get and so he clearly doesn't want to put all his eggs in the basket of congressional approval. ... If not on this I don't know what the Congress can be counted on to do."

Schiff serves on the House Intelligence Committee and says even if the president doesn't ask — and he doesn't expect him to — Congress could on its own pass a war power authorization. Schiff expects that in the White House meeting today with congressional leaders, Obama will be getting a reality check about just what these leaders think is possible.