The Video, The Tabloid Site And The NFL's Unwanted Reckoning

The Video, The Tabloid Site And The NFL's Unwanted Reckoning 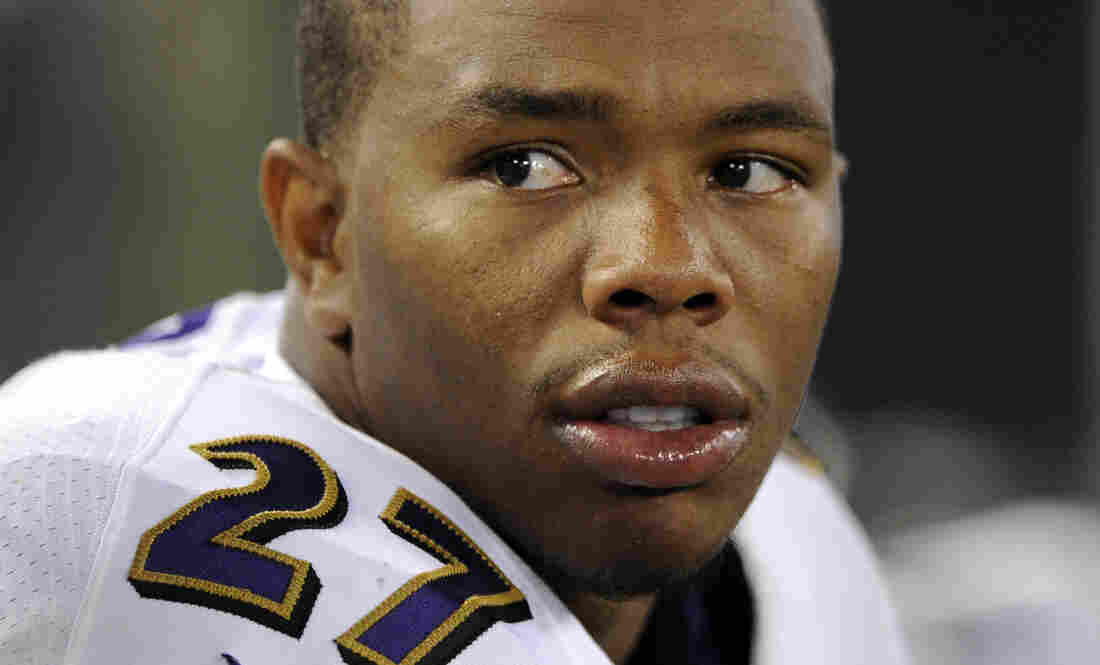 Ray Rice has been cut from the Baltimore Ravens and indefinitely suspended from the NFL following an assault on his then-fiancee, Janay Palmer. Nick Wass/AP hide caption

The NFL built its fortunes on a series of ever-expanding TV contracts worth billions of dollars showing hundreds of games to tens of millions of fans. Now a tabloid news shop has brought all conversation about the NFL to a standstill by posting a silent video lasting less than four minutes.

In fact, by showing footage on Monday of Baltimore Ravens star Ray Rice knocking his then-fiancee (now wife) unconscious with a single blow in an elevator, TMZ shattered the NFL's efforts to manage its crisis of recurrent violent abuse of women by players.

Today, in a new story, TMZ suggests NFL officials never saw that video from February because they didn't want to see it. Historically imperious and unaccustomed to yielding to public opinion, the NFL no longer holds the moral high ground to convince people otherwise.

More than one commentator wrote this math equation on Twitter: "TMZ > NFL." Easy to understand why, especially after TMZ's earlier coup in obtaining audiotapes of then-Los Angeles Clippers owner Donald Sterling making racially charged remarks to a friend. He was compelled by the NBA to sell the franchise.

In this case, the video defined the story. It's how we remember the jubilance surrounding the fall of the Berlin Wall. It's why jihadists with the self-proclaimed Islamic State stage-manage beheadings as propaganda footage for consumption on social media platforms. The presence of television cameras turns some court cases into national stories, and even media circuses, while their absence transforms others of greater import into sideshows.

For any sentient viewer, actually seeing Rice deck Janay Palmer had to shut down any claim in a barroom, boardroom or courtroom that somehow, in some way, she had brought that violent blow upon herself.

During what looked like an argument, the professional athlete simply decked her, knocking her into a handrail inside the elevator car. She fell to the floor and did not get up. A law enforcement official provided a higher-quality version of the video, with audio, to a reporter for The Associated Press. After reviewing the video, the reporter wrote that the two were "shouting obscenities at each other, and she appears to spit at Rice right before he throws the knockout punch."

Even before Monday's posting of the public video, the consequences appeared light. Prosecutors in New Jersey diverted Rice to a program for first-time offenders. The NFL initially suspended him for two games. This summer, after an outcry, NFL Commissioner Roger Goodell made a public mea culpa and set out tougher guidelines for handling future domestic violence by players or other league employees.

TMZ had posted a video in February showing the aftereffects of the assault. Once TMZ posted the second video, public reaction cut even more sharply against Rice and the league.

Many prominent sports journalists started questioning not just Rice but figures at the top of the NFL, including Goodell. The Washington Post's Sally Jenkins accused the league of willful blindness. ESPN's Keith Olbermann called for his resignation, perhaps not a surprise, as Olbermann has done so before. ESPN's Mike Lupica, in his column for the New York Daily News, raised pointed questions as well. ESPN's Jason Whitlock says Goodell failed. It is worth noting that ESPN is a major business partner of the NFL, paying close to $2 billion annually for the right to broadcast games.

One of the aberrant reactions could be found on Fox News' Fox & Friends, where host Brian Kilmeade, a former sports broadcaster, joked that the lesson of the release of the tape of the attack was to "take the stairs." Co-host Steve Doocy chimed in to say the lesson was there's always a camera in the elevator. On Tuesday, after an outcry, Kilmeade explained that the program took domestic violence seriously. Notably, he did not apologize.

The Ravens took the incident more seriously: It cut Rice from the team. The NFL suspended him indefinitely.

In a sense, the surprise is in the surprise. People could not argue they did not already know how bad Rice's actions were. The video posted by TMZ in February showed him dragging Palmer's limp body out of the elevator at the hotel in Atlantic City; he had pleaded guilty to aggravated assault; none of the fundamentals could be in doubt.

TMZ has not disclosed how it acquired the video, though it said it had sources at the hotel and has paid sources in the past. Such payment would break the standards and ethics policies of most mainstream U.S. news organizations, but it is a common practice for tabloid publications. (U.S. television networks have periodically paid sources in major stories for videotape or photographs, which some veteran producers privately concede is a way to get around prohibitions on paying subjects of stories for the chance to interview them.)

TMZ, which has a website and an arm that produces television shows, traffics in gossip and dysfunction about celebrities — often violating what one might consider their personal privacy, and many definitions of human decency to boot.

But right now TMZ is basking in praise for forcing a reckoning on an often-unaccountable institution that happens to be the most profitable sports enterprise in the country — thanks to grainy footage from a closed-circuit camera in a hotel elevator.