Accessibility links
As Visible Villain, Islamic State Alters U.S. Political Calculus For the first time since the killing of Osama bin Laden, the U.S. president has a symbolic figure to rail against — one potent enough to rally the country around. 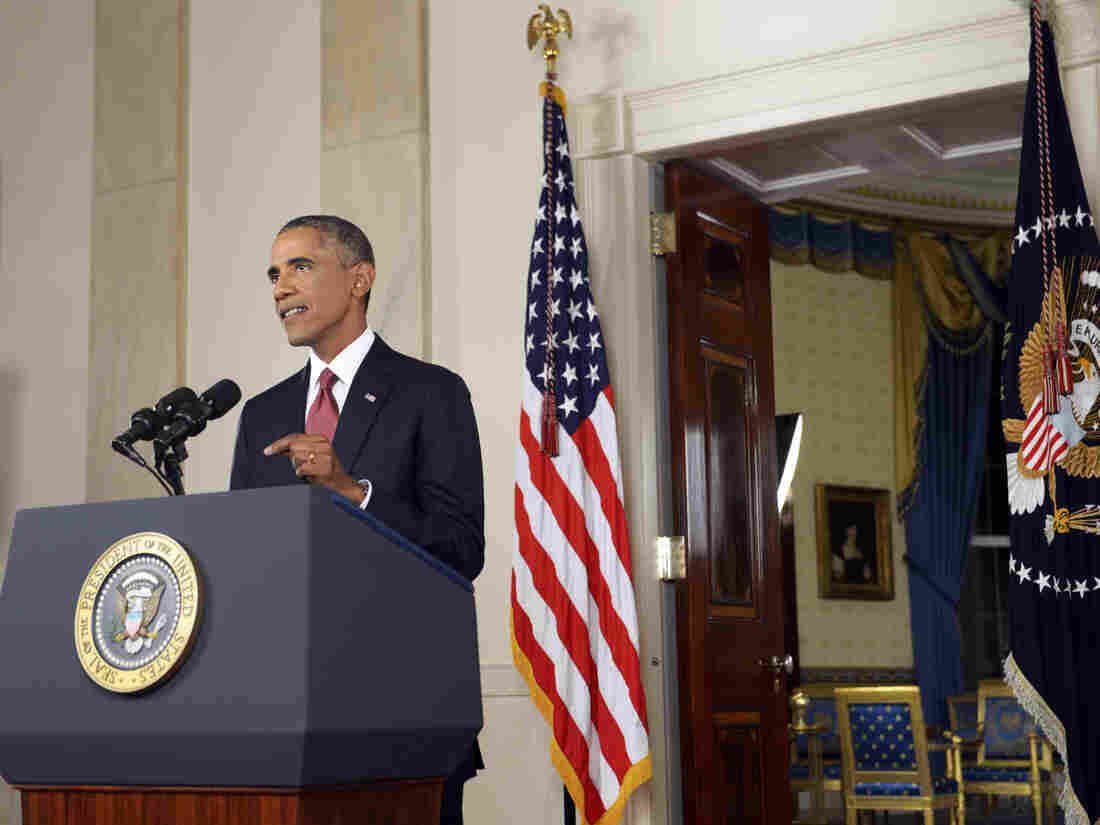 President Obama addresses the nation from Cross Hall in the White House on Wednesday. Opening a new military front in the Middle East, Obama authorized U.S. airstrikes inside Syria for the first time, along with expanded strikes in Iraq as part of a broad mission to root out violent Islamic State militants. Saul Loeb/AP hide caption 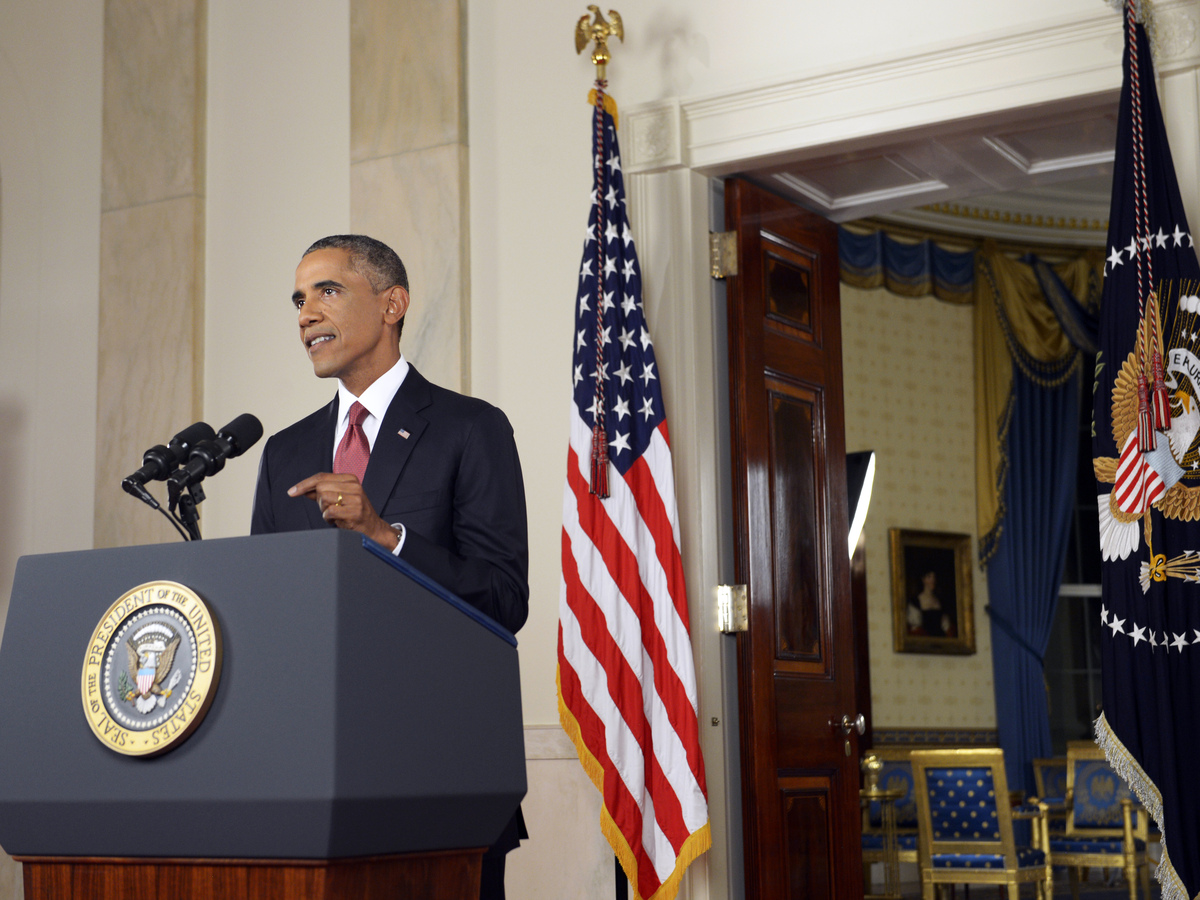 President Obama addresses the nation from Cross Hall in the White House on Wednesday. Opening a new military front in the Middle East, Obama authorized U.S. airstrikes inside Syria for the first time, along with expanded strikes in Iraq as part of a broad mission to root out violent Islamic State militants.

After a decade in national politics as a dove, Barack Obama has become a reluctant hawk.

Obama's long transformation reached its endpoint on the eve of the 13th anniversary of the Sept. 11 attacks. But it came, in the end, because Americans suddenly felt a renewed sense of peril from a terrorist enemy — and a renewed willingness to fight. Both the fear and the resolve were manifest in a flurry of fresh polls showing overwhelming support for new military commitments in Iraq and neighboring Syria.

For the first time since the killing of Osama bin Laden, the U.S. president had a symbolic figure to rail against — one potent enough to rally the country around.

ISIS has been around for years, an offshoot of al-Qaida and a major player in the multifaceted civil war in Syria. But it had not had a clear image in the American imagination until it released videos of its own operatives beheading James Foley and Steve Sotloff, American journalists held captive for months. These dark-clad figures with their medieval methods and talk of "putting the knife to the necks of Americans" have focused our famously distracted national mind in a flash.

Obama made explicit use of this provocation, as the faces of Foley and Sotloff were the only visual used during his presentation.

Now, the next round of fighting in Iraq and Syria will be seen as an American war, and as Obama's war. Even if no U.S. troops see combat on the ground, as the president repeatedly promises, there will be greater use of American air power and logistical support. Where the battle for control and for survival in the region goes now will largely depend, once again, on the force of American arms.

That marks a true turning point for the Obama presidency, a new sense of commitment to military action that repels many of his usual allies even as it compels support from some of his usual antagonists.

All military actions he has ordered before — against the Taliban or bin Laden or al-Qaida or al-Shabab — could be seen as facilitating his essential commitment to ending the War on Terror he inherited from George W. Bush. Every thrust and parry was meant to make withdrawal from Iraq and Afghanistan possible, and to allow a pivoting of foreign policy priorities to other parts of the world.

But that grand design fell apart along with the Baghdad government installed by Bush's administration and supported by Obama's. That regime, led by vengeful Shiites, proved not only ineffective but toxic. It gave rise to ISIS, the most potent form of Sunni Islamist extremism seen to date. And when ISIS broke through the previous lines of battle this summer, racing across Iraq to capture the key northern city of Mosul, it seemed that all the blood spilled and treasure spent in Iraq over a decade was being obliterated in a space of days.

A year ago, when Syrian President Bashar Assad was using poison gas on his own people, Obama came to the brink of beginning a bombing campaign to stop him. He stepped back, in part because Congress resisted and Russia stepped forward to help arrange a deal.

Assad agreed to divest himself of chemical weapons, and Obama seemed relieved to shelve his more aggressive options. Public opinion polls at the time showed only tepid support for more U.S. involvement in the region.

But that was before ISIS became a household name across the Atlantic. It was before ISIS strategists decided it would frighten the Americans off if a couple of hostages were slain. And it was before Barack Obama reached the moment when his hand was forced at last.