Accessibility links
First Listen: Tweedy, 'Sukierae' The Wilco singer and his 18-year-old son Spencer record a 20-song family-band album together. There's not much contrivance, not much high-concept, just a dad and his son bashing out tunes. 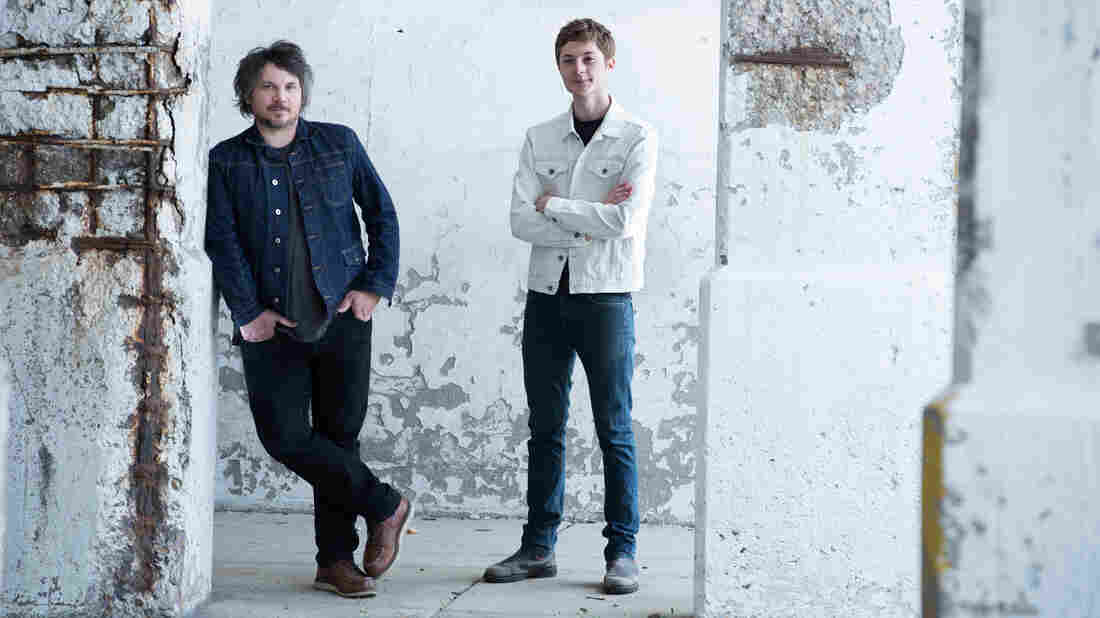 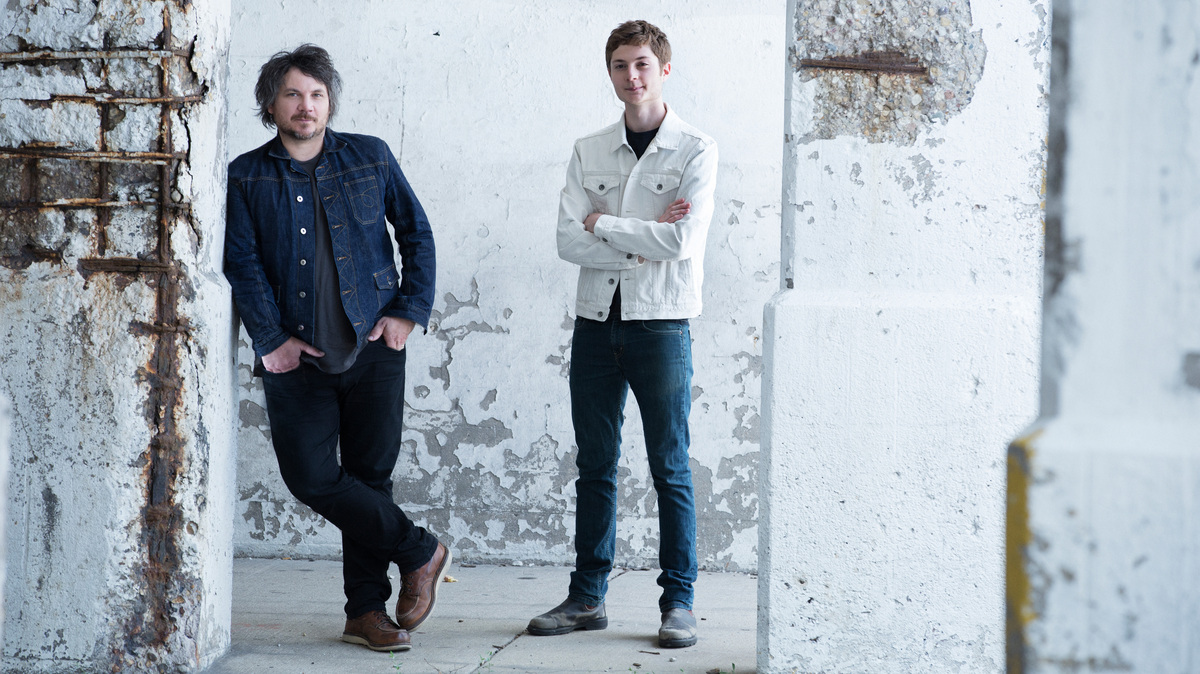 A clue about the scruffy aesthetic of Sukierae arrives at the 2:27 mark of "World Away," one of 20 (!) songs on the first family-band album from Jeff Tweedy of Wilco. Until this point, the tune — a variation on the Bo Diddley beat strummed on acoustic guitar, with Tweedy's sleepy voice distantly implying a blues cadence — has been fairly straightforward.

A new chorus begins in orderly fashion, but before it gets very far, the vocals are eclipsed by unexpectedly menacing electric guitars. All snarls and daggers, these rise from background to foreground like a fast-growing audio fungus, threatening to obliterate everything else. The brief outbreak is followed by a fadeout, but it's not one of those mellow Laurel Canyon-at-dusk affairs; for a while, Tweedy's voice soldiers earnestly on amid the fitful anarchy of razor-wire guitar antics, vying for attention. As the music evaporates, there's the sense that the struggle is ongoing; that if we were magically able to fade things back up, we'd hear Tweedy's incantation "only a world away" further obscured by a spastic lo-fi freakout that hails from three noisy worlds over.

It's brief, this interlude, but revealing. It suggests that Tweedy and his drummer son Spencer, 18, embraced an improvisational, whatever-works ethos during the recording of the thoroughly surprising Sukierae. Jeff Tweedy is known to be somewhat fanatical about the structures, melodies, and other compositional elements of his songs; he's capable of proferring an exuberant and entirely credible update of girl-group pop and then, in the next song, lace up his boots and kick out a punishing update of '70s arena rock. Only it's better and smarter than it would be in virtually any other hands.

Sukierae contains some wry and characteristically compact Tweedy gems. Overall, though, it achieves a rare balance between songwriterly preciousness and reckless, heat-of-the-moment lunges. The songs fall across a range of styles and moods; there are playful soft-shoe numbers in the style of "Mr. Bojangles," and tunes with tricky progressive-rock groove changes, and disarmingly tender moments, too. Many of them have episodes like the one in "World Away" where the universal order is abruptly jumbled. In these moments, when savvy listeners might expect a typical pop-song resolution, there's instead a leap into the unknown. Later, maybe, there's a return to order. And maybe not. The uncertainty acts as a lure, pulling you in to see what happens next.

Jeff Tweedy has described his writing process as a piecing together of fragments, a connecting of disassociated parts. Often, he and Spencer start with a slight riff, then go off exploring with little in the way of an organizing agenda. Sometimes, they hew close to the spirit of the initial idea; sometimes, they wind up in a different time zone. The thrilling "Diamond Light, Part 1" is an example of the latter: It opens with a pulse-pounding drum pattern, then switches to half-time for a shadowy vocal, then unfolds into spectacularly beautiful expanses of instrumental dissonance that show the influence of Wilco lead guitarist Nels Cline. It's not hyperbole to say that in moments like this, the Tweedy band takes more musical chances than any similar father-son or family band in rock history.

Inevitably, Wilco-like turns of phrase are scattered throughout these songs, their verses riddled with inscrutable codes and references. At the same time, Sukierae finds Jeff Tweedy communicating in more direct ways, his words perhaps reflecting what both he and Spencer have described as a low-key music-making process. Other events in the Tweedy household could easily have affected the tenor of the narratives: During the recording process, Sue (Jeff's wife, Spencer's mom) received a complex cancer diagnosis and began treatment. It's always dangerous to speculate about the relationship between real life and song lyrics, but many of these songs go right at big questions about mortality and devotion, honor and commitment, what it means to confront (or even momentarily fret about) the prospect of losing a loved one. Running through these songs are great and graceful affirmations of love, carnal and familial, and right alongside them is pronounced old-soul wistfulness and a healthy dose of doubt. At times, it seems as though Tweedy's at a loss, and can offer little more than his own confusion. Then, at other moments, he's eager to share what he's learned from recent introspection, and his clarity is striking. "It's not how they tell it, it's not how they say," he sings with earnest, breathy intimacy in "Slow Love." "Your heart's in your mind and your mind's in the way."

That's one of the things that's most striking about Sukierae: Its resonance comes from a pronounced ease of expression. There's not much contrivance, not much high-concept, just a dad and his son bashing out tunes. It's the rare chance to follow one of rock's thinkers as he goes off wandering without a map or a professional care about the results — crucially, without his mind getting in the way.